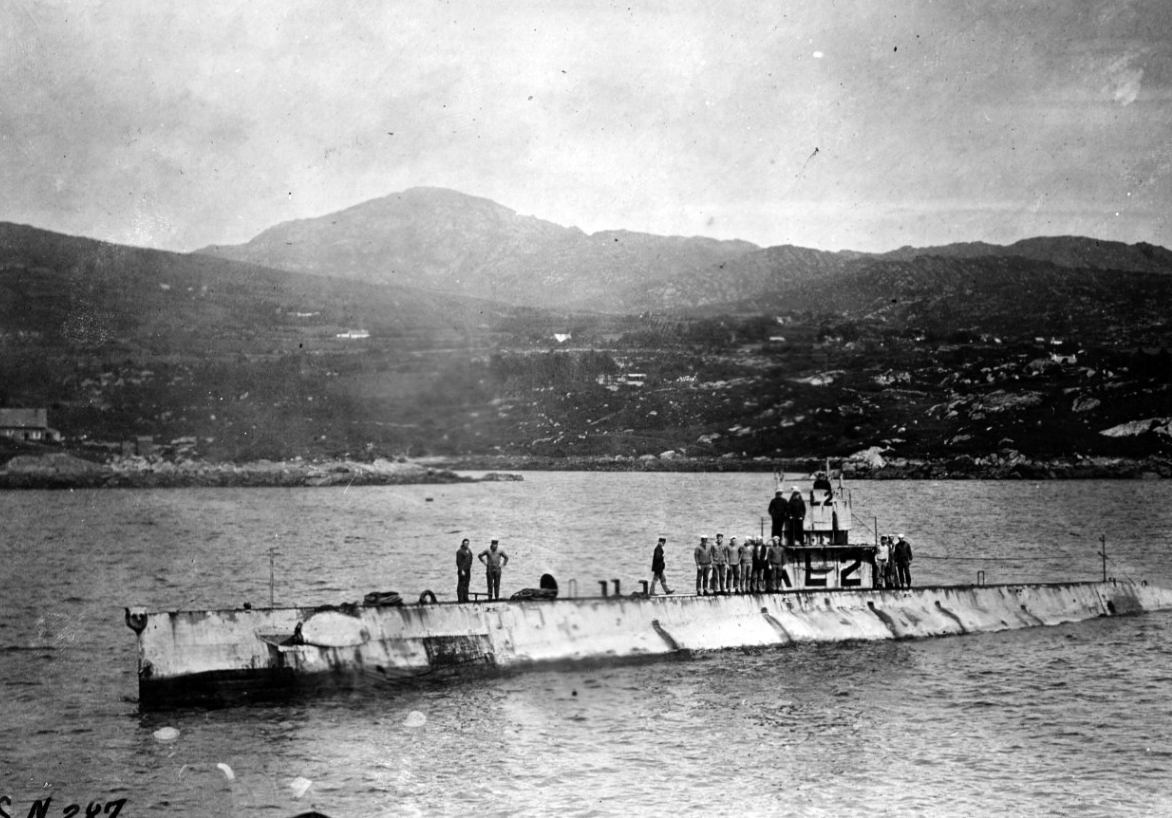 The USS AL-2 in Bantry Bay, Ireland, after encounter with the German submarine UB-65 on 10 July 1918 off Fastnet Light, Ireland, which resulted in the sinking of the U-boat (NH 51121)

Given the limited communications, acoustic, and “identification, friend or foe” technology of the 1917–1918 period, it wouldn’t seem like a “good idea” to operate Allied submarines in waters infested with German U-boats, due to the risk of fratricidal engagements. That did not stop either the Royal Navy or the U.S. Navy from doing so. The advantage of using submarines was that U-boats would generally see Allied destroyers and escorts long before they could see the submarine periscope or conning tower, enabling the U-boats to avoid being attacked. In theory, the low freeboard of a submarine would enable it to approach a U-boat undetected and conduct a surprise attack. In June 1917, the Commander of U.S. Naval Forces in Europe, Vice Admiral William S. Sims, recommended that U.S. Navy submarines be deployed to the European Theater. On 2 July 1917, Chief of Naval Operations (CNO) Admiral William S. Benson ordered 12 submarines be readied for deployment. L-2 was one of the submarines deemed most capable of making the transatlantic crossing. It took until December 1917 for the submarines to be trained and ready to deploy.

On 4 December, eight submarines under tow departed Melville, Rhode Island, for European waters via the Azores, in company with the submarine tenders USS Fulton (AS-1)* and USS Bushnell (AS-2), with the commander of the submarine flotilla embarked, Captain Thomas C. Hart—future four-star commander of the U.S. Asiatic Fleet at the start of World War II. L-2, under the command of Medal of Honor awardee Lieutenant Paul F. Foster, was under tow by the tug USS Conestoga (AT-54), which would later disappear without a trace with her crew of 56 after departing San Francisco Bay in 1921—and was found in 2015. A gale caused the force to scatter, and it regrouped in Bermuda on 13 December. After repair work in the Azores and several patrols near the Azores, L-2 departed and arrived at Queenstown, Ireland on 27 Jan 1918. Due to the number of destroyers and other ships operating out of Queenstown, the submarine’s base was moved to Berehaven on Bantry Bay, further to the west, but still on the south coast of Ireland. Since the British already had L-class submarines, L-2 was renamed AL-2 and a large “A” painted on her.

On 25 May 1918, AL-2 got underway from Bantry Bay for a patrol, and the next day sighted what was believed to be a German submarine. Throughout the day, AL-2 made multiple attempts to get in firing position, eventually doing so, but because the identity of the submarine could not be confirmed, and because batteries were running low, AL-2 broke off the attempt.

On the morning of 10 July 1918, AL-2 was returning from a patrol south of Ireland when she encountered the destroyers USS Parker (DD-48) and USS McCall (DD-28). Despite sending blinker and smoke bomb recognition signals, one of the destroyers opened fire on AL-2, getting off five rounds, with no hits, before finally recognizing AL-2 as friendly.

AL-2 continued toward Berehaven and, at 1755 local, sighted what was initially thought to be a nun buoy. At 1830, a submarine fired a torpedo at AL-2 that detonated 200 feet from her engine room, according to Lieutenant Foster’s later report. The periscope of the submarine was clearly visible on the starboard quarter at a range of 80 yards, which would have put her not far from the explosion. Her skipper took her down to 70 feet and listened, detecting sounds of what the crew evaluated as two submarines. AL-2 attempted to chase one of the submarines while submerged via sound. Foster then attempted to ram the closest submarine, according to his after-action report. Foster than gave chase to one of the two U-boats, but eventually lost her, and spent two hours circling around trying to regain contact.

Foster eventually surfaced and reported to Bushnell in Bantry Bay about the explosion and the possibility that the U-boat had sunk. The log entries and after-action reports depict an extremely confusing picture of using the technology of the time to try to track submerged submarines while submerged. In reality, there almost certainly was no second submarine present, although some accounts have postulated that UB-65 was torpedoed by a second German submarine that was trying to hit AL-2—or thought UB-65 was an Allied submarine. However, this does not comport with German records or British intelligence which had a very good handle on which German submarines were on patrol and their general patrol area—thanks to breaking the German codes—and the Germans’ propensity to communicate frequently on the radio (a liability they continued into WWII).

The British gave AL-2 credit for sinking UB-65, and for many years the engagement was reported as follows; “The AL-2 on the surface was torpedoed by UB-65 submerged, but turned and crash-dived steeply in an attempt to ram UB-65 and thereby forced the German submarine to crushing depth and the bottom – from which it never arose. This action was described by Josephus Daniels, Secretary of the Navy as follows: “…had the AL-2 struck the enemy submarine, both boats would have been lost, but Lieutenant Paul F. Foster, the commanding officer, did not hesitate because of the risk, and heroically offered himself, his crew, and his boat as a sacrifice in an endeavor to destroy the enemy – Lieutenant Foster’s daring as a submarine commander formed one of the most thrilling chapters of the war.” Later accounts suggested that some of Foster’s crew were less than “thrilled” about his zeal to ram another submarine while submerged. There was no doubting Foster’s courage: He had been awarded a Medal of Honor for valor under fire ashore—disembarked from the battleship USS Utah (BB-31) at Vera Cruz, Mexico, in 1914—and would later be awarded a Navy Cross for his actions during a turret explosion and fire aboard the light cruiser USS Trenton (CL-11) an event in which Ensign Henry Clay Dexter and Boatswains Mate First Class George Cholister would be awarded posthumous Medals of Honor and 12 other Sailors would die.

This all made for a good war story, award citation, and great press, but it turned out it wasn’t true, at least the part about UB-65 sinking. In 2004, an expedition by the British “Channel 4 Wreck Detectives” dove on an unidentified sunken U-boat that had been located off Padstow, England the year before during a routine survey by the Royal Navy. Based on design features, and the big help of identification numbers stamped on a propeller, the wreck was positively identified as UB-65, many miles from the site of the engagement with AL-2. There were no external signs of damage, although aft hatches were open, suggesting an escape attempt. The Germans had initially concluded that UB-65 had been sunk by the premature detonation of her own torpedo during the engagement with AL-2, but in 1930 the Germans had reassessed it to be lost due to accidental causes off Padstow, England, on or after 14 July 1918. Exactly how the Germans figured this out in 1930 is unclear, but presumably was based on the previously unexplained loss of a Portuguese vessel off Padstow on 14 July (the presumption being that UB-65 had sunk it before further radio contact was lost).

It actually turns out that determination of U-boat losses in World War I is a very imprecise science, and there are widely differing accounts of the time, place and means of loss of a number of sunken U-boats. There are also wildly varying accounts of the loss of UB-65. I have tried to remain as close to the original AL-2 logs and after-action reports as possible, even though they are confusing. However, UB-65’s reputation as a “haunted” ship has resulted in embellished, and probably even fabricated, accounts. Whether UB-65 was haunted or not, is obviously dubious, some of her crew supposedly believed she was haunted and even reported seeing ghosts. The submarine also suffered a long string of accidents, a number of them fatal, which does appear factual.

While UB-65 was under construction in 1917, three crewmembers were asphyxiated by diesel fumes in the engine room, and two more crewmen (some accounts say workers) were crushed by a falling girder. During sea trials, a crewman was washed overboard and never recovered. During a test run, a ballast tank fracture caused water to reach the batteries, resulting in toxic gas that killed two crewmen. On the first test dive, UB-65 suffered another ballast tank fracture and the sub sank to the (apparently shallow) bottom, where the crew was trapped for 12 hours until they finally found a way to get the submarine to the surface. As the submarine was being loaded with torpedoes prior to its first patrol, one of the torpedoes exploded, killing the ship’s second officer (executive officer) and killing several other crewmen (some sources say four, others eight, and some none) and wounding several others, and requiring extensive repairs to the submarine.

It was supposedly the ghost of the executive officer that haunted the ship, but it appears the “ghost stories” are actually traceable to a British journalist, Hector Charles Bywater, who wrote about the numerous sightings of ghosts aboard the ship after the war. There appear to be no other accounts prior to Bywater’s, suggesting fabrication. In the 1920s, Bywater also wrote two books about a future war between the United States and Japan. The Great Pacific War, which he wrote in 1925, fairly accurately depicted the actions by the U.S. and Japanese navies during World War II—and was popular in Japan— although contrary to some accounts it did not predict the attack on Pearl Harbor. Foreign agents on both sides were known to plant false rumors in an attempt to degrade enemy morale, and this could be the origin of ghost stories, although I could find no evidence of this in this case.

UB-65’s first skipper was replaced, by some accounts because of his inability to control his spooked crew, but more likely because of loss of confidence in his command abilities due to all the accidents. UB-65 went on to conduct six patrols under the command of Kapitänleutnant Martin Shelle, sinking six Allied merchant ships and the sloop HMS Arbutus, and damaging six others. It’s possible that the encounter with AL-2 resulted in some kind of internal (or not visible) damage that resulted in the loss of UB-65 several days later, and not during the encounter with AL-2. However, given UB-65’s accident-prone history, it’s entirely plausible she sank all by herself. All that is known for sure now is her location, and the fact that all 37 of her crew were lost, and probably had nothing to do with ghosts.

The Spruance-class destroyer USS Paul Foster (DD-964), in commission from February 1976 until March 2003, was named in honor of Paul F. Foster, who retired as a vice admiral in 1946, after being recalled to active duty at the start of World War II. He served as assistant Navy inspector general, and inspector for President Franklin Roosevelt.

*Note: The system of two-letter codes to denote ship types was not implemented until after World War I. So, in 1918, the submarine tender USS Fulton would have been designated “Submarine Tender No. 1,” not AS-1. The USS Utah would be “Battleship No. 31,” not BB-31. However, for the sake of brevity, I used the more modern system.