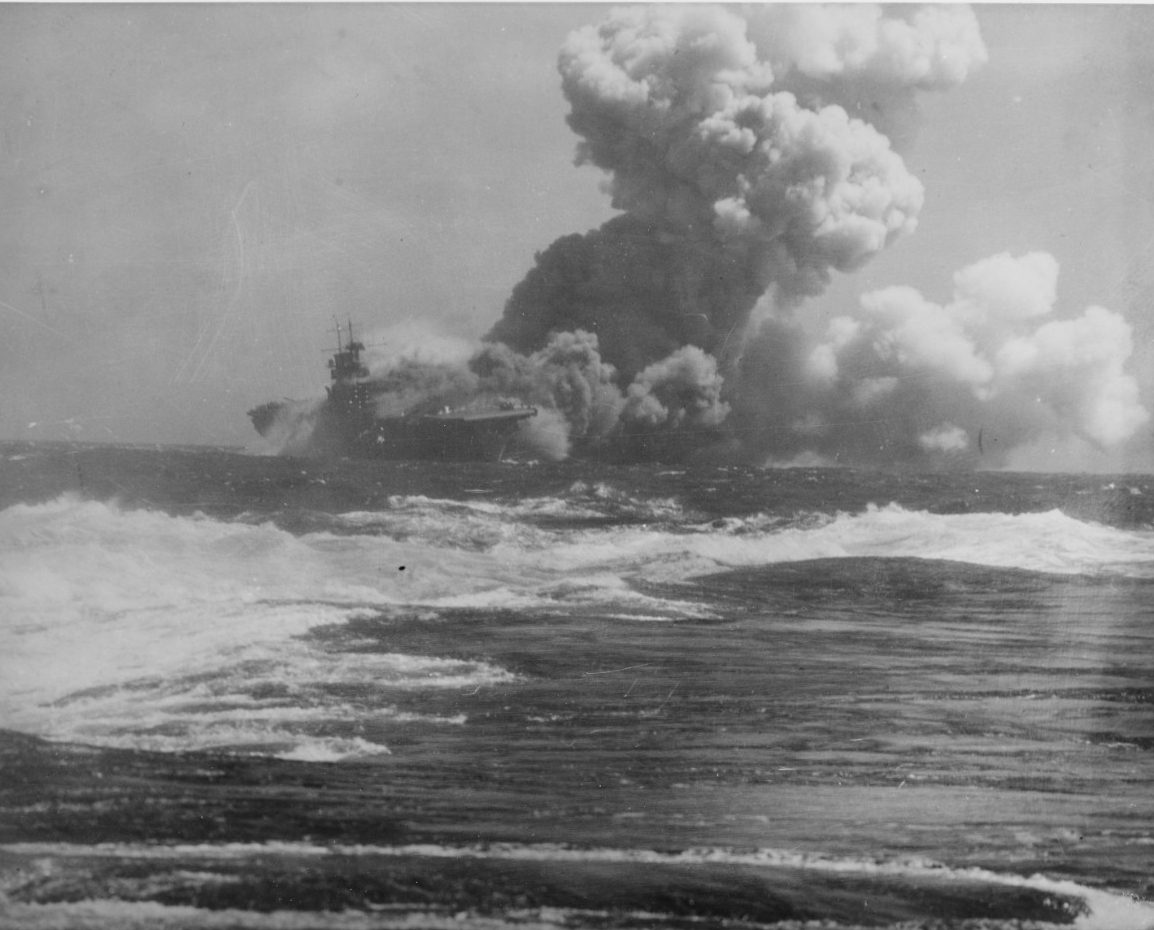 Rear Admiral Frank Jack Fletcher’s decision on 9 August 1942 to relocate his three carriers—USS Saratoga (CV-3), USS Enterprise (CV-6) , and USS Wasp (CV-7), newly arrived from the Atlantic—from the vicinity of Guadalcanal (thus depriving Rear Admiral Richmond K. Turner’s transports and the Marines ashore on Guadalcanal of air cover) remains one of the most controversial decisions of the war in the Pacific, and the subject of endless arguments ever since. Fletcher’s decision, however, was consistent with U.S. carrier doctrine developed in the pre-war years, which viewed aircraft carriers as a “hit-and-run” force, capitalizing on the speed and mobility of the ships. Exercises in which carriers remained tied to a fixed location in range of “enemy” land-based aircraft usually ended very badly for the aircraft carrier. Fletcher was deeply concerned about the threat from Japanese land-based aircraft and submarines (and counterattack by Japanese carriers) if he remained too closely tied to Guadalcanal for too long. Having already had two carriers sunk from under him, Lexington (CV-2) at Coral Sea and Yorktown (CV-5) at Midway, Fletcher had a healthy respect for Japanese capability. Fletcher reasoned that Japanese bombers alone would not be able to dislodge the Marines from Guadalcanal, but if his carriers were lost, the battle for Guadalcanal would be lost as well.

The Allied landing on Guadalcanal on 7 August had caught the Japanese by surprise, so there were no Japanese submarines in the area, although numerous false alarms convinced U.S. Navy commanders that there were. Japanese bombers from Rabaul at the northern end of the Solomons reacted within a matter of hours, and flew to the area of Guadalcanal. Their top priority was the U.S. carriers that the Japanese had figured out had to be in the area, and only after failing to find the carriers in two raids on 7 August and another on 8 August did the bombers go for the transports off Guadalcanal (suffering heavy losses as the U.S. ships had warning the bombers were on the way).  The 16 Japanese Betty torpedo bombers and 15 Zero fighters that sank the already damaged U.S. destroyer USS Jarvis (DD-393) with all 233 hands on 9 August (see H-Gram 009) were actually looking for the carriers.  (In H-009, I forgot to mention that Jarvis shot down two of the bombers and damaged four more in her final fight.)  Although the air threat was real, many have criticized Fletcher (including Rear Admiral Turner at the time, and CNO King, too, for being overly cautious). Although the Japanese land-based twin-engine Nell and Betty bombers could reach the U.S. carriers at extreme range, their fighter escort Zeros could only go as far as Guadalcanal itself—barely. With a narrow threat sector and no fighter escort, the Japanese bombers should have been quite vulnerable to U.S. carrier fighters with the advantage of radar warning. However, U.S. carrier fighter losses against Japanese fighters over Guadalcanal in the first two days had been significant and were of great concern to Fletcher. Although Japanese land-based bombers in the Solomons never did find or attack U.S. carriers, the Japanese quickly rectified their initial lack of submarines in the area.

By the end of August 1942, nine Japanese submarines were patrolling the area south and southeast of Guadalcanal. Like the bombers, the primary targets of the Japanese submarines were the U.S. carriers.  With the Enterprise out of action for repairs after the Battle of the Eastern Solomons, Fletcher still had three carriers with the arrival of the USS Hornet (CV-8) in the area. Although Fletcher had pulled his carriers out of the land-based air-threat, he was still operating near continuously in waters that quickly became infested with Japanese submarines, and on 31 August, his luck ran out, and his flagship, Saratoga (Captain Dewitt C. Ramsey, commanding—a future VCNO/CINCPACFLT) was hit by a torpedo for the second time in the war.

The Japanese submarine I-26 (Commander Minoru Yokota, commanding) fired six torpedoes at the Saratoga. One torpedo hit, wounding 12, including Fletcher, who suffered a cut on the forehead. Initial damage was not severe, but Saratoga (and her lost sister, Lexington) had a unique turbo-electric power plant, and cascading power outages caused the ship at points to go dead in the water and it had to be towed. Saratoga would survive, but would be out of action for months. After I-26 fired her torpedoes, she actually scraped hulls with the destroyer USS Macdonough (DD-351), but Macdonough’s depth charges were set too deep, and I-26 escaped.  (I-26 also sank the first U.S. merchant ship of the war, just off California on 7 December 1941, and would later sink the light cruiser USS Juneau [CL-52] with the loss of almost all hands. I-26 attacked and barely missed the U.S. escort carrier USS Petrof Bay [CVE-80] off Leyte on the night of 25–26 October 1944 and was sunk by either USS Coolbaugh [DE-217] or USS Richard M. Rowell [DE-403].)  Fletcher returned to Pearl Harbor with the Saratoga, but never held another combat command, as both Admiral King and Admiral Nimitz had lost patience with him.  (King had wanted to relieve Fletcher after the Battle of Coral Sea, but Nimitz stuck with him, at least until September.)

Throughout the first two weeks of September 1942, the remaining two undamaged U.S. carriers, Wasp and Hornet, frequently operated southeast of Guadalcanal, providing cover to U.S. resupply efforts and to ferry aircraft reinforcements to Guadalcanal to replace high aircraft losses at Henderson Field. Submarine sightings were frequent, and on 6 September, both the Hornet and the new battleship North Carolina (BB-55) narrowly missed being hit by Japanese torpedoes. On 15 September, while providing air cover to transports carrying the 7th Marine Regiment to reinforce Guadalcanal, the U.S. luck ran out. Although U.S. carrier fighters shot down a Japanese Mavis long-range floatplane in the early morning, the Japanese were able to determine the carriers’ location.

At 1445 on 15 September, the Japanese submarine I-19 (Lieutenant Commander Takaichi Kinashi, commanding) fired six Type 95 torpedoes (smaller submarine-launched version of the Type 93 “Long Lance” oxygen torpedo) at the Wasp from 1,000 yards. At least two, possibly three, torpedoes, hit the Wasp while the other three travelled several miles into Hornet’s screen. Wasp had just launched eight Wildcat fighters and 18 SDB Dauntless dive bombers (for ASW CAP). Unlike Yorktown (CV-5) at the Battle of Midway and Enterprise (CV-6) at Eastern Solomons, both of which had warning of inbound attack and had time to execute lessons from Coral Sea (such as draining fuel from aviation fuel lines and replacing with inert gas), Wasp was caught at an extremely vulnerable point while conducting flight operations. The result was similar to what happened to the Japanese carriers at Midway: a raging inferno with numerous secondary explosions, which killed many of the damage control team members. Captain Forrest P. Sherman (a future CNO) tried valiantly to save his ship (and would be awarded a Navy Cross and Purple Heart for his efforts), maneuvering her so that smoke and flame would be blown clear and save as much of his crew as he could. However, it was not long before it became clear that the situation was hopeless.

At 1500, a massive explosion tore through the Wasp. The embarked task force commander, Rear Admiral Leigh Noyes, had his clothes set on fire, but was otherwise unhurt. The explosion was so extreme that Rear Admiral Norman Scott, embarked on heavy cruiser USS San Francisco (CA-38), assumed that Noyes had to be dead and assumed command of the task force (a correct decision anyway since Noyes had no capability to command from the crippled Wasp). By 1520, Captain Sherman was forced to order abandon ship. Of Wasp’s crew of 2,247, 173 were killed and over 300 wounded. Still, the burning and abandoned carrier refused to sink, and had to be scuttled by three torpedoes from the destroyer USS Landsdowne (DD-486,) finally succumbing around 2100. All but one of Wasp’s airborne aircraft were recovered by the Hornet, but 45 planes went down with the ship. Japanese submarine I-15 observed Wasp sink, providing one of the few accurate Japanese battle-damage assessments of the war.

Meanwhile, the three torpedoes that went into Hornet’s screen caused damage as well. The North Carolina was hit and damaged by a torpedo that hit forward, killing five, and causing the forward magazines to be flooded as a precaution. Despite a very large hole, the North Carolina demonstrated the toughness of the new U.S. battleship designs, and with superb damage control very quickly resumed making 25 knots. She nevertheless had to be withdrawn back to Pearl Harbor for two months of repair, which left only one new battleship (USS Washington—BB-56) in the South Pacific.

The destroyer USS O’Brien (DD-415) (Commander Thomas Burrowes, commanding) was hit in the bow by a torpedo, far enough forward that no crewmen were killed. Nevertheless, that damage was severe enough that the ship had to be withdrawn for repair. O’Brien had been specially modified with additional anti-aircraft weapons, and her later absence (along with North Carolina) would be a factor in the loss of Hornet at the Battle of Santa Cruz in late October. O’Brien was able to transit at 15 knots to Espiritu Santo for temporary repairs. Although certified as being capable of making the transit back to Pearl Harbor, the O’Brien began to break apart after her crew had sailed her for 2,800 miles, and she sank on 19 October. All of her crew were rescued.

Rear Admiral Leigh Noyes (who had relieved Fletcher as carrier task force commander) was heavily criticized as a result of the loss of Wasp (which left Hornet as the one operational U.S. carrier in the Pacific until Enterprise could complete repairs). Noyes was accused of having operated his carriers for too long in the same place, thereby facilitating the submarine attack. Later analysis, however, showed that Noyes had varied his location over a 300-nautical-mile area of operations, but there were just too many Japanese submarines and, as Fletcher had feared, keeping the carriers tied down near Guadalcanal put them at great risk. And like Fletcher, Noyes would not hold operational command again.  (And, as an aside, when Nimitz chose Rear Admiral Raymond Spruance to command the Enterprise/Hornet task force at Midway on the recommendation of bedridden Vice Admiral Halsey, it was in the place of the next senior aviator, Noyes.)