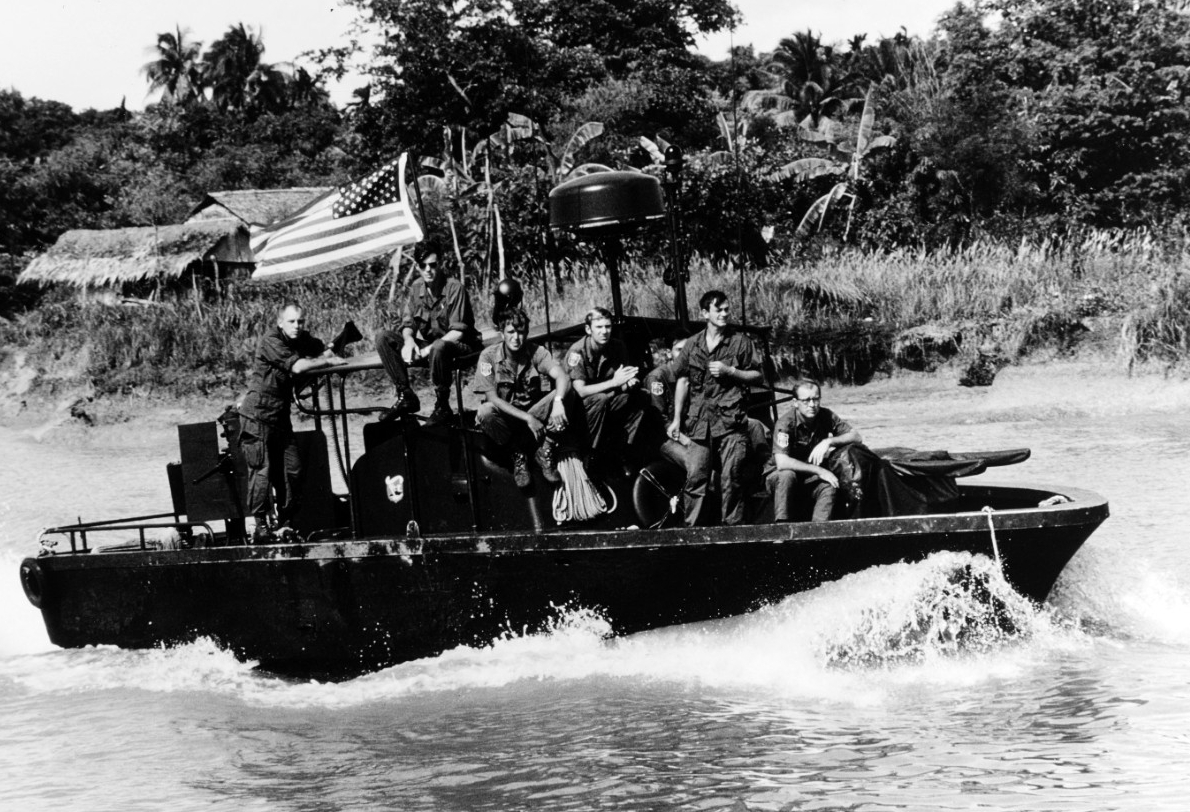 This H-gram marks National Vietnam Veterans Recognition Day. Today, all U.S. Navy museums hosted commemoration events, which included presenting pins provided by the Vietnam War Commemoration Commission to all Vietnam War veterans in attendance as a gesture of appreciation and respect for their service and sacrifice. Veterans returning from the Vietnam War in the 1960s and 1970s did not receive the gratitude from our nation that has become the norm today. Today’s commemoration at the National Museum of the United States Navy in Washington, DC, also focused on the significant contribution of our sister service, the U.S. Coast Guard, to Operation Market Time (the interdiction of Vietnamese Communist seaborne supply routes) that cost the lives of eight Coastguardsmen. The NAVADMIN from CNO directing U.S. Navy participation in National Vietnam Veterans Recognition Day may be found here.

The character of the Vietnam War changed dramatically in 1969. However, intense combat continued, as well as acts of heroism. I don’t have overall numbers for 1969, but during 1968, crews on board the river patrol boats (PBRs) alone earned one Medal of Honor, six Navy Crosses, four Legions of Merit, 24 Silver Stars, 290 Bronze Stars, 363 Navy Commendation Medals, and more than 500 Purple Hearts, with one out of every three Sailors being wounded. The numbers would have been comparable in 1969, for although there were no Tet-scale offensives and bombing had been halted over North Vietnam, the pace of riverine and coastal operations by the U.S. Navy continued largely unabated. They began to slow somewhat toward the end of that year as the new Nixon administration’s “Vietnamization” policy increasingly took effect and as the South Vietnamese Navy took on more combat operations. Nevertheless, three U.S. Navy personnel would be awarded the Medal of Honor for combat action in 1969;

Lieutenant Junior Grade Joseph R. Kerry, USNR, was awarded the Medal of Honor for action on 14 March 1969 while serving as a SEAL team leader on a mission to capture key Viet Cong leaders that turned into a major firefight. Despite his severe wounds, Kerry continued to lead his men in the successful accomplishment of their mission, resulting in the acquisition of critical intelligence. Kerry went on to serve as U.S. senator from Nebraska.

Hospital Corpsman Second Class David R. Ray was awarded a posthumous Medal of Honor for action on 19 March 1969 while serving as corpsman with Battery D, 2nd Battalion, 11th Marines, 1st Marine Division, when a battalion-sized Viet Cong assault penetrated the battery’s perimeter. Despite serious wounds, Ray repeatedly exposed himself to intense enemy fire to aid wounded Marines, and was forced to defend himself from direct attack by two enemy soldiers. He finally sacrificed his life to shield a wounded Marine from an enemy grenade explosion.

Lieutenant Thomas G. Kelley was awarded the Medal of Honor for action on 15 June 1969 while serving as commander of River Assault Division 152, when his column of eight river assault craft came under intense Viet Cong fire. Despite his own severe wounds, Kelley continued to lead and inspire the other boats until they were out of harm’s way.

The “Tet Offensive” in early 1968 represented a psychological turning point in American political support for the war effort in Vietnam despite the fact that the series of surprise attacks was beaten back with catastrophic losses to the Viet Cong in South Vietnam—losses from which they never really recovered. (In the end, South Vietnam would fall in 1975 to a conventional attack by the North Vietnamese Army, not due to the Viet Cong insurgency.) However, the size, surprise, and casualties of the Tet Offensive shocked and disillusioned much of the American public, who had been led to believe that victory was just around the corner by optimistic pronouncements by senior military and political leaders. President Lyndon Johnson had halted the U.S. bombing of North Vietnam in order to induce the North Vietnamese to the negotiating table. This worked, although I would argue that the severe Vietnamese Communist losses in during Tet (and in several “mini-Tet” offensives), as well as severe damage to North Vietnamese infrastructure caused by the bombing, had a lot to do with it.

Richard M. Nixon won the 1968 U.S. presidential election in part because he claimed to have a plan to end the Vietnam War, the details of which were not revealed before the election. In a speech at the end of December 1968, President Nixon gave a name to the new strategy: “Vietnamization.” Under this strategy, U.S. forces would increasingly focus on training and equipping the South Vietnamese army, so that it could pick up an ever-increasing share of the burden of fighting, allowing the U.S. forces to gradually draw down and get out of Vietnam. The North Vietnamese responded with a strategy of their own: “Talk while fighting, fight while talking” (probably sounds better in Vietnamese). As a result, nearly as many Americans died during months of negotiating for the shape of the table for the Peace Talks as died during the same number of months of combat in 1968.

The North Vietnamese viewed negotiations, as well as declining U.S. domestic support for the war, as a signal of weakness of U.S. political will. Their strategy thus became to both protract the fighting and protract the negotiations, while using the cessation of bombing to build up their conventional fighting power (with large quantities of Soviet and Communist Chinese military equipment that came into North Vietnam with no hindrance). Their intent was to wait out the United States before attempting to invade South Vietnam (they did this prematurely in 1972, and were beaten back by U.S. naval and air power, but were successful in 1975 when the U.S. did not intervene except to assist with limited evacuations).

The negotiations and political machinations had little effect on U.S. Navy operations in the early part of 1969 other than that aircraft operating from aircraft carriers in the South China Sea bombed enemy targets in South Vietnam rather than North Vietnam itself. The U.S. Navy did fly reconnaissance missions over North Vietnam, which were occasionally shot at despite the “truce,” and the United States would respond with limited retaliatory strikes on the southern part of North Vietnam, which did little to curb the North Vietnamese build-up. However, the war in the rivers and canals of the Mekong Delta in South Vietnam (Operation Game Warden) and on several rivers south of the Demilitarized Zone (DMZ) (Operation Clearwater) continued unabated for months and, in fact, increased with the advent of Operation SEALORDS, which pushed U.S. riverine activity right up to the Cambodian border.

I will cover more on the “Vietnamization” of the war in a future H-gram.