H-044-1: Operation Iceberg—Background to the Battle for Okinawa 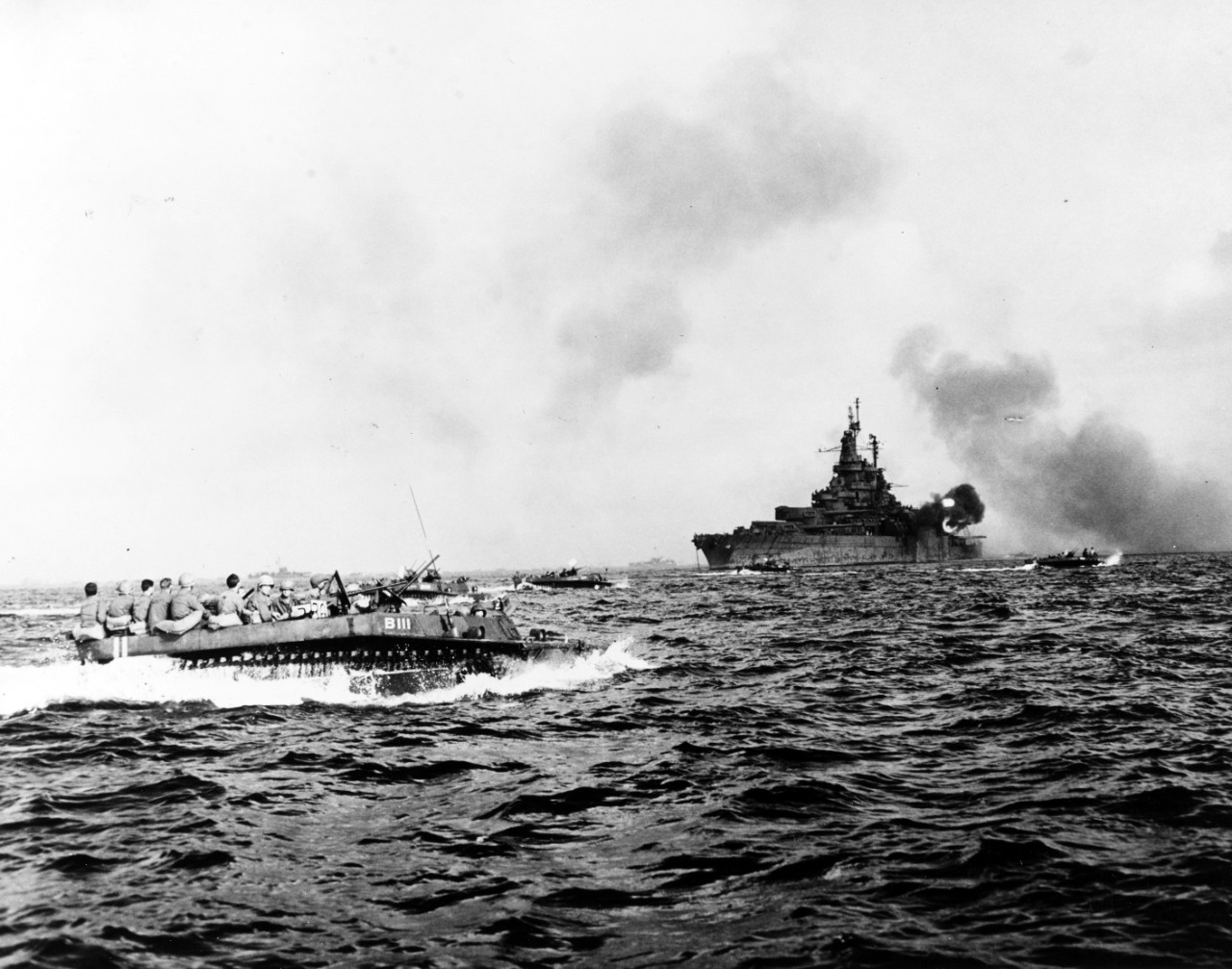 Troop-laden LVT-4 amphibious tractors head for the Purple and Orange landing beach areas, just before H-hour of the invasion of Okinawa, 1 April 1945. In the background, USS Tennessee (BB-43) fires her 5-inch/38-caliber secondary battery at the objective area (80-G-309930).

Although this H-gram focuses on the operations of the U.S. Navy during the Battle for Okinawa, some background on the reasons for taking Okinawa and on the land campaign that lasted from 1 April to 22 June 1945 is in order.

Throughout the Pacific War, Chief of Naval Operations Fleet Admiral Ernest J. King’s vision was to drive across the central Pacific, take Formosa, and then establish a base of operations on the Chinese coast, blockade Japan, and use Chinese troops for any invasion of Japan. However, General Douglas MacArthur won the debate to take the Philippines instead of Formosa and, as King anticipated, MacArthur’s forces became stuck in a protracted campaign on that archipelago. Moreover, although the Japanese forces were on a desperate defensive everywhere else in the Pacific, they went on a massive offensive in China in the summer of 1944. The Ichi-go offensive rolled up General Clair Chennault’s airfields (which were undefended by ground forces). It decimated the Nationalist Chinese armies in which General Joseph Stillwell had invested so much in training and hard-to-obtain supplies (many of which had to be flown into China over the Himalayas)—at least those forces Generalissimo Chiang Kai-shek wasn’t hoarding to use against the Chinese Communists after the United States took care of Japan for him. So, with U.S. strategy and plans in China a total disarray, and Formosa deemed too tough a nut to crack, Okinawa became the alternative.

Okinawa is an island in the Ryukyus chain that runs southwesterly from southern Japan to Formosa, with Okinawa about equidistant (340–360 nautical miles) between the southern Japanese island of Kyushu, Formosa, and the coast of China. The island is about 100 nautical miles long, and 10 nautical miles wide, oriented along a northeast/southwest axis, with a number of irregular peninsulas protruding and numerous smaller islands scattered about. Among the islands was a group about 20 nautical miles to the southwest of the southern end of Okinawa known as Kerama Retto, which would prove invaluable as a reasonably protected anchorage for ammunition ships, supply ships, oilers, tenders, and damaged ships. Okinawa is 4,000 nautical miles from Pearl Harbor, 1,200 miles from the major U.S. fleet anchorage at Ulithi, and 900 miles from the advanced U.S. Naval facility being established at Leyte.

The date set for the invasion of Okinawa, code-named “Operation Iceberg,” was set for 1 April 1945, and the plan called for capturing Kerama Retto a few days before that. Bombing and shelling of the island would commence about 23 March 1945. The basic plan called for 16,000 men from four divisions (two Army divisions and two Marine divisions) to go ashore on the Hagushi beaches on the southwest coast of Okinawa, closer to the southern end of the island than the northern, with the intent to quickly capture the two major airfields (including Kadena). Then, the Marines would attack toward the northern end of the island and the Army to the south. Over the next days, up to 183,000 U.S. combat troops would come ashore, followed by service troops from all services, eventually reaching over 500,000 (which would include 18,000 Navy personnel, mostly Seabees and medical). The ground campaign would be under the command of U.S. Army Lieutenant General Simon Bolivar Buckner (who would be killed by Japanese artillery a few days before the end of the battle).

The Japanese had about 77,000 troops on Okinawa, and another 20,000 native Okinawans pressed into service, all under the command of Lieutenant General Mitsuru Ushijima., Like General Tadamichi Kuribayashi, his counterpart on Iwo Jima, Ushijima proved to be an able commander who had learned lessons from previous Pacific battles, particularly the folly of trying to defend at the beachhead in the face of overwhelming U.S. naval gunfire and carrier aviation strikes. Japanese intelligence correctly predicted that Okinawa would be the next major U.S. objective and correctly predicted the timing, so the Japanese were well prepared. Ushijima conceded the (correctly) expected landing area and the airfields, and concentrated the bulk of his forces in deeply dug-in and well-concealed concentric lines of defense at the southern end of the island, although a significant number were also dug-in on the northern part of the island. As a result, the U.S. Navy poured a weeks’ worth of stupendous pre-invasion bombardment mostly into where the Japanese weren’t. (The amount of ordnance expended was staggering: 1,500 16-inch rounds, 4,600 14-inch rounds, 750 12-inch rounds, 5,800 8-inch rounds, 7,200 6-inch rounds, was well as over 50,000 5-inch rounds, and prodigious amounts of aerial bombs, rockets, and napalm.) Japanese accounts marveled at the “rain of steel,” that mostly wasn’t falling on them.

Except for a few kamikaze and conventional air attacks (and sea mines) the main amphibious assault on Okinawa on 1 April 1945 was virtually unopposed, and U.S. Army soldiers and Marines captured the airfields and reached the opposite coast on the first day. It all had a “too good to be true” sense to it. And it was. As the Army moved south, the resistance steadily stiffened and then turned into a bloody protected slog. Each time Japanese defensive positions were about to be overrun, at great cost, the Japanese fell back on yet another line of defenses. (Watching the movie Hacksaw Ridge will give a much better sense of this than anything I can describe.) The battle would not be deemed over until 22 June. In the meantime, the Navy had to stay and fight it out against massed waves of kamikaze aircraft, also at great cost.

Organization for the Amphibious Phase of Operation Iceberg

The operational commander was Commander U.S. Fifth Fleet, Admiral Raymond A. Spruance, embarked in heavy cruiser Indianapolis (CA-35). Due to the complexity of the operation, Spruance and Indianapolis arrived with the earliest forces off Okinawa.

The commander of the Joint Expeditionary Force (Task Force 51) was Vice Admiral Richmond Kelly Turner, embarked in amphibious command ship Eldorado (AGC-11). Lieutenant General Simon B. Buckner, USA, was also embarked as Commanding General Expeditionary Troops (Task Force 56). Buckner would report to Turner until the amphibious phase was over and then he would report directly to Spruance.

The invasion force was absolutely massive and, including amphibious craft, numbered 1,213 ships. When added to the 88 ships of the Fast Carrier Task Force (TF 58) and over 95 ships in the logistics force, plus 22 Royal Navy ships in TF 57, there were over 1,400 ships and amphibious craft involved. To meet the plan of simultaneously landing four divisions of troops required eight transport squadrons, each with 15 assault transports, 6 assault cargo ships, 25 LSTs, 10 LSMs, and 1 LSD. There were 179 attack transports and 187 LSTs to carry the initial 172,000 combat troops and 115,000 service support troops who would land in the initial weeks. 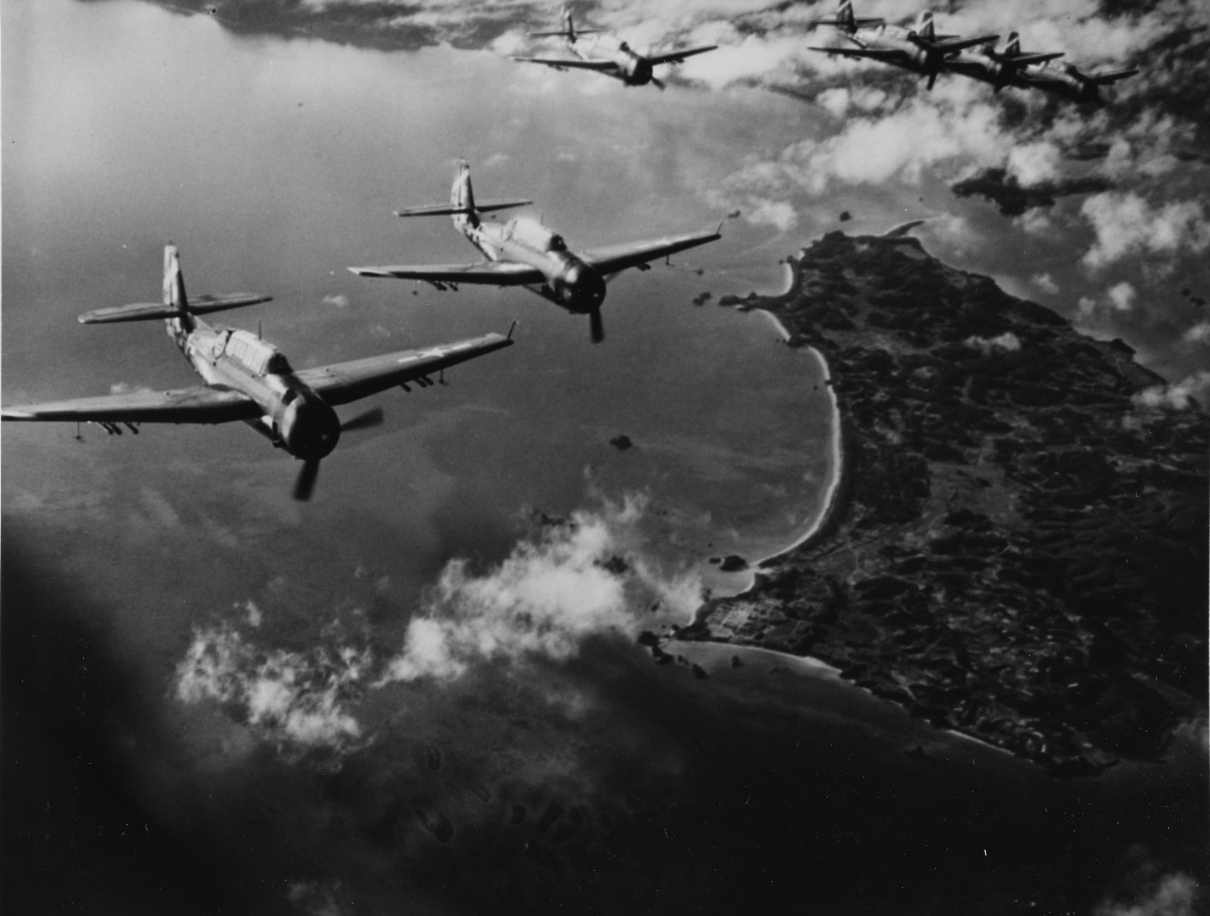 Task Group 50.8 was the Logistics Support Group Fifth Fleet, commanded by Rear Admiral D. B. Beary (probably the real hero of the battle) embarked in light cruiser Detroit (CL-8), with over 95 logistics ships.

Task Force 57 was the carrier force from the British Royal Navy’s Pacific Fleet commanded by Vice Admiral Sir H. B. Rawlings, RN, and included five large carriers (British fleet carriers only embarked about 45–50 aircraft, but had armored flight decks). A Royal Navy battleship and six escort carriers also participated for a total of about 22 ships. TF 57 guarded the southern axis of air attack from Formosa and suppressed Japanese airfields in the Sakishima Islands, southwest of Okinawa.

Task Force 58, was the Pacific Fleet’s Fast Carrier Force, commanded by Vice Admiral Marc A. Mitscher, with his Chief Of Staff, Commodore Arleigh A. Burke, embarked in Bunker Hill (CV-17). TF 58 initially included 17 carriers (10 Essex-class fleet carriers, Enterprise [CV-6] and six Independence-class light carriers). Each carrier air group was different, but typically each Essex-class carrier had about 65 fighters (mostly F-6F Hellcats, although some air groups had a mix of Hellcats and F4U Corsairs; several Corsair squadrons were from the Marine Corps). Additionally, each air group usually had about four Hellcat night fighters, 15 SB2C Helldiver dive-bombers, and 15 TBM Avenger torpedo bombers, for an air group numbering between 95 and 102 aircraft. The light carriers typically embarked about 25 Hellcat fighters and 9 TBM Avenger torpedo bombers (the light carriers didn’t embark Helldivers). Based on lessons learned from the kamikaze attacks in the Philippines, as well from as the destruction of most of the Japanese navy, the number of dive-bombers and torpedo bombers on the carriers were significantly reduced in favor of a greater load of fighters. However, the fighters increasingly trained in the role of fighter-bomber, a mission that the Corsairs, in particular, were very good at.

Scattered among the TF 58 task groups were eight new fast battleships: North Carolina (BB-55), Washington (BB-56), South Dakota (BB-57), Indiana (BB-58), Massachusetts (BB-59), New Jersey (BB-62), Missouri (BB-63), and Wisconsin (BB-64), primarily to provide anti-aircraft protection to the carriers and to guard against a surprise surface attack. To counter the possibility of the Japanese super-battleship Yamato making it through the carrier air gauntlet, a force of seven of these fast battleships was formed to intercept her. This would have resulted in 54 16-inch guns against the slightly faster Yamato and her nine 18.1-inch guns. It probably wouldn’t have been much of a contest.

TF 58 had a total of 88 ships, including the new battle-cruisers Alaska (CB-1) and Guam (CB-2), each with nine 12-inch guns in three triple turrets, but also very effective anti-aircraft platforms.

Back to H-Gram 044 Overview