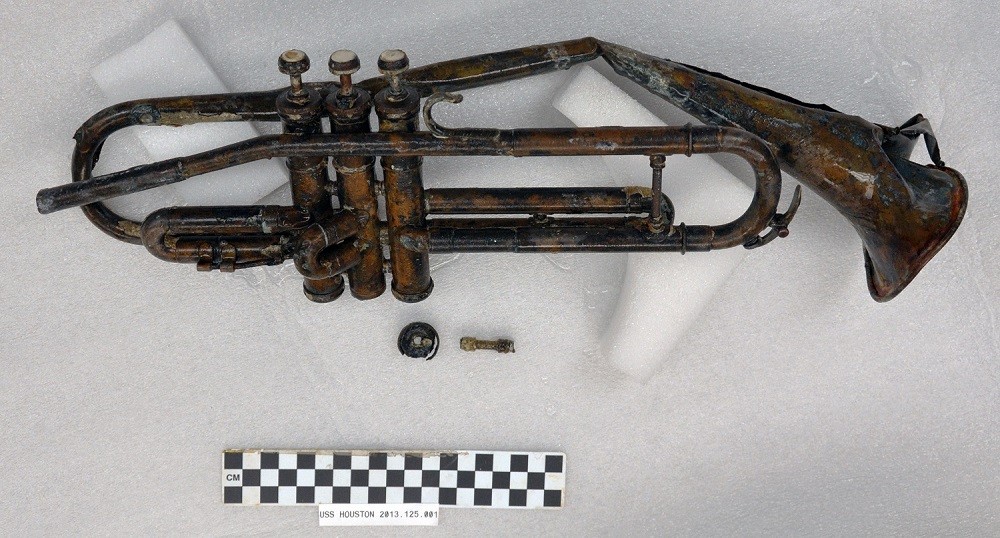 This trumpet belonged to a crewman who played in the band on the USS Houston (CA-30), flagship of the U.S. Asiatic Fleet; it went down with the ship when she was lost in action in the Battle of Sunda Strait on 1 Mar 1942 under a fusillade of Japanese torpedo and shellfire.  The damage to the trumpet is silent testimony to the ferocity of USS Houston's last hour of weeks of combat.  The trumpet was recovered illegally from the wreck site by an Australian sport diver in 2013, who subsequently voluntarily turned it over to the U.S. Naval Attache in Canberra.  When removed from the ocean environment, metal artifacts undergo a greatly accelerated deterioration process.  Since then, the trumpet has undergone an extensive and lengthy conservation process at NHHC (in a saline and chemical solution) to arrest the deterioration, remove the recent corrosion, and stabilize the artifact so that it can be safely displayed without further degradation.

Although still in conservation, the trumpet has been shown to members of the USS Houston Survivors and Next Generations Association, who have expressed their gratitude for the care that the US Navy has taken in preserving this tangible link to the sacrifice and heroism of the crew of USS Houston.