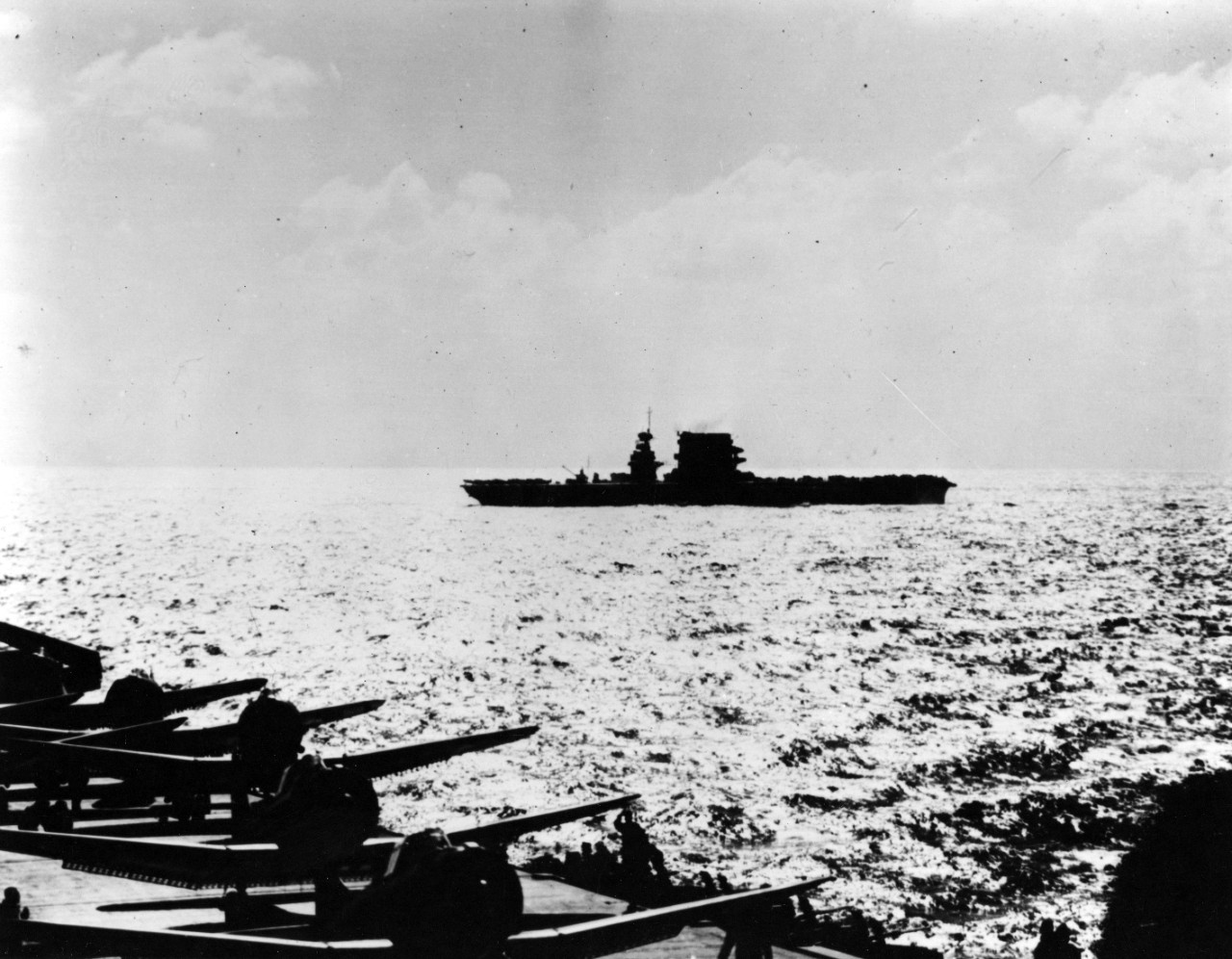 USS Lexington (CV-2) during the Coral Sea action, seen from USS Yorktown (CV-5), 8 May 1942. Large number of planes on deck and low sun indicate that the photo was taken early in the morning, prior to launching the strike against the Japanese carrier force. Yorktown has several SBDs and F4Fs on deck with engines running, apparently preparing to take off. Lexington, whose silhouette has been altered by the earlier removal of her 8-inch gun turrets, has planes parked fore and aft, and may be re-spotting her deck in preparation for launching aircraft (80-G-16569).

1. The Bomb That Changed the Course of the War

2. Carrier vs. Carrier (Us Versus Them)

4. Meanwhile in the Atlantic: The "Second Happy Time"

1. The Bomb That Changed the Course of the War

On 8 May 1942, 24 SBD Dauntless dive bombers from USS Yorktown (CV-5) commenced an attack on the Japanese fleet carrier IJN Shokaku in the Coral Sea. As each bomber nosed over in near-vertical dives from 18,000 feet on the wildly maneuvering Shokaku, their windscreens and bomb sights fogged over so badly during the descent that the U.S. pilots were blinded, forced to release their bombs "by memory." Although one bomb hit the Shokaku very near the bow and started a serious fire, one bomb after another missed. Finally one SBD, piloted by Lieutenant John Powers (U.S. Naval Academy '35), his wing on fire after being hit by canon fire from a Japanese Zero fighter, pressed his dive well below the standard minimum pull-up altitude. Power's bomb hit Shokaku nearly dead center and caused horrific and nearly fatal damage, starting massive fires and killing over 100 Japanese sailors. Unable to pull up in time, Powers flew through the frag pattern of his own bomb and crashed alongside the Shokaku. Although 15 dive bombers off the USS Lexington (CV-2) would later manage to hit the Shokaku with one more bomb, it was Power's bomb that knocked Shokaku out of action for the rest of the battle, leaving her unable to recover aircraft, and with damage so severe that she was unable to participate in the critical and decisive Battle of Midway one month later, where her presence could have easily turned that battle into a catastrophic defeat for the United States. By the sacrifice of his life and that of his radioman-gunner (Radioman Second Class Everett Clyde Hill), Powers quite likely prevented the loss of the Yorktown at the Battle of the Coral Sea and changed the outcome of two of the most important battles of World War II. For his valor, Powers was awarded the Medal of Honor, posthumously. Hill's parents received his $10,000 G.I. life insurance policy payout.

Attachment H-005-1 shows Japanese carrier Shokaku under attack by USS Yorktown VB-5 SDB Dauntless dive bombers taken from a Yorktown VT-5 TBD Devastator torpedo bomber during the Battle of the Coral Sea on 8 May 1942. Shokaku's forecastle is on fire from the first bomb hit and heavy black smoke amidships suggests this photo was taken moments after Lieutenant Powers' bomb hit, which took Shokaku out of the battle (and out of the Battle of Midway too.)

2. Carrier vs. Carrier (Us Versus Them)

American and Japanese carriers and carrier air groups had significant strengths and weaknesses relative to each other. Most histories "mirror image" Japanese doctrine and tactics with those of the United States, which frequently leads to an inaccurate understanding of the battle. There are two recent books that superbly describe Japanese carrier operations and are worth a read: Shattered Sword by Parshall and Tully, and Kaigun by Evans and Peattie. Both are over 500 pages long, so if you read my synopsis (derived from those books and many others) in attachment H-005-2 you will become a lot smarter about the relative capabilities of the United States and Japanese carriers and air groups at the Battles of the Coral Sea and Midway, in a much shorter period of time, and the battles might make more sense to you.

The Battle of the Coral Sea was the first carrier versus carrier battle in history; opposing surface forces never sighted each other. The battle occurred because U.S. naval intelligence provided Admiral Nimitz with sufficient warning and understanding of Japanese intent and capability that he chose to commit the two carriers Lexington (CV-2) and Yorktown (CV-5) against a Japanese force expected to consist of 2–3 carriers (Shokaku, Zuikaku and the small carrier Shoho.) Nimitz committed the Enterprise (CV-6) and Hornet (CV-8) as well, but they were unable to reach the area in time, due the timing of the Doolittle Raid (see H-Gram 004). The battle was a tactical draw (some accounts argue a tactical U.S. loss) but a strategic victory for the United States. The Japanese force failed in its objective to capture Port Moresby, New Guinea, which would have threatened the northeast coast of Australia. Although the Japanese had previously suffered setbacks, this was the first time that proved permanent. In addition, the Japanese carrier Shokaku was severely damaged, and attrition to the air groups of both Shokaku and Zuikaku caused both carriers to miss the decisive battle of Midway a month later, which almost certainly changed the course of that battle, and of the war. The Japanese also lost the small carrier Shoho on 7 May to a gross over-kill of U.S. carrier torpedo and dive bombers, and was the first carrier lost by either side in the war. The cost to the United States was high. The carrier USS Lexington was sunk as a result of secondary explosions following torpedo and bomb hits, the Yorktown was damaged by a bomb (but not hit by torpedoes, which was the critical factor in her being repaired in time for Midway), and the oiler USS Neosho (AO-23) (which had survived being moored right in the middle of the attack on Battleship Row at Pearl Harbor) was sunk, along with the destroyer USS Sims (DD-409). At the end of the second day of battle, the air groups on both sides were severely depleted with extensive losses, with Lexington sinking and Shokaku out of action. Both commanders, Rear Admiral Frank "Jack" Fletcher and Vice Admiral Takeo Takagi, opted to withdraw, which resulted in years of criticism of both by other naval officers and armchair historians (Takagi was pilloried by Admiral Yamamoto; Fletcher merely criticized, mostly behind his back). Please see attachment H-005-3 for more detail on the Battle of the Coral Sea.

Attachment H-005-4 shows USS Lexington (CV-2) at the Battle of the Coral Sea on 8 May 1942 in a photo taken from a Japanese aircraft. Lexington has been hit by two torpedoes (the first proved fatal) and two bombs, and is bracketed by numerous other near misses.

4. Meanwhile in the Atlantic: The "Second Happy Time"

Due to the demands of my day job and the focus on WWII in the Pacific and WWI, I have not written on WWII in the Atlantic after Pearl Harbor yet. My intent is to "catch up" the Atlantic in July during the lull between Midway and Guadalcanal. But, in brief, the initial months of the war in the Atlantic went very badly. The Germans reacted faster than we did, and German U-boats were operating off the coast of the United States (which didn't happen in WWI) faster than the U.S. was able to establish a system of convoys. U-boats sank so many ships so fast off the U.S. east coast that the spring of 1942 was known as the "Second Happy Time" by the U-boat crews. (The "First Happy Time" was in the early days of the war before the British managed to get some semblance of their act together.) Historians have tended to heap considerable blame for the sorry state of affairs on the Commander-in-Chief U.S. Fleet/Atlantic Fleet, Admiral Ernest J. King. (King became Chief of Naval Operations and retained the U.S. Fleet Hat in March 1942). King supposedly disliked the British so much that he was loath to implement a "British idea" of convoys, and therefore the United States was too slow (or "failed to learn the lessons of WWI") in implementing convoys on the U.S. east coast. King wasn't very favorably disposed toward the British, but then he wasn't favorably disposed toward just about anyone, and King's predispositions and sour demeanor had little to do with it (more on King in a future H-gram). The reality had far more to do with a lack of resources than with a resistance to working with the British or incorporating foreign ideas. The U.S. simply did not have enough destroyers; those that were in the Atlantic were committed and stretched thin escorting transatlantic convoys across the western half of the Atlantic, which the United States had been doing well before the start of the war, on occasion engaging in combat with German U-boats well before Pearl Harbor. Those critical convoys still needed to be escorted after war was officially declared, and the U.S. Navy continued to do so. The United States had also already "loaned" 50 WWI–vintage destroyers to the British as part of the 1940 "Destroyers for Bases Agreement" which contributed to the shortage. In the spring of 1942, there simply were not enough destroyers and patrol craft to provide escorts for merchant traffic going up and down the U.S. east coast. Convoys, without escorts, would have only made the U-boats' targeting problem even easier. Regardless, the result was a pretty grim tally of carnage up and down the U.S. east coast.

Please see attachment H-005-5 for additional detail on the first U.S. Navy combat actions against German U-boats in April and May 1917, the first U.S. naval officer killed in action in WWI, and the first underway refueling in history. In addition, while sending destroyers to combat the U-boats seems like a no-brainer today, Rear Admiral Sims' recommendation to do so actually provoked heated opposition among senior naval officers in the Navy Department in Washington, DC, at the time.

For anyone who may have missed previous H-grams, the most recent one (this one) can be found in the Director's Corner. For "back issues," toward the bottom of that page is the Content Library where all H-Grams are listed.

Also NHHC's website and blog The Sextant have a lot more content (and a lot more pictures) on significant historical events such as the Battle of the Coral Sea.