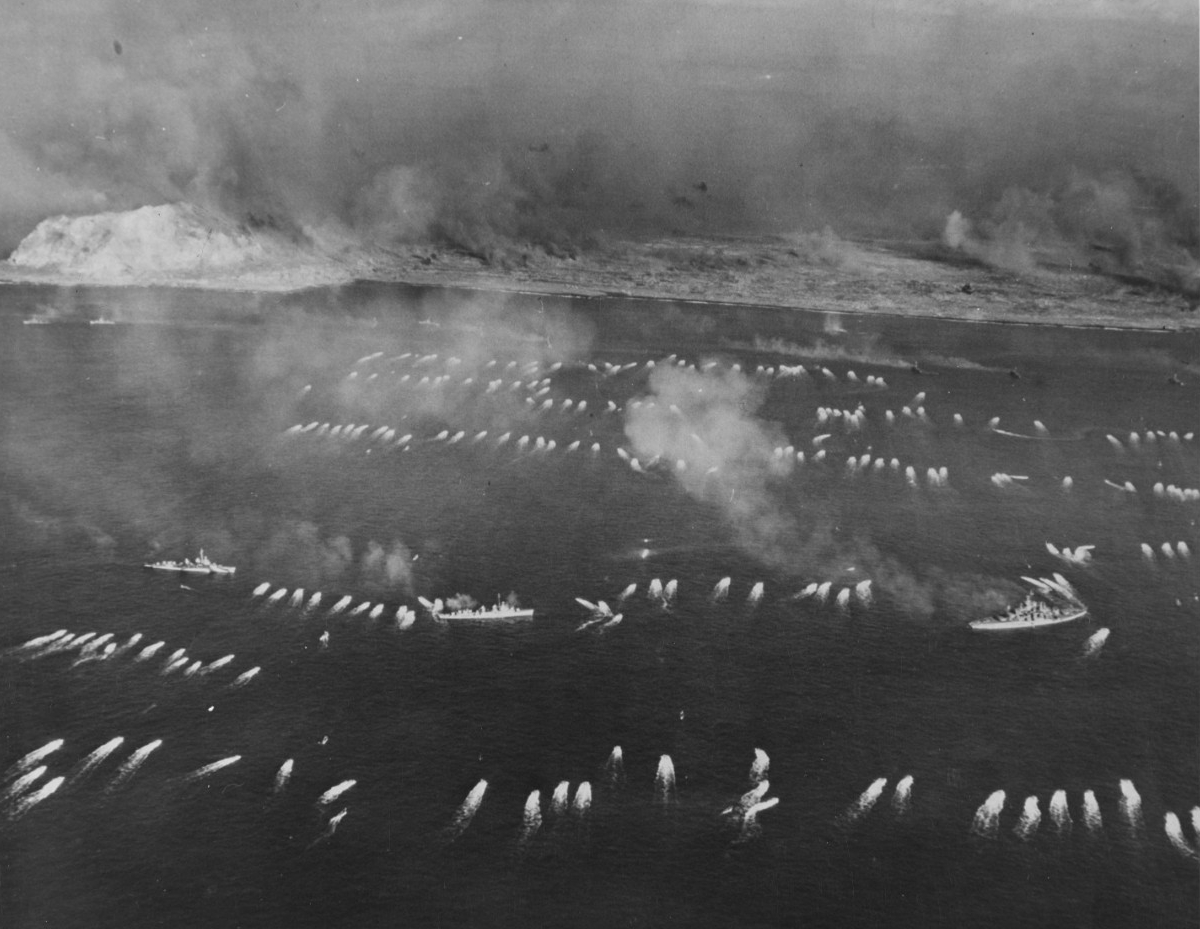 In the pantheon of numerous extremely heroic actions by the United States Marine Corps, the Battle for Iwo Jima rightly occupies a unique place. It is entirely fitting that the memorial to the U.S. Marine Corps overlooking Washington, DC, is a representation of the flag raising on Mount Suribachi, from what is possibly the most iconic photo of World War II. The memorial can be seen from throughout the U.S. capital, and deservedly so, because it represents courage and sacrifice that should never be forgotten. As Fleet Admiral Chester Nimitz succinctly put it, at Iwo Jima, “Uncommon valor was a common virtue.” That sacrifice includes 5,931 Marines who gave their lives, including over 500 in the first few hours alone. Uncommon valor also includes an additional 881 U.S. Navy personnel who gave their lives as well.

Over 100 U.S. Navy personnel were dead before the first Marine even set foot on the island. The first Medal of Honor (of 27 in the campaign) was awarded to Lieutenant (j.g.) Rufus Herring, skipper of LCI (G)-449. The vessel suffered 21 dead and 18 wounded while refusing to back down from providing cover for an underwater demolition team beach reconnaissance and refusing to abandon the swimmers in the water, despite intense Japanese artillery, mortar and machine-gun fire as the Japanese mistook the reconnaissance mission on D-2 for the actual invasion. Eleven other LCI gunboats were similarly chewed up, and similarly refused to yield. All were damaged, one was sunk, and two had to be towed away, but only after the swimmers were recovered. Twelve Navy Unit Commendations were awarded. Eleven other LCI gunboat skippers, the division commander, and the flotilla commander were awarded the Navy Cross. All told, 52 officers and Sailors were killed and 148 wounded in this action on 17 February 1945. An additional 40 were lost when a bomb hit the destroyer transport Blessman (APD-48), including 15 members of Underwater Demolition Team 15, the largest loss of life in a UDT in the entire war.

The Japanese were extremely well prepared with gun positions virtually impervious to air and sea bombardment, and in Lieutenant General Tadamichi Kuribayashi were better led than probably any other battle of the war. The actual landing went like clockwork until the Japanese opened up with everything they had, creating what one war correspondent described as “a nightmare in hell.” In that same hell with the Marines were two Seabee battalions, and the 133rd suffered the most casualties of any battalion in Seabee history (45 dead or missing, over 275 wounded). Nevertheless, 30,000 Marines went ashore on just the first day, with accurate naval gunfire and air support keeping casualties from being even worse than they were. In the fierce fight that followed, victory was never in doubt. The question was how long the Japanese would be able to drag out the battle and inflict maximum casualties, and they were exceedingly effective in both. A battle planned for days took over six weeks. Among the 27 Medals of Honor awarded were four to U.S. Navy corpsmen (two posthumously), who went above and beyond the call of duty to save their Marine brothers.

In the deception and decoy effort before the battle, the Fast Carrier Task Force (TF 58) took 16 aircraft carriers to within 60 miles of the Japanese coast on 16–17 February, launching the first carrier aircraft sweeps and strikes of the war over the Japanese Home Islands, and sending hundreds of Navy aircraft right into downtown Tokyo and environs. (Who accused Admiral Spruance of being overly cautious in the use of carrier air?)

The Japanese responded to the Iwo Jima landings with an audacious air operation of their own; about 28 aircraft on a 600-mile, one-way “special attack” mission, timed to hit U.S. ships right at dusk on 21 February. Within a matter of three minutes, six Japanese aircraft pummeled aircraft carrier Saratoga (CV-3) with multiple bomb hits and aircraft hits, followed some time later by yet another kamikaze strike, all of which killed 123, wounded 192, and put the venerable carrier out of action. The escort carrier Lunga Point (CVE-94) miraculously survived torpedoes fore and aft and a flaming ball of fire that glanced off the island. Escort carrier Bismarck Sea (CVE-95) was not so lucky, as two kamikaze hits in quick succession ignited an inferno and explosions that sent her to the bottom with heavy loss of life (318). However, Bismarck Sea was the last U.S. aircraft carrier ever lost (although others would come dangerously close in the months ahead). 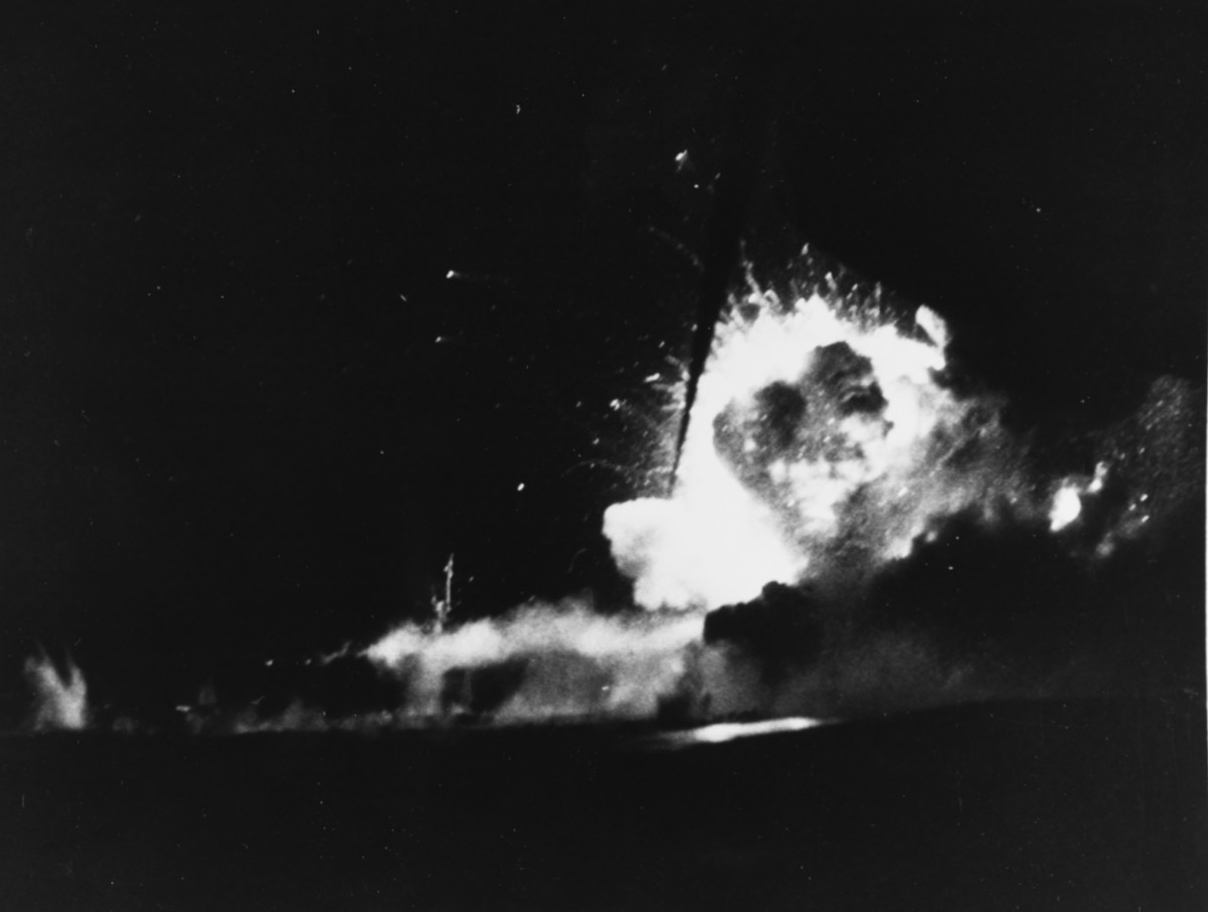 The Japanese attempt to attack the Iwo Jima invasion force with submarines was an abysmal failure in the face of new U.S. technology, such as sonobuoys and “Fido” acoustic homing torpedoes. Of three Japanese submarines carrying five Kaiten manned suicide torpedoes each, two were sunk (I-368, I-370) along with their Kaiten and all hands, and I-44 barely escaped without launching her Kaiten. Another submarine conducting a conventional mission, RO-43, was also sunk with all hands.

Numerous hard lessons were learned during the Battle of Iwo Jima, many of which were put to the test during the following Battle for Okinawa and mass kamikaze raids. One key lesson was to expect that in any invasion of Okinawa or of the Japanese Home Islands, the Japanese would fight to the last man for every square foot of soil, inflicting as many casualties as possible, even in the face of certain defeat. Iwo Jima proved beyond any doubt that there would be no such thing as an “easy” win for the remainder of the war, and that horrific casualties on both sides would be the cost of victory.

The battle for whether Iwo Jima was “worth it,” began before the battle even ended, as much of the American public was appalled at the cost of a speck of land in the middle of nowhere. A common rationale is that over 2,200 B-29 bombers made emergency landings on Iwo Jima, thereby trading 6,800 Marine and Navy lives for as many as 20,000 airmen. Actually, the great majority of those B-29s would have reached the Marianas, but landed on Iwo Jima as a sensible precaution. Other reasons for taking Iwo Jima, valid at the time, turned out to not be necessary. So with 20–20 armchair hindsight, the answer to whether it was “worth it” is probably “no.” But that detracts not in the least from the incredible valor and sacrifice of the Marines and Sailors who did their duty to the utmost, beyond what any nation has a right to ask. And, such uncommon courage should never be forgotten.

For more on the Battle for Iwo Jima, with emphasis on the Navy contribution, please see attachment H-042-1.