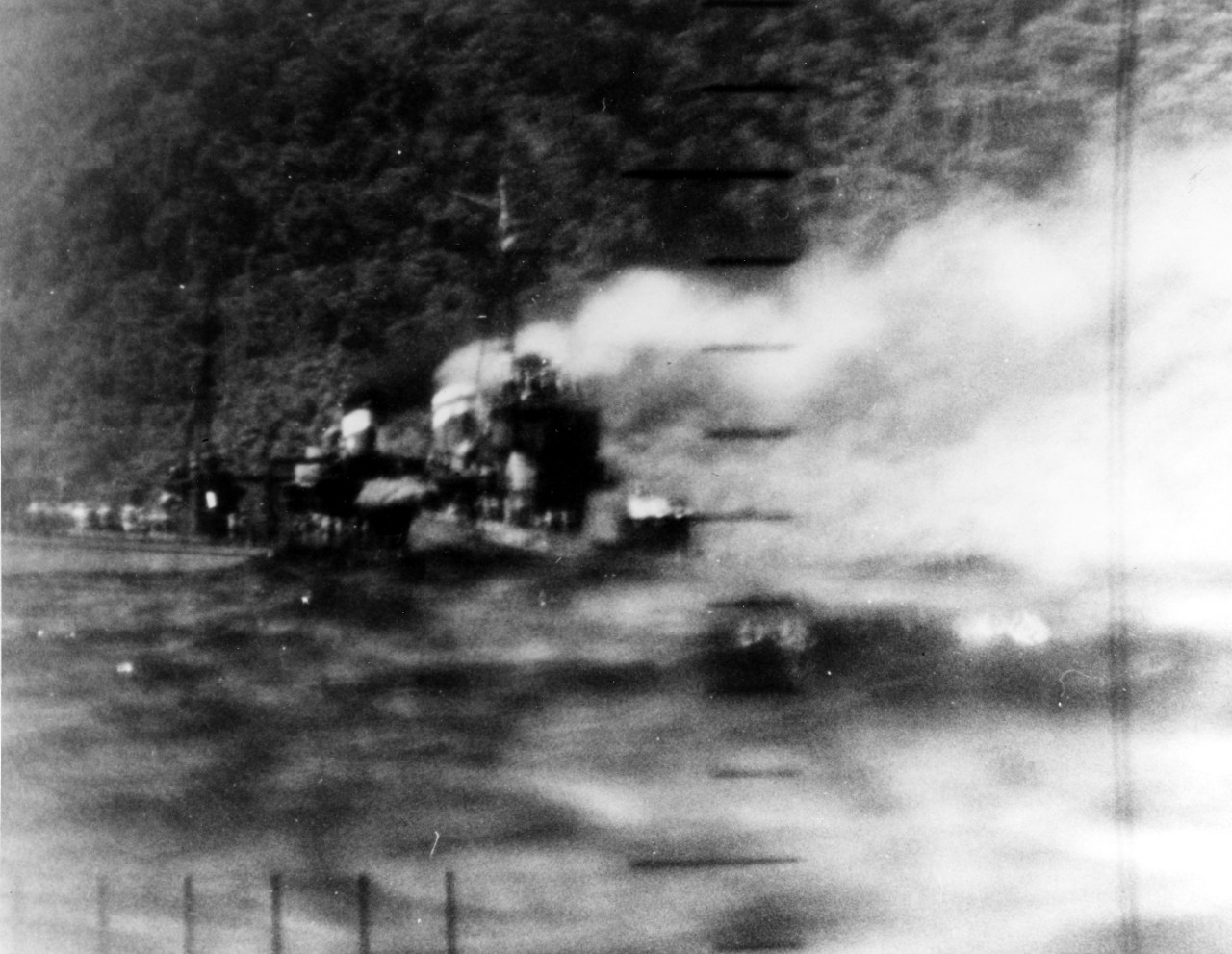 This H-gram covers the Spanish influenza outbreak of 1918–19, which killed 5,027 U.S. Navy sailors; the little-known sinking of the HMT Rohna by a German guided glide bomb, that resulted in the loss of over 1,000 U.S. Army troops; Operation Leader, the successful strike by USS Ranger (CV-4) north of the Arctic circle off Norway; the loss of USS Wahoo (SS-238) and her legendary skipper Mush Morton; the Battle of Vella Lavella, the last Japanese surface victory of World War II; and the end to Operation Rolling Thunder in the Vietnam War.

Back issues of H-grams (enhanced with imagery) can be found here, along with a lot of other cool stuff on NHHC’s website. Download a PDF of H-Gram 022 (5 MB).

During World War I, 431 U.S. Navy personnel were killed as a result of enemy action and 819 were wounded. However, 5,027 died as a result of the Spanish influenza epidemic between the fall of 1918 and spring of 1919, more deaths than at Pearl Harbor, Guadalcanal, or Okinawa. The peak of the epidemic in the U.S. Navy occurred from September to November 1918, during which 121,225 Navy personnel were admitted to the hospital, and many more were sickened. It is estimated that as many as 40 percent of the 600,000 sailors in the Navy in 1918 contracted the virus. The hardest-hit ship was the armored cruiser USS Pittsburgh (ACR-4) in Rio de Janeiro, Brazil, in October 1918, on which 663 (80 percent) of her crew contracted the virus and 58 died. During the epidemic, at least ten U.S. Navy nurses died as a result of aiding the afflicted and three of them would be awarded posthumous Navy Crosses. Worldwide, the pandemic is now estimated to have killed between 50 and 100 million people (3 to 6 percent of the world’s population at the time) and over 700,000 people in the United States, with a mortality rate of between 10 and 20 percent of those infected globally. (For more on the impact of the Spanish influenza on the U.S. Navy, please see attachment H-022-1.)

European Theater: Forgotten Valor—USS Pioneer (AM-105) and the sinking of HMT Rohna, the Worst Loss of U.S. Life at Sea

On 26 November 1943, a German Hs-293 radio-controlled, rocket-boosted glide bomb hit and sank His Majesty’s Transport (HMT) Rohna off the coast of Algeria, resulting in the deaths of 1,149 crew and passengers, including 1,015 U.S. Army troops (plus 35 U.S. soldiers who subsequently died from wounds.) The loss of Rohna constituted the greatest loss of U.S. life at sea due to enemy action. (During the attack on Pearl Harbor, 1,077 U.S. sailors died in port aboard the USS Arizona [BB-39], and 879 sailors were lost at sea in 1945 in the sinking of the cruiser USS Indianapolis [CA-35]). Approximately 1,192 crew and soldiers were killed in an accidental boiler explosion and fire aboard the Mississippi steamboat Sultana at the end of the Civil War in April 1865.) Over 1,100 survivors of Rohna were rescued, 606 of them by the minesweeper USS Pioneer (AM-105) at great risk to the ship due to ongoing German air attacks and risk of submarine attack. Under the command of Commander LeRoy “Roy” Rogers, USN, Pioneer’s crew repeatedly displayed acts of valor, diving into the cold water in the gathering darkness at great risk to their own lives to assist struggling soldiers. In order to keep the Germans from learning how successful the guided-bomb attack had been, a tight lid of secrecy was clamped down on the incident, which continued long after the war. The details of the sinking were not released until the late 1960s and remained obscure long after that. Presumably as a result of the secrecy, neither the crew of the Pioneer, nor the ship itself, ever received any kind of formal recognition from the U.S. Navy for their heroic actions in rescuing so many of their brother soldiers. (For more on the sinking of HMT Rohna and the subsequent rescue effort, please see attachment H-022-2.)

On 4 October 1943, the aircraft carrier USS Ranger (CV-4) launched two strike packages against German shipping targets along the coast of occupied Norway near Bodø (just north of the Arctic Circle) and Sandnessjøen, 100 miles to the south. Armed with excellent intelligence derived from breaking the German’s Enigma code and from the Norwegian Secret Intelligence Service, the raid caught the Germans completely by surprise and was a success. At least five German (or German-controlled) ships, including a large tanker and a troopship, were sunk or beached, and an additional seven or so damaged to varying degrees, for a loss of three aircraft due to anti-aircraft fire and one other due to operational mishap. Radar on Ranger detected German reconnaissance aircraft attempting to find the source of the strike, and two of three were shot down. One of the German aircraft was shot down by Lieutenant Junior Grade Dean S. “Diz” Laird and his flight lead, and the other by Diz alone. Diz would go on to be the only U.S. Navy ace to shoot down both German and Japanese aircraft, finishing the war with 5 ¾ kills. The raid on Norway, known as Operation Leader, was the first time U.S. Navy aircraft engaged German aircraft (aircraft from Ranger had engaged Vichy French aircraft during Operation Torch, the invasion of North Africa in November 1942) and, although successful, it would be the last time U.S. aircraft carriers conducted a strike against Europe. So, as for Ocean Venture and Trident Juncture 18, those Navy Sailors who participated in Operation Leader would say, “been there, done that…long before.” (For more on Operation Leader and Diz Laird, please see attachment H-022-3.)

On 11 October 1943, the submarine USS Wahoo (SS-238), under the command of the renowned Lieutenant Commander Dudley Walker “Mush” Morton, was sunk with all 79 hands by a sustained air and surface attack as she was attempting to exit the Sea of Japan via La Perouse Strait. At the time, all that was known was that Wahoo departed Midway Island on 13 September 1943 and was never heard from again, although intelligence derived from broken Japanese codes allowed her general movements to be tracked based on Japanese reporting of ship losses. She was listed as missing on 9 November after she failed to report as she was supposed to following her exit from the Sea of Japan. The commander of U.S. Submarines in the Pacific, Vice Admiral Charles A. Lockwood, recorded in his diary that, “This is the worst blow we have had.” At the time, under the aggressive and inspirational leadership of Mush Morton, Wahoo was the most successful submarine in the Pacific (after the war, she would be credited with sinking 19 ships under Morton, and Morton would be the third-most-successful submarine skipper in the war, even when Wahoo’s sixth war patrol was a complete bust due to defective torpedoes). Wahoo’s executive officer on five war patrols was Lieutenant Richard O’Kane, who would go on to be the most successful submarine skipper of the war.

After Wahoo was officially declared overdue on 2 December 1943, Lockwood put Morton in for a Medal of Honor (Morton already had three Navy Crosses), but the award was declined, possibly due to a controversial incident that occurred on Morton’s first war patrol (Wahoo’s third), in which Morton ordered Wahoo to fire on lifeboats with armed Japanese soldiers that had abandoned a ship (Buyo Maru) the submarine had sunk. It was not known until much later that many of those in the water and in the boats were British Indian Army prisoners of war being used as forced labor by the Japanese. There are some that argue that Morton committed a war crime (I’m not one of them), but the incident is a case study in the moral ambiguity that occurs in an existential war for survival and, in particular, with “unrestricted” submarine warfare. The wreck of Wahoo was found in La Perouse Strait in 2005, and subsequently conclusively identified; she was sunk as a result of a direct hit by a bomb from a Japanese aircraft. (For more on the Wahoo’s extraordinary service life, please see attachment H-022-4.)

On the night of 6-7 October 1943, a force of three U.S. destroyers attacked nine Japanese destroyers northwest of the island of Vella Lavella in the central Solomons. Despite advantages of radar, the new combat information centers (CIC) aboard U.S. ships, and improved doctrine, valor and audacity could not overcome numbers or the superior capabilities of Japanese torpedoes. Within a short span, the destroyer Chevalier (DD-451) had been hit by a torpedo, her bow blown off by a magazine explosion, and the destroyer O’Bannon (DD-450) got entangled in her wreckage, having collided from behind in the smoke of battle. Selfridge (DD-357), with squadron commander Captain Frank Walker embarked, continued to press the attack alone until she, too, was hit and crippled by a Japanese torpedo. With the three U.S. destroyers dead in the water and at his mercy, the Japanese commander opted to disengage, having lost one destroyer, and having been fooled by a grossly inflated report from a scout aircraft. Nevertheless, the Japanese force accomplished its mission to evacuate the last 589 Japanese soldiers on Vella Lavella before U.S. and New Zealand ground forces closed in. The Battle of Vella Lavella would be the last major battle of the Central Solomons campaign, and would also be the last significant Japanese victory of the war. Following Vella Lavella, the Japanese navy embarked on a sustained losing streak as its extensive losses in the Solomon Islands had taken their toll, and as U.S. improvements in integrating new technology, overwhelming numbers, and sheer aggressiveness turned the tide. Vella Lavella is also the first case I know of in which the U.S. commander fought the battle from the CIC rather than the bridge, a paradigm shift in naval warfare. (For more on the Battle of Vella Lavella, please see attachment H-022-5.)

On 31 October 1968, President Lyndon Johnson announced the end of Operation Rolling Thunder, the bombing campaign against North Vietnam, effective 1 November. The cessation was the result of ongoing secret negotiations between the United States and North Vietnam to set up formal peace talks in Paris. These discussions had been occurring since the spring of 1968 and the North Vietnamese had finally agreed to a U.S. demand that South Vietnam be included in the talks. The United States conceded to a role for the National Liberation Front (NLF—the Viet Cong guerrillas in South Vietnam) at the talks, with the understanding that this would not constitute formal recognition by the United States of the NLF. The bombing halt and commencement of peace talks would be followed by months of negotiations over the shape of the conference table. The war was far from over, and fighting (and bombing) in South Vietnam would continue much as before as the negotiations dragged on for years (and North Vietnam repaired damage, reconstituted forces, and improved defenses unmolested by U.S. bombing. The United States would resume bombing of North Vietnam during the Nixon administration (operations Linebacker and Linebacker II), and would mine Haiphong Harbor when the North Vietnamese launched a major conventional offensive into South Vietnam (complete with tanks) in the spring of 1972. I will write more about the end of Rolling Thunder and the continuation of the war in Vietnam in future H-grams, but I would recommend reviewing H-grams 011 and 017, which discuss the beginning of Rolling Thunder. I would also commend Rear Admiral (ret.) “Bear” Taylor’s Rolling Thunder blog. Bear took it upon himself to write a blog post every day for the duration of the 50th anniversary of Rolling Thunder (over 1,000 posts). It is a monumental and comprehensive work.