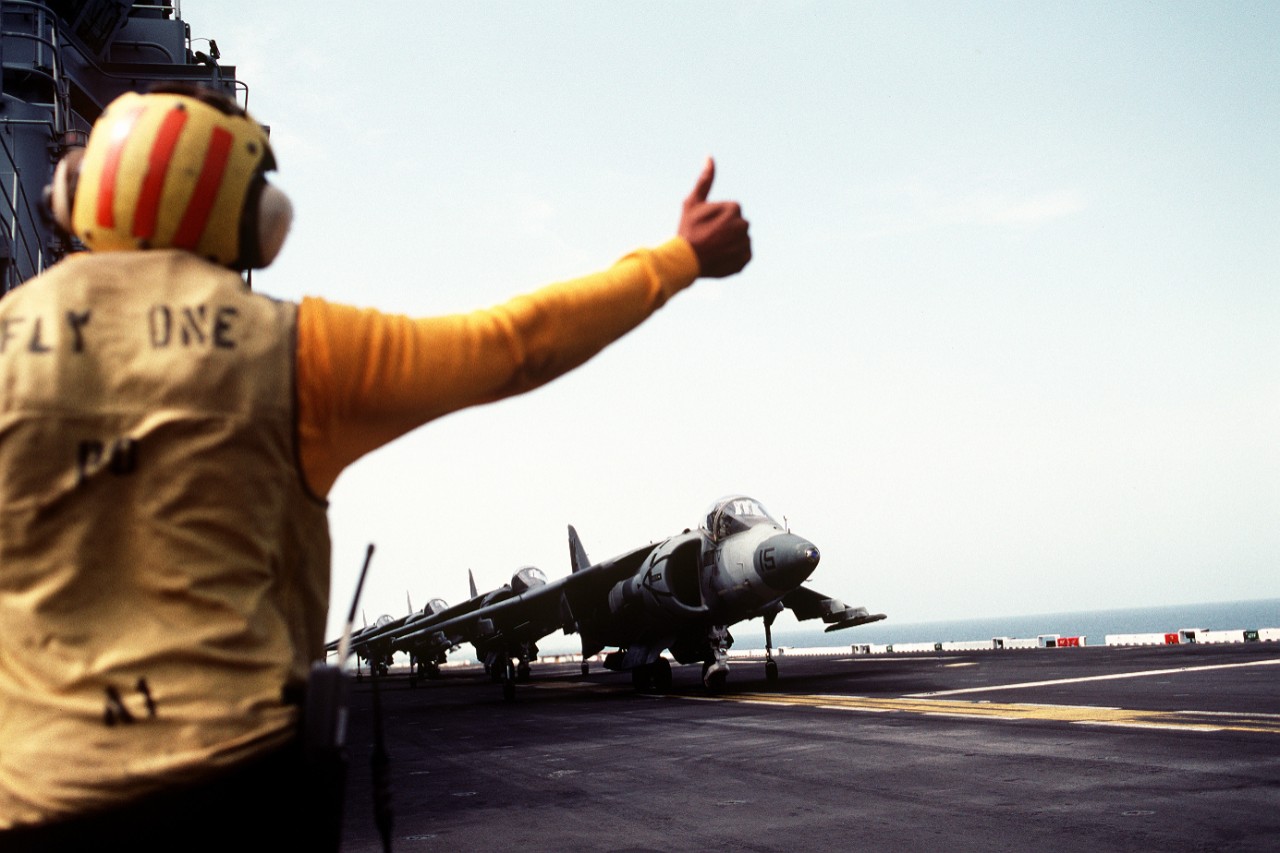 This series is a departure from my normal H-grams in that this is a personal recollection. I was the Iraqi Subject Matter Expert on the Intelligence Staff of Commander, U.S. Naval Forces Central Command for the entirety of Operations Desert Shield and Desert Storm, serving under VADM Hank Mauz and VADM Stan Arthur. I first wrote this recollection a number of years after the fact, but I kept it true to what I believed and understood to be true at the time, so my dim view of joint operations as conducted during Desert Storm (which held the Navy back from making a maximum contribution to the war) and U.S. Central Command, particularly the Intelligence Support Architecture, will be readily apparent. My reward for this heresy was to spend 12 of the next 21 years in joint commands, including three years as Commander of the U.S. Central Command Joint Intelligence Center, where I had opportunity to see significant improvement in U.S. joint operations.

The spectacular flaming orange full moon rose over the Patriot missile battery in the center of the airfield in Riyadh. The raw military might of the United States was on full display as dozens of C-5s, C-141s, and C-130s, gleaming in the moonlight, roared by in a continuous stream, disgorging one load of cargo after another, then taking off, to be replaced by more landing. I was mesmerized by the sinister beauty of the whole thing.

I also noticed a dozen E-3 AWACS and RC-135 Intelligence Collection aircraft parked wingtip-to-wingtip in a tight box on the opposite side of the airfield, presumably for protection against sabotage but I suspected more likely for ease of maintenance. “Guess they learned nothing from Pearl Harbor,” I thought. One lucky Scud ballistic missile hit and the whole lot of them would have been destroyed.

Despite our military power, the phone lines were completely clobbered and we couldn’t get a call through to Bahrain to find out what happened to the Navy C-12 that was supposed to pick us up and return us to Bahrain. Our mission had been a success so far, but it was about to turn surreal.

I’d led a small three-man team of Navy intelligence officers in that morning to meet with our Air Force counterparts. I’d secured an agreement to stand up a joint Air Force-Navy Iraqi Air Defense Analysis Cell in Riyadh to bring some sense of coherence to the Iraqi order-of-battle chaos that had resulted when all the national and theater intelligence agencies had hit the “send” button on their massive, conflicting, out-of-date, and inaccurate Iraqi databases. The Air Force agreed to provide space, equipment, and administrative support. We’d provide people and a DAMA satellite communications earth station (which turned into another saga). But, as the moon rose high in the sky, we realized we were stranded.

We were about to go searching for some place to spend the night when the colonel in charge of Air Force intelligence, who we’d met with earlier in the day, happened to drive by, and generously said we could stay in his villa in Eskan Village on the outskirts of Riyadh. The surrealism deepened.

Eskan Village consisted of hundreds of palatial villas that had been built by the Saudis to entice the Bedouin nomads out of the desert. The Bedouin wanted no part of it, and the village stood vacant for years, a classic “white camel,” until the Saudis let the Air Force have it at the start of Desert Shield. The Air Force had already turned it into a regular housing compound, complete with PX, gym, theater, pool, and officer and enlisted clubs. It was dark, so we couldn’t tell if there was a golf course.

We attended a BBQ cookout. I chatted with some invited Saudi officers in their traditional robes and headdress while watching women Air Force officers in short shorts and halter-tops playing volleyball. I’m not sure which of us was in bigger culture shock.

The colonel’s two story, five-bedroom villa had exactly one bed and one phone for furnishings, so we headed over to Gear Issue to get cots and bedding. There, we were informed by the master sergeant-in-charge that transient personnel were supposed to stay at the airfield back in Riyadh. Eskan was only for “permanent” temporary duty personnel. We could stay at Eskan, but regulations prohibited the issuance of bedding to transients. We convinced him to bend on the cots, since the regulations didn’t specifically prohibit issuing them to transients, and because we were unlikely to walk off with them. But he never budged on the bedding.

So we spent the cold October night on the cots covered by souvenir “Ski Saudi” t-shirts we’d just bought in the PX, for warmth. Each time one of us moved, the skin-to-fabric friction with the bedding-less cots made a breaking-wind noise. The room sounded like the classic “Blazing Saddles” fart scene. We had to take our cots to separate rooms to get some sleep.

The next morning, as we waited at the shuttle bus stop for a ride to the airfield, another Air Force master sergeant drove up in a huge Chrysler Imperial (or something like that). He explained the Saudis had issued one to every Air Force E-7 and up, with free gas thrown in.

The Master Sergeant took pity and drove us to a different airfield where we could catch a C-130 shuttle to Dhahran, Saudi Arabia, which would get us within 60 miles of Bahrain. However, we learned from the master sergeant-in-charge there that our military ID cards were insufficient. Without actual written orders he could not let us on the plane. Fortunately, “our” master sergeant had sufficient clout to bully the other one into putting us on the aircraft. We flew to Dhahran sitting on top of piles of cargo looking out the open rear ramp at the vast desert go by.

Arriving in Dhahran, we got our first call through to Bahrain. A driver was dispatched to pick us up. After hours waiting in vain, because the driver drove all the way to Riyadh instead of Dhahran, we found an off-duty Saudi shuttle bus driver. He agreed to drive us when it dawned on him that we were his ticket across the border for a weekend in the “sin city” of Bahrain (compared to Saudi Arabia), which had begun to come back to life with the realization that the Iraqis were apparently not going to keep coming. Every window on the bus was covered by drapes and it was decked out with enough knick-knacks and bric-a-brac to rival a Filipino Jeepney, but it got us back to our ship. I thought I had some idea how Odysseus felt.

Be careful what you ask for. A message came in via back-channels from the aircraft carrier USS Midway, which had left Japan about two months after us and was transiting to the Arabian Gulf. The message said that Midway was desperately short of charts of Iraq and the Arabian Gulf. The message continued that Midway had been unable to get charts at the small intelligence support facility in Subic Bay, because, “the Blue Ridge had taken them all.”

My boss had scrawled a, “what's the story?” on the message, and I suddenly had a sinking feeling that I might have been the cause of the problem. When we had pulled into Subic in late August I had sent my two intelligence specialists (IS) to the same facility to pick up Iraqi and Arabian Gulf charts, since we had none. My guys had asked, “How many do you want us to get, Mr. Cox?"”

Figuring such charts would be in short supply, I answered, “Take whatever they’ll give you.”

When the ISs returned, they reported that they had gotten “a bunch.” Pleasantly surprised, I said, “Great, give me a couple and stow the rest,” and I thought nothing more of it. Now, with message in hand, I asked one of my ISs to take me down to the chart vault. Sure enough, it was stuffed to the overhead with a whole truckload of Iraqi charts.

In response to my, “ugh…” my IS then volunteered, “When I asked for all the charts they would give me, they gave me all of them.”

It was a horrific accident; ten Sailors aboard USS Iwo Jima killed instantly by a super-heated steam rupture in the boiler room, their charred bones literally fuzed with melted metal due to the intense heat and pressure. Substandard bolts installed during boiler repairs by the shipyard in the United Arab Emirates were ultimately determined to be the cause. The descriptions of the accident details in the morning brief were among the most gruesome I’ve heard. It was by far the largest loss of life for the Navy in a single incident since the start of Desert Shield. The damage was not all that different from that experienced by the USS Stark in 1987 in the Arabian Gulf and the HMS Sheffield in 1982 in the Falklands War after they were hit by Exocet missiles. I sincerely hoped this was not an omen of things to come, but it left no doubt about the gravity of what we had to prepare for in the event we went to war with the Iraqis.

In the next episode – (Part IV November 1990) Mirage F-1 Exocet Roulette and CENTCOM “Every Man for Himself” Intelligence Architecture.

Source: (Me. Although I wrote these pieces by memory a number of years after the fact, the best pretty comprehensive source for information on the U.S. Navy during Desert Shield/Desert Storm is still the two-volume set of “Desert Shield at Sea: What the Navy Really Did” and “Desert Storm at Sea: What the Navy Really Did” both by Marvin Pokrant (the NAVCENT/C7F CNA Rep during both operations): Greenwood Press, 1999. (It wasn’t cheap.) Also useful is the Department of the Navy, Office of the Chief of Naval Operations, “The United States Navy in Desert Shield, Desert Storm” of 15 May 1991,” which has the best chronology and other facts and figures. I would note that these are more “PC” than my account.)