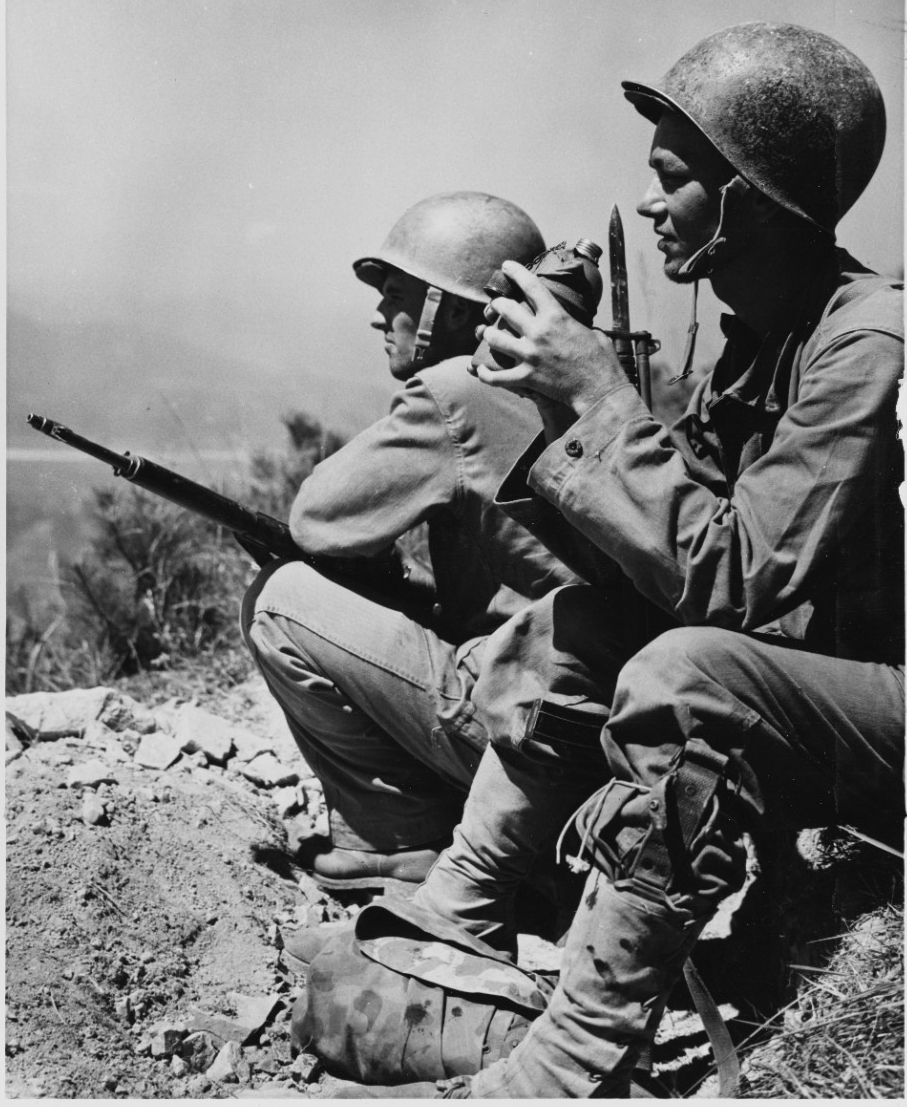 This H-gram covers the first two month of naval action in the Korean War, which started on 25 June 1950. Sometimes referred to as the “Forgotten War,” I plan to give it pretty thorough treatment because some of the amazing U.S. Navy action has indeed largely been forgotten.

Before dawn on Sunday morning, 25 June 1950, Communist North Korea launched a massive surprise attack across the border into South Korea, smashing through the inadequate South Korean defenses. Within three days, the North Korean People’s Army (NKPA) had captured the South Korean capital of Seoul and kept on going south, with little to stop it, while also overrunning the airfields that might have been of use to the U.S. Air Force. The attack not only took the South Koreans by surprise, it caught the United States unprepared for war.

To the extent that the United States was planning for war in 1950, it was almost exclusively focused on a potential Soviet invasion of Europe, which was to be deterred or won (on the cheap, relatively) by U.S. Air Force intercontinental bombers armed with atomic bombs. The U.S. Navy had repeatedly lost the budget and service roles and missions battles of the late 1940s; the size, capability, and readiness of the Navy was a pale shadow of what it had been at the Japanese surrender only five years before.

As it turned out, the U.S. Army was in even worse shape than the Navy, and the first combat actions between the U.S. Army and the NKPA were humiliating defeats for the Americans, with several thousand U.S. soldiers killed and captured as they were steam-rollered by superior NKPA armored forces and sheer numbers. It was also apparent that the massive U.S. Air Force investment in long-range nuclear bombers was useless in a war in which the object was to stop North Korean aggression, without getting into a full-scale war with the Soviet Union—i.e., a “limited war.” And, without airfields in Korea, the ability of Air Force tactical aircraft to affect the battle from bases in Japan was severely constrained.

The U.S. Navy presence in the Western Pacific in 1950 had been reduced to one aircraft carrier (Valley Forge, CV-45), two cruisers, and a handful of destroyers, which were severely short of ammunition and underway logistics support. Nevertheless, it was this naval force, augmented by a smaller British carrier (HMS Triumph) and other Allied ships under a (U.S.-led) United Nations command structure that played a key role in establishing command of the air and of the sea that prevented the U.S. Army from being thrown out of Korea. Without control of the vital sea lanes, there is little doubt that, by August 1950, the North Koreans would have been in possession of the entire Korean peninsula. It was U.S. Navy amphibious capability—as enfeebled as it was by budget cuts—that got a well-trained U.S. Marine brigade into Korea just in time to stiffen the defense of the Pusan Perimeter and prevent the last UN toehold in South Korea from being overrun.

The miniscule Republic of Korea Navy (ROKN) acquitted itself well, particularly in a small battle with major strategic consequences, when the largest warship in the ROKN (a submarine chaser) sank a North Korean transport with 600 troops embarked that were attempting a surprise seizure of the port of Pusan on 26 June 1950.

The U.S. and Allied navies were in the action almost immediately, with two U.S. destroyers covering the evacuation of U.S. and friendly foreign nationals from Seoul on only the second day of the war. On 2 July 1950, light cruiser Juneau (CL-119) and two Allied ships sank three of four North Korean PT-boats and two of two motor gunboats in the Battle of Chumonchin Chan. This was the first and last surface engagement between the U.S. and North Korean navies, as it convinced the North Koreans to never try that again (at least until the Pueblo—AGER-2—incident in 1968).

On 3 July, Valley Forge and Triumph (both in Task Force 77) caught the North Koreans by surprise with a strike from the Yellow Sea right into their capital of Pyongyang. The  action that resulted in the first air-to-air kill by a U.S. Navy jet fighter, when an F9F Panther flown by Lieutenant (j.g.) Leonard Plog downed a piston-engine North Korean Yak-9 fighter. This was also the combat debut of the Panther and the new AD-4 Skyraider attack aircraft. Although hampered by lack of underway ammunition resupply and refueling, the two carriers bounced back and forth between the Yellow Sea and the Sea of Japan, so the North Koreans could never be sure from which direction they would be hit.

U.S. Navy aircraft played a critical role in interdicting North Korean troop movements and supply lines, which became increasingly vulnerable the farther the NKPA advanced.  This forced increased North Korean resupply via small coastal craft, which the ROKN (beefed up with several more sub-chasers) proved very adept at catching and destroying. On the other hand, close air support procedures between the .U.S. Navy, Air Force, and Army proved to be completely bolloxed up, in need of urgent fixing. 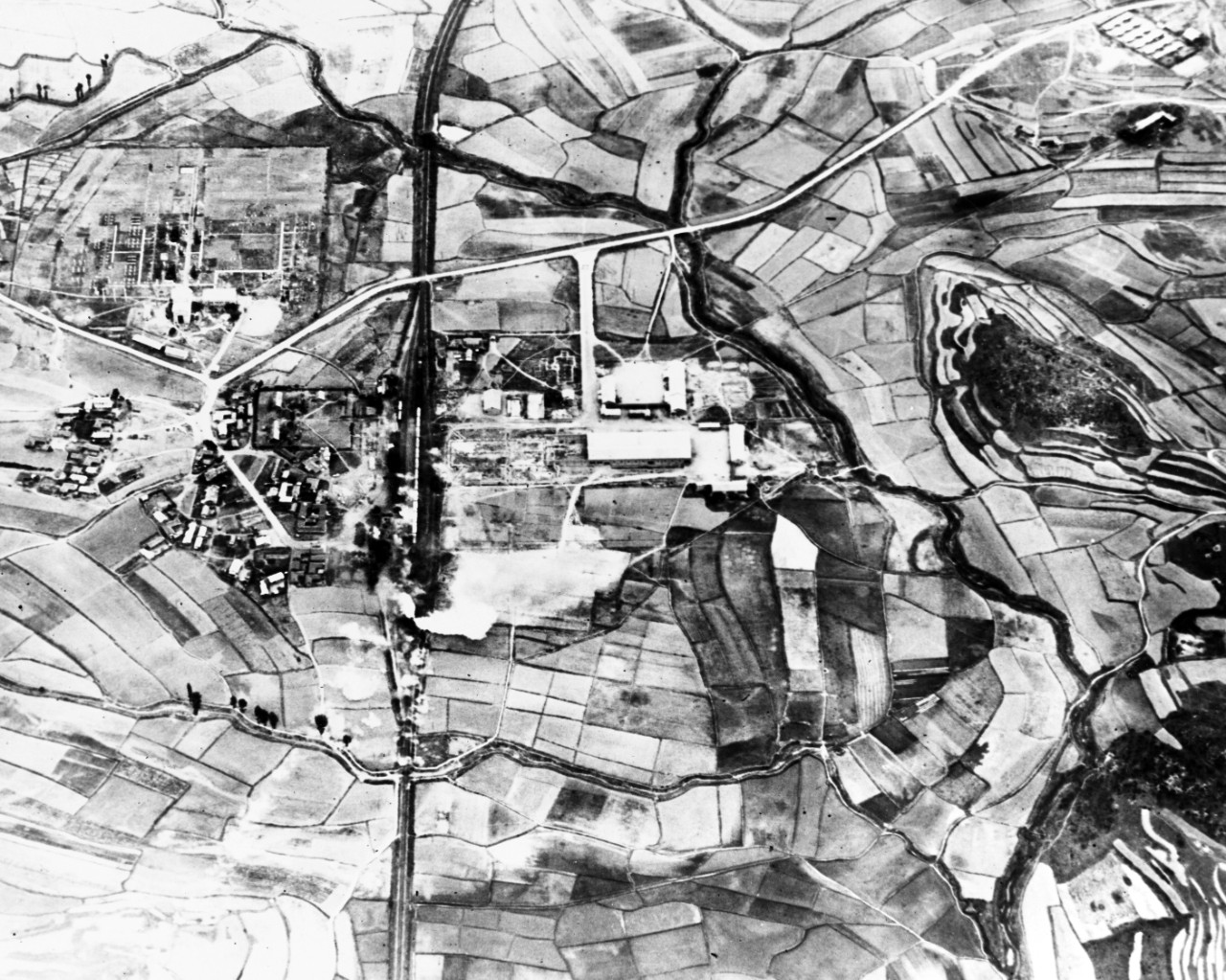 Bombardment by Allied ships on the west coast (especially challenging given the extreme tidal conditions) and by (primarily) U.S. ships on the east coast made the North Koreans pay a heavy price for their advance. Naval gunfire on the east coast became even more effective when the heavy cruisers Helena (CA-75) and Toledo (CA-133), with their 8-inch guns, arrived within a month to augment Rochester (CA-124). U.S. surface ships ranged far to the north along the Korean coast shelling key North Korean ports. The destroyer Mansfield (DD-728) put a raiding party ashore in North Korea to blow a key tunnel on the railroad bringing supplies in from Vladivostok, Soviet Union. This was followed by submarine transport Perch (ASSP-313) putting a British commando party ashore in a similar operation. U.S. and UN warships played a key role in keeping the northern end of the Pusan Perimeter from collapsing.

Compared to the massive casualties being suffered by the U.S. and ROK armies, the cost to the U.S. Navy in the first months of the war was relatively light, with only a handful of aircraft shot down (and even more lost to operational causes than the enemy). However, the first Navy Cross went posthumously to Commander Raymond Vogel, the commander of Air Group 11 (CVG-11), who was shot down while dropping a span on the Han River Bridge in Seoul on 19 August 1950.

Although Navy, Air Force, and Marine Corps aircraft inflicted massive losses to North Korean troops, tanks, and supply lines, the North Koreans just kept attacking. At the end of August 1950, the issue was still very much in doubt as to whether the Pusan Perimeter would hold.

That the U.S. Navy accomplished anything at all was a testament to the leaders and sailors who hadn’t forgotten how to win, despite shortfalls in just about everything. In 1949, the general consensus in the new unified Department of Defense was that the Navy was obsolete, and the Secretary of Defense cancelled the next-generation aircraft carrier (United States, CVA-58) and gave orders to reduce the number of operational fleet carriers from eight to four. An additional draconian budget cut in mid-1949, if implemented, would have meant putting every aircraft carrier into mothballs, along with the last battleship that wasn’t already in reserve. Upon the outbreak of the Korean War, the Truman administration suddenly discovered that a navy really truly can come in handy, and can do things that strategic bombers and atomic weapons can’t. So, in some respect, the U.S. Navy can thank Kim Il-sung (grandfather of today’s “Dear Leader”) for showing the rest of the Defense Department the error of their ways.

For more on the U.S. Navy’s role in the first months of the Korean War, please see attachment H-050-1.

As always, you are welcome to forward H-grams in order to spread these stories of U.S. Navy valor and sacrifice. Back issues of H-grams enhanced with photos may be found here.