H-Gram 032: Operation Forager and the Battle of the Philippine Sea 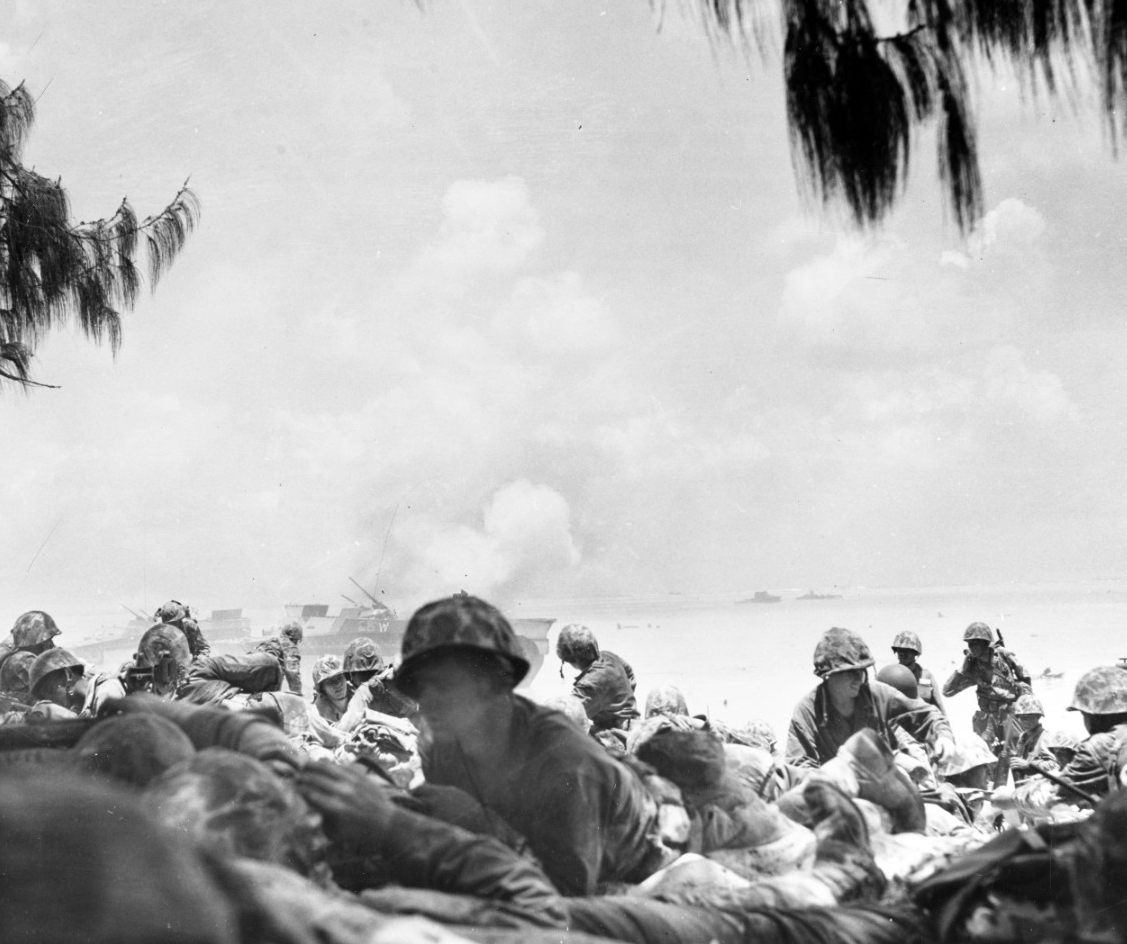 Saipan, 15 June 1944: Marines of the first invasion wave hug the beach and prepare to move inland. Note burning LVT in the background (USMC 81840).

The Invasion of the Marianas and Victory in the Philippine Sea

This H-gram covers Operation Forager, the invasion of the Marianas (initially Saipan on 15 June 1944) and the major components of the Battle of the Philippine Sea, specifically the “Great Marianas Turkey Shoot” and the sinking of two Japanese carriers by U.S. submarines on 19 June 1944, and the extreme-range “flight beyond darkness” on 20 June 1944.

Just after 0900 on 19 June 1944, in an action that typified the extreme bravery and utter operational futility of the Imperial Japanese Navy in the Battle of the Philippine Sea, Warrant Officer Sakio Komatsu deliberately crashed his Jill torpedo bomber into a torpedo heading for his ship, the aircraft carrier Taiho. Although Komatsu’s courageous sacrifice destroyed the inbound torpedo, five others fired from submarine Albacore (SS-218) continued toward Taiho, the largest and newest carrier in the Japanese navy and flagship of Vice Admiral Jisaburo Ozawa’s First Mobile Fleet. Four missed, but despite the failure of Albacore’s target data computer, one torpedo hit the carrier, setting in motion a six-hour saga of struggle by her crew to save their ship even as she continued to operate, ultimately culminating in a massive explosion that doomed her and much of her crew despite yet another hour of valiant damage control.

In the time it took for Taiho to die, the carrier Shokaku fought and lost her battle to live. Shokaku was hit by three or four torpedoes from submarine Cavalla (SS-244), which narrowly escaped destruction herself. The crew of Shokakau, the battle-scarred veteran of Pearl Harbor, Coral Sea, Eastern Solomons, and Santa Cruz, who had saved their ship twice before from devastating bomb damage, were this time no match for the torpedoes (which finally worked the way they were supposed to). They fought for over an hour to keep her from sinking, but, in the end, Shokaku took over 1,200 of her loyal crew to the bottom.

Meanwhile, just as the Pacific Fleet intelligence officer Edwin Layton had predicted (although, unlike at the Battle of Midway, this time he was one day off in forecasting the start of the battle), the Japanese force of nine aircraft carriers with 440 embarked aircraft had sortied to give battle for the first time in almost two years, their hand forced by the arrival of 127,000 U.S. Marine and Army personnel and 535 ships off Saipan. A successful U.S. landing on Saipan would put the imperial palace in Tokyo in range of the new U.S. B-29 bomber. In an attempt to prevent that from happening, the Japanese launched Operation A-Go, intended to be the “decisive battle” to determine the fate of the empire. Actually it was, but not the way the Japanese intended, for with the loss of Saipan everyone at the highest level of Japanese government and military (and for the first time amongst the civilian population) knew that there was no way that Japan could win this war. It was only a question of how many would die on both sides to prolong the inevitable. The land battle would be a taste of things to come, as determined Japanese resistance, practically to the last man (and suicide of thousands of Japanese civilians) would cost the U.S. Marines and Army 3,400 dead and missing, making Saipan the deadliest campaign of the Allied Pacific offensive to date.

As the two Japanese carriers struggled to stay afloat, their aircraft were already airborne and heading for the U.S. Fifth Fleet covering the landings at Saipan. In four raids from the nine carriers, 326 Japanese carrier aircraft threw themselves at the 15 carriers (seven fleet and eight light carriers) and seven fast battleships of Vice Admiral Marc Mitscher’s Task Force 58, running into a buzz saw of 450 Hellcat fighters. With the aid of early tactical warning from radio intelligence detachments, and radar-directed intercepts controlled by fighter direction officers in new combat information centers (CIC), the overwhelming numbers of technologically superior Hellcats, flown by much better trained pilots, cut the Japanese formations to ribbons. About 224 of the 326 inbound strikers (the largest Japanese carrier raid of the war since Pearl Harbor) fell to the guns of fighter aces like David McCampbell and Alex Vraciu, along with others who became “ace-in-a-day.”

The great majority of the enemy pilots were hastily and inadequately trained rookies, poor replacements for the extraordinarily capable, but irreplaceable, pilots of Japanese naval aviation lost in the battles earlier in the war. The relative ease with which the Japanese planes, especially the bombers, could be brought down, earned the action the name “Great Marianas Turkey Shoot,” which, however, doesn’t do justice to a few of the Japanese pilots who took some Hellcats with them.

However, also in a portent of things to come, and despite staggering losses, the Japanese aircraft that survived the fighter gauntlet kept coming. The inexperienced pilots expended themselves in futile attacks against the heavily armed and armored U.S. battleship force. For their sacrifice they achieved a few dents. Still, a handful of aircraft made it through to the U.S. carriers, but the aim of their bombs did not match their courage. These pilots still wanted to live, so damage was light. This would change in several months as desperation set in amongst the Japanese.

Late on the next day, the pilots and aircrews of TF 58 would prove their courage to be as great as the Japanese, as 226 planes launched on an extreme-range twilight strike at the remaining Japanese force. They knew that many would not have the fuel to make it a round trip and those that did would have to recover at night, for which almost none of them had trained. The results of the valiant strike were viewed as a disappointment for a number of reasons; one more Japanese carrier would be sunk (Hiyo) and four damaged. However, by the end of that day, Ozawa still had six carriers, but only 35 operational aircraft. The epic “flight beyond darkness” of the U.S. carrier aircraft culminated in Mitscher’s bold action to risk his carriers and “turn on the lights,” which saved many aviators from going into the water, although 86 planes still did. Fortunately, a massive search effort saved the great majority of those who didn’t make it back to their carriers.

The Battle of the Philippine Sea was a catastrophic defeat for the Japanese navy, with the loss of three fleet carriers and about 476 aircraft destroyed in the air and on the ground (including scouts and land-based naval aviation), and about 3,000 dead, in exchange for 42 U.S. Navy aircraft lost in combat (about 123 total from all causes) and 109 pilots, aircrew, and ship’s crew, an even more lopsided victory than the Battle of Midway. That didn’t stop the recriminations on the U.S. side regarding Fifth Fleet commander Admiral Raymond Spruance’s controversial decision to keep the carriers of TF 58 on a short tether to ensure the protection of the all-important landings on Saipan, rather than unleashing the carriers to roam in search of the enemy. Adherents of either position will find plenty of ammunition in attachment H-032-1.

I regret this H-gram came out a few days later than intended, but I was overwhelmed by the research for two massive amphibious invasions on opposite sides of the globe only a few days apart (Operation Neptune, the invasion of Normandy, and Operation Forager, the invasion of the Marianas). That the Unites States could pull off two such operations so close together, one of them across an expanse of thousands of miles, is a story in itself.

“Back issues” of H-grams, enhanced with photos and charts, can be found here, along with other interesting history on the NHHC website. As always, further dissemination is welcome, especially to the Fleet, so that our Sailors and commanders can better understand the legacy of valor that is their charge to uphold. 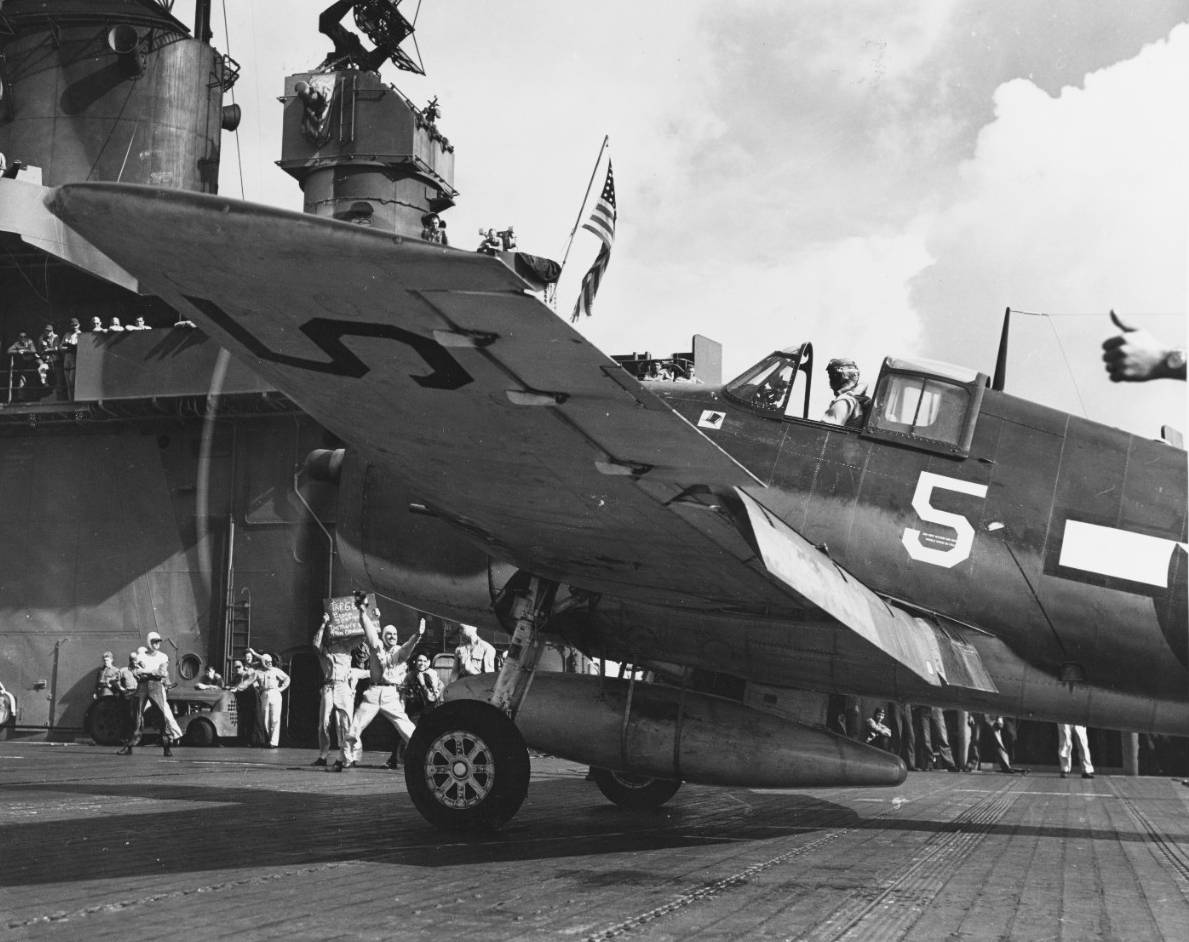 A VF-1 "Top Hatters" F6F-3 Hellcat fighter is launched from USS Yorktown (CV-10) to intercept enemy forces during the "Great Marianas Turkey Shoot", 19 June 1944. Note the target information board being displayed in front of the carrier's island beyond the aircraft's propeller (80-G-248440).