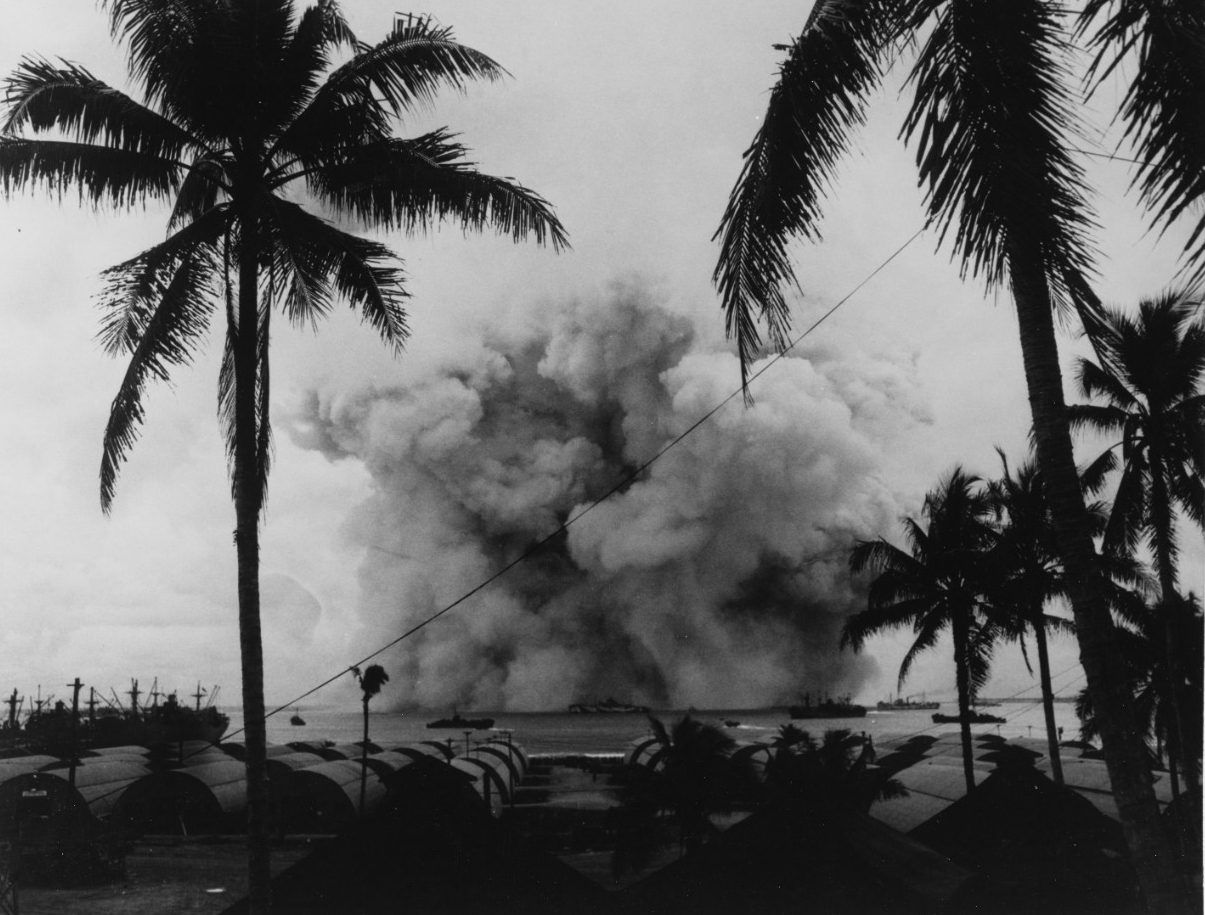 At 0855 on 10 November 1944 in Seeadler Harbor, Manus Island, Admiralty Islands (near New Guinea), an explosion occurred amidships near the Number 3 and Number 4 holds on the new ammunition ship USS Mount Hood (AE-11). Moments later, a massive blast of the 3,800 tons of ordnance aboard obliterated the ship and killed every one of her over 300-man crew who were aboard. The explosion dug a crater on the bottom, 35 feet below, 1,000 feet long, 50 feet across, and 30–40 feet deep. The largest piece of the ship found was 16 by 10 feet. No human remains were recovered.

On the nearby (350 yards) repair ship USS Mindanao (ARG-3), all personnel topside were killed outright by the explosion, and the ship was perforated by shrapnel. Eighty-two of Mandanao’s crew were killed, and 100 were wounded. Twenty-two small craft and boats were sunk. Shrapnel fell up to 2,000 yards from the center of the explosion. Personnel were knocked to the ground or deck up to 4,500 yards away. Eighteen larger ships were damaged to some degree, including the escort carriers USS Saginaw Bay (CVE-82) and USS Petrof Bay (CVE-80), a destroyer, and four destroyer escorts. In total, 372 were killed (including 327 missing) and 371 were injured. One of Mount Hood’s crew was killed aboard Mindanao, and one was injured in a boat alongside Mindanao. Eighteen of Mount Hood’s crew were away from the ship and survived, including a shore party of 14 men, two of whom were being taken to the brig ashore for court-martial. Their charges were dropped.

The board of inquiry was unable to determine an exact cause, but did identify numerous somewhat astonishing unsafe practices aboard Mount Hood—especially considering the previous ammunition-handling disasters earlier in 1944 at Port Chicago, California (over 300 killed), and West Loch, Pearl Harbor (over 160 killed). (See H-Grams 029, 032, and 033.) The board speculated that the accident could have been caused by a TPX-loaded depth bomb striking a hatch while being loaded into the Number 3 or 4 hold. The board also concluded:

Interestingly, Fleet Admiral Nimitz’s endorsement of the board of inquiry findings noted, “It is the opinion of the Commander in Chief, U.S. Pacific Fleet that the question of negligence is not involved but rather that the technical mistakes by the above named officers [which are redacted] were errors in judgment resulting from a keen desire to meet necessary military commitments and move on with the progress of the war. The exigencies of war will always require the acceptance of certain operational hazards.”

The summary of the report of the board of inquiry findings was sent out to the rest of the Navy, dated 15 August 1945, which proved too late to save the cargo ship USS Serpens (AK-97). The ship exploded and sank off Lunga Point, Guadalcanal, on 29 January 1945. Serpens was a Liberty Ship that had been taken into the Navy and commissioned in May 1943, but was manned by a U.S. Coast Guard crew. Three of her holds had been converted for ammunition stowage. The massive blast killed 196 Coast Guardsmen, 57 U.S. Army stevedores, a Public Health Service doctor, and a soldier ashore hit by shrapnel. Somewhat miraculously, two crewmen on the ship survived. This was the largest loss of U.S. Coast Guard life in a single incident in history. Initially the explosion was thought to have occurred due to enemy action but, after the war, was determined to be of an internal cause.

Sources include: "The Explosion of The USS Mount Hood" on jag.navy.mil, which interestingly redacts all the names (except casualty lists) from the report and endorsements, as if no one could figure out who “(redacted), Fleet Admiral, U.S. Navy, Commander in Chief, United States Pacific Fleet and Pacific Ocean Areas” is; NHHC’s Dictionary of American Naval Fighting Ships (DANFS).