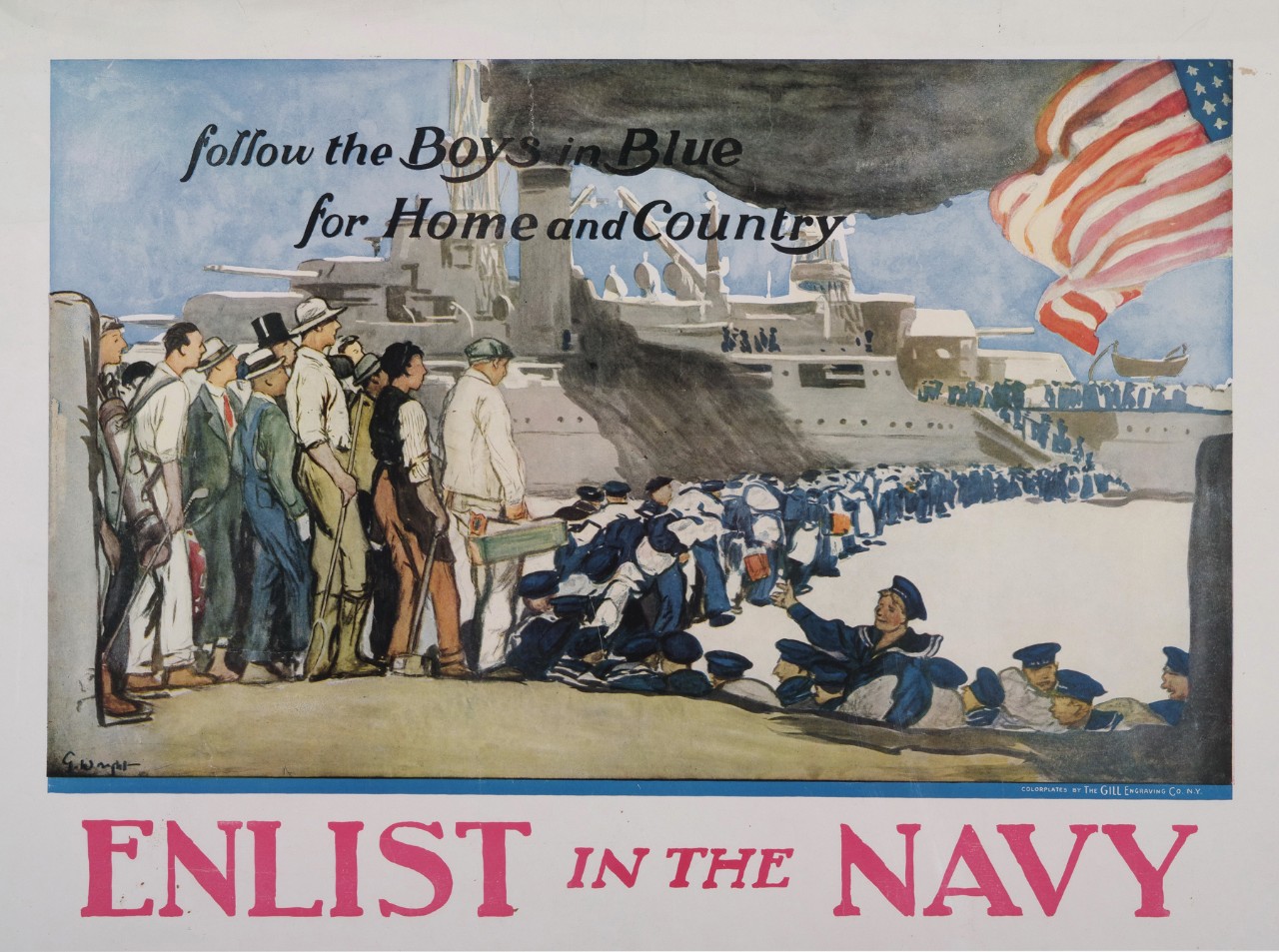 The first U.S. shot of World War I was fired on 7 April 1917 by a Marine embarked on the old U.S. Navy iron-hulled steam schooner USS Supply, at Guam, attempting to prevent the German auxiliary cruiser SMS Cormoran II from scuttling itself in Apra Harbor, where she had been interned since 1914. The Cormoran II still blew herself up and sank, with the loss of seven (or nine) German lives. The lesson is that when war comes, it may come in a place least expected. For more detail see attachment H-004-1 SMS Cormoran II.

In response to German resumption of unrestricted submarine warfare, the United States declared war on Germany on 6 April 1917.  In response to a desperate British need for destroyers to counter German U-Boats, which were sinking merchant ships at a grave rate, the U.S. quickly deployed a division of six destroyers to the United Kingdom, under the command of Lieutenant Commander Joseph Taussig, which arrived in Queenstown (now Cobh, Ireland) on 4 May. Although Taussig didn't actually say the famous quote attributed to him—"We are ready now, sir!"—the gist was essentially correct, and the destroyers very rapidly integrated into Royal Navy fleet operations. Taussig's destroyers were the first U.S. combat forces to arrive in the European theater, and the first U.S. Navy forces to ever operate under foreign command. Other divisions of U.S. destroyers arrived soon after, aided by the use of underway refueling, which had just been invented on the fly by Commander Ernest J. King, and Lieutenant Commander Chester Nimitz. Another U.S. technological innovation, reliable radio-telephone, would significantly improve anti-submarine warfare tactics. Although in many respects the U.S. Navy muddled through World War I, and was far from ready for war, the U.S. Navy nevertheless succeeded in ensuring the safe arrival of 2,000,000 U.S. troops in Europe in 1917/18, despite the severe U-boat threat, which broke the years-long bloody stalemate and led to the rapid defeat of Germany. Future H-Grams will cover the U.S. Navy's impact on the war, but attachment H-004-2 discusses more detail about the U.S. entry into the war and initial U.S. Navy operations. Attachment H-004-3 shows a photo taken shortly after the war of Assistant Secretary of the Navy, Franklin D. Roosevelt with the famous painting "Return of the Mayflower" depicting the arrival of Taussig's destroyers hanging in his office (and which later hung in the White House Oval Office.) With Roosevelt in the photo is Rear Admiral William S. Sims, returned from duty as a Vice Admiral in charge of U.S. naval forces in Europe, and Rear Admiral Josiah McKean, acting CNO after CNO Benson retired.

On the morning of 18 April 1942, 16 U.S. Army Air Force B-25B Mitchell twin-engine bombers, led by Lieutenant Colonel James H. "Jimmy" Doolittle, launched from the flight deck of the carrier USS Hornet (CV-8) and bombed targets in Japan, the first strike by the U.S. against the Japanese homeland since Pearl Harbor. The raid was a huge boost to U.S. morale.  Damage to military targets was good for the limited number of aircraft employed, but the psychological effect on the Japanese was profound. All 16 aircraft were lost (none were shot down over Japan, but 15 crashed in or off the coast of China after running out of fuel and one was interned by the Soviets when it landed near Vladivostok.) The human cost was seven aircrewmen dead (three killed in bailout/ditching, and of eight POW's, three were executed and one starved to death.) As many as 250,000 Chinese men, women, and children were killed in a three-month Japanese campaign of retaliation for Chinese assistance to the Raiders, including use of bacteriologic agents from Japan's infamous "Unit 731." Attachment H-004-4 discusses the Navy origins of the Doolittle Raid and the raid's consequences.

Although my H-grams tend to concentrate on command decisions, I will also periodically highlight a few of the many exceptional acts of valor displayed by enlisted Sailors throughout the history of the U.S. Navy. Attachment H-004-5 highlights the actions of Aviation Machinist Mate First Class Bruno Peter Gaido during the raid on the Japanese held-Marshall islands by the carrier USS Enterprise (CV-6) on 1 February 1942. During an attack by Japanese bombers, Gaido jumped into the back seat of a parked SBD Dauntless dive bomber on the flight deck, and used the aircraft's rear guns to shoot down a Japanese bomber intent on crashing into the Enterprise. The wing of the crippled bomber cut the tail off Gaido's plane, yet Gaido continued to fire, and then extinguished a fire left by bomber remnants. Spot-promoted from Third Class to First Class by Vice Admiral William Halsey for his actions, Gaido was later captured and tortured by the Japanese at battle of Midway, and after revealing nothing of value, was thrown over the side to drown. Gaido was awarded the Distinguished Flying Cross posthumously.