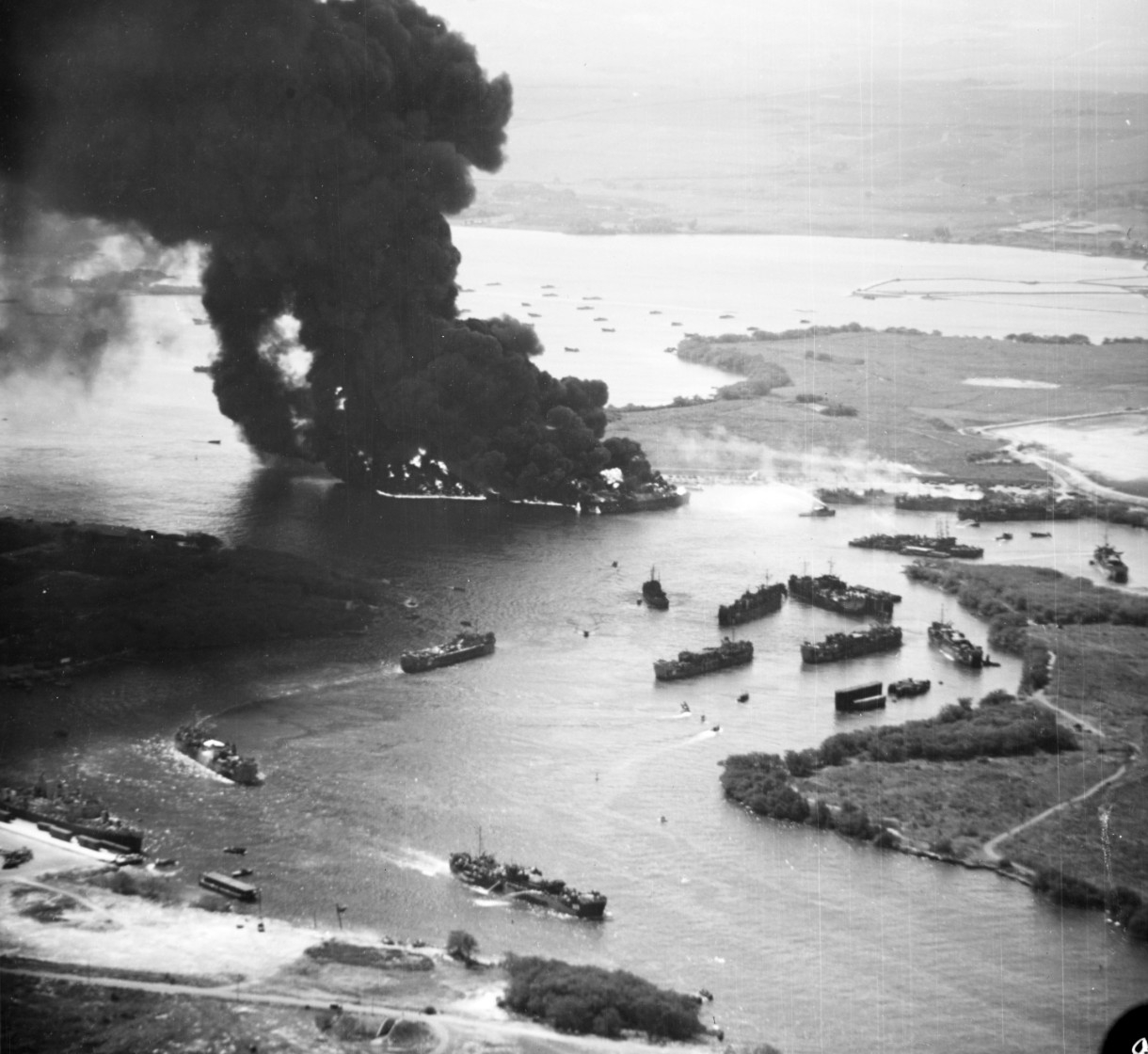 Pearl Harbor LST explosion, 21 May 1944: Aerial photograph of Pearl Harbor's West Loch, showing the burning LSTs at berths T-8 and T-9. Some LSTs are manuevering in the foreground, leaving the vicinity of the explosions and fire, while other ships have yet to get underway (80-G-276907).

Although the explosion aboard the Iowa (BB-61) on 19 April 1989 was the last major U.S. Navy ordnance accident, it was unfortunately far from unique. During the 1800s, “ordnance accidents” were very common but usually killed only individuals or small groups of crewmen. It was the advent in the late 1800s of armored turrets, designed to protect the guns and their crews from incoming enemy fire, that caused ordnance accidents to become more lethal, as the explosions and fires would be confined within the turret. These explosions and fires frequently killed the entire gun and handling crews inside—unless the ammunition magazine blew up, in which case the entire ship would be lost.

The first major recorded ordnance accident in U.S. Navy history occurred on 23 August 1814 when Gunboat 146 blew up due to a magazine explosion, killing nine crewmen. (Of note, during the engagement between the Continental Navy frigate Randolph and the British ship-of-the-line HMS Yarmouth on 7 March 1778, in total darkness, Randolph blew up and sank with the loss of 301 of her crew including Captain Nicholas Biddle. Only four survived. The exact cause of the explosion is unknown but was either due to British fire or an accident involving the powder magazine during the battle.)

For many years the most notorious ordnance accident on board a U.S. Navy ship was the explosion of a newly designed 12-inch gun called the “Peacemaker” aboard the screw steamer Princeton, with President John Tyler and 400 guests embarked, on 28 February 1844 on the Potomac River near Mount Vernon. When the gun burst, it killed the Secretary of the Navy, the Secretary of State, the President’s enslaved servant, and three others, and injured 20 more. By luck, President Tyler was below deck and was not injured.

The Navy board of inquiry was unable to determine a cause of the blast yet exonerated the white officers of any blame (there were no black officers then), implying that somehow the accident was the fault of the black enlisted stevedores. With the cause unknown, and no new safety procedures implemented, the black stevedores were ordered to resume ammunition loading. Several hundred (initially 328, then 258) of them balked in what came to be known as the Port Chicago Mutiny. Eventually, 50 of the Sailors were convicted of mutiny at court martial (initially receiving sentences of 15 years’ hard labor, which were significantly reduced on appeal and with the end of the war). Serious questions about the fairness of the trial were raised at the time (some by NAACP lawyer Thurgood Marshall, who went on the be the first black U.S. Supreme Court Justice) and the entire proceeding remains controversial to this day. The disaster did spur U.S. Navy leadership (led by CNO Admiral Earnest J. King) to accelerate the integration of blacks into more and more jobs in the Navy, including at the officer level. The incident (along with the West Loch disaster in May 1944) also resulted in massive overhaul of procedures and training for ammunition handling.

A tight lid of secrecy was clamped over the event to keep the Japanese from knowing (despite the fact that many thousands of Pacific Fleet personnel at Pearl Harbor could see the massive pall of smoke). As a result, casualty figures and estimates vary widely. The official Navy figure for casualties was 163 killed and 396 wounded, but this does not appear to account for Marines or Army stevedores who were present. Different reports for the number of Marine deaths range from about 80 to 299 (some of the Marine deaths may have been rolled into Marianas casualty numbers). There appears to be no accurate Army stevedore count (or any count at all, for that matter). The Naval Board of Inquiry was unable to determine the exact cause but reached the conclusion that a mortar shell had gone off on LST-353, either because it had been dropped or because a gasoline fire had set it off. Mortar shells were in fact being offloaded from the LCT—piggy-backed on LST-353 (because the mortars on the LCTs had proved in training to be wildly inaccurate) and a number had been dropped by the inexperienced stevedores (who had received no special training), although none had exploded. There were also containers of high-octane gasoline on the LST decks. (Some of the containers were open, as gasoline was being used by Marines to protect weapons from salt corrosion.)  There was also welding going on, as well as credible reports of careless smoking—i.e., the whole thing was a disaster waiting to happen, and it did. Nevertheless, the surviving LSTs departed for the Marianas operation only one day late; additional LSTs were scrounged, and Operation Forager went ahead as planned and on schedule.

A plaque, emplaced by Zellars’s classmates, in Dahlgren Hall at the U.S. Naval Academy, states, “Flaming death was not as swift as his sense of duty and his will to save his comrades at any cost to himself. His was the spirit that makes the service live.” The Sumner-class destroyer, Zellars (DD-777) was named in his honor, earned five battle stars in World War II and Korea, survived a kamikaze hit off Okinawa, and was transferred to the Iranian Navy as Babr in 1973. The original memorial marker to the explosion, which had fallen into disrepair in San Pedro, is now preserved aboard the museum ship Iowa, next to the ship’s number 2 turret, in which 47 crewmen were killed in an explosion in April 1989. Before he died, Captain W. D. Brotherton (skipper at the time, and found accountable by the court of inquiry) asked to be buried next to a victim of the explosion at Point Loma.

When she was new in 1903, Missouri held the record as the world’s fastest battleship. William F. Halsey, recently graduated from the U.S. Naval Academy, was on the bridge of the Missouri during the fire and as a result developed a severe dread of Friday the 13th, which as a captain and admiral affected when he would order ships to get underway (or not, if it happened to be Friday the 13th.)

Princeton was the latest and greatest in the U.S. Navy, designed by John Ericsson (who later designed the ironclad Monitor) and was the first warship with screws and machinery located entirely below the waterline to avoid vulnerability to enemy gunfire, as well as many other innovations, including an iron hull. The ship was initially armed with twelve 42-pound carronades along the hull, as well as one 12-inch long gun (designed by Ericsson and named the “Oregon” but made in England) that could swivel from side-to-side. However, Captain Stockton (the commissioning CO) wanted a second long gun and commissioned one to be made in Philadelphia, which when complete was named the “Peacemaker.” Both guns fired the same 12-inch 225-pound shot, but were manufactured differently; the Peacemaker was bigger, more impressive, but as it turned out, weaker.

On the day of the accident, Princeton departed Alexandria, Virginia, with President Tyler and about four hundred guests on board, including former First Lady Dolly Madison. The Peacemaker was fired three times on the down-river trip. On the up-river trip, it was loaded to provide a salute to George Washington when passing Mount Vernon, and burst on one side when Stockton pulled the lanyard. The aftermath was an ugly series of recriminations between Ericsson and Stockton, although the Navy Court of Inquiry whitewashed everything. The disaster did lead to major improvements in gun manufacturing technology (eventually leading to the “Dahlgren Gun”) but also had a profound effect on the course of U.S. history, as the replacement of Upshur as Secretary of State by South Carolina politician John C. Calhoun, a vociferous advocate of slavery, helped set the U.S. on a path to the Civil War.

Demologos was a paddlewheel catamaran designed to be a floating, self-propelled battery to defend New York Harbor during the War of 1812. The hulls were five feet thick, and the paddlewheel was between the two hulls, where it was protected from enemy fire; the steam engine was protected below the waterline. Demologos was completed after Fulton’s death, when it was re-named Fulton, and made successful trial runs in 1815.

As soon as the War of 1812 ended, however, the Navy decided not to put her into service. She was being used as a receiving ship at the time of the explosion. In many respects the ship was both ahead of its time and a technological dead end. Nevertheless, aspects of her design (double-hull protected steam powered paddlewheel) were incorporated in Union ironclad river gunboats during the Civil War. Her first commander was Captain David Porter and her only operational service was to take President James Monroe on a tour of New York Harbor.

Principal source is Naval History and Heritage Command document, “Casualties: US Navy and Marine Corps Personnel Killed and Injured in Selected Accidents and Other Incident Not Directly the Result of Enemy Action,” and NHHC Dictionary of American Navy Fighting Ships (DANFS) entries.