H-Gram 049: The Naval Battle of Okinawa—Victory 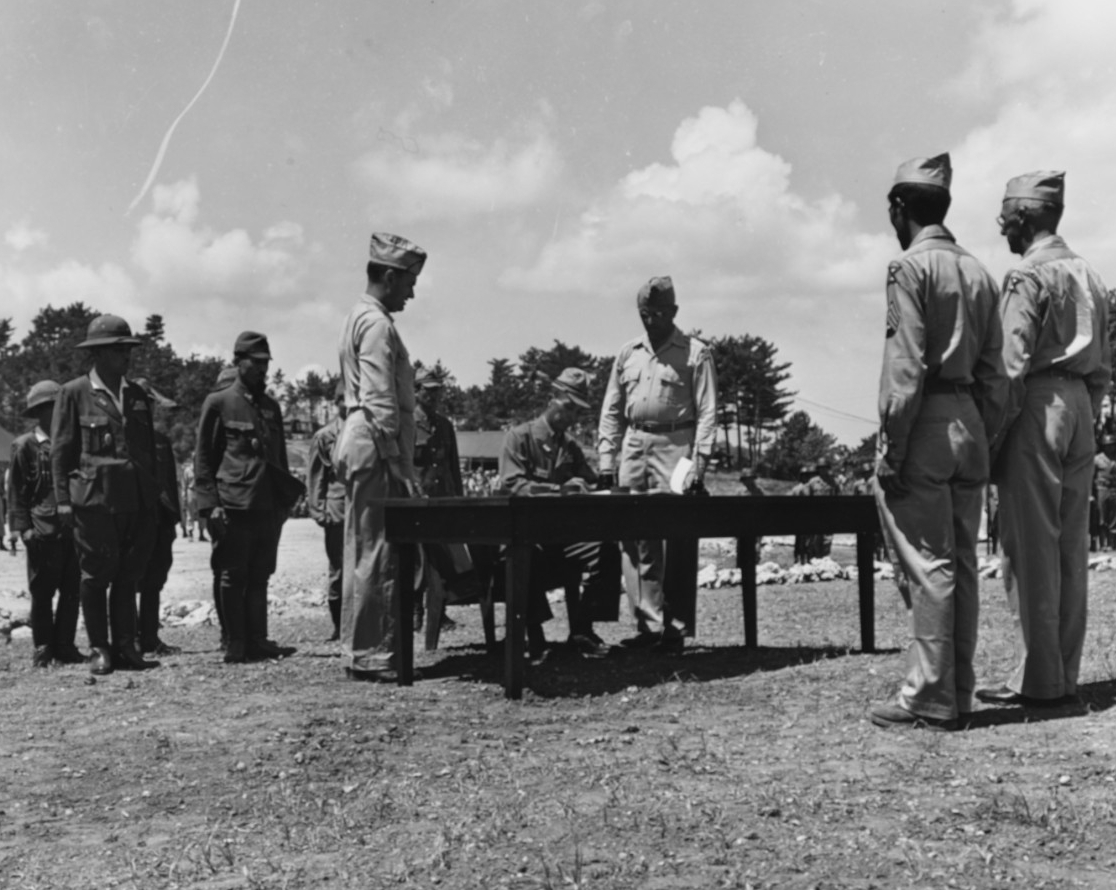 This H-gram covers the Naval Battle of Okinawa from early June 1945, including the last two mass kamikaze attacks, Kikusui No. 9 and 10, through the end of the battle in late June. It also covers the Medal for Honor awards to Lieutenant Richard McCool, skipper of LCS(L)-122, and Lieutenant Commander George Street, skipper of submarine Tirante (SS-420).

The protracted and bloody Battle of Okinawa reached its final phase at the end of May 1945, as U.S. Marines captured the strategic point of Shuri Castle. However, the Japanese executed one more unexpected, well-ordered retreat to yet one more prepared line of defense at the southern end of Okinawa. The remainder of Japanese navy personnel on the island (from the naval base at Naha) retreated to the Oroku Peninsula, which the Marines cut off and then assaulted from the sea. U.S. Army units went head-to-head with the Japanese army, which now had no more room to retreat except into the sea. The Japanese navy units put up determined resistance, resulting in over 2,600 Marines dead and wounded, but in the end almost all the Japanese personnel were killed or committed suicide, including Rear Admiral Minoru Ota, commander of the Japanese naval forces on Okinawa. The weather turned foul, turning the battlefield into muck and mire for the last three weeks of some of the most vicious fighting in the entire campaign.

With the passage of Typhoon Viper (see H-gram 048), Japanese kamikaze attacks on U.S. and British naval forces resumed with mass kamikaze attack Kikusui No. 9, consisting of only 50 kamikaze aircraft, as suitable planes and pilots became increasingly hard to come by (although part of this was because the Japanese were husbanding and hiding large numbers of aircraft for the anticipated U.S. invasion of Japan).  Kikusui No. 9 was strung out from 3–7 June 1945 and accomplished relatively little.

On 6 June 1945, the destroyer minelayers J. William Ditter (DM-31) and Harry F. Bauer (DM-26) came under concerted kamikaze attack but shot down several kamikazes before J. William Ditter was badly damaged and Harry F. Bauer took a near miss, or so they thought. Harry F. Bauer was one of the lucky ships of the Okinawa campaign, having shot down 13 Japanese aircraft and being hit by a torpedo that didn’t explode. As the damage on Harry F. Bauer was subsequently surveyed, it was discovered that she had been steaming for 17 days with an unexploded (but live, “three threads” from detonating) 550-pound bomb in one of her fuel tanks that had been released at the last second by the plane that almost hit her. The bomb was successfully de-armed. Harry F. Bauer was awarded a Presidential Unit Citation for her numerous actions during the Okinawa campaign.

The destroyer William D. Porter (DD-579) was not so lucky. She had already acquired notoriety for having accidentally fired a live torpedo at the battleship Iowa (BB-61), aboard which was President Franklin Delano Roosevelt, CNO Fleet Admiral Ernest J. King, and most of the Joint Chiefs on their way to Allied conferences in Cairo and Tehran in 1943. Fortunately, Iowa had sufficient warning to avoid the torpedo. Subsequently, the story was told that when William D. Porter went into port or met other ships, she would be greeted with the signal “Don’t shoot. We’re Republicans.”  She also became the subject of other stories of dubious veracity. However, on 10 June 1945, she shot down a kamikaze that crashed close aboard. Unfortunately, the plane’s bomb detonated directly under the ship, which killed no one but inflicted mortal damage.

One of the vessels that assisted the stricken destroyer was LCS(L)-122, which was hit and badly damaged on the following day by a kamikaze. Her skipper, Lieutenant Richard McCool, was awarded the Medal of Honor for his actions in saving his ship and is the namesake for the latest San Antonio–class amphibious transport, dock (LPD-29).

Even less lucky than William D. Porter was the destroyer Twiggs (DD-591) on 16 June, hit first by a torpedo and then by the plane that dropped it. Her forward magazine blew first and then her after magazine, and she went down with heavy loss of life (152 crewmen, including the commanding officer, Commander George Philip, who was awarded a posthumous Navy Cross). She was the last destroyer to be sunk before Japanese resistance on Okinawa ended.

On 18 June, the commander of U.S. forces ashore on Okinawa, U.S. Army Lieutenant General Simon Bolivar Buckner, was killed by Japanese artillery—only three days before the end of organized Japanese resistance. Although it was obvious that Okinawa was lost, the Japanese launched one last massed kamikaze attack, Kikusui No. 10, consisting of only 45 kamikaze aircraft, on 21–22 June 1945. These attacks sank LSM-59 and Barry (APD-29), a fast transport previously badly damaged by kamikazes, stripped of anything valuable, decommissioned, and intended for use as a kamikaze decoy. A kamikaze also seriously damaged the Pearl Harbor–veteran seaplane tender Curtiss (AV-4) in the Kerama Retto anchorage. (Of note, famous actor Henry Fonda served aboard Curtiss as a combat intelligence officer, giving up the equivalent of a multimillion-dollar Hollywood income.)

On 22 June, LST-534 was hit by a kamikaze while she was beached. Technically, she sank, but she didn’t go very far and would be raised, making LSM-59 the last commissioned ship sunk before the end of Japanese resistance on Okinawa.

In the meantime, Japanese frustrations with that country’s Kaiten submarines continued in late June. I-36 survived multiple close calls, and a sacrificial launch of two Kaiten-manned suicide torpedoes probably saved her, but she achieved no hits on her mission. I-165 was even less lucky and was sunk with all hands on 27 June 1945 by a U.S. Navy PV-2 Harpoon aircraft.

By 22 June 1945, the commander of Japanese forces on Okinawa, Lieutenant General Mitsuru Ushijima, had committed suicide, and the enormously costly battle of Okinawa was officially over. Kamikaze attacks went into a lull until late July as both sides prepared for the invasion of Japan.

For more detail on the last three weeks of the Naval Battle of Okinawa, please see attachment H-049-1.

On 14 April 1945, Lieutenant Commander George Street, on the first war patrol of Tirante (and his first war patrol in command of a submarine) boldly took Tirante into a harbor on the Korean Island of Jeju-do for a night surface attack on a small convoy (one transport and three escorts) at anchor. Street achieved surprise and sank the transport Juzan Maru. Illuminated by the explosions and fire of the transport, Tirante was pursued by the three Japanese escorts as she attempted to escape. Tirante then torpedoed and sank the escort ship Nomi, which blew up in a catastrophic explosion with heavy loss of life, and then torpedoed and sank escort ship CD-31. After reaching deep water, Tirante then survived a depth charge attack from the remaining escort. Street was awarded a Medal of Honor, and his Executive Officer, Lieutenant Edward L. “Ned” Beach, received a Navy Cross. Tirante was awarded a Presidential Unit Citation. 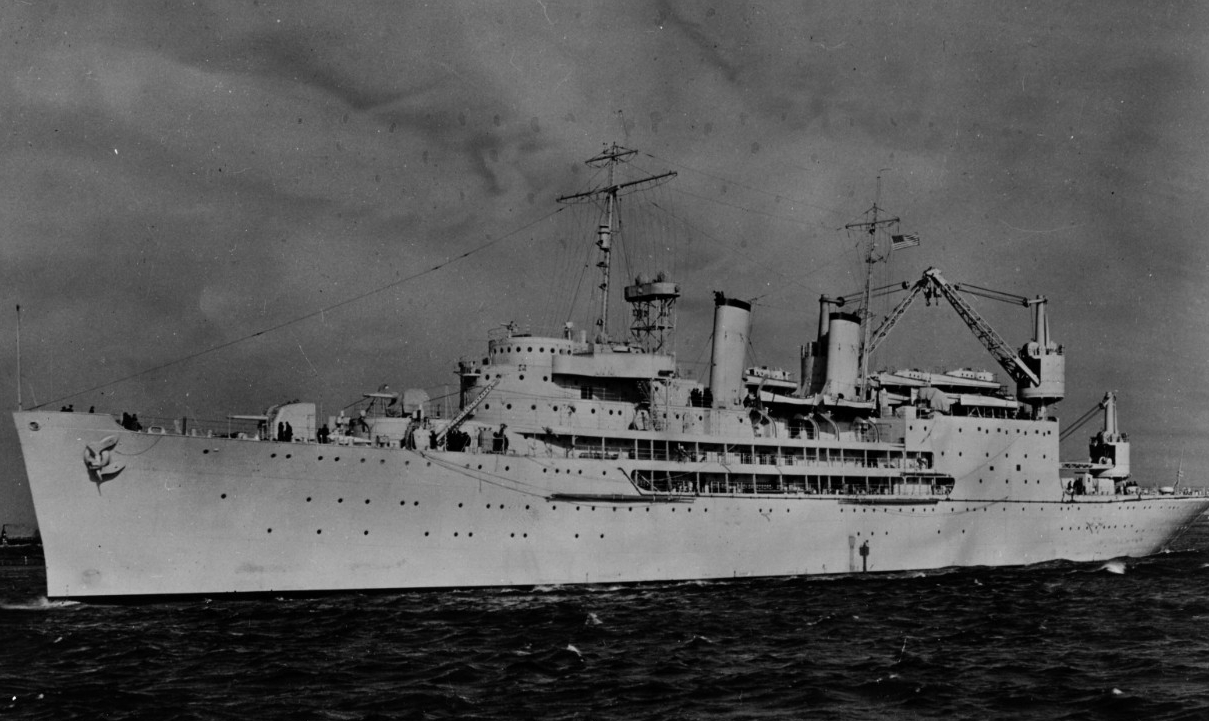