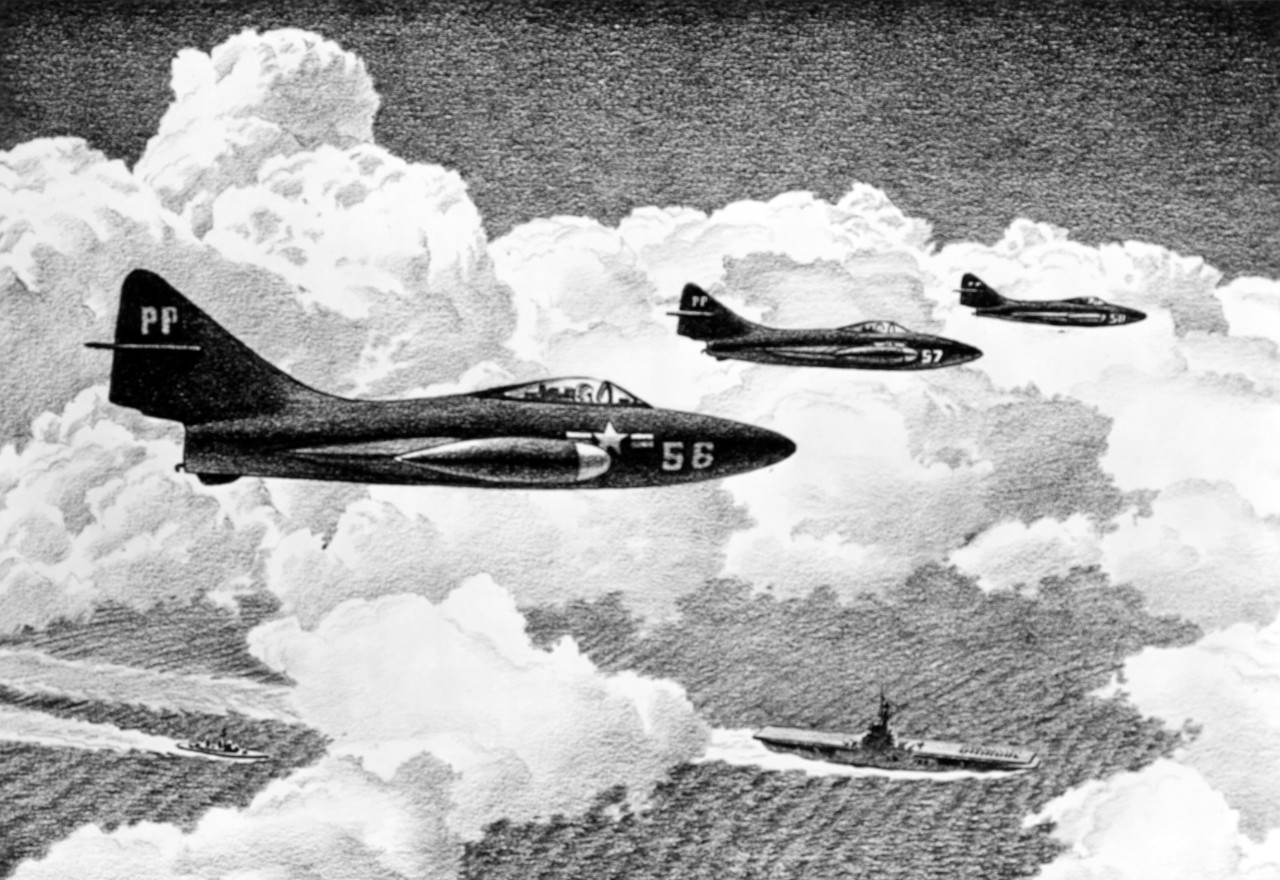 I am way behind on updating the events of the Korean War (and 50th anniversary of the Vietnam War) and more will follow. However, the 70th anniversary of the overwater dogfight between U.S. Navy carrier jet fighters and Soviet air defense force jet fighters over the Sea of Japan on 18 November 1952 is particularly noteworthy. In this action, then-Lieutenant E. Royce Williams engaged in one of the most incredible and unique feats of aerial combat in the entire Cold War and in U.S. Navy history. This action was the only overwater dogfight of the Korean War, and the only dogfight between jets of any U.S. service and Soviet jets flying from bases in the Soviet Union during the Cold War. Flying a F9F-5 Panther straight-wing jet fighter, Williams was outnumbered six to one for most of the engagement by faster, more maneuverable Soviet MiG-15 swept-wing jet fighters (it was two against seven at the very start). There is good reason to believe that Williams was responsible for the loss of at least three and probably four of the Soviet fighters. Williams then brought his badly damaged jet back to an amazing recovery on his carrier. Key details of this engagement remained classified for many years, and there was no conclusive confirmation of the full extent of the Soviet losses until after the fall of the Soviet Union. As a result, Williams was only awarded a Silver Star, although there are ongoing efforts even today to have it upgraded to a Medal of Honor. For more on this engagement, please see attachment H-075-1.

I originally prepared the attached paper at the request of Admiral Samuel Paparo (commander of U.S. Pacific Fleet), but I believe it may have wider applicability. In our quest for ever-better safety, it may be useful to understand just how inherently dangerous service in the Navy has been going all the way back to the Revolution—as well as just how extraordinarily good, by historic standards, our record has been since about 1990. Prior to that, accidents on the scale of John S. McCain (DDG-56) and Fitzgerald (DDG-62)—or worse—occurred almost on an annual basis, sometimes even more frequently. This would include 27 Navy ships lost with all hands due to non-combat causes, many of those lost without a trace. It includes at least 23 submarines lost due to accident, most with their entire crews. It includes numerous ordnance accidents, including seven major turret explosions, multiple ammunition ship immolations, and a burst gun that killed the Secretary of State and Secretary of the Navy. In the early days of the 20th century, the Navy averaged about 250 sailors per year killed in shipboard accidents and by disease, and as the number of disease deaths decreased, deaths as a result of aviation, submarine, and on-duty vehicle accidents increased. It wasn't until the 1960s that the frequency of these kinds of deaths began to decrease. It was worse in wartime. In World War I, 431 Navy personnel were killed in combat and over 4,000 in accidents (plus over 5,000 dead of the Spanish Influenza—we did much better during the recent pandemic). In World War II, the service lost 36,950 killed in action and 19,781 to accidents, including 8,184 killed in aviation accidents.

The attached paper contains a reverse chronology of major accidents (or weather-related losses) going back to 1900—it gets pretty mind-numbing in the 1960s and earlier.

My points are the following. One, we should never forget the sacrifices of so many sailors who gave their lives, even in peacetime, to learn lessons the hard way that make the fleet far more safe today. Two, while we should never cease striving to do better, I believe the Navy has cause to extoll our safety record of the last 30 years. Three, if we ever let up on the emphasis on safety, things could be a whole lot worse (and have been, in the past). For more on this, please see attachment H-075-2.

As always, you are welcome and encouraged to disseminate H-grams widely. Previous H-grams can be found here.