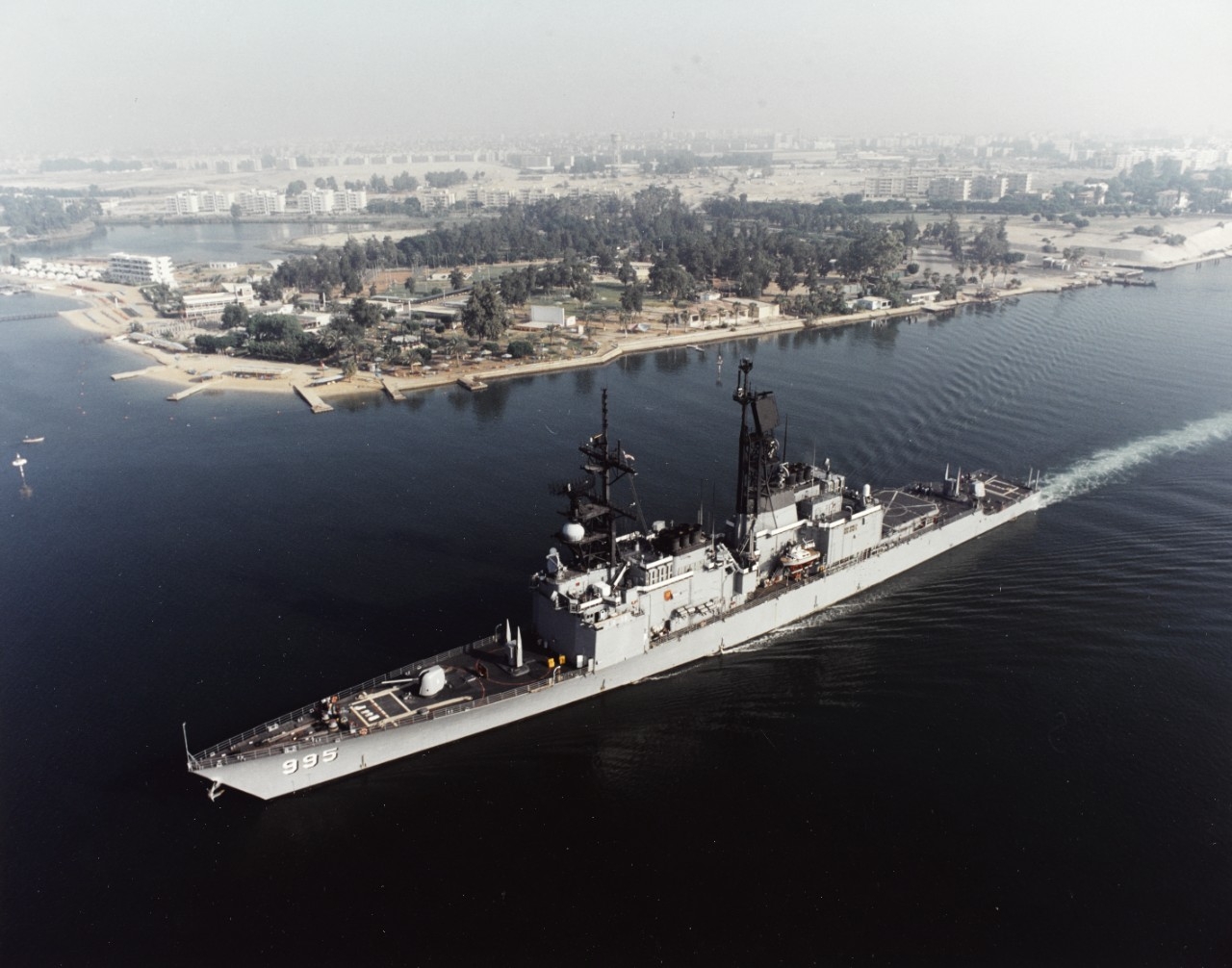 This series is a departure from my normal H-grams in that it is a personal recollection. I was a lieutenant commander intelligence officer and the Iraq subject matter expert on the intelligence staff of Commander, U.S. Naval Forces Central Command, for the entirety of Operation Desert Shield and Operation Desert Storm, serving under Vice Admiral Hank Mauz and Vice Admiral Stan Arthur. I first wrote this account a number of years after the fact, but I kept it true to what I believed and understood to be true at the time, so my dim view of Joint Operations as conducted during Desert Storm (which held the Navy back from making its maximum contribution to the war) and U.S. Central Command, particularly the intelligence support architecture, will be readily apparent. My penance for this heresy would be to spend 12 of the next 21 years in joint commands, including three years as commander of the U.S. Central Command Joint Intelligence Center, where I had the opportunity to see vast improvement in U.S. joint operations.

We showed the somewhat blurry FIST (Fleet Imagery Support Terminal) image to Vice Admiral Mauz, Commander of the U.S. Seventh Fleet, in his office aboard Blue Ridge (LCC-19) as part of the normal briefing process for the off-going intelligence watch. The image showed hundreds of Iraqi Republican Guard tanks, armored personnel carriers, and other vehicles located just north of the Kuwaiti border in the telltale “coil” formation that the Republican Guard had used prior to commencing offensive operations during the Iran-Iraq War. The admiral asked the obvious question, “So are they going to invade?”

We’d been watching the intelligence traffic reporting on increased tensions and rhetoric between Iraq and Kuwait and the buildup of Iraqi forces on the border for the previous week or so. The prevailing consensus was that Saddam Hussein would have to be nuts to invade Kuwait, especially after the debacle of his last invasion attempt, into Iran in 1981, which resulted in an incredibly bloody, eight-year war. I hedged my answer a bit only because of my belief that no one on the planet really knew what was going on inside Saddam’s head except Saddam himself, and even he might not be sure.

I responded, “Sir, if it's a bluff, it's an extremely good one. They have everything in place to launch an attack. All they need is a ‘go’ order from Saddam himself.”

The admiral heard this with considerable interest but no undue concern. Kuwait and the Arabian Gulf (Persian Gulf to most people) were not in the Seventh Fleet area of responsibility. This would be a problem for the commander of the Navy’s Middle East Force. Or so we all thought.

The view from the Cubi Point Officer’s Club was spectacular, but the sense of foreboding in the air was palpable.

As I marveled at the vista that included the entirety of Subic Bay, from the sunset over Grande Island to Subic City, Olongopo, and the U.S. naval base, I could not help but sense that I was looking at the end of an era—an end, perhaps, to the last vestige of America’s colonial past. The U.S.­–Philippines base negotiations had failed, and after more than 90 years in Subic Bay, the U.S. Navy was being evicted and would be out in a little over a year. But the changes were even more sweeping than that.

The whole world was changing, suddenly and dramatically. The Warsaw Pact was falling apart with stunning rapidity as people took to the streets in such numbers that their communist overlords simply quit. Extraordinary change was occurring in the Soviet Union as well. Only two weeks earlier, I had been deeply engaged in the planning for the imminent visit by Blue Ridge, the Seventh Fleet Flagship, to Vladivostok, Russia, headquarters of the Soviet Pacific Fleet. It was a place I knew very well but only through satellite photography and other intelligence collection. The port visit would mark the first call by a U.S. warship in a Soviet Pacific port since before World War II.

It seemed as if peace was actually breaking out, but the visit was suddenly canceled because Saddam Hussein had just invaded Kuwait. Our new orders were to steam to the Arabian Gulf at best speed to take command of the rapidly growing U.S. naval force responding to this incredibly blatant act of aggression. So much for world peace.

We had been given four days’ notice before we departed on a deployment that was to last almost 10 months. My new bride, a naval officer, too, had been stationed in Japan for almost five months by the time I arrived. I had been with Mara there for all of three weeks before shipping out to a war zone. So much for the honeymoon.

We left our homeport of Yokosuka, Japan, with dozens of Japanese shipyard workers still on board rushing to complete critical maintenance work. We then pulled into Subic to swap the Japanese for Filipino workers, who were to complete the work and be flown off when we steamed past Singapore.

During our single night in Subic, we held a traditional Hail and Farewell at the Cubi Club amid the extraordinary collection of squadron memorabilia from the Vietnam War, which decorated every square foot of the bar area. I was not sure whether I envied or pitied the departing officers. On the one hand, we were steaming toward history in the making, and I wanted to be a part of it. One the other hand, we were venturing into the great unknown that is war.

I knew better than anyone on the staff what the Iraqi capabilities were. At their peak, during the Iran-Iraq war, Iraqi Mirage F-1 fighter-bombers had flown the entire length of the Arabian Gulf—at night, at low-altitude, and with multiple air-to-air “buddy” refuelings—and had successfully struck Iranian tankers in the Strait of Hormuz with laser-guided missiles. This was not your typical Arab air force. The big unanswered question was how much their skills had atrophied since the end of hostilities with Iran.

During my earlier tour as an intelligence briefer for the Chief of Naval Operations, I had made a point of studying the ongoing Iran-Iraq War and frequently prepared briefs on my own initiative on Iraqi anti-ship strike activity during the “Tanker War,” as well as on the Iraqi use of chemical weapons against the Iranians and Iraq’s own Kurdish population. I was once accused of being obsessed. “Why do you keep briefing all this Iran-Iraq war crap?” asked a senior officer, since everyone else was obsessed with Soviet submarines at the time, and our national policy was merely to “tilt” toward the Iraqis because the Iranians were viewed as worse.

I answered, “Because when this [the Iran-Iraq] war is over, the Iraqis will be on the other side. We will be enemies.” That was 1986. Now, in 1990, it had come to pass, and we would be among the earliest units to go into the thick of it.

At the Bay of Bengal, Blue Ridge was dead in the water in the dark, all power and propulsion lost, hundreds of miles from land and as many miles from the nearest American ship. Worse, we had hit heavy seas upon departing Subic Bay, and the Filipino shipyard workers on board had puked en masse in the passageway outside my stateroom, enough that it sloshed around as the ship heaved and rolled. Days later, the fragrance lingered, as the blue tiles the workers had been laying were now firmly affixed with a unique blend of glue and barf. But worse yet, the outbreak of war in the Arabian Gulf had resulted in an explosion of message traffic that jammed our own communications.

Critical intelligence messages I had been counting on to prepare for going to war were stuck in a backlog so bad that there was no hope of retrieval. Since the Arabian Gulf was not in the Seventh Fleet’s area of operations, we had virtually no intelligence files on Iraq on board. Most of what I was using to prepare for briefings was coming from memories of Iraqi military operations before the end of the Iran-Iraq War, but there was a glaring gap in my understanding of current Iraqi capability, since intelligence collection had dropped off dramatically when the Iran-Iraq war ended. Most everyone had lost interest. I was starved for new information, and my frustration was mounting.

The only good thing about this particular day was that our intelligence specialist chief (ISC Gilbert) had invited me to dine in the chiefs’ mess. By Navy tradition, such invitations are a rarity, an honor, and an indication of one having earned a chief’s highest respect. Having been a member of the staff for only a little more than a month, I was deeply flattered.

The chief asked that I give a presentation on the Iraqi situation to the entire chiefs’ mess after dinner. They were apparently as starved for the scoop on what we were getting into as I was.

Two days later, and after the ship had regained power, I gave my talk to the chiefs’ mess. I had wrestled with what to discuss, since some of the chiefs had no security clearance, and only a few had a full top-secret. I reasoned that we were heading to war, and the chiefs would set the tone for how seriously the ship’s crew should prepare for battle. For all I knew, this chief’s mess could very well suffer the same fate as the chief’s mess on USS Stark in 1987, destroyed by an accidental strike by two Iraqi Exocet missiles that cost the lives of 37 Sailors, so I told it to them straight. I did not make the Iraqis 10 feet tall, but I did speak about the Exocet-equipped Mirage F-1 fighter bombers, the mine threat, the Silkworm coastal defense missiles, the Osa missile boats, and the Iraqi use of chemical weapons. I told them the details of the Stark attack, too. I told them we were not sure whether the Iraqis would continue the attack into Saudi Arabia, but there was little to stop them if they did, and Bahrain might not even be in friendly hands by the time we got there.

I finished by telling them that I did not know if the United States would actually go to war to kick the Iraqis out of Kuwait, but the likelihood that we would soon be in combat was the highest at any time since Vietnam. I said, in my view, that we would go to war, that we had to be ready, and that they, the chiefs, were the key to making sure the ship was ready in the little time remaining.

The 50 or so chiefs responded with a loud, sustained standing ovation like nothing I experienced before or since. I was stunned and wondered what my grandfather and father would have thought if they could see this, for they had taught me that the chiefs were the soul of the Navy. I barely maintained my composure. 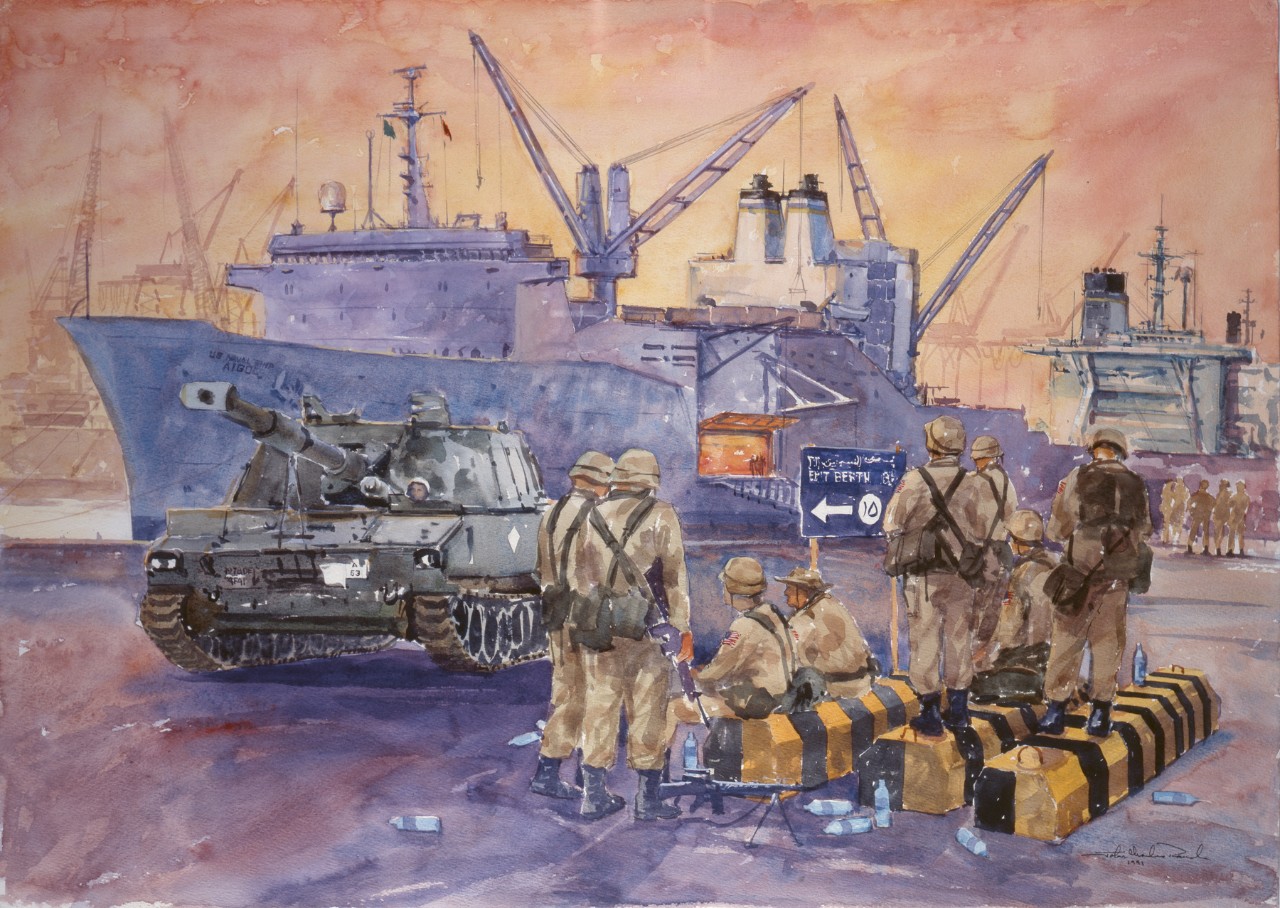 Back to H-Gram 052 Overview