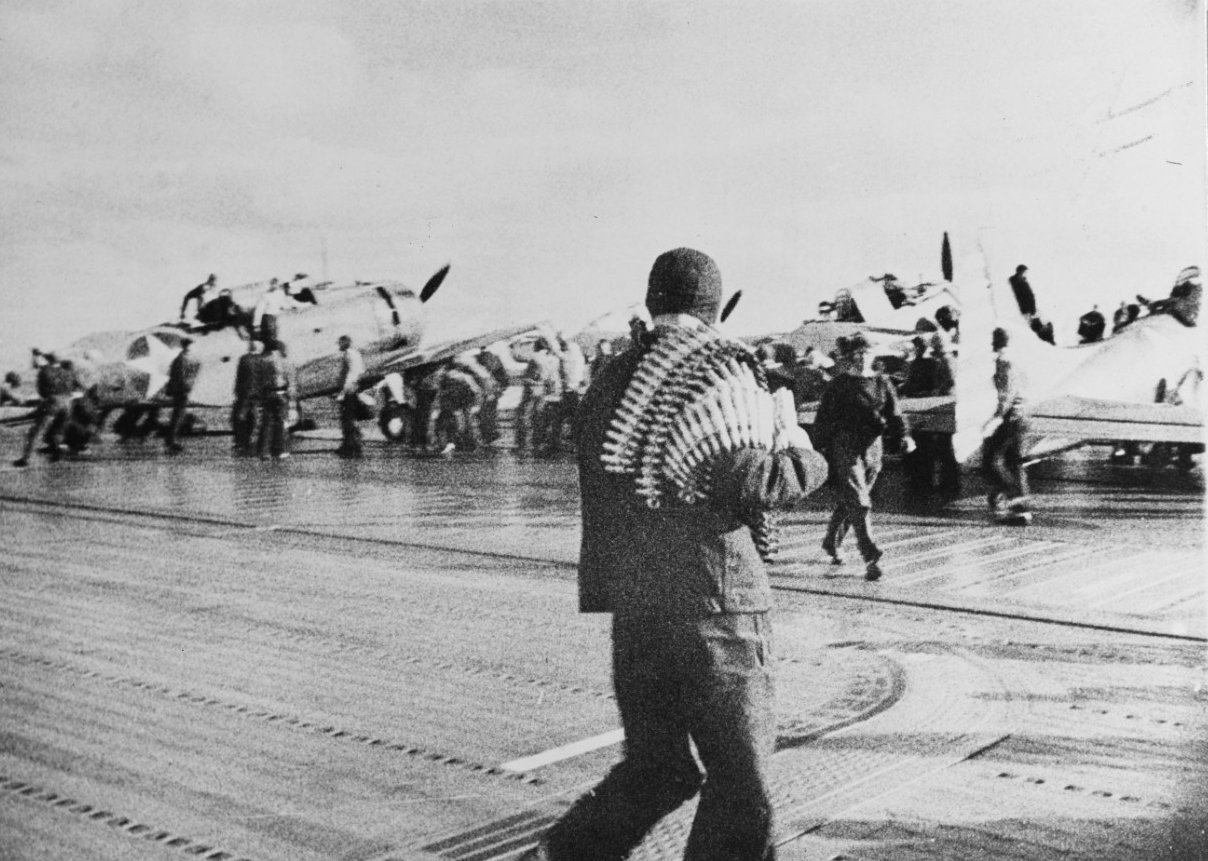 USS Enterprise (CV-6): Flight deck scene, 1 February 1942, during the raids against the Japanese-held Marshall Islands. Note belts of .50 caliber ammunition being carried around by the crewman in the foreground. The aircraft in the background are part of the carrier's air group Douglas SBD-3 Dauntlesses (NH 50941).

Bruno Peter Gaido was born in Staunton, Illinois, in 1916 to parents who had immigrated from Italy via Germany to the United States in 1914. He graduated from high school in Milwaukee, Wisconsin, in 1934. He worked as a filterer in a brewery until his father finally relented and gave him permission to join the Navy. Gaido enlisted at Naval Station Great Lakes on 11 October 1940. Upon graduation from boot camp, he was assigned to Naval Air Station Pearl Harbor on Ford Island. Gaido was temporarily assigned to Scouting Squadron 6 (VS-6) to learn to be an aviation machinist. After several more temporary duty stints with the squadron, he was assigned permanently.

Gaido quickly earned a reputation in VS-6 for his mental and physical toughness. When newly reported pilot Lieutenant (j.g.) Norman Jack “Dusty” Kleiss got into his SBD Dauntless dive bomber to make his first carrier landing, he expected to fly solo with a pile of sand-bags in the gunner’s seat, standard procedure for a carrier qualification flight. Instead, Kleiss found Gaido in the seat, who identified himself as Kleiss’ radioman-gunner. Kleiss tried to talk Gaido into getting out the aircraft for his own safety, but Gaido persisted, responding, “You got wings, don’t ya?” Buoyed by Gaido’s confidence, Kleiss made six perfect landings with Gaido as a passenger. (Kleiss would go on to be the only dive-bomber pilot to score a direct hit on three different Japanese ships at the Battle of Midway—carriers Kaga and Hiryu, and heavy cruiser Mikuma, all of which were sunk. Kleiss was subsequently awarded a Navy Cross.)

On Sunday morning, 1 February 1942, in the first offensive action by U.S. aircraft carriers in the Pacific war, planes from USS Enterprise (CV-6) and Yorktown (CV-5) caught the Japanese by surprise in the Marshall Islands. Enterprise aircraft bombed targets in the northern Marshalls: Kwajalein, Wotje, and Maloelap (Tararoa). Yorktown aircraft bombed targets in the southern Marshalls: Jaluit, Mili, and Makin. Despite extensive damage, a Japanese counter-attack force of five G3M Type 96 twin-engine bombers (later designated “Nell”) led by Lieutenant Kazuo Nakai was able to locate Enterprise. Aided by cloud cover, and the repeated gun jams of U.S fighters, all five bombers made it through the combat air patrol. Instead of a standard horizontal bombing run, Nakai led his bombers in a glide-bombing profile, pulling out at 1,500 feet over the carrier. Extraordinary ship handling by Captain George Murray caused the bombs to miss, the closest impacting 30 yards to port.

Throughout the engagement, shipboard antiaircraft fire consistently missed behind the Japanese aircraft. However, Nakai’s plane had been damaged by Wildcat fighters before commencing its run. As the other four bombers made good their escape, Nakai’s plane turned around and commenced a dive on Enterprise, approaching from astern where the carrier’s antiaircraft defenses were weakest. There was no doubt that Nakai intended to crash his plane into Enterprise. 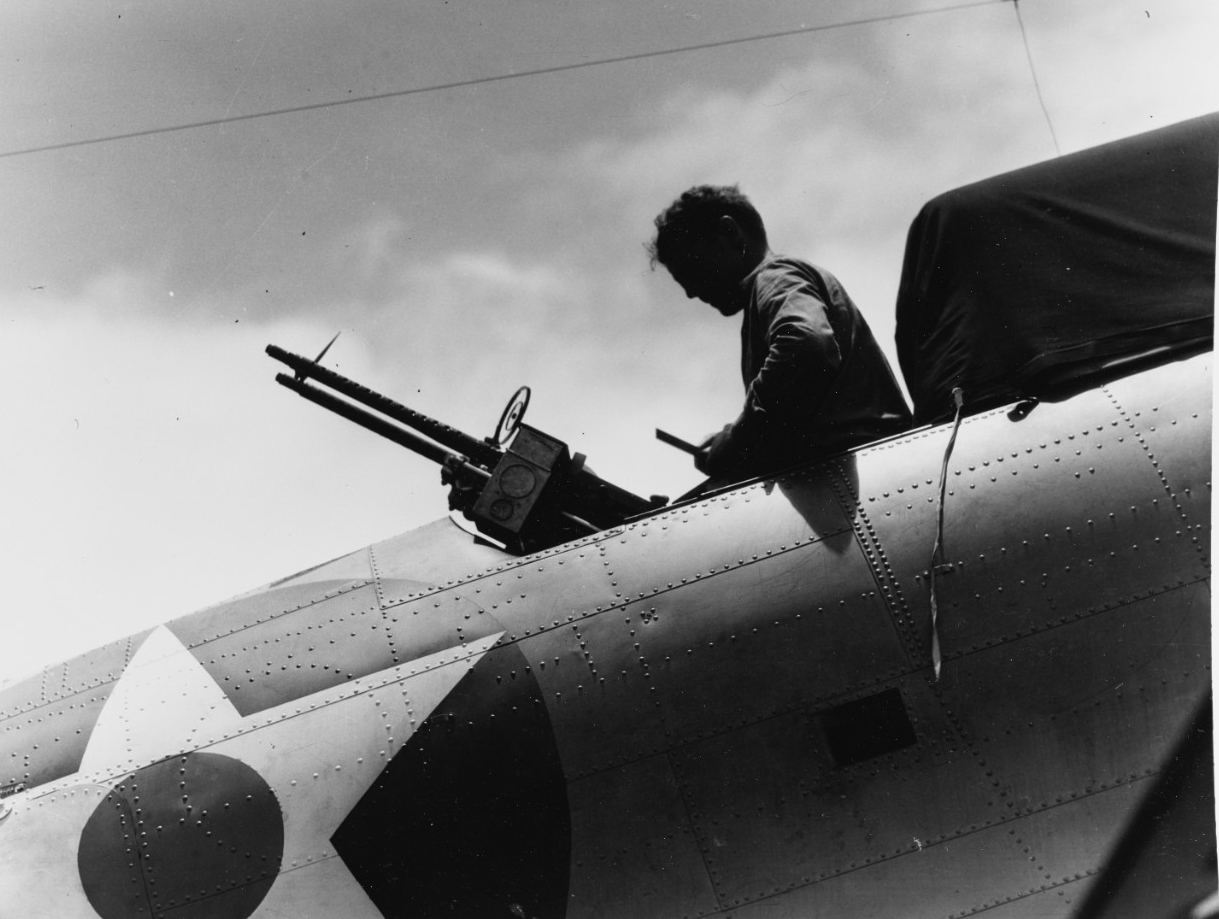 A crewman readies the rear cockpit twin .30-caliber machine-gun mount on a Douglas SBD-3 Dauntless onboard USS Enterprise (CV-6). Although this image was captured on 24 February 1942 prior to the launching of air strikes against Wake Island—more than three weeks after Bruno Gaido's exploit—it illustrates his "office" as an SBD radio-gunner well (80-G-66279)

As the Japanese bomber continued to close on Enterprise without taking any apparent damaging hits, AMM3c Bruno Gaido leaped out of his battle station in the catwalk. He climbed into the back seat of parked SBD Dauntless dive bomber “6-S-5” (his normal position as radioman-gunner when the plane was airborne), and swiveled the plane’s aft twin .30-caliber machine guns and opened fire on the rapidly approaching bomber. He stood up, aiming his machine guns down into the low-flying plane, pouring accurate fire into the cockpit, finally causing the plane to lose control. The bomber barely missed the flight deck, its wingtip cutting off the tail of the SBD Gaido was in and spinning the parked aircraft. Gaido continued firing on the bomber throughout, until it crashed in the water on the opposite side of the ship.

Gaido then calmly grabbed the fire bottle from the SBD and extinguished a pool of flaming gasoline on the flight deck left over from the crashed bomber. Thereafter, he disappeared into the ship, worried he would get in trouble for leaving his battle station. Vice Admiral William F. Halsey, the task group commander, ordered that the unidentified gunner be found. A search party eventually located Gaido and brought him to the bridge, whereupon Halsey spot-promoted him to petty officer first class, as everyone who observed the event credited Gaido with keeping Enterprise from being hit in the extremely close call.

Besides the double-promotion from Halsey, Gaido was awarded a Secretary of the Navy Letter of Commendation for “extraordinary courage and disregard for his own safety” in helping shoot down a Japanese plane “after it had been set afire and attempted to crash on the flight deck of an aircraft carrier.” (Of note, at this time neither the Navy Commendation Medal nor Bronze Star Medal existed, and the Silver Star was an Army-only award. Also at that time, the Navy Cross was third in order of precedence behind the Medal of Honor and Distinguished Service Medal.) 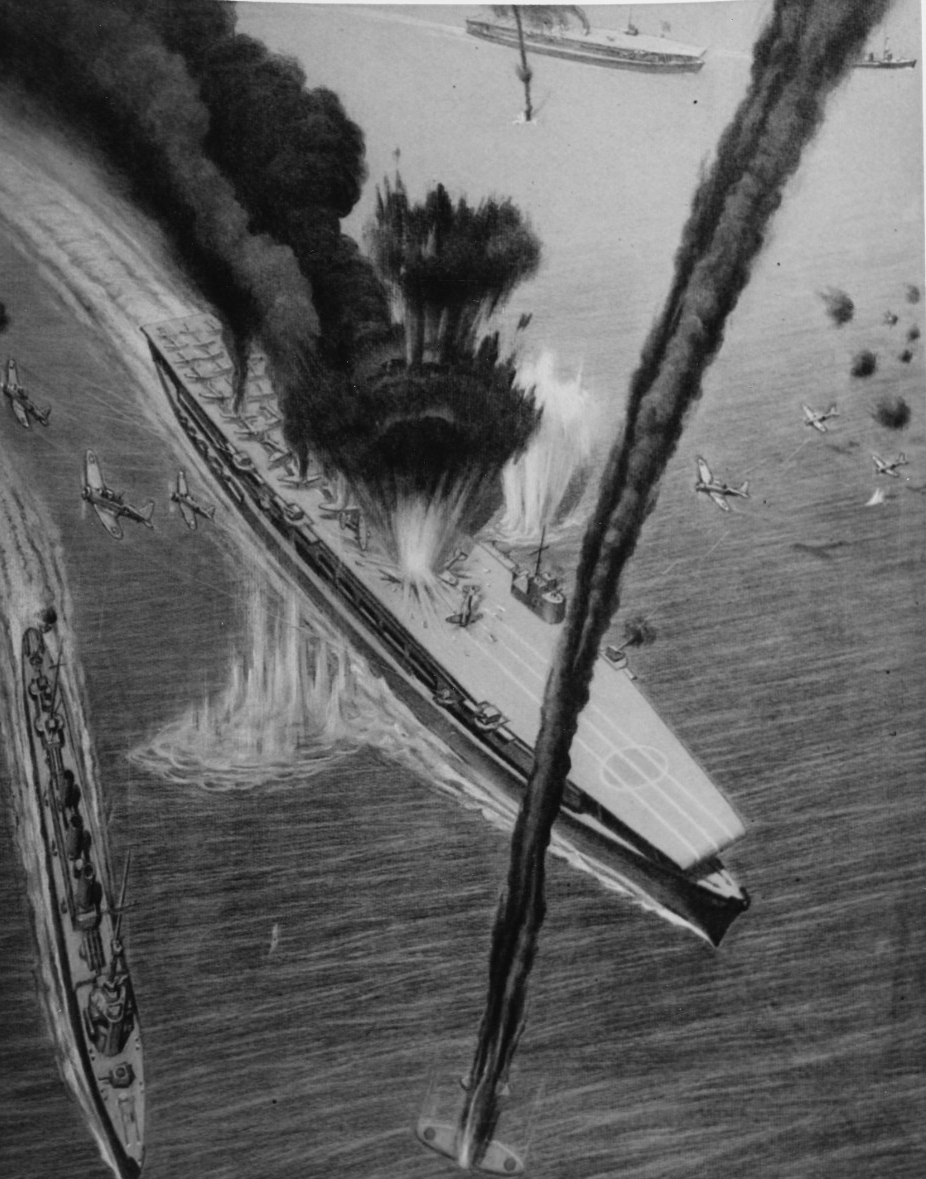 Battle of Midway: Charcoal and chalk drawing by C. B. Coalg of the 4 June 1942 battle showing the Japanese aircraft carriers Kaga and Akagi under air attack (K-24233).

At the subsequent Battle of Midway on 4 June 1942, Gaido was gunner in a SBD piloted by Ensign Frank Woodrow O’Flaherty, one of 28 planes that dive-bombed the Japanese carrier Kaga (Flaherty’s bomb just missed, possibly because smoke and flames from four previous hits, one from Dusty Kleiss, obscured the target).

While returning to Enterprise in a group of six stragglers led by Lieutenant Charles Ware, the flight was jumped by six Japanese Zero fighters that broke away from Japanese carrier Hiryu’s dive-bomber counter-strike that was heading toward carrier Yorktown. Ware had earlier improvised a tactic of turning into the attacking Zeros, and did so again, creating an arc with the trailing SBDs that enabled all rear-seat gunners to concentrate their fire on the lead Zeros. Two Zeros were so badly shot up they had to break away to Hiryu—one ditched en route and the other barely made it to the carrier. Although it is impossible to tell which SBD gunners did the damage, given Gaido’s previous history of accuracy, it is possible he did his fair share.

The remaining four chastened Zeros broke off, but were unable to catch up with Hiryu’s dive bombers before they were intercepted by F4F Wildcat fighters from Yorktown. These had shot down most of the undefended Japanese dive bombers (the seven bombers that got through scored three direct hits and two damaging near-misses on Yorktown, so every Japanese plane lost was critical to Yorktown’s survival at that point in the battle).

Unfortunately, Gaido’s plane had been holed in the wing during that or an earlier encounter with Zeros and was losing fuel. O’Flaherty had to ditch in the open sea. Of the other five SBDs, one was able to ditch near Yorktown for rescue, but the other four, including Ware’s, missed the carriers and disappeared without a trace into the Pacific.

O’Flaherty and Gaido were picked up by Japanese destroyer Makigumo, interrogated, and possibly tortured. The Japanese claimed to have gotten useful information from them about the defenses of Midway Island, but the two provided nothing of value regarding the U.S. carriers. However, as neither had been to Midway, neither had any way of knowing what was on the island (even the skipper of USS Hornet’s torpedo-bomber squadron did not know that a detachment of his own squadron, which had been left behind in Norfolk to transition to the new TBF Avenger torpedo bomber, had arrived on the island).

My assessment is that O’Flaherty and Gaido, possibly under torture, gave up plausible but phony information. Certainly everyone who knew Gaido adamantly believed (after the war) he would not have cracked. However, by 15 June 1942, the Japanese decided the two aircrewmen were no longer of use and orders were received to dispose of them. According to Japanese accounts, the destroyer skipper asked for volunteers to execute the prisoners, but the crew initially refused. However, in the dead of night, weights were tied to both and they were thrown over the side to drown. Japanese accounts state that both met their end with stoic and dignified defiance. Neither O’Flaherty’s nor Gaido’s fate was known by the United States until after the war. None of the responsible Japanese officers survived the war, so there was no war crime prosecution.

The President of the United States takes pride in presenting (posthumously) the Distinguished Flying Cross to Aviation Machinist Mate First Class Bruno P. Gaido, U.S. Navy for extraordinary achievement while participating in aerial flight as Gunner in an airplane in a scouting squadron in action against enemy Japanese forces in the Battle of Midway, 4-6 June 1942. With heroic and meritorious devotion to duty, he rendered valuable assistance to his pilot by detailing continuous specific and comprehensive information concerning the disposition and movements of enemy Japanese units. His courage and cool determination in carrying out this vital task in the face of furious and repeated attacks were in keeping with the highest traditions of the United States Naval Service.

…For consistently outstanding performance and distinguished achievement during repeated action against enemy Japanese forces in the Pacific war area, 7 December 1942 to 15 November 1942. Participating in nearly every major engagement in the first year of the war, ENTERPRISE and her Air Group, exclusive of far flung destruction of hostile shore installations throughout the battle area, did sink or damage on her own a total of 35 Japanese vessels and shot down a total of 185 Japanese aircraft. Her aggressive spirit and superb combat efficiency are fitting tribute to the officers and men who so gallantly established her as an ahead bulwark in the defense of the American nation.

Gaido’s father received a Presidential commemoration (his mother died while he was missing in action):

In grateful memory of Bruno Peter Gaido, who died in the service of his country, SEA, Pacific Area, attached USS ENTERPRISE, 5 June 1943 (presumed). He stands in the unbroken line of patriots who have dared to die that freedom might live and grow and increase its blessings. Freedom lives, and through it, he lives – in a way that humbles the undertakings of most men.

No ship has been named after Bruno Gaido. However, John C. Butler–class destroyer escort DE-340 was named in honor of O’Flaherty. Commissioned in April 1944, USS O’flaherty earned four battle stars in World War II (Guam, Lingayen Gulf, Iwo Jima, and Okinawa) and was mothballed in 1947. Gearing-class destroyer DD-865 was named in honor of Lieutenant Charles R. Ware (also awarded a posthumous Navy Cross). The ship was commissioned at the very end of World War II and served until 1974.

Bruno Gaido’s actions on 1 February 1942 are depicted with reasonable accuracy in the 2019 movie Midway. However his demise did not occur on 4 June 1942 as depicted in the movie, and whether or not he told the Japanese destroyer skipper to “Go f*** yourself,” is unknown to history, but it makes for a good Hollywood scene.

My thanks to Laura Orr, NHHC Hampton Roads Naval Museum deputy education director, for much of the research on Gaido. Sources also include Never Call Me a Hero, by N. Jack “Dusty” Kleiss, with Timothy and Laura Orr, William Morrow, 2017.