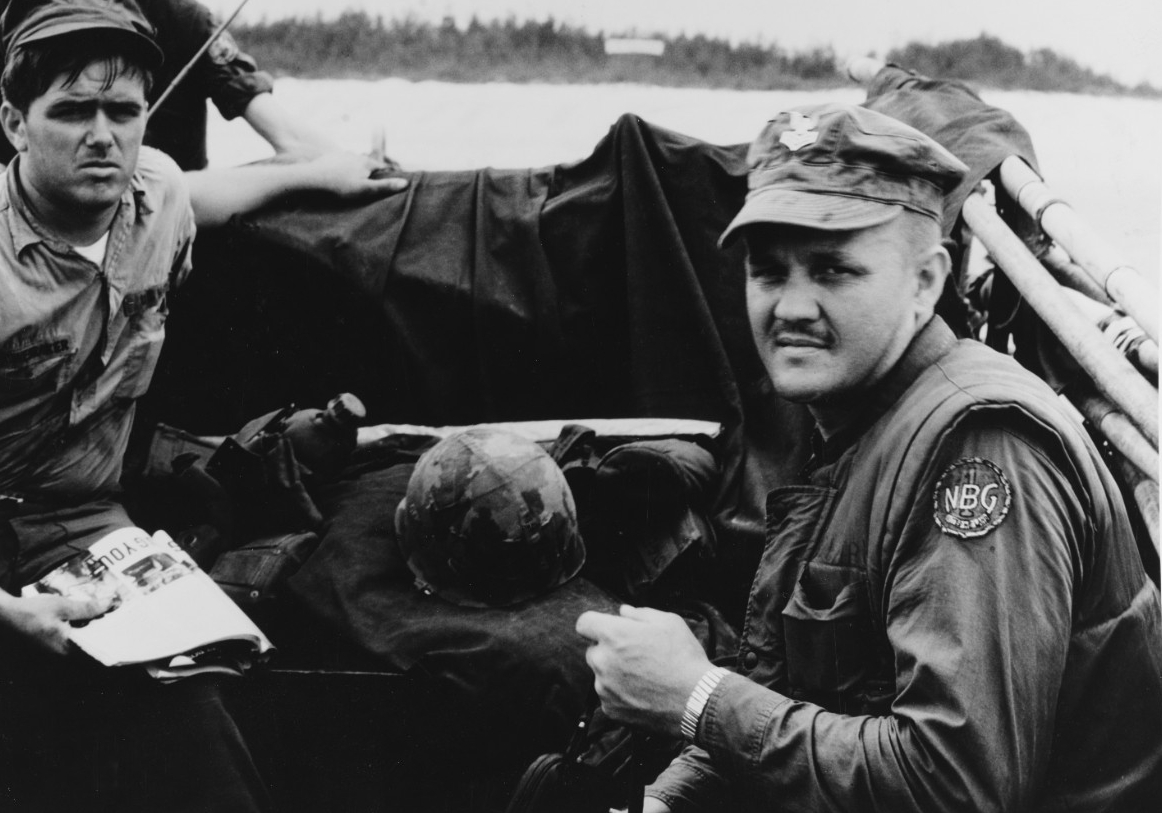 U.S. began to fill the void left in Indochina following the departure of French troops and advisors in April 1956. The United States now would lead the training and advising of the South Vietnamese land and sea forces. Only a small number of Sailors were assigned to the Military Assistance Advisory Group (MAAG) and they were barred from going on operational missions with their South Vietnamese counterparts until May 1959, when North Vietnam formally initiated a conflict to overthrow South Vietnamese President Diem.

Navy advisors were increasingly frustrated with poor quality of Vietnamese naval leadership and poorly trained sailors. The cultural and language barriers between the U.S. advisors and the South Vietnamese Navy proved difficult.

From 1961–63, the Vietnam Navy (VNN) grew from 3,200 to 6,000 men.  It had some interdiction success, but did not have the leadership, personnel, equipment, or logistics network to stop the North Vietnamese on the scale needed. The VNN could not effectively slow the movement of supplies from North Vietnam to the insurgent Viet Cong (VC) in South Vietnam, it was recommended that the U.S. Navy intervene directly.

The first Navy assistance with interdiction came in December 1961, when four U.S. minesweepers (MSOs) were stationed south of the 17th parallel. Their radar located ships and notified the VNN so that it could intervene. In February 1962, destroyer escorts replaced the MSOs at the 17th parallel and also in the Gulf of Thailand—the “Gulf of Siam Patrol.” Both operations were halted in spring/summer 1962 because there was little evidence of their need. North Vietnamese resupply efforts by sea skyrocketed in the years after the patrols ended.

In January/February 1964, the Military Assistance Command Vietnam (MACV) Special Operations Group initiated Operation 34A.  This was a highly classified infiltration, surveillance, and sabotage mission using U.S.-trained South Vietnamese commandos, CIA, and Navy assets in attempts to undermine the North Vietnamese government. Over 2–4 August 1964, the U.S. destroyers Maddox (DD-731) and Turner Joy (DD-951) were conducting 34A Operations when they were attacked by North Vietnamese torpedo boats in the Gulf of Tonkin, leading to the official U.S. entrance into the Vietnam War.

Following the Gulf of Tonkin incidents, the Navy presence on the ground in South Vietnam and in Vietnamese waters increased steadily. Retaliatory and offensive carrier strikes become routine after a brief operational lull in late 1964.

On 16 February 1965,  a North Vietnamese steel-hulled trawler filled with arms and ammunition was located at Vung Ro Bay in central Vietnam.  This was evidence that large-scale resupply operations by sea to secret ports in South Vietnam were taking place and that a counter-operation was needed.  It took the VNN four days to secure the area and seize the materials. MACV commander General William Westmoreland, along with Naval advisors from the U.S. Seventh Fleet, revamped the U.S. Navy–VNN interdiction program. Navy surface ships (minesweepers and destroyers) and shore based SP-2H Neptune patrol craft would be sent to the 17th parallel and eight other patrol areas along the coast to locate targets and direct the VNN to them. A Naval Advisory Group coordinated between Seventh Fleet and VNN.  In May 1965, U.S. rules of engagement were changed to allow U.S. ships to engage suspect vessels.

1966 and 1967 are filled with blue and brown water Navy interdiction efforts, close-shore gunfire support for land forces, and carrier strikes against targets in South and North Vietnam.  More detailed information can be found in the operational summaries and chronology below.

2–4 August 1964:  Gulf of Tonkin incidents—part of Operation 34A, the surveillance and infiltration of North Vietnam, which began that February.

TF-115, Operation Market Time—Initiated in March 1965 as TF-71, a large-scale U.S. Navy and Coast Guard coastal interdiction campaign off the coast of South Vietnam. Larger surface combatants acting as surveillance ships turned into a blockade of 5,000 personnel and 126 vessels and craft. Coastal interdiction was the largest and most successful aspect of the U.S. Navy’s war in Vietnam. It almost immediately hurt the North Vietnamese Communists’ ability to resupply their forces in the south with large boats. Market Time was so successful that by 1967 some of the assets were used for naval gunfire support, civic action, and patrolling of large rivers. The sea, land, and air radar–search capabilities of Market Time forces made it nearly impossible for large metal-hulled junks to slip through the U.S. net. However, a weakness of Market Time was the operation’s inability to stop small craft that could easily break the blockade. Another key problem was that North Vietnamese ships that stayed in international waters were off limits and could reach neutral Cambodian ports with impunity. The VNN was relegated as a junior partner in this operation.

TF-116, Operation Game Warden—Begun in May 1966 as a patrol of Long Tau River (shipping channel from Saigon to South China Sea), and then was expanded to cover the entire Mekong Delta. At its peak in 1968 it consisted of five divisions, each with 20 river patrol boats (PBRs). It searched water traffic for contraband, checked papers of travelers, and evolved into a mobile strike force that attacked Viet Cong positions and river crossings. The operation was not as successful at interdiction as it was as direct-action force disrupting enemy movements, providing gunfire support, and securing major rivers for commerce.

TF-117, Mobile Riverine Force—An amphibious riverine strike force operating with the U.S. Army to seek and destroy large VC formations.  By 1968, it encompassed over 1,600 Sailors organized into four squadrons, each of which consisted of two river assault divisions. (In late 1968, Operation Sealords combined the interdiction efforts of Market Time and Game Warden. Vice Admiral Elmo Zumwalt strongly pushed an effort to place the VNN in the forefront of these operations.)

Operation Sea Dragon—Underway from 25 October 1966 through October 1968. It was conceived to interdict sea lines of communications and supplies going from North to South Vietnam, destroy land targets with gunfire support, and destroy waterborne craft. TF-77 assets were heavily involved in this. Two U.S. ships were hit in 1967 by enemy fire (each with KIA): August, Dupont (DD-941); September, Mansfield (DD-728).

Naval air strikes were launched from carriers on Dixie (South China Sea) and Yankee (Gulf of Tonkin) stations (see details in chronology below).

1 July 1960: Sixty officers and men are assigned to the Navy section of MAAG. The section would expand to 500 personnel by 1968.

1 January: U.S. Navy establishes SEAL teams. SEALs arrived at Danang in July as advisors in a pilot program. They trained coastal force commandoes and did hydrographic surveys of the South Vietnamese coast. The first SEAL combat casualty occurred on 19 August 1966.

8 February:  MACV established, with a U.S. Navy contingent on its staff.

May:  President Kennedy orders the Hancock carrier group and Bennington (CV-20) submarine hunter-killer group to a position off Danang following tensions in Laos.

24 April:  At this point, 600 Naval officers and enlisted personnel were serving throughout South Vietnam.

1 May:  The Viet Cong mined USNS Card, manned by MSTS, alongside a pier at Saigon.

16 February:  A North Vietnamese steel-hulled trawler located at Vung Ro Bay in central Vietnam was found to be filled with arms and ammunition. This was evidence that large-scale resupply operations by sea to secret ports in South Vietnam were taking place and that a counter-operation was required.

20 May:  Oriskany (CV-34), the first carrier to operate from Dixie Station, arrived off South Vietnam.

20 June:  North Vietnamese MIG-17s attacked four piston-engine Navy Skyraiders from Midway. A Skyraider shot down one of the MIGs.

2 December:  Enterprise (CVAN-65) launched 118 air sorties, marking the first time a nuclear-powered ship engaged in combat. Throughout the year, two carriers operated from Dixie, three from Yankee Station. TF-77 launched over 65,000 sorties. Naval gunfire-support ships fired more than 86,000 rounds in support of ground forces. At this time, more than 8,000 Navy and Coast Guardsmen were in-country; 24,000 Navy personnel were aboard ships operating off the coast.

15 May: NSA Saigon was established to support Market Time and Game Warden.

1 September: River Assault Flotilla One was commissioned and would become the naval component of the Mobile Riverine Force (TF-117).

31 October: In a three-hour engagement, 65 Viet Cong rivercraft were sunk by Game Warden PBRs led by BM1 James Williams; he was subsequently awarded the Medal of Honor.

31 December: At this time, over 23,500 Navy and Coastguardsmen are in-country and 36,000 Navy personnel manned the 55 Seventh Fleet ships off the Vietnamese coast.

29 April:  Ponchatoula (AO-148) completed an eight-month deployment in which it set a record of 464 UNREPs.

May:  Bon Homme Richard (CVA-31) aircraft penetrated the defenses of Hanoi and knock out an electrical power plant.

18 May:  In the Operation Beau Charger amphibious landing, 11 Sea Dragon ships joined other vessels ships near the demilitarized zone (DMZ) nominally dividing North and South Vietnam. The gunfire support provided was the greatest concentration of naval gunfire since the Korean War. Although successful, the realization of the need for naval gunfire to reach further inland launched the first steps toward re-commissioning New Jersey (BB-62). DoD officially announced plans to re-commission her on 1 August.

August:  Oriskany aircraft shut down the Hanoi thermal power plant. Naval aviators also dropped the center span of the Lan Son rail and highway bridge, 8 miles from the Chinese border, and attacked the naval base at Van Hoa.

15 August:  Admiral James Russell (Ret.) convened the first meeting of the Aircraft Safety Review Panel to examine the actual and potential sources of fire and explosions on carriers.

29 August:  Dupont  had one Sailor killed and 40 wounded when a North Vietnamese shell struck the ship.

4 September:  Navy carrier aircraft began the systematic destruction of all bridges leading out of Haiphong. The bulk of the weapons used in air operations were Navy-developed: Zuni, Bullpup, Sidewinder, Stardard ARM, and Walleye.

4 September:  Lieutenant Vincent Capodanno, CC, USN, was killed tending Marines in I Corps. He was the first chaplain to be awarded the Medal of Honor in Vietnam.

4 September:  The first traffic crossed Liberty Bridge south of Danang. The bridge, the longest in Vietnam, was constructed by Seabees of Mobile Construction Battalion Four.

25 September:  One Sailor killed by North Vietnamese fire onboard Mansfield near the DMZ.

26 October:  Lieutenant Commander John McCain, flying an A-4 Skyhawk off Oriskany, was shot down over Hanoi.

31 December:  To date, Market Time and Game Warden units detected 1,700,000 craft and inspected 1,200,000 of them throughout the year. There were 32,000 Navy and Coastguardsmen in-country and 36,000 personnel manning Seventh Fleet ships off the Vietnamese coast. A total of 77,000 combat and support sorties were flown.

Back to H-Gram 009 Overview