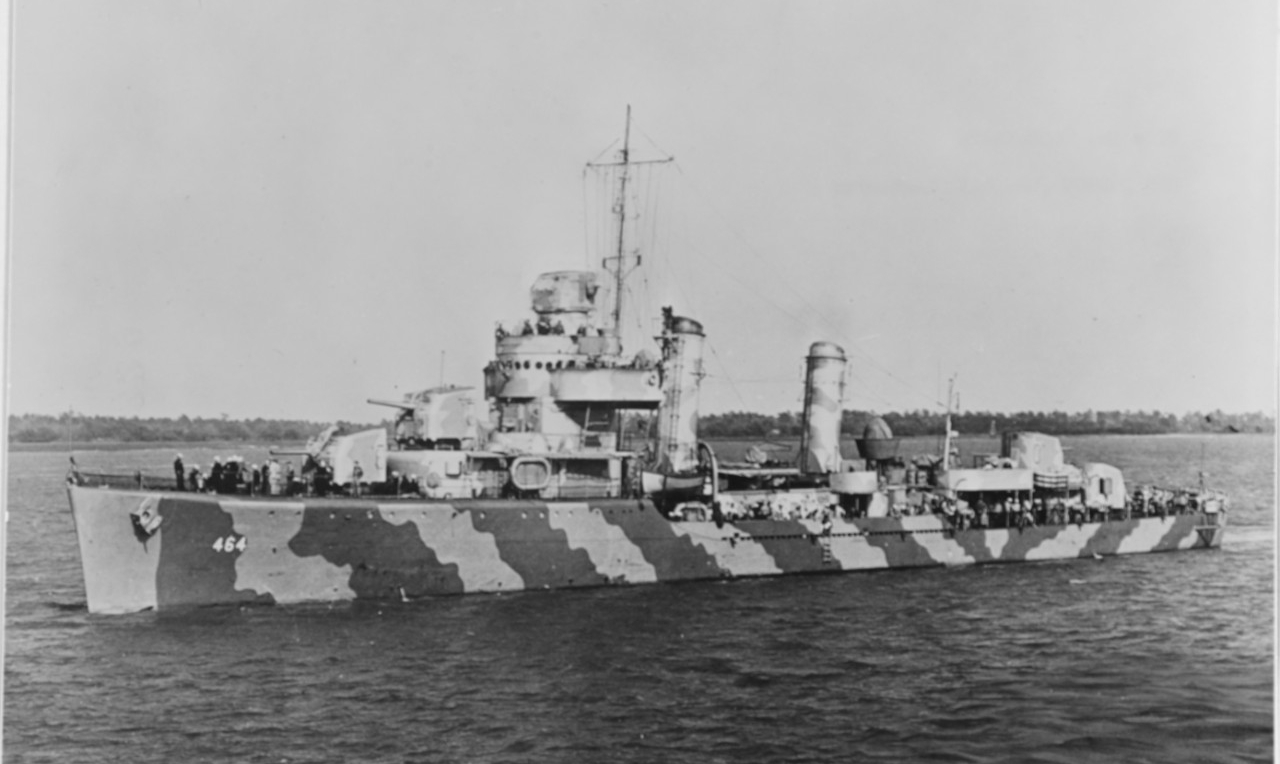 USS Hobson (DD-464) off Charleston, South Carolina, 4 March 1942. She is painted in camouflage Measure 12 (Modified). This photograph was censored to remove radar antennas atop her foremast and Mark 37 gun director (NH 53548).

This H-gram covers the loss of destroyer-minesweeper USS Hobson (DD-464/DMS-26) and 176 of her crew in a collision with carrier USS Wasp (CV-18) on 26 April 1952, the largest loss of U.S. Navy life since World War II. For the 80th anniversary of World War II, this H-gram also reprises previous H-grams on the Doolittle Raid and the Battle of the Coral Sea, with an addition covering the extraordinary and largely forgotten valor of the fleet oiler USS Neosho (AO-23).

70th Anniversary of the Loss of USS Hobson

The destroyer-minesweeper USS Hobson survived battle with a Vichy French submarine and a German U-boat, dueled German heavy shore batteries at Utah Beach, Cherbourg, and off southern France, attempted to rescue a troopship in mined waters in a violent gale, and recovered from a direct hit by a bomb from a disintegrated kamikaze at Okinawa. Hobson did not survive “a grave error in judgment” on the part of her commanding officer on the night of 26 April 1952 in the North Atlantic.

After making an “inexplicable” left turn ahead of carrier USS Wasp, Hobson was rammed, sliced in two, and sunk in less than four minutes by the carrier, with the loss of 176 crewmen including her commanding officer (61 survived). This remains the worst loss of life in the U.S. Navy since World War II, and the worst single-ship non-combat loss since collier USS Cyclops (Fuel Ship No. 4) and 306 personnel aboard disappeared without a trace in 1918.

The court of inquiry concluded “that the sole cause of the collision was the unexplained left turn made by Hobson about 2224. In making this left turn, the Commanding Officer committed a grave error in judgment.” No one else was considered at fault and Wasp was absolved.

On 14 May 1952, an editorial appeared in the Wall Street Journal entitled “Hobson’s Choice,” which to this day is one of the best depictions of the U.S. Navy principle of accountability:

On the sea there is a tradition older even than the traditions of the country itself and wiser in its age than this new custom. It is the tradition that with responsibility goes authority and with them both goes accountability. This accountability is not for the intentions but for the deed…. It is cruel this accountability of good and well-intentioned men. But the choice is that or an end to responsibility and finally, as the cruel sea has taught, an end to the confidence and trust in the men who lead, for men will not long trust leaders who feel themselves beyond accountability for what they do. And when men lose confidence and trust in those who lead, order disintegrates into chaos and purposeful ships into floating derelicts. 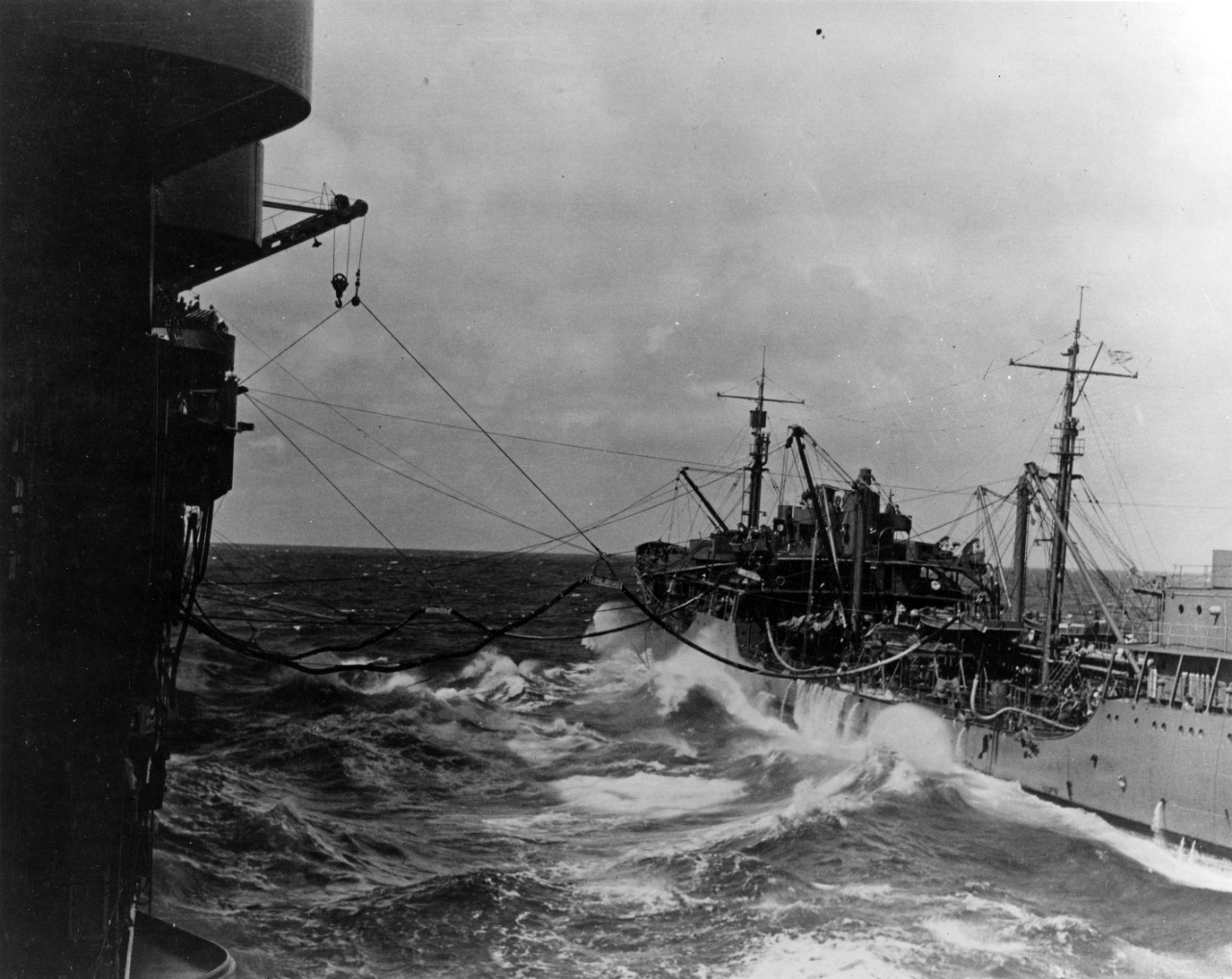 Since I wrote extensively about World War II for the conflict’s 75th anniversary, I will mostly just reference my previous work.

On 18 April 1942, 16 U.S. Army Air Force B-25 twin-engine bombers launched from aircraft carrier USS Hornet (CV-8) to conduct the first bombing of Japan since the attack on Pearl Harbor. For more on the raid, please see H-Gram 004.

On 7–8 May 1942, the Battle of the Coral Sea was the first naval battle in history in which opposing ships never sighted each other. It was also the first carrier versus carrier battle. The result was a tactical draw, but a strategic victory for the United States in that the Japanese were forced to call off their planned capture of Port Moresby, New Guinea. The cost was the U.S. carrier Lexington (CV-2), destroyer Sims (DD-409), and fleet oiler Neosho (AO-23) in exchange for Japanese light carrier Shoho and severe damage to carrier Shokaku (which would have profound consequences). For more on the Battle of the Coral Sea please see H-Gram 005.

However, I am bringing forward the story of Lieutenant John Powers as an example of how one person’s valor changed the course of the war. I have also added a new section with more detail on Neosho and Sims as examples of extraordinary valor under the worst conditions.

The Bomb That Changed the Course of the War

On 8 May 1942, 24 SBD Dauntless dive-bombers from USS Yorktown (CV-5) commenced an attack on Japanese fleet carrier IJN Shokaku in the Coral Sea. As each bomber nosed over in near-vertical dives from 18,000 feet on the wildly maneuvering Shokaku, their windscreens and bombsights fogged over so badly during the descent that the U.S. pilots were blinded and forced to release their bombs “by memory.” Although one bomb hit the Shokaku near the bow and started a serious fire, other bombs missed. Finally, an SBD piloted by Lieutenant John Powers (USNA ’35), his wing on fire after being hit by cannon fire from a Japanese Zero fighter, pressed his dive well below the standard minimum pull-up altitude.

Powers’ bomb hit Shokaku nearly dead center and caused horrific and nearly fatal damage, starting massive fires and killing over 100 Japanese sailors. Unable to pull up in time, Powers flew through the frag pattern of his own bomb and crashed alongside the carrier.

Although 15 dive bombers off Lexington would later manage to hit Shokaku with one more bomb, it was Powers’ bomb that knocked the carrier out of action for the rest of the battle, leaving her unable to recover aircraft, and with damage so severe that she was unable to participate in the critical and decisive Battle of Midway one month later. Her presence could have easily turned that battle into a catastrophic defeat for the United States. By the sacrifice of his life and that of his radioman-gunner (Radioman Second Class Everett Clyde Hill), Powers quite likely prevented the loss of Yorktown during the Battle of the Coral Sea and changed the outcome of two of the most important battles of World War II. For his valor, Powers was awarded the Medal of Honor, posthumously. Hill’s parents received his $10,000 G.I. life insurance policy payout.

Forgotten Valor: The Sacrifices of USS Neosho and USS Sims

Of 40 Japanese torpedo bombers that attacked Pearl Harbor on 7 December 1941, not one thought that the tanker Neosho was worth expending a torpedo on. Neosho was actually a national strategic asset: she was much bigger and faster than other oilers, and she was equipped with the new capability to conduct underway alongside refueling at sea. Sitting at the gasoline pier among the battleships on the east side of Ford Island, Neosho was also literally a giant bomb waiting to go off, with devastating consequences had she been hit by a torpedo or bomb. Despite torpedoes, bombs, and strafing all around, the skipper of Neosho, Commander John S. Phillips got his 513-foot ship underway without the aid of tugs and moved her across the harbor during the attack to a comparatively safe location, shooting down a Japanese plane along the way, a feat of coolness and courage under fire that resulted in a Navy Cross.

Five months later, at the Battle of the Coral Sea, Neosho’s charmed streak ended. Based on an erroneous sighting report, the two Japanese carriers launched a 78-plane strike at what they thought was a U.S. aircraft carrier, only to find Neosho and her lone escort, destroyer USS Sims in what the U.S. thought to be a safer area. Discovering their error, the Japanese sent the torpedo bombers back to the carrier, but at least 24 Val dive bombers rolled in on Neosho and Sims. The ships put up a valiant fight, downing three aircraft and damaging at least four more, although in an amazing feat of airmanship one Japanese pilot crashed his crippled aircraft onto Neosho.

Sims was hit by four bombs in quick succession and buckled amidships. She went down quickly, with her guns blazing, and her skipper and crew still trying to save her, but underwater explosions killed almost all of them. Twenty survivors on a raft were never seen again, but 15 in a whaleboat made it to Neosho (two later died).

The maneuverability of twin-screw Neosho and her heavy volume of anti-aircraft fire caused the first two waves of dive bombers all to miss. The third wave changed tactics and attacked from multiple directions simultaneously; the result was seven direct hits, crippling the ship, leaving her dead in the water, on fire, and listing heavily. Some of the crew panicked, while many others misinterpreted the order to make preparations to abandon ship as an order to do so. Almost two thirds of the crew, and all the rafts and two of the boats, went over the side despite Captain Phillip’s attempts to order them back.

The situation was precarious, but Neosho stubbornly remained afloat, although riding ever lower in the water. At the end of the first day, 158 of Neosho’s crew were unaccounted for, most of them probably on seven overcrowded rafts. Only two of the men on the rafts would ultimately survive a nightmarish nine days adrift. In addition, Neosho’s last radio message contained an error by the ship’s navigator, which threw the searchers off.

By the third day, Phillips determined that the ship could not remain afloat much longer, so he ordered the four remaining boats and a number of makeshift rafts prepared with provisions and jury-rigged sails, with the intent to set sail for Australia the next day. Neosho was finally sighted by a U.S. PBY flying boat on 11 May as the boats were being manned. The PBY directed destroyer Henley (DD-391) to the scene to rescue 123 survivors, several of whom subsequently died from their wounds. Even then, it took two torpedoes and 146 rounds of 5-inch gunfire to finally put Neosho under.

The toll was high. Of Sims’ crew of 252, only 13 ultimately survived. Of Neosho’s crew of 287, only 102 survived (all five passengers survived as well). Navy historian Rear Admiral Samuel Eliot Morison would later assess that Neosho and Sims did not go down in vain. Had the Japanese 78-plane strike (with all their torpedo bombers still intact) struck Yorktown and Lexington during the period they were most vulnerable, the Battle of the Coral Sea could have ended as a devastating defeat for the United States.

For more on this extraordinary story of courage amid tragedy, please see attachment H-071-3.

All previous H-grams may be found here.