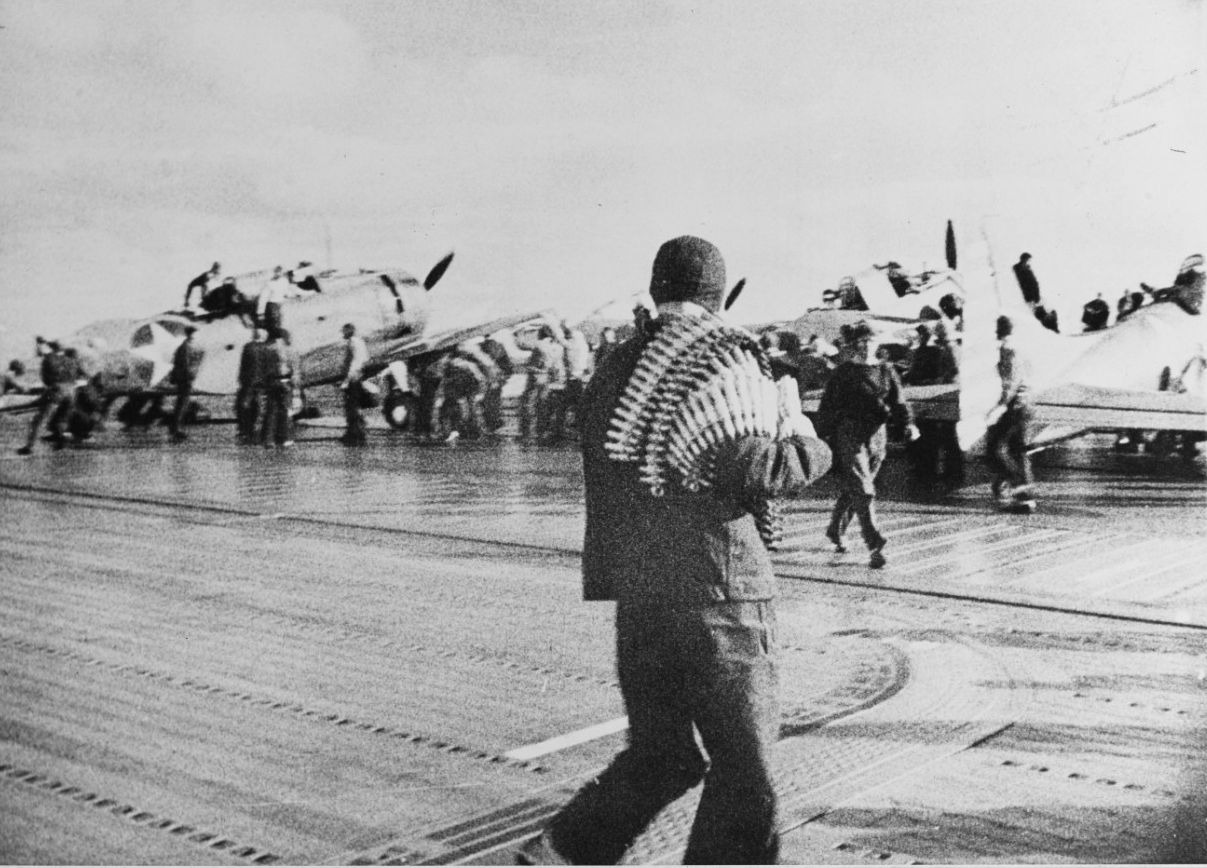 Scene on the Enterprise’s flight deck, 1 February. Note belts of .50-caliber ammunition being carried by the crewman in the foreground. The aircraft in the background are Douglass SBD-3 Dauntless scout/dive bombers (NH 50941).

On 1 February  1942, five Japanese twin-engine bombers made it through the USS Enterprise (CV-6) combat air patrol (fighters) defenses following the U.S. carrier raid on the Japanese-held Marshall Islands.  All the bombers missed and turned away, except the badly damaged lead plane, piloted by Lieutenant Kazuo Nakai, which turned back in an attempt to crash on the Enterprise.  As the aircraft neared the ship and anti-aircraft fire seemed ineffective, Aviation Machinist Mate Third Class (AMM3/C) Bruno Gaido leaped out of the catwalk, climbed into the back seat of a parked SBD Dauntless dive bomber (his normal position as radioman-gunner when the plane was airborne), and swiveled the plane’s aft twin .30 caliber machine guns and opened fire, standing while pouring accurate fire down into the low-flying bomber’s cockpit, causing it to lose control. The bomber barely missed the flight deck, its wingtip cutting the tail off the SBD Gaido was in and spinning the parked aircraft. Gaido continued firing on the bomber throughout, until it crashed in the water on the opposite side of the ship. Gaido then calmly grabbed the fire bottle from the SBD and extinguished a pool of flaming gasoline on the flight deck left over from the crashed bomber.  Thereafter, he disappeared into the ship, worried that he would get in trouble for leaving his watch station. Vice Admiral William F. Halsey, the task group commander, ordered that the unidentified gunner be found. A search party eventually located Gaido and brought him to the bridge, whereupon Halsey spot-promoted him to First Class, as everyone who observed the event credited Gaido with keeping the Enterprise from being hit in the extremely close call.

Gaido already had a reputation on Enterprise for his mental and physical toughness.  In June 1941, newly reported pilot Lieutenant Junior Grade Dusty Kleiss got into his SBD to make his first carrier landing, expecting to fly solo, only to find Gaido, who identified himself as Kleiss’s radioman-gunner,  sitting in the gunner’s seat instead of the usual pile of sandbags for initial carrier qualification flights. Kleiss tried to talk Gaido into getting out of the aircraft for his own safety, but Gaido persisted, responding, “You got wings, don’t ya?” Buoyed by Gaido’s confidence, Kleiss made several perfect landings with Gaido as a passenger.

At the subsequent battle of Midway on 4 June 1942, Gaido was a gunner in an SBD piloted by Ensign Frank O’Flaherty, one of 28 planes that dive-bombed the Japanese carrier IJN Kaga (the bomb just missed, possibly because smoke and flames from four previous hits obscured the target). While returning to the Enterprise in a group of a six stragglers led by Lieutenant Charles Ware, the flight was jumped by six Japanese “Zero” fighters that broke away from Japanese carrier IJN Hiryu’s dive-bomber counterstrike that was heading toward the carrier USS Yorktown (CV-5). Ware had earlier improvised a tactic of turning into the attacking Japanese Zeros, and did so again, creating an arc with the trailing SBD’s that enabled all rear seat gunners to concentrate their fire on the leading Zeros. Two Zeros were so badly shot up they had to return to Hiryu; one ditched en route and the other barely made it to the carrier. Although it is impossible to tell which SBD gunners did the damage, given Gaido’s previous history of accuracy, it is possible he did his fair share. The remaining four chastened Zeros broke off, but were unable to catch up with Hiryu’s dive bombers before they were intercepted by F-4F Wildcat fighters from the Yorktown, which shot down most of the undefended dive bombers (the seven bombers that got through scored three severe direct hits and two damaging near-misses on Yorktown, so every Japanese plane lost was critical to Yorktown’s survival at that point in the battle.)

Unfortunately, Gaido’s plane had been holed in the wing during that or an earlier encounter with the Zeros, and was losing fuel. O’Flaherty had to ditch in the open sea. Of the other five SBD’s, one was able to ditch near the Yorktown for rescue, but the other four, including Ware’s, missed the U.S. carriers and disappeared without a trace into the Pacific. O’Flaherty and Gaido were picked up by the Japanese destroyer IJN Makigumo, interrogated and probably tortured. The Japanese claimed to have gotten useful information from them about the defenses of Midway Island, but the two provided nothing of value regarding the U.S. carriers. However, neither had been to Midway Island so neither had any way of knowing what was on the island (even the skipper of USS Hornet’s torpedo bomber squadron did not know that a detachment from his own squadron, which had been left behind in Norfolk to transition to the new TBF Avenger, had arrived on the island). My assessment is that O’Flaherty and Gaido, under torture, gave up plausible but phony information. Certainly everyone who knew Gaido adamantly believed that he would not have cracked. However, on 15 June 1942, the Japanese decided the two aircrewmen were no longer of use. Weights were tied to both and they were thrown over the side to drown. Japanese accounts state that both met their end with stoic and dignified defiance. Gaido’s fate was not known by the U.S. until after the war. None of the responsible Japanese officers survived the war, so there was no war crime prosecution. Gaido was subsequently posthumously awarded the Distinguished Flying Cross.

(My thanks to Laura Orr, NHHC Hampton Roads Naval Museum, Deputy Education Director, for much of the research on Gaido.)