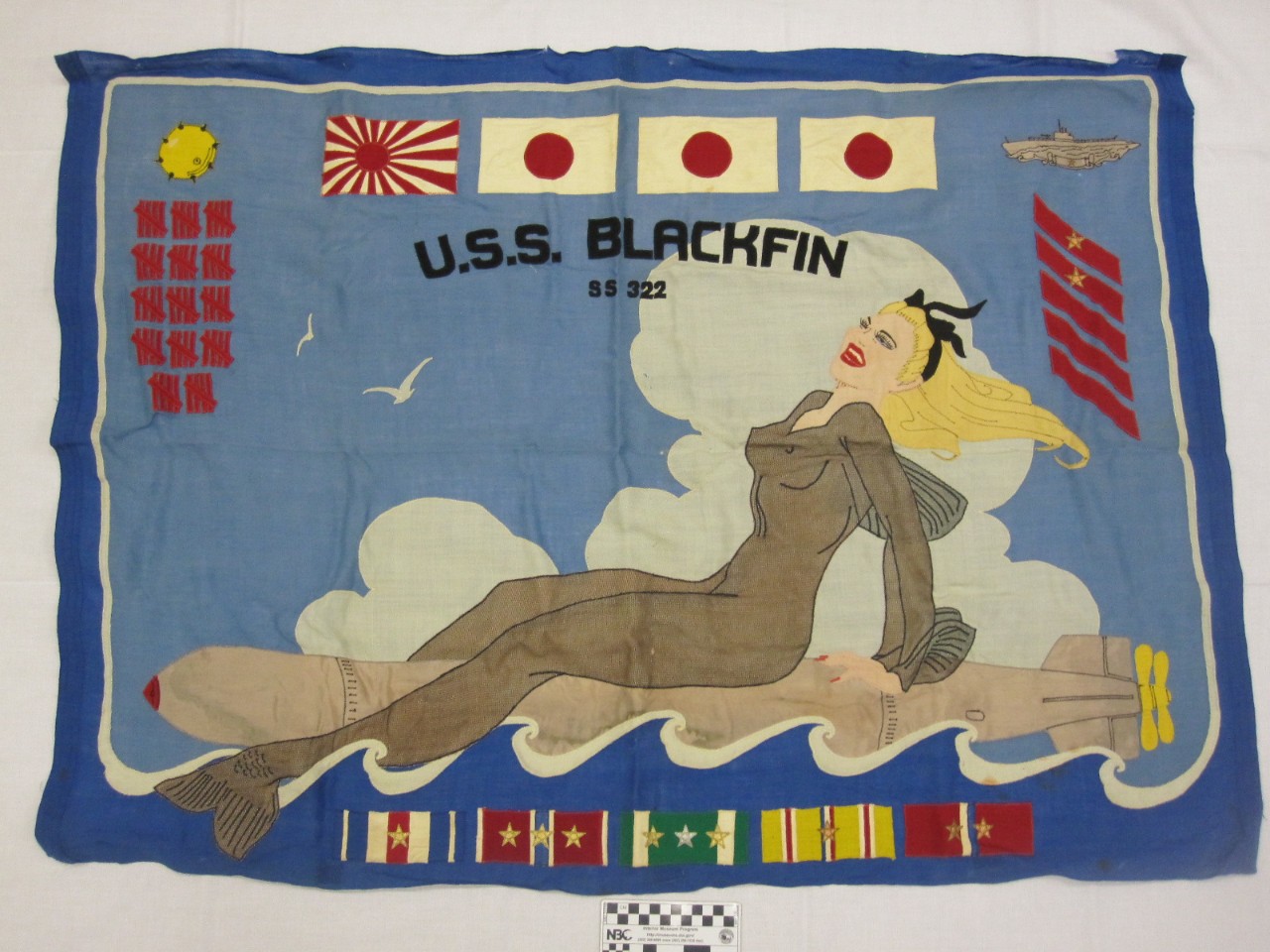 The first war patrol of the new submarine USS Blackfin (SS-322), under the command of Commander G. H. Laird, Jr., had been frustrating. Operating in the vicinity of the Philippines, she succeeded in sinking one ship, the 2,745-ton Unakai Maru No. 12, and then stalked another ship that was then positively identified as a Japanese hospital ship and was not attacked. Toward the end of the patrol, Blackfin was ordered to rendezvous with a U.S. Army unit off the coast of Mindoro to take aboard current Japanese ciphers and codebooks recovered from a captured small Japanese patrol boat. After delivering the valuable intelligence material to an Australian corvette (HMAS Kiama), Blackfin arrived in Freemantle, Australia, where the skipper fell ill and was relieved by Lieutenant Commander William L. Kitch.

On 24 January 1945, on her second War Patrol, Blackfin was operating in the South China Sea, east of Khota Baru, Malaysia, as part of a submarine wolfpack under the overall command of Commander Thomas Wogan, embarked on USS Besugo (SS-321). Other submarines in the wolfpack were USS Hardhead (SS-365) and USS Cobia (SS-245). Tipped off by Ultra intelligence, the wolfpack was awaiting the passage of Japanese Convoy HI 87A from Hong Long to Singapore via Yulin, China. It consisted of the 10,000-ton tanker Sarawak Maru, escorted by the destroyer Shigure and three smaller escorts, Kanju, Miyake and Kaibokan 13.

At 0502 24 January, Blackfin gained SJ radar contact on the convoy at a range of 20,000 yards, and at 0515 issued a contact report to Besugo and Hardhead, which began to close the contact. Blackfin commenced a pre-dawn surface attack. At 0609, the submarine fired three bow torpedoes at the tanker Sarawak Maru at a range of 1,500 yards. The first torpedo was believed to have hit the tanker when, at 0610, one of the escorts was sighted dead ahead. Kitch quickly shifted targets and fired two torpedoes at the contact. The first torpedo hit the destroyer just abaft the bridge, quickly enveloping the target in a cloud of white smoke. At the same time, a second explosion was heard, which Kitch assessed as another of the first three torpedoes hitting the tanker.

As the destroyer began to sink, Kitch turned and fired three torpedoes from his stern tunes at the tanker, one of which was believed to hit. One of the other escorts then opened fire with guns on Blackfin and, at 0711, Kitch took her down. According to Japanese records none of Blackfin’s torpedoes fired at the tanker actually hit, and may have detonated prematurely or in the tankers wake. However, the torpedo that hit the destroyer was fatal, bringing an end to Shigure, one of the most legendary ships in the Imperial Japanese Navy.

Shigure (“Autumn Shower,” although some accounts translate it as “Drizzle,”) had a reputation as a “lucky” or “unsinkable” ship, the veteran of many ferocious battles and sole survivor of two. Shigure participated in the Battle of the Coral Sea in May 1942, then in the Aleutians operation as part of the Battle of Midway. In November 1942, Shigure served in a distant cover role in the Friday the 13th Battle off Guadalcanal, and so missed the worst of the battle, but she did rescue survivors of the crippled Japanese battleship Hiei, which was bombed and sunk the next day. Shigure then survived eight “Tokyo Express” runs to Guadalcanal, which cost the Japanese multiple other destroyers.

In mid-1943, Shigure became the flagship of Captain Tameichi Hara, commander of Destroyer Division 27. Before the war, Hara had authored the Imperial Japanese Navy manual on torpedo attacks, which became official doctrine. He was the only skipper of a Japanese destroyer (Amatsukaze) at the start of the war to survive the entire war, including the sinking of the light cruiser Yahagi, which he commanded as part of the battleship Yamato’s suicide attack at Okinawa in April 1945. After the war, Hara authored the book, Japanese Destroyer Captain, which for many years was one of the few English translations of the Japanese side of the war (and was one of the first books I read as a kid after Clifford the Big Red Dog).

In July 1943, Shigure was the sole survivor of four Japanese destroyers in the Battle of Vella Gulf, after which it was discovered that she had been hit by a U.S. torpedo that failed to explode. She was then in the Japanese formation when Amagiri rammed and sank future U.S. President John F. Kennedy’s PT-109. In October 1943, Shigure’s torpedoes contributed to the severe damage of the destroyer Selfridge (DD-357) during the Battle of Vella LaVella. In November 1943, she survived the Japanese defeat in the Battle of Empress Augusta Bay, as well as the major U.S. carrier air raid on the Japanese base at Rabual, and she rescued 70 survivors of the transport Toyko Maru.

In January 1944, Shigure took her first serious damage when a bomb hit her Number 2 turret, killing 21, during the two days of U.S. carrier air strikes on Truk. Although damaged, Shigure was one of the few ships to survive. In June 1944, Shigure participated in Operation Kon, an attempt to disrupt the Allied landings at Biak, New Guinea, where she took two shell hits from U.S. cruisers, which killed seven, but she also rescued 110 survivors of the Japanese destroyer Hurusame. Later that month, Shigure rescued survivors of the aircraft carrier Hiyo, sunk during the Battle of the Philippine Sea.

During the Battle of Leyte Gulf, Shigure was hit by a bomb on 24 October 1944 that caused minor damage and killed five. She was then badly battered on the night of 24–25 October, but was the only ship of Vice Admiral Nishimura’s “Southern Force” to survive the Battle of Surigao Strait (two Japanese battleships, one heavy cruisier, and three other destroyers were lost, almost all with virtually their entire crews).

On 8 November 1944, Shigure was possibly responsible for sinking the U.S. submarine Growler (SS-215) off Mindoro. (Growler had previously been the command of Howard Gilmore, who was posthumously awarded a Medal of Honor after he gave the order to “take her down” while he was still gravely wounded on the bridge during a Japanese air attack). In December 1944, Shigure was escorting the new Japanese aircraft carrier Unryu when the carrier was torpedoed. Shigure rescued 145 survivors, but suffered a mechanical casualty and returned to Japan while the other two escorts proceeded to the Philippines, where they were sunk, making Shigure arguably the “sole survivor” of a third action.

The torpedo from Blackfin ended Shigure’s incredible run of good fortune. Although she did not prove to be “unsinkable,” she was still comparatively “lucky.” Numerous Japanese destroyers were lost with all hands or most of their crews during the war. Shigure sank slowly enough that the Japanese rescued 270 survivors and only 37 crew members were lost.

The battle for Convoy HI 87A didn’t end there though. Shortly after Blackfin’s attacks, Besugo commenced her attack. The remaining Japanese escorts at first drove off Besugo with gunfire and depth charges, but “she persisted” and, 20 minutes, later Besugo fired six torpedoes at the tanker Sarawak Maru. At least one of these hit, causing damage, but failing to sink her. Besugo then survived 22 depth charges from the Japanese escorts and, then later in the afternoon, she survived 32 more depth charges. Sarawak Maru made it to Singapore and was repaired, but as she was departing on 19 March, she hit a mine that had been laid by a U.S. Army Air Forces B-29. She was beached, but burned, rolled over, and then sank.

Blackfin conducted three more war patrols without sinking anything. Later in her career, she was in the 1963 screwball comedy Move Over, Darling starring Doris Day, James Garner, and Polly Bergan (not sure what Blackfin did in the movie), but in 1968 she had a prominent role in Ice Station Zebra, starring Rock Hudson.

On Besugo’s next patrol, she sank the German submarine U-193 in the Java Sea on 23 April 1945. U-193 was one of several German submarines known as the “Monsun Gruppe” that operated from Japanese-occupied Penang, Malaysia, mostly in the Indian Ocean. U-193 was sunk only a couple of weeks before Germany’s surrender.

Both Lieutenant Commander Kitch and Commander Wogan were awarded Silver Stars for the action against the Sarawak Maru convoy (it was Wogan’s second of three Silver Stars to go with a previous Navy Cross). Kitch’s award citation reads:

The President of the United States of America takes pleasure in presenting the Silver Star to Commander (then Lieutenant Commander) William Kitch, United States Navy, for conspicuous gallantry as Commanding Officer of USS BLACKFIN (SS-322) in action against enemy Japanese forces during the SECOND War Patrol of the Submarine in the South China Sea, from 2 January to 15 February 1945. Demonstrating outstanding ability, Commander Kitch attacked and sank a 1,500 ton Japanese destroyer and damaged a 10,000-ton tanker. His initiative, courage and devotion to duty in the face of grave hazards were in keeping with the highest traditions of the U.S. Naval Service.