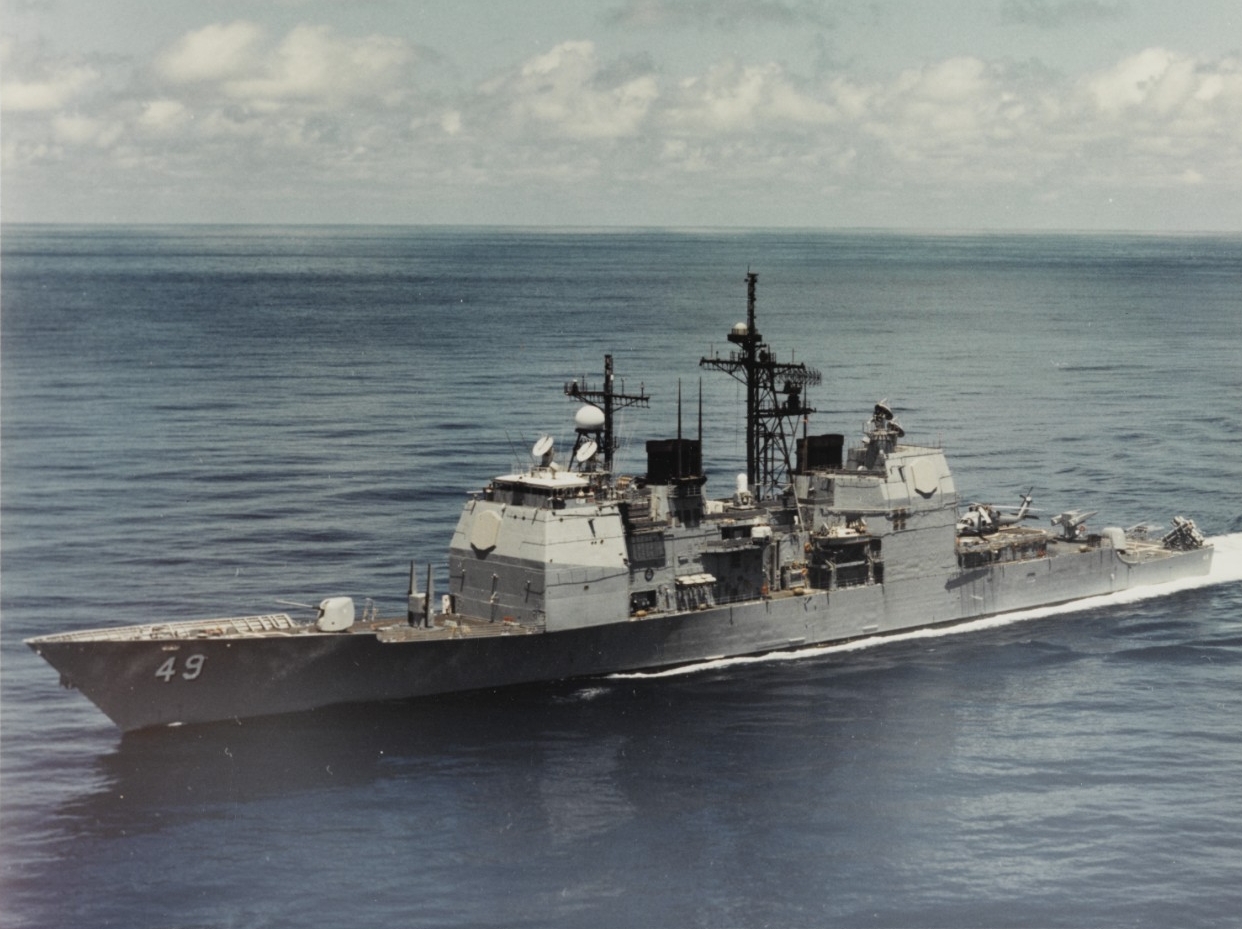 Following the execution of Operation Praying Mantis on 18 April 1988, President Ronald Reagan gave U.S. Navy ships authority to engage Iranian warships that were in the act of attacking neutral merchant ships in the Arabian Gulf. This was an even more aggressive expansion of the previous rules of engagement, which only allowed U.S. Navy ships to aggressively maneuver to deter a potential Iranian attack on neutral shipping, but to fire only in self-defense or perception of Iranian hostile intent toward a U.S. Navy ship. U.S. Navy ships were still barred from taking retaliatory action against an attack on neutral shipping that had already occurred. The U.S. Navy also increased its force levels inside the Strait of Hormuz.

Over the objection of CNO Admiral Carlisle Trost, the Secretary of Defense approved orders sending the Aegis cruiser USS Vincennes (CG-49) on a short-notice deployment into the Arabian Gulf—the first time a “latest-and-greatest” Aegis cruiser had operated in the very confined water space inside the Arabian Gulf. The Aegis cruiser had by far the most sophisticated radar and anti-aircraft missile suite in the world. Vincennes had a reputation as a “robo-cruiser,” partly because of her powerful technological capability and partly because of the particularly aggressive way in which Captain William C. Rogers III handled his ship. Captain Rogers repeatedly lobbied the commander of the Joint Task Force Middle East, Rear Admiral Anthony “Tony” Less, to permit Vincennes to take a more active role than just providing air defense coverage to the southern Arabian Gulf.

The severe losses inflicted on the Iranian Navy during Operation Praying Mantis in April 1988 bought only about a month of relative calm. The Iranian Revolutionary Guard Corps Navy (IRGCN) which had suffered much less loss and damage than the regular Islamic Republic of Iran Navy (IRIN) increased their tempo of operations in late May 1988. Continued Iraqi attacks on land and at sea in the northern Arabian Gulf caused the Iranians to resume retaliatory attacks on neutral merchant shipping in the southern Arabian Gulf, which was presumed by the Iranians to be providing indirect aid to the Iraqi war effort. In addition, the Iranian Air Force deployed three F-14 Tomcat fighters (provided by the United States before the overthrow of the Shah of Iran) from Bushehr in the northern gulf, to Bandar Abbas on the Strait of Hormuz. Although Iranian F-14s had not been fitted with an air-to-ground capability when delivered, the Iranians had shown considerable ingenuity in modifying their aircraft to carry ordnance they weren’t designed for, including their U.S.-supplied F-4 Phantom II and P-3 Orion aircraft. Although there was no actual intelligence that the Iranians had modified their F-14s with air-to-surface missiles, it was assessed to be possible that they could have done so.

On 2 July 1988, the cruiser USS Halsey (CG-23) issued radio warnings to two Iranian aircraft near the Strait of Hormuz before the contacts turned away. Later the same day, the frigate USS Elmer Montgomery (FF-1082) fired warning shots at three IRGCN speed boats that were in the process of attacking the Danish-flag ship Karama Maersk. On the morning of 3 July, several IRGCN small boats threatened a Pakistani merchant ship. Rear Admiral Less concurred with sending a helicopter from Vincennes to investigate. As a precaution, Rogers moved Vincennes 50 miles off her assigned air defense station, south of Abu Musa Island, northeast toward the Strait of Hormuz, an action countermanded by the destroyer squadron (DESRON) commander. The helicopter continued to monitor several IRGCN speed boats that were still in Iranian territorial waters. One of the IRGCN boats fired ten rounds of machine gun fire ahead of the helicopter. The helicopter reported it was under fire. Rogers reversed course again back toward the Strait of Hormuz at maximum speed in response to the helicopter’s report, and in doing so crossed into Iranian territorial waters along with Elmer Montgomery, violating standing orders not to go into Iranian waters, due to the fact that his helicopter reported being under fire.

As the Vincennes and Elmer Montgomery closed on the IRGCN boats, two of the IRGCN boats turned toward the U.S. ships, while others appeared to be on erratic courses. Assessing that the IRGCN boats were commencing an attack, Captain Rogers requested permission from Rear Admiral Less to open fire, which was granted, although Less did not know that Vincennes was inside Iranian territorial waters. At 0943, Vincennes opened fire and the IRGCN boats responded with ineffective machine gun fire. Vincennes fired almost 100 5-inch rounds, hitting and sinking two IRGCN boats and damaging a third with a near miss.

At 0947, Iran Air Flight 655, an Airbus A300, took off 27 minutes late on a regularly scheduled flight (every Sunday and Tuesday from Bandar Abbas, a dual-use military and civilian airport) to Dubai— normally a short 30-minute flight. The pilot, Moshe Rezaian, was very experienced on this particular route. The flight was slightly off center, but still well-within the published flight corridor, Amber 59. Rezaian had no idea a surface action was going on directly under his flight path. Although Flight 655 was detected by Vincennes’s radar shortly after takeoff, the cruiser also detected a Mode II (military) identification, friend or foe (IFF) reading, most likely from an F-14 on the ground at Bandar Abbas. The operator mistakenly correlated the Mode II signal with the aircraft taking off rather than with the plane on the ground. The Aegis detected Flight 655’s Mode III (civilian) IFF transponder soon after take-off, but Vincennes’s anti-air warfare coordinator accepted the Mode II correlation as valid since Iranian military aircraft were known to transmit both Mode II and Mode III IFF. Just to be sure, the anti-air warfare coordinator had a Sailor check the published flight schedule, and was told there was none (this was partly due to darkness in CIC, a time-zone change between Bandar Abbas and Dubai, and that Flight 655 was late). As a result, while in the middle of a surface action, Rogers received a report that an Iranian F-14 had taken off from Bandar Abbas and was on a course toward Vincennes. Also, at that moment, Vincennes’s forward 5-inch mount jammed, and Rogers ordered the rudder hard-over to bring her aft gun to bear, which caused the ship to heel so far over that just about everything went flying in the CIC and on the bridge.

Meanwhile, USS Sides (FFG-14), under the command of Commander David Carlson, operating in the Strait of Hormuz, detected the takeoff of Flight 655, and was informed of the designation as an F-14. Carlson ordered verbal radio warnings which resulted in no acknowledgement from Flight 655. Carlson then ordered Sides’s missile radar to paint the target, an action intended to get a reaction (which would be likely from a military aircraft equipped with a radar warning receiver) but got none. With no electronic emissions indicative of an F-14, and with Sides’s radar continuing to indicate a gradual ascent to flight altitude by the contact, Carlson assessed it to be a civilian airliner. Carlson assumed that the Aegis radar on Vincennes would have a better picture than he did, so he did not transmit his assessment.

Vincennes broadcasted multiple radio warnings to the contact as it closed at 360 knots, with no response. Rogers asked for an update on the contact using its computer-generated track ID number, 4474. The response from CIC was that “TN 4474 is descending, speed 450 knots.” This report was true, but for the wrong aircraft. The Aegis system computer had correlated Sides’s radar track number, TN4131, to Flight 655. TN 4474 had been reassigned by the computer to what was a U.S. Navy jet over the Gulf of Oman descending toward the carrier. By now, the CIC on Vincennes was convinced an Iranian F-14 had taken off from Bandar Abbas to help protect the IRGCN speedboats and was descending to attack Vincennes, even though the cruiser’s own radar showed TN4131 ascending, and squawking only the correct Mode III IFF.

Given the short flight duration, Rezaian’s cockpit workload was heavy, and he was in contact (in English) with either Bandar Abbas or Dubai air traffic control during much of the flight. It will never be known whether he ever heard the radio warnings, or if his radio was set to the right frequency, or if he heard the warnings. Did he understand they were meant for him? It is not known whether he received the September 1987 notice to airmen (NOTAM) requiring all aircraft in the Arabian Gulf to monitor the international air distress and military air distress frequencies, and be prepared to identify themselves to U.S. Navy ships. Whatever the case, he did not respond. After repeated warnings—seven on military air distress and three on international air distress, but none on air traffic control frequencies—and the contact approaching to within 10 miles, Rogers initiated the sequence of orders to fire. Two SM-2MR missiles were fired and two hit, one in the wing, the other the tail. The plane broke up in flight, and bodies fell from the sky. It wasn’t long before Dubai tower initiated queries for the missing aircraft, and the IRGCN speedboats were directed by higher authority to break off the engagement with Vincennes and commence a search and rescue mission, which was futile.

The post-mortem of the shoot-down would be one of the more emotionally charged events in recent U.S. naval history, as the shock set in that the most sophisticated anti-aircraft weapon system in the world had accidentally shot down a commercial airliner. Unsubstantiated rumors and speculation quickly spread, including via intelligence channels. The assumption was that the Iranians had to be conducting some sort of nefarious activity, such as having the airliner provide cover for an F-14 flying on its wing, or that because the bodies were all found without clothes (which had been blown off) the Iranians had packed the plane with people already dead in order to create an incident to discredit the United States. The reality is that it was just a commercial airliner that took off late.

The investigation of the shoot-down by Rear Admiral William Fogarty accurately depicts what happened, although some details were initially redacted from public release, such as the fact that Vincennes had gone into Iranian territorial waters after the IRGCN speedboats, which were not actively attacking neutral ships, and which had fired only a short burst, probably as a warning, at Vincennes’s helicopter. Chairman of the Joint Chiefs of Staff Admiral William Crowe’s statement (at a press conference shortly after the event) that Vincennes was operating in international waters was incorrect— which he later publically admitted.

The investigation concluded that “Based on the information used by the CO in making his decision, the short time available to him in which to make his decision, and his personal belief that his ship and USS Montgomery were being threatened, he acted in a prudent manner.” Rear Admiral Fogarty did not recommend any disciplinary action, which was backed all the way up the chain of command. Rogers was awarded an end-of-tour Legion of Merit. There were others in the Navy—including commanding officers (COs) of other ships on the scene who had correctly evaluated the contact as a commercial airliner—who were less charitable, believing that Rogers’s over-aggressive actions had gotten him into a jam of his own making. There was a combat camera team aboard the Vincennes, and the footage depicts considerable confusion and even ill-discipline amongst the crew (cheering, shouting, football game atmosphere) that contributed to one of the most tragic events in U.S. Navy history. For their part, the Iranians still believe that the shoot-down was deliberate and that it was a war crime.

Sources include: The Twilight War: The Secret History of America’s Thirty-Year Conflict with Iran, by Joint Chiefs of Staff (JCS) Historian David Crist (2012) and “Formal Investigation into the Circumstances Surrounding the Downing of Iran Air Flight 655 on 3 July 1988,” by Rear Admiral William Fogarty.