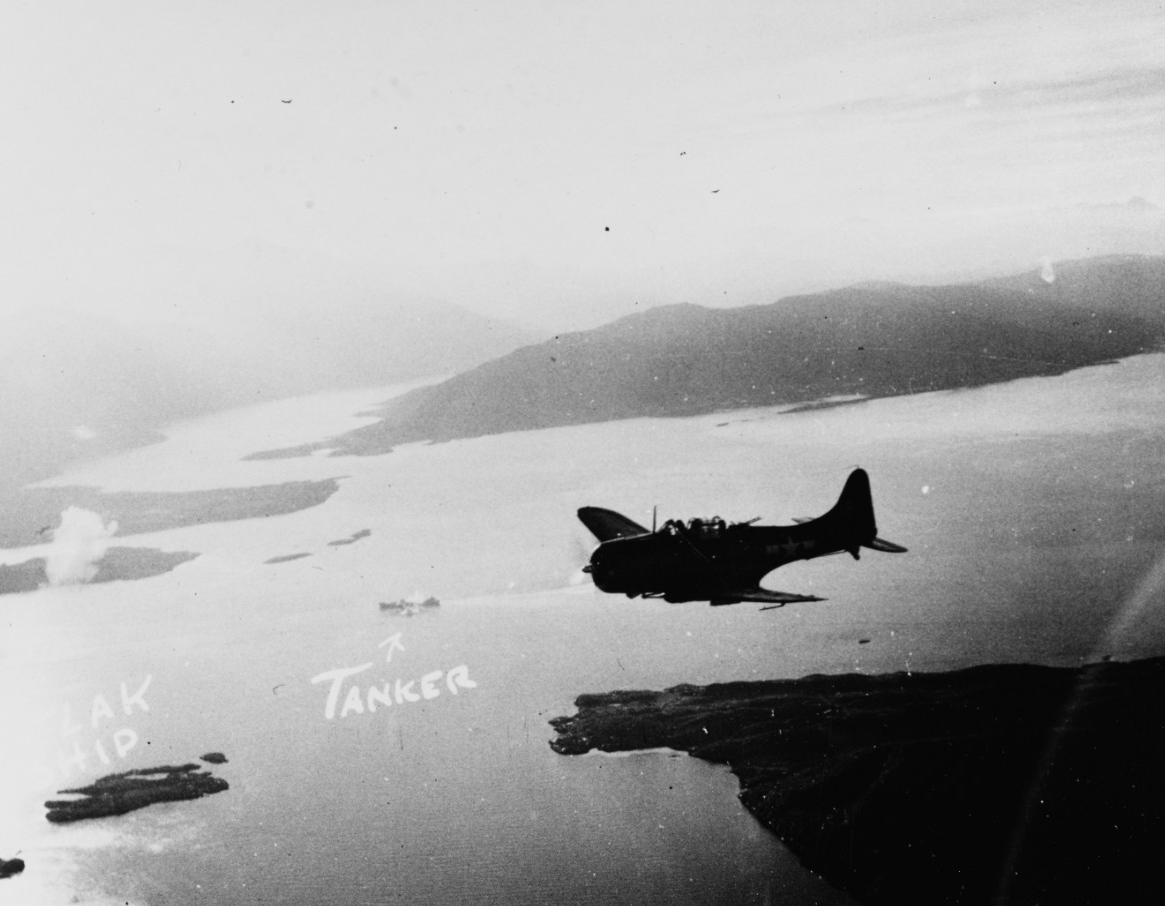 On 4 October 1943, the aircraft carrier USS Ranger (CV-4) launched two strike packages against German shipping targets along the coast of occupied Norway near Bodø (just north of the Arctic Circle) and Sandnessjøen, 100 miles to the south. Armed with excellent intelligence derived from breaking the German’s Enigma code and from the Norwegian Secret Intelligence Service, the raid caught the Germans completely by surprise and was a success.

The strikes by USS Ranger (CV-4) aircraft against targets along the Norwegian coast—north of the Arctic Circle, near Bodø, Norway—on 4 October 1943 were the first Allied carrier strikes against Norway in over two years. Although the German invasion of Norway in April–May 1940 had cost the German navy dearly, it was a debacle for the British and the Royal Navy as well. The Germans lost more sailors (2,375) than soldiers in the invasion of Norway. In the first days of the invasion, Norwegian coastal defense batteries (particularly torpedo batteries) and the British Royal Navy sank one of two heavy cruisers, two of six light cruisers and ten of 20 destroyers in the German navy, including a daring attack right into the Narvik fiord by the battleship HMS Warspite that destroyed eight German destroyers on 13 April 1940. However, the Royal Navy’s attempt to defend Norway ended badly on 8 June 1940 when the German battle-cruisers Scharnhost and Gneisenau caught the British aircraft carrier HMS Glorious and her two escorting destroyers Acasta and Ardent in the Norwegian Sea, sinking all three ships, with the loss of 1,519 British sailors and only 40 survivors—one each from the two destroyers, which had valiantly tried to protect the carrier to the bitter end. After that, the Royal Navy stayed clear of Norway, which became a base for German U-boats and surface combatants, including the battleship Tirpitz.

By late 1943, with the battleship Bismarck sunk in 1941 and the battle-cruiser Gneisenau badly damaged during the “Channel Dash” from Brest, France to Germany in 1943, the remaining German major combatants—battleship Tirpitz, battle-cruiser Scharnhorst, and “pocket-battleship” Lutzow—were based in the far north of Norway (along with 14 destroyers and over 20 U-boats) where they could threaten the convoy route to the Soviet Union. The Royal Navy had to keep extensive forces based at Scapa Flow to guard against a breakout into the Atlantic by the German “fleet in being” based in Norway.

In May 1943, a U.S. Navy force augmented the British Home Fleet, freeing some British battleships to participate in Mediterranean operations. This U.S. force, under the command of Rear Admiral Olaf M. Hustvedt—who was embarked on heavy cruiser USS Tuscaloosa (CA-37)—consisted of two new battleships, USS Alabama (BB-60) and USS South Dakota (BB-57), which was recently repaired from her damage at Guadalcanal, and five destroyers. Operating with the Royal Navy, this force “trolled” several times to bait the Germans into coming out to fight, but the Germans refused the offer, and in August 1943, CNO King had gotten tired of it and sent the two battleships to the South Pacific. He replaced them with Ranger, a carrier of an obsolete design not considered survivable in Pacific combat, and the heavy cruiser USS Augusta (CA-31). Rear Admiral Hustvedt remained in command aboard Tuscaloosa.

In September 1943, the German navy sortied in force from Norway (feeling a need to justify their continued expenditure of resources to Hitler). Tirpitz, Scharnhorst, Lutzow and 10 destroyers, using gross overkill, shelled and put troops temporarily ashore on 8 September 1943 to destroy the small Allied outpost and weather station on the Norwegian Arctic island of Spitsbergen, far north of the Arctic Circle. A week later, Tuscaloosa and destroyer USS Fitch (DD-462) landed Free Norwegian troops to re-occupy the island.

On 22 September 1943, a force of six British X-Craft midget submarines attacked Tirpitz in Altafiord, Norway in a daring operation. Two of the X-Craft were lost while being towed across the Norwegian Sea—one aborted its attack due to mechanical problems—although its target, Scharnhorst, was underway and out of the fiord. The other three were lost while laying bottom mines under the Tirpitz. The X-Craft inflicted enough damage that Tirpitz was out-of-action for many months—until she was bombed and sunk by British bombers. The cost was nine British sailors killed and six POWs. Two crewmen were awarded Britain’s highest award, the Victoria Cross.

With the Tirpitz out of action, the commander of the British Home Fleet determined that the time was right to try a carrier attack on Norway. The timing of the strike was driven by Ultra code-breaking intelligence and radio-intelligence that indicated the large tanker Schleswig would be making a run to supply the German warships in northern Norway. Extensive force and weather intelligence was provided by Norwegian Secret Intelligence Service agents via radios inside occupied Norway. The British carrier HMS Furious was undergoing re-fit, and the carrier HMS Formidable’s participation was cancelled because of forecast weather conditions; i.e., the forecast wasn’t bad enough; there was insufficient cloud cover to protect her torpedo bombers from superior German fighter aircraft. The prospect of clear skies, however, did not stop Ranger, which was under the command of Captain Gordon Rowe. The carrier’s air group was still flying older F4F Wildcats (27), and SBD Dauntless dive bombers (27), but did have 18 of the newer TBF Avenger torpedo bombers.

The Ranger task force departed Scapa Flow on 2 October 1943, covered by British battleships HMS Duke of York and HMS Anson, and was not detected by the Germans during the transit to the far north of the Norwegian Sea. Ranger’s strike consisted of a Northern Attack Group (20 SBD dive bombers, escorted by eight F4F Wildcat fighters) and a Southern Attack Group (ten TBF torpedo bombers, carrying bombs, escorted by six F4Fs) with a Norwegian navigator flying in the lead plane of each attack group.

The Northern Attack Group launched first, commencing at 0618 on 4 October 1943. At 0730, as the group approached the Bodo area, four dive bombers and two fighters peeled off to attack 8,000-ton German freighter La Plata, which was badly damaged and beached to prevent sinking. As the other aircraft approached Bodø at 0730, a German convoy was sighted, escorted by the German minesweeper M 365. Two dive bombers attacked Kerkplein, while eight others went after the large tanker Schleswig. The earlier intelligence was right. Schleswig was also badly damaged and had to be beached—but was later salvaged. The eight remaining dive-bombers attacked four small German cargo ships near Bodø, sinking one, seriously damaging two, and strafing the fourth. Two dive bombers were shot down by German anti-aircraft fire; the two aircrew in one were killed and the two in the other became POWs. During the first raid, the Germans jammed their own radios with so much chatter that they were unable to get warning through to other units.

The Southern Attack Group launched 50 minutes after the Northern Group at 0708 and targeted shipping around Sandnessjøen, about 100 miles south of Bodo. The strike bombed the Norwegian (German-controlled) cargo ship Topeka, and set it on fire, killing three Norwegian crewmen and several members of the German anti-aircraft detachment, which had succeeded in downing one of the Avengers—only the pilot survived. The aircraft also bombed and sank the Norwegian cargo liner Vaagen, whose crew had already abandoned ship after witnessing the attack on Topeka, so there were no Norwegian casualties. The U.S. aircraft also bombed and sank the 4,300-ton German navy troopship Skramstad—which had been “requisitioned” from Norway. Accounts vary wildly as to how many German troops went down with the ship. Norwegian intelligence claimed 360, but some modern accounts citing official German records say as few as 37. Samuel Eliot Morison, in his History of U.S. Naval Operations in World War II, also claiming to cite official German records, put the death toll at 200. U.S. aircraft also strafed the German cargo ship Wolsum and bombed an ammunition barge—which blew up—for good measure.

The mission achieved surprise and was assessed as a great success, particularly in that it severely disrupted shipment of critical iron ore from northern Norway to Germany for several months, and especially since it was the first combat mission for 60 percent of the aircrews. A total of four U.S. aircraft were lost—three to anti-aircraft fire—and one Wildcat to accident (the pilot survived). Six aircraft were damaged by anti-aircraft fire. Commander J. A. Ruddy, the commander of Ranger Air Group and of the Southern Attack Group, would be awarded a Distinguished Flying Cross. The downed Avenger was located in 1987 and the remains of the two aircrewmen were recovered. A blade from the propeller is now in the National Naval Aviation Museum in Pensacola. One of the two Dauntlesses shot down near Bodø was found in 1990, and the remains of the pilot and gunner were recovered. There is a memorial near Bodø in honor of the crews and casualties of Operation Leader. Ranger returned to the United States in December 1943 and served the rest of the war as a training carrier.

At around 1400 on 4 October 1943, radar detected three German aircraft approaching Ranger. By then, the unlimited visibility of the morning had given way to extensive cloud cover. Two pairs of Ranger fighters belonging to VF-4 "Red Rippers" played cat and mouse with the German aircraft in the clouds. Finally, Lieutenant Junior Grade Dean S. “Diz” Laird and his flight leader located a Ju-88D twin-engined bomber and took turns shooting it full of holes—unlike Japanese bombers, German aircraft did not immediately burst into flame when hit—before the plane finally crashed into the ocean. Laird subsequently sighted an He-115B twin-engined float plane flying at very low altitude and hit it. The float plane attempted to land on the water, but one of the float pylons collapsed and it cartwheeled into the sea. These were the first German aircraft shot down by U.S. Navy aircraft.

After Ranger returned to the states, VF-4 transitioned to the new F6F Hellcat fighter. Flying from USS Bunker Hill (CV-17), Laird shot down two Japanese Kawasaki “Tony” fighters near Manila on 25 November 1944. on 16 January 1945, near Hainan Island, China—after VF-4 had cross-decked to the USS Essex (CV-9)—Diz was flying in great pain with what turned out to be an inflamed appendix when he shot down a Mitsubishi “Hamp” fighter while protecting a U.S. Navy aircraft on a reconnaissance mission. On 16 February, flying near the Japanese Home Islands, Diz shot down a Mitsubishi Ki-21-II “Sally” twin-engined bomber and, the next day, shot down two more fighters. Diz would be credited with 5 ¾ kills at the end of the war. In April 1945, Diz was sent back to the States where he served in Experimental Fighter Squadron 200 (XFV-200) flying kamikaze strike profiles on U.S. ships.

Diz continued serving in the U.S. Navy, including in the Navy’s first jet fighter squadron (VF-171) and first squadron to carrier-qualify in jets, finally retiring in 1971 as a commander. While still on active duty, Diz was one of the pilots flying the simulated Japanese aircraft in the movie Tora! Tora! Tora!,  taking part in the most technically demanding scenes, including the first take-off of a “Val” dive bomber from the carrier Akagi  (USS Yorktown—CV-10—with a fake “Japanese” deck overlaid on the flight deck) and the “Kates” dropping torpedoes over Southeast Loch at Pearl Harbor while attacking “Battleship Row.” At age 95, Diz took the controls of a T-34C, the 100th type aircraft he had flown, flying over 8,000 hours. I had opportunity to speak with Diz aboard the museum carrier Hornet (CV-12) in Alameda, California, in the fall of 2016. He was incredibly sharp and is still alive and well so far as I know. What an extraordinary career, and what a hero he is!

Sources include: Atlantic Battle Won: May 43–May 45, History of U.S. Naval Operations in World War II, Vol. 10, by Rear Admiral Samuel Eliot Morison; “An Ace in the Hole: 'Diz' Laird,” by Mark Carlson, Aviation History, 4 May 2018.