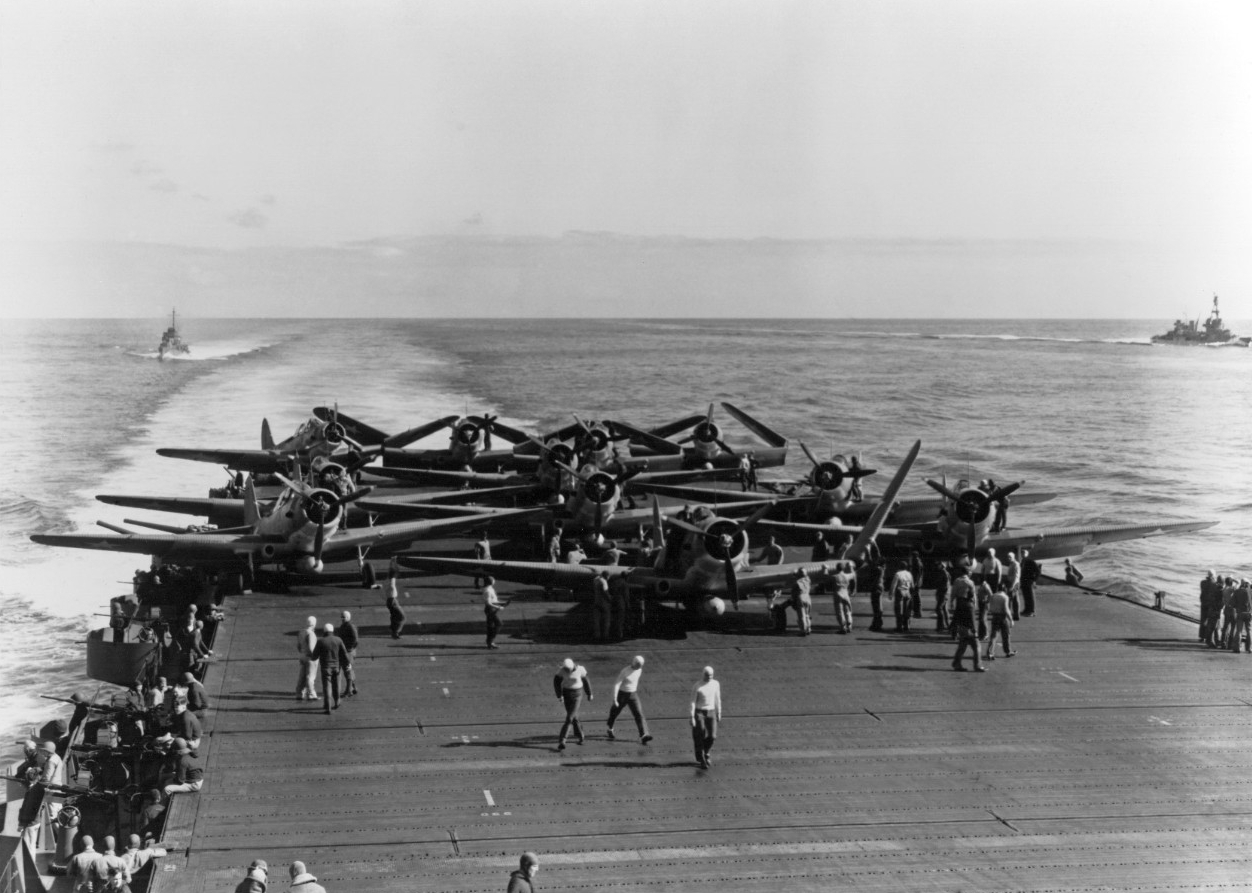 3. Artifact of the Month

On the 4th of June, 1942, four Japanese aircraft carriers faced off against three U.S. aircraft carriers and an island (248 Japanese aircraft to 360 U.S. aircraft). None of the remainder of the overwhelming Japanese force was in a position to affect the outcome of the battle. The reason was because Japanese Admiral Yamamoto had a bad plan based on faulty intelligence, and a gross underestimation of our will to fight. Admiral Nimitz, on the other hand, had a good plan based on exceptional intelligence that gave the us the crucial element of surprise. Like almost everyone in the U.S. Navy at the time, Admiral Nimitz overestimated U.S. operational and tactical prowess relative to the Japanese (Pearl Harbor was not seen as a "fair fight"). Nevertheless, Admiral Nimitz had good reason to believe that he was taking a "calculated risk" with a reasonable chance of success; he did not believe he was making a desperate gamble with the precious remaining U.S. aircraft carriers (or else he wouldn't have done it, and the Marines would still be talking about being abandoned at Midway). As a result, at 0900 on the morning of 4 June, the commander of the Japanese carrier task force, Vice Admiral Chuichi Nagumo had no clue that 152 carrier aircraft were en route to attack him (only at 0820 did he even know one U.S. carrier was even in the area).

Nevertheless, we almost blew it, because at 0900 77 of those aircraft were heading in directions that would miss the Japanese carriers entirely, and had already fractured into at least seven uncoordinated groups. Meanwhile the first waves of U.S. attacks originating from Midway Island were being slaughtered in multiple separate extremely valiant but futile attacks; the costly raids from Midway, and the ferocious resistance of Marine AAA on Midway to the Japanese morning attack, instigated Vice Admiral Nagumo's fateful decision to re-arm his 107-plane reserve strike package with land-attack in place of anti-ship weapons, before he knew about the first U.S. aircraft carrier. The three U.S. carrier torpedo squadrons attacked in three uncoordinated waves; of 41 aircraft only six would survive. The protracted sacrifice of the Midway aircraft and the carrier torpedo bombers would prevent the Japanese from spotting their counterstrike package on deck, which ultimately prevented the Japanese from inflicting severe loss to the U.S. carriers. Of the 77 aircraft that initially missed the Japanese, the 33-plane USS Enterprise (CV-6) dive-bomber strike would by both chance and the astute judgment of Lieutenant Commander Clarence Wade McClusky find their way to the Japanese carriers at the same time 17 dive-bombers from USS Yorktown (CV-5) arrived over target. As a result, three Japanese carriers Akagi, Kaga, and Soryu became flaming wrecks (although Akagi nearly survived because of a U.S. tactical blunder). Fifty U.S. carrier aircraft were unable to engage the Japanese in the first strike. Forty percent of the U.S. carrier aircraft that flew the first strike were shot down, ditched due to battle damage or ran out of fuel, or recovered but were no longer airworthy.

The Japanese carrier Hiryu would survive to get off two separate strikes that left the Yorktown in sinking condition, before a late-afternoon U.S. counterstrike left her a flaming wreck too; all four Japanese carriers would be scuttled by Japanese torpedoes overnight. Just as it appeared that heroic damage control efforts would save the Yorktown, she was torpedoed, along with the destroyer Hammann, by Japanese submarine I-168 on 6 Jun. Hammann sank immediately, and Yorktown went down the morning of 7 June. A Japanese heavy cruiser, the Mikuma, which had been escorting her sister the Mogami, seriously damaged in a collision, was sunk on 6 June by U.S. carrier aircraft. The cost to the Japanese was all four carriers involved, all 248 carrier aircraft, and a heavy cruiser. Although more than 75% of the Japanese aviators lived to fight (and die) another day, the carriers were irreplaceable. Over 3,000 Japanese sailors lost their lives. The cost to the U.S. was the Yorktown and Hammann sunk, about 145 aircraft lost, and 307 personnel killed. The U.S. carriers Enterprise and USS Hornet (CV-8) were never found by Japanese strike aircraft, although both their air groups suffered extensive losses. The battle turned the tide and changed the course of the Pacific War, and had significant impact on the entire course of WWII and the post-war that followed.

Attachment H-006-1 "Battle of Midway Overview" provides a concise recounting of the entire battle and the results.

Attachment H-006-2 "ISR at the Battle of Midway" provides an analysis of U.S. intelligence and reconnaissance success, and Japanese failure, at Midway. It explains why the battle was fought at all.

Attachment H-006-3 "The Sacrifice" provides an analysis of the initial Midway and torpedo bomber strikes. If you are short of time, I would strongly recommend reading this one; it depicts one of the most extreme examples of extraordinary courage against overwhelming odds in all of history, and the sacrifice of these brave Americans deserves to be remembered by everyone in the Navy today.

Attachment H-006-4 "The Victory—Barely" depicts the dive-bomber strikes and aftermath that led to victory, also at considerable sacrifice, and one that we could have easily lost.

3. Artifact of the Month

Attachment H-006-5 is a photo of SBD-2 Dauntless (Bureau Number 2106), one of the most historically significant aircraft in the world, and one of the most important artifacts in the U.S. Navy collection, currently on display at the National Naval Aviation Museum in Pensacola, Florida. The aircraft was parked on Ford Island during the Japanese attack on Pearl Harbor on 7 December 1941. Launched from USS Lexington (CV-2) during the 10 March 1942 raid on Lae-Salamaua, New Guinea, her pilot, Lieutenant (j.g.) Mark Whittier was awarded a Navy Cross for pressing home his attack on Japanese troop transports. Subsequently transferred to the USMC and based at Midway Island, this aircraft, flown by 1st Lieutenant Daniel Iverson of VMSB-241, participated in an unsuccessful attack on the Japanese carrier Hiryu on 4 June 1942, barely returning to Midway Island with 219 holes from Japanese fire. Iverson was awarded a Navy Cross. Later lost on a training mission over Lake Michigan on 11 June 1943 (the pilot survived, but the plane sank), the aircraft was raised from the lake by A and T Recovery on behalf of the U.S. Navy in 1994, restored and placed on display in 2001. (See attachment H-006-5 for the complete history of SBD-2 2106.)

I also recycled H-005-2 "Carrier vs. Carrier" from the previous H-gram on the Coral Sea in the event you want to review the differences in U.S. and Japanese carrier capability, doctrine, and tactics.

This H-gram came out pretty long, but it is the only 75th Anniversary of the greatest naval battle in history.

If you are a die-hard and this isn't enough, read Shattered Sword by Parshall and Tully; extraordinary research, mostly from the Japanese side, and source of much of the revised (and I believe more accurate) interpretations of the battle.