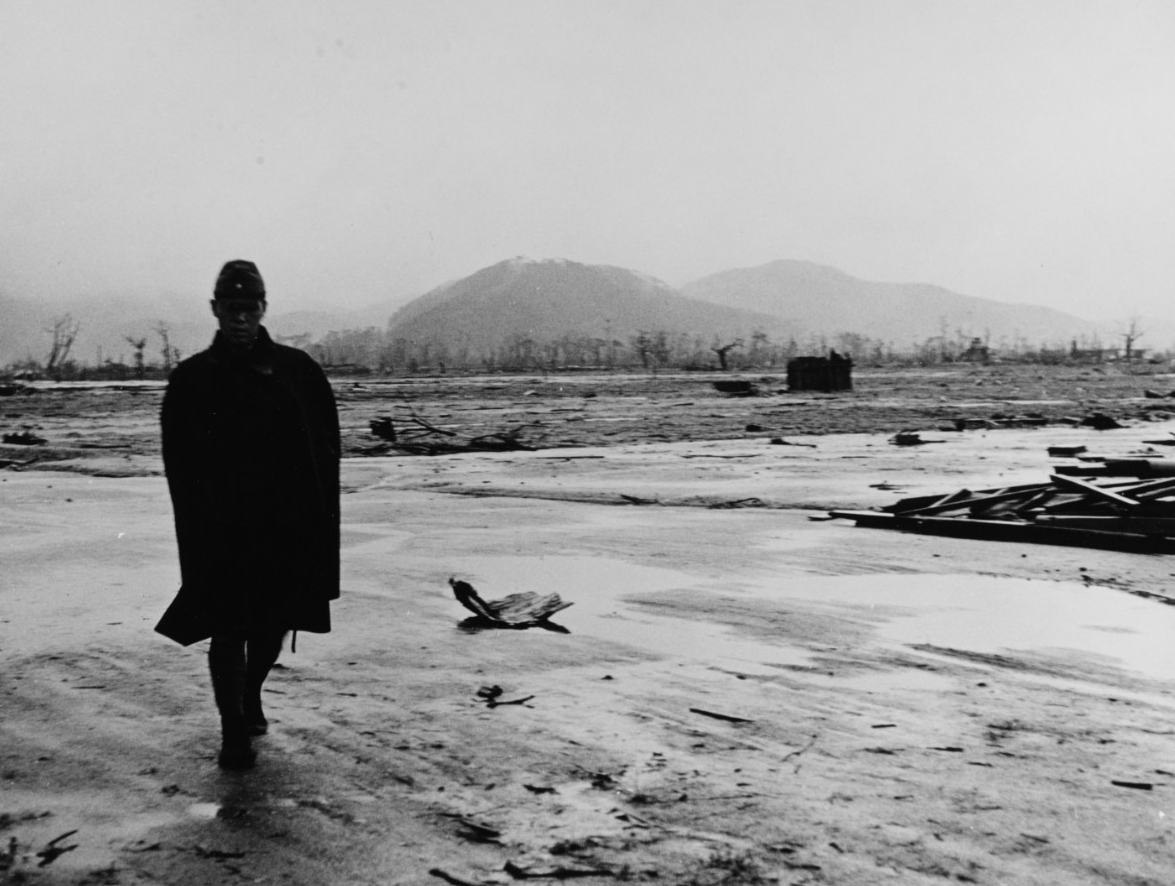 This H-gram includes a history of the critical role played by U.S. Navy personnel in the development and employment of the atomic bomb, as well as a personal account of the events leading up to Operation Desert Shield (1990). Download a pdf of H-Gram 052 (4 MB).

The U.S. Navy’s Role in the Development and Employment of the Atomic Bomb

Inscribed on the “Little Boy” atomic bomb dropped on Hiroshima on 6 August 1945 was a message to Japanese Emperor Hirohito: “from the boys of Indianapolis,” a reference to the 879 crewmen who were lost in the sinking of the heavy cruiser Indianapolis (CA-35) after she delivered critical components of the Little Boy bomb to the B-29 bomber base on Tinian Island. On the receiving end of the bomb were family members of the skipper of I-58, the submarine that sank the Indianapolis. There were also a dozen U.S. prisoners of war, 20,000 Japanese military personnel, and between 70,000 and 126,000 Japanese civilians, who were vaporized or incinerated by the blast (about half) or died of grievous wounds or radiation sickness in the next couple of months. Many others would die from the effects of radiation long afterwards.

Although it is well known that the first atomic bomb was dropped by the B-29 “Enola Gay,” flown by Colonel Paul Tibbets, it is much less well known that the mission commander on the Enola Gay was U.S. Navy Captain William S. “Deak” Parsons, who was also the director of Project Alberta, the weaponization of atomic energy, within the overarching Manhattan Project. Dr. J. Robert Oppenheimer would later state, “It is impossible to overestimate the value which Captain Parsons has been to the project.”

The mission commander on the B-29 that dropped “Fat Man” (the second atomic bomb) on Nagasaki was Parsons's operations officer, Commander Frederick L. “Dick” Ashworth, USN. The head of the Little Boy assembly team was Commander Francis Birch, USNR, and the head of the Fat Man assembly team was Commander Norris Bradbury, USNR. By 1945, there were 41 U.S. Navy officers working at the Manhattan Project Laboratory at Los Alamos, New Mexico, under the direction of Dr. Oppenheimer and his deputy, Captain Parsons. While the eminent scientists worked through the extraordinary challenges of creating a nuclear chain reaction, the military officers and engineers under Captain Parsons assumed the equally important challenges of turning it into a bomb that worked and developing an aircraft that could deliver it. (In addition to his role in the Manhattan Project, Parsons had previously led the development of the radar proximity fuse, which revolutionized U.S. surface ship antiaircraft defenses in the latter half of World War II.) Another Navy officer who played a key role was Rear Admiral William R. Purnell, who was the Navy representative on the three-man committee that provided oversight of the Manhattan Project.

The Navy’s research into atomic energy began with the first lecture in Washington D.C. by Italian refugee and eminent physicist Enrico Fermi, who described the process of nuclear fission that had been discovered only a few months earlier in Sweden and Denmark by Austrian-born refugees from Germany. (Scientists in Nazi Germany learned of the discovery in short order.) Fermi’s brief was as technical director of the Naval Research Laboratory (NRL).

The Navy’s research into atomic energy began with the first lecture in Washington, DC, by Italian refugee and eminent physicist Enrico Fermi, who described the process of nuclear fission that had been discovered only a few months earlier by Austrian-born refugees from Germany in Sweden and Denmark (and was then quickly known by scientists in Nazi Germany). Attending Fermi’s brief was the technical director of the Naval Research Laboratory (NRL). Ross Gunn immediately recognized the potential of atomic energy for submarine propulsion. The Navy’s research into atomic energy commenced in March 1939, seven months before the start of the U.S. Army’s project (although the Navy was focused on propulsion and the Army on weapons). The Manhattan Project subsequently dwarfed the NRL effort as the Manhattan Project had virtually unlimited funding and first priority on scarce resources, such as uranium and plutonium. Nevertheless, a Navy civilian physicist at NRL, Dr. Philip Abelson, developed a process to separate fissile isotope Uranium-235 from the more common U-238 (“liquid thermal diffusion isotope separation”), which the Manhattan Project eventually incorporated and which shaved off precious time in the race to beat the Nazis to the bomb, and then to hopefully head off what was expected to be an incredibly bloody invasion of Japan.

There is no question that the atomic bomb was a terrible weapon, and the entire world should be exceedingly grateful that it has not been used again. It was also a terrible weapon that ended a terrible war, which by then had resulted in the deaths of 60 million or more people. President Harry S. Truman and senior U.S. military leaders were faced with difficult choices to end the war in the Pacific, all of them awful. They chose the option that killed the fewest Americans. It also killed far fewer Japanese than an invasion or continued firebombing, blockade, and starvation would have killed. The idea that there was a more humane way to end that vicious war constitutes wishful thinking.

For more on the U.S. Navy and the atomic bomb please see attachment H-052-1.

On 2 August 1990, the Iraqi Army invaded Kuwait and took control in less than three days. Within a matter of days, the carrier USS Dwight D. Eisenhower (CVN-69) entered the Red Sea via the Suez Canal, and the carrier USS Independence (CV-62) entered the Arabian Gulf from the Gulf of Oman, both carriers prepared to inflict pain on Iraqi forces, if so ordered, should the Iraqis cross into Saudi Arabia.

Shortly after the Iraqi invasion of Kuwait, Commander of the U.S. Seventh Fleet, Vice Admiral Henry H. “Hank” Mauz Jr., embarked on Blue Ridge (LCC-19), received orders to proceed to the Arabian Gulf to assume duty as Commander, U.S. Naval Forces Central Command. Vice Admiral Mauz and key staff members flew to Bahrain, while Blue Ridge and the rest of the staff (including Lieutenant Commander Cox) departed Yokosuka, Japan, on four days’ notice for what would become a deployment just under 10 months long. Before the end of August, U.S. Navy ships had fired warning shots across the bow of Iraqi tankers and commenced enforcement of United Nations-ordered sanctions on Iraq. Six months of buildup later, the U.S. Army and Air Force were ready to do something about the Iraqi invasion.

For more on the initiation of Operation Desert Shield, see attachment H-052-2.

Sources for this H-Gram include Target Hiroshima: Deak Parsons and the Creation of the Atomic Bomb, by Al Christman (Naval Institute Press, 1998); Now It Can Be Told: The Story of the Manhattan Project, by General Leslie M. Groves (Da Capo, 1962); Uncle Phil and the Atomic Bomb, by John and Philip H. Abelson (Roberts, 2008); Indianapolis: The True Story of the Worst Sea Disaster in U.S. Naval History and the Fifty-Year Fight to Exonerate an Innocent Man, by Lynn Vincent and Sara Vladic (Simon and Schuster, 2018). 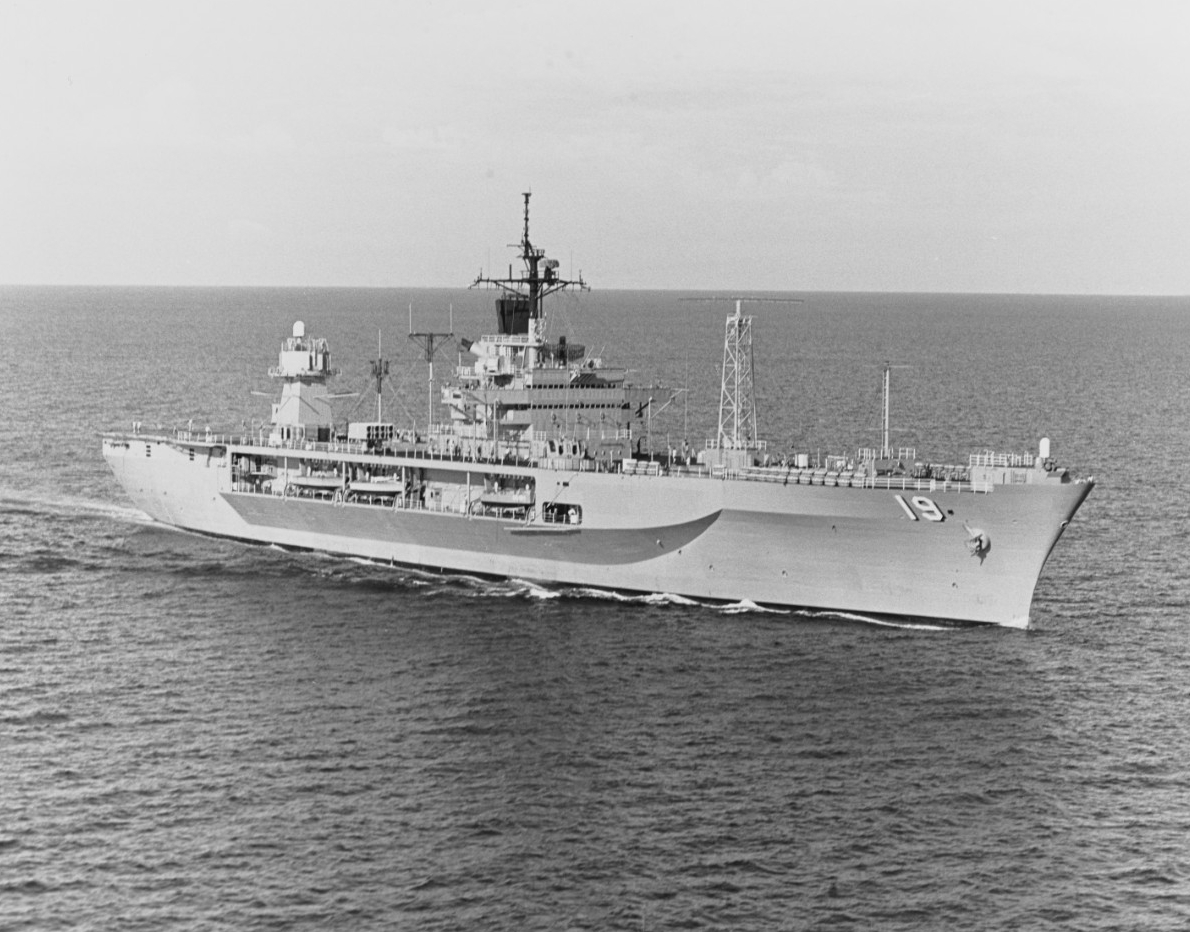