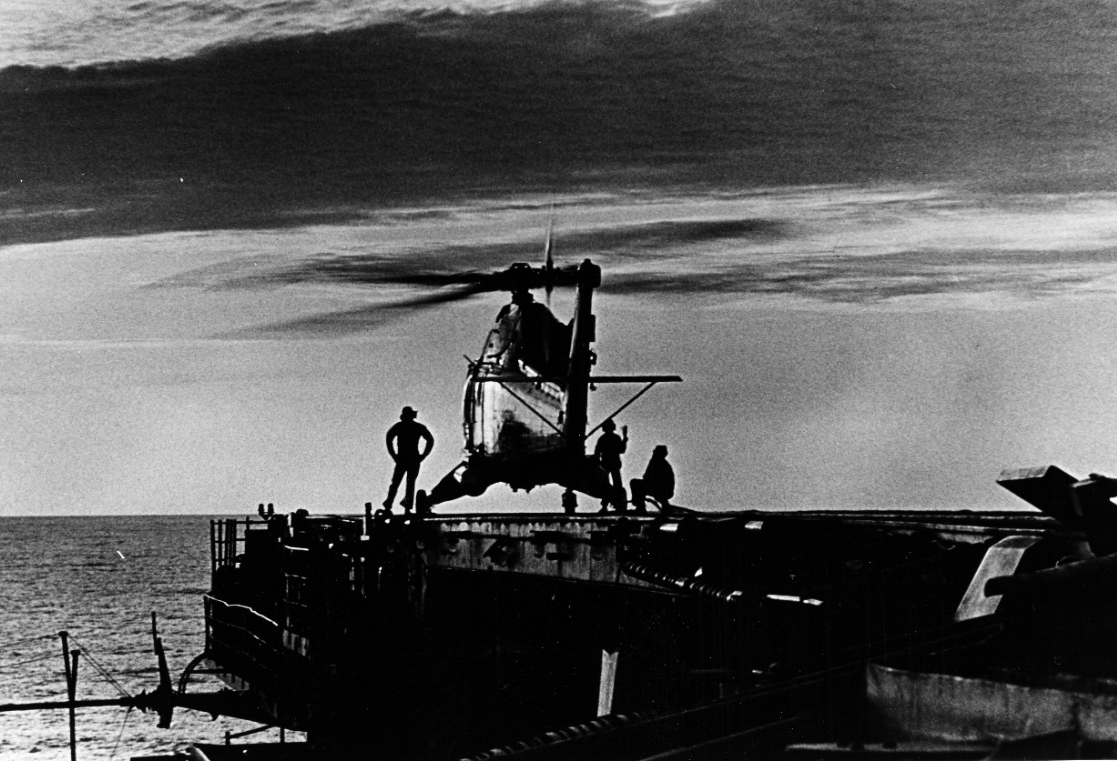 On the night of 18/19 June 1968, an F-4J Phantom II (“Root Beer 210”) of VF-33, flying off USS America (CVA-66), was shot down by an SA-2 surface-to-air (SAM) missile over the southern panhandle of North Vietnam while on a night interdiction mission. The F-4J, piloted by Lieutenant Commander John “Claw” Holtzclaw, out-maneuvered the first pair of missiles. However, the evasive action left the plane low and slow in a classic case of, as later described by Holtzclaw, “out of airspeed, altitude, and ideas,” and the jet was hit and downed by a third missile. Holtzclaw and his radar intercept officer (RIO,) Lieutenant Commander John “Zeke” Burns, both survived ejection and parachuted into a rice paddy (Burns with a leg fracture) in North Vietnam surrounded by hills, trees, and enemy soldiers.

Lieutenant Junior Grade Clyde Everett Lassen and his crew, flying in a UH-2A Seasprite (“Clementine Two”) of HC-7 Det 104, launched shortly after midnight from USS Preble (DLG-15/DDG-46), off the coast of Vietnam to attempt a rescue of the two downed survivors. Of the UH-2A’s four-man flight crew, only Lassen had previous experience with an overland combat search-and-rescue mission. Two North Vietnamese SAMs were fired at Lassen’s helo after crossing the beach, but missed. Guided by the burning wreckage of the crashed F-4J, and aided by flares dropped by other aircraft, Lassen went in for the rescue, which is best described in the text of his Medal of Honor citation:

“For conspicuous gallantry and intrepidity at the risk of his life above and beyond the call of duty as pilot and aircraft commander of a search and rescue helicopter, attached to Helicopter Support Squadron 7, during operations against enemy forces in North Vietnam. Launched shortly after midnight to attempt the rescue of two downed aviators, LT (then LTJG) Lassen skillfully piloted his aircraft over unknown and hostile terrain to a steep, tree-covered hill on which the survivors had been located. Although enemy fire was being directed at the helicopter, he initially landed in a clear area near the base of the hill, but, due to the dense undergrowth the survivors could not reach the helicopter. With the aid of flare illumination, LT Lassen successfully accomplished a hover between two trees at the survivors’ position. Illumination was abruptly lost as the last of the flares were expended, and the helicopter collided with a tree, commencing a sharp descent. Expertly righting his aircraft and maneuvering clear, LT Lassen remained in the area, determined to make another rescue attempt, and encouraged the downed aviators while awaiting resumption of flare illumination. After another unsuccessful illuminated rescue attempt, and with his fuel dangerously low, and his aircraft significantly damaged, he launched again and commenced another approach in the face of enemy opposition. When flare illumination was again lost, LT Lassen, fully aware of the dangers in clearly revealing his position to the enemy, turned on his landing lights and completed the landing. On this attempt, the survivors were able to make their way to the helicopter. En route to the coast he encountered and successfully evaded additional hostile anti-aircraft fire and, with fuel for only five minutes of flight remaining, landed safely aboard USS JOUETT (DLG-29.)”

Lassen initially attempted to use a jungle penetrator to get a hoist through the tree canopy, but two attempts failed due to the density of growth. When he collided with the tree in darkness, the horizontal stabilizer was damaged, as was the starboard cabin door, which later blew off during the egress. Throughout the encounter, Lassen’s two gunners, Aviation Machinist’s Mate Third Class (ADJ3) Don West and Aviation Electrician’s Mate Second Class (AE2) Bruce Dallas (each awarded a Silver Star), responded to and suppressed heavy incoming enemy fire with M-60 machine-gun fire, while co-pilot Lieutenant Junior Grade LeRoy Cook (awarded a Navy Cross) assisted with maintaining situational awareness on the harrowing flight in and out of the trees. The skipper of Jouett, Captain Robert Hayes (awarded a Bronze Star), displayed great initiative and daring in bringing his ship within three miles of the North Vietnamese coast and turning on his flight deck lights, which greatly aided Lassen in getting his bullet-riddled aircraft on board (Jouett rescued eight flyers downed by enemy fire during this deployment). The helicopter Lassen flew would later be lost in an accident in the South China Sea in 1969. Lassen retired from the Navy as a commander in 1982, but, sadly, would die from cancer in 1994 at age 52. The Arleigh Burke–class destroyer USS Lassen (DDG-82), commissioned on 21 April 2001, was named in Clyde Lassen’s honor.

Back to H-Gram 019 Overview