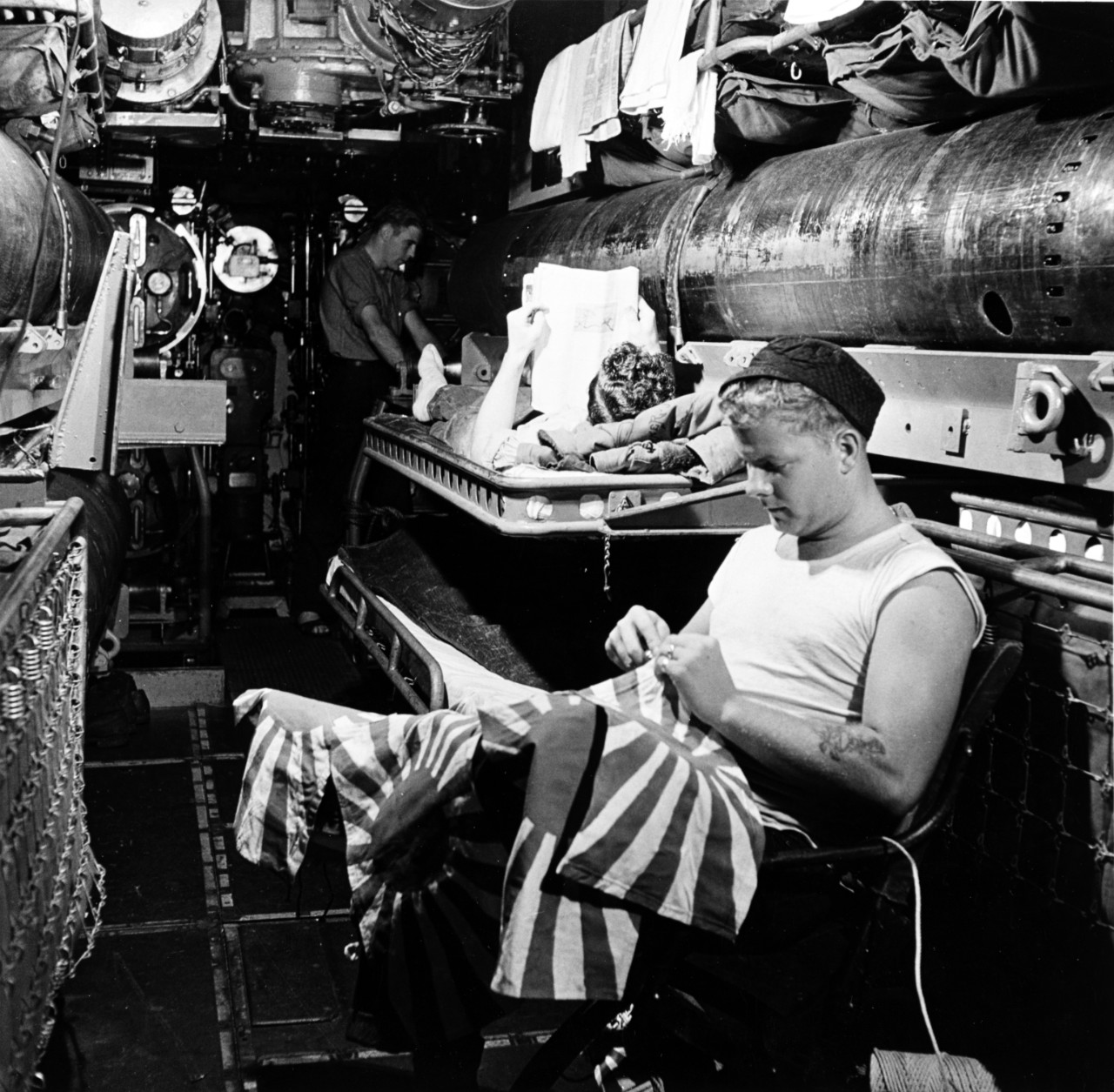 USS Batfish (SS-310) completed seven war patrols, and was credited with sinking nine ships totaling 10,658 tons. On her first war patrol, she missed a shot at the Japanese super-battleship Yamato on 14 January 1944, when her first skipper cautiously opted to submerge rather than use the heavy seas as cover for a night attack and YAMATO pulled out of range. Her second war patrol was a bust.

In May 1944, Lieutenant Commander John K. Fyfe assumed command of Batfish. On her third war patrol, Batfish narrowly avoided being sunk when she crash-dived in waters off Honshu, Japan, charted at 400 feet only to hit a submerged volcanic peak at 240 feet. She was stuck for eight hours enduring 50 depth charges. Despite damage, Batfish continued the patrol, survived two more concerted attacks by the Japanese, and sank a trawler and a small escort as she was returning to Midway.

On her fourth war patrol, Batfish sighted the destroyer Samidare, which had run aground on Velasco Reef near Palau on 18 August 1944, along with a transport and a minesweeper (minesweeper No. 22) also aground on the reef. A variety of small craft and escorts were attempting to get Samidare off the reef, albeit unsuccessfully. After a first attempt to hit the transport was thwarted by heavy seas, Batfish tried again on 23 August, firing three torpedoes at the minesweeper, which blew apart. On 26 August, Batfish returned and hit Samidare with two torpedoes, making further attempts at salvage fruitless. Samidare broke in two and her stern section sank. Batfish observed as the Japanese destroyed Samidare’s forward section with demolition charges.

Although not as famous as the “lucky” Shigure, Samidare had an extraordinary battle record. She participated in the battles of Java Sea, Midway, Eastern Solomons, and Santa Cruz. In the Friday the 13th Battle off Guadalcanal (November 1942), Samidare assisted in sinking the destroyer Monssen (DD-436) and lightly damaging the light cruiser Helena (CL-50) before rescuing 207 survivors of the destroyer Yudachi. Two nights later, her torpedoes contributed to sinking the destroyers Benham (DD-397), Walke (DD-416), Preston (DD-379), and damaging Gwin (DD-433) before rescuing survivors of the battleship Kirishima. She then participated in the Japanese evacuation from Kiska, in the Aleutians, before returning to the Central Solomons for the Battle of Vella LaVella, where she torpedoed and severely damaged destroyer Selfridge (DD-357). At the Battle of Empress Augusta Bay, one of Samidare’s torpedoes badly damaged destroyer Foote (DD-511). Samidare then participated in the Battle of the Philippine Sea in June 1944 before her rendezvous with the reef and Batfish.

Batfish’s fifth war patrol was interrupted when her periscope jammed in the fully raised position. After resuming patrol, Batfish was mostly frustrated until 19 October, when she attacked a tanker. A full salvo of six torpedoes either missed or failed to detonate. Batfish fired another torpedo set at very shallow depth with still no result. As Batfish closed for a night surface gunfire attack, the tanker turned and attacked, as it turned out the “tanker” was a heavily armed “Q-ship” that fired on Batfish with guns and then dropped depth charges, which Batfish had to go below test depth to survive. On 4 November 1944, Batfish intercepted a 13-ship convoy that included a damaged heavy cruiser. As Batfish came to periscope depth in attack position on the heavy cruiser, she was nearly run down by a Japanese destroyer and had to emergency dive to avoid collision. Her subsequent attack against the receding convoy was unsuccessful.

Batfish departed Guam on 10 January 1945 for a patrol area in the South China Sea in the Gulf of Tonkin, where her frustration continued, as torpedo attacks were thwarted by bad weather, torpedoes that passed under the target, and a general paucity of targets. On 2 February, Batfish was ordered to change patrol areas to the vicinity of Babuyan and Calayan Islands, just north of Luzon.

By late January of 1945, due to Japanese kamikaze attacks (which by definition resulted in the loss of the aircraft) as well as destruction of Japanese aircraft on the ground due to continuing U.S carrier airstrikes, the Japanese had many more pilots than aircraft in the Philippines. As there was still a relatively ample number of new aircraft coming off the factory lines in Japan, and trained pilots were the long pole in the tent, the Japanese decided to extract as many pilots from the Philippines as possible before the Philippines fell.

On 31 January, Japanese Destroyer Division 43 (Ume, Kaede, and Shiokaze) departed Takao, Formosa, bound for the Aparri area of Luzon (where there were Japanese airfields) with a mission to evacuate Japanese pilots. At 1520, the three destroyers were attacked by U.S. Army Air Force B-25 medium bombers and P-38 long-range fighters. Ume was crippled by three direct bomb hits and the other two destroyers were damaged. Ume subsequently sank at 1810 with a loss of 77 crewmen. The Japanese aborted the surface evacuation mission, and decided to try to accomplish the evacuation via submarine. U.S. Ultra intelligence detected this plan immediately, which was why Batfish was sent to the area off northern Luzon. On 3 February, Batfish received additional guidance that the target was Japanese submarines engaged in an evacuation effort.

On 4 February 1945, Vice Admiral Shigeyoshi Miwa, Commander of Japanese Sixth Fleet (submarines), issued orders to submarines RO-115, RO-46, RO-112, and RO-113 to terminate their patrols and proceed to Takeo Formosa, where they were to offload deck-gun ammunition and reserve torpedoes in order prepare for the evacuation mission to retrieve stranded pilots from the Aparri area on Luzon. RO-46 would be the only one to complete her mission, picking up 46 airmen on 10 February 1945. (RO-46 would later be sunk on 2 May 1945 off Okinawa by USS Tulagi—CVE-72—aircraft.)

On 7 February, both RO-112 and RO-113 arrived at Takao to commence offload and preparations, and RO-46 departed. RO-115 never acknowledged the order to return to Takao (and never returned). The same day, RO-55 (not part of the evacuation operation) arrived at Aparri to offload ammunition. With no response from RO-115, it is possible that Miwa ordered RO-55 to substitute for RO-115 and pick up Japanese aircrewmen at Aparri. (Some accounts state that RO-55 was sunk on 31 January/1 February, but, according to Ultra, she communicated an up-echelon report on 2 February 1945, which would indicate she had not been sunk.)

At 2250 (2350 Tokyo time) on 9 February 1945, Batfish gained SJ radar contact at 11,000 yards on a target on course 310 degrees (i.e., heading away from Aparri toward Formosa). By 2331, Batfish had closed on the target and fired four torpedoes, all of which missed, and the submarine heard four end-of-run detonations. At 0001 on 10 February, Batfish had closed to 1,020 yards, and identified the contact as a Japanese “I-class” submarine on the surface (RO submarines are significantly smaller than I-boats, but in the dark this was an easy mistake). A minute later, Batfish fired four torpedoes. The first ran hot in the tube, the second hit the target, the third went through the brilliant red explosion that “lit up the whole sky,” while the fourth missed and detonated at the end of its run. Batfish heard distinct breaking-up sounds, so this was almost certainly a kill on a submarine.

Exactly which submarine was Batfish’s first kill has been the subject of many years of debate, with RO-115 usually considered as the most likely candidate, and with I-41 sometimes offered as a candidate. However, after extensive discussion with Anthony Tully of combined fleet.com, who has an unpublished book on the subject, I’m pretty well convinced that RO-55 makes the most sense. (USS Laurence C. Taylor—DE-415—was given credit for sinking I-41 with a hedgehog attack on 18 November 1944 east of Samar. It would have been highly unusual for RO-115 or any Japanese submarine not to acknowledge orders, or to ignore the orders to proceed to Takao before conducting the mission. There are several claimed submarine sinkings in the Philippines in December 1944 and January 1945 for which definitive proof of which submarine was sunk where is still unresolved, and it is possible that RO-115 was one of them). An intercept by Fleet Radio Unit Melbourne (FRUMEL) on 16 February 1944 confirmed that RO-112 and RO-113 had departed Takao on 9 and 10 February, but RO-115 had not returned as of then.

RO-112 departed Takao, Formosa on 9 February en route Batulinao, Luzon (near Aparri). At 1951 on 11 February, Batfish gained SJ radar contact at 8,000 yards, about the same time that the AN/APR-1 radar detector detected the Japanese submarine radar (with which many Japanese subs had been equipped by this time). At 2037, Batfish gained visual contact on a surfaced submarine at 1,300 yards on course 120–140 degrees, but the contact was lost when the submarine submerged. At 2105, Batfish’s sonar reported the submarine blowing tanks and, at 2106, the submarine surfaced. Batfish regained radar contact and detection of the submarine’s radar at a range of 8,650 yards. Over the next hour, Batfish closed the range and, at 2150, submerged to radar depth. At 2202 and at a range of 800 yards, Batfish fired four Mark 18 electric torpedoes from her bow tubes. The first torpedo hit, causing the Japanese submarine to blow apart and sink almost immediately.

On 12 February, RO-112 failed to arrive at its intended destination and was subsequently presumed lost with all 61 hands. (RO-112 had nearly been hit previously by Rasher [SS-269] one of the most successful boats of the war, on 19 February 1944. In May 1944, RO-112 had received warning derived from Japanese radio intelligence about USS England’s [DE-635] operations along the Japanese scouting line, and RO-112 had the good sense to change position before becoming one of the six submarines sunk by England.)

RO-113 departed Takao on 10 February 1945 en route Batulinao, Luzon. At 0215 on 13 February, Batfish gained SJ radar contact on a target at a range of 10,700 yards, on a southeasterly course between Calayan and Daupin Islands (i.e., on track from Formosa to Batulinao, Luzon). At 0241, the contact submerged, but resurfaced at 0310, and Batfish regained radar and APR contact at 9,800 yards. At 0412, Batfish submerged to radar depth. When the range reached 1,500 yards, Batfish fired three torpedoes from her stern tubes at 0448. At 0449, the first torpedo hit the submarine, sinking it so fast the other two torpedoes missed. On 14 February, RO-113 failed to arrive at Batulino, and was subsequently presumed lost with all 59 hands. (Of note, on 6 November 1944, RO-113 torpedoed and sank the British motor vessel Marion Moller in the Bay of Bengal, the last Allied ship to be sunk by a submarine in the Indian Ocean.)

Batfish was awarded a Presidential Unit Citation for her sixth war patrol, and is now a museum ship in Muskogee, Oklahoma (and getting her to Oklahoma is a story in itself.) Commander John K. Fyfe (USNA ’36) was awarded a Navy Cross:

…for extraordinary heroism and distinguished service in the line of his profession as Commanding Officer of USS BATFISH (SS-310) on the SIXTH War Patrol of that submarine during the period 30 December 1944 to 3 March 1945, in enemy controlled waters in the South China Sea south of Hong Kong, east of Hainan and in the Luzon Straits. Utilizing an important discovery concerning Japanese air search radar, Commander Fyfe expertly sought out and sank three large I-class enemy submarines in a period four days. In addition to his success in sinking these valuable enemy combatants units, he delivered a smashing gun attack which left an enemy landing barge floundering in the heavy seas in a mortally wounded condition. By his skillful evasive tactics, Commander Fyfe avoided determined enemy countermeasures. His gallant fighting spirit and unwavering devotion to duty were in keeping with the highest traditions of the United States Naval Service.

Fyfe was also awarded four Silver Stars during the war and retired as a rear admiral in 1957.

My great appreciation to Anthony Tully of combinedfleet.com for a very extensive “above and beyond” effort to try to help me untangle the conflicting reports of Japanese submarine losses during this period—and if I didn’t get it right, it’s my fault. Other sources include NHHC Dictionary of American Fighting Ships (DANFS), which probably doesn’t have it quite right either (nor does Samuel Eliot Morison for that matter), and combinedfleet.com for Japanese ships.