Historic Photo of the Month 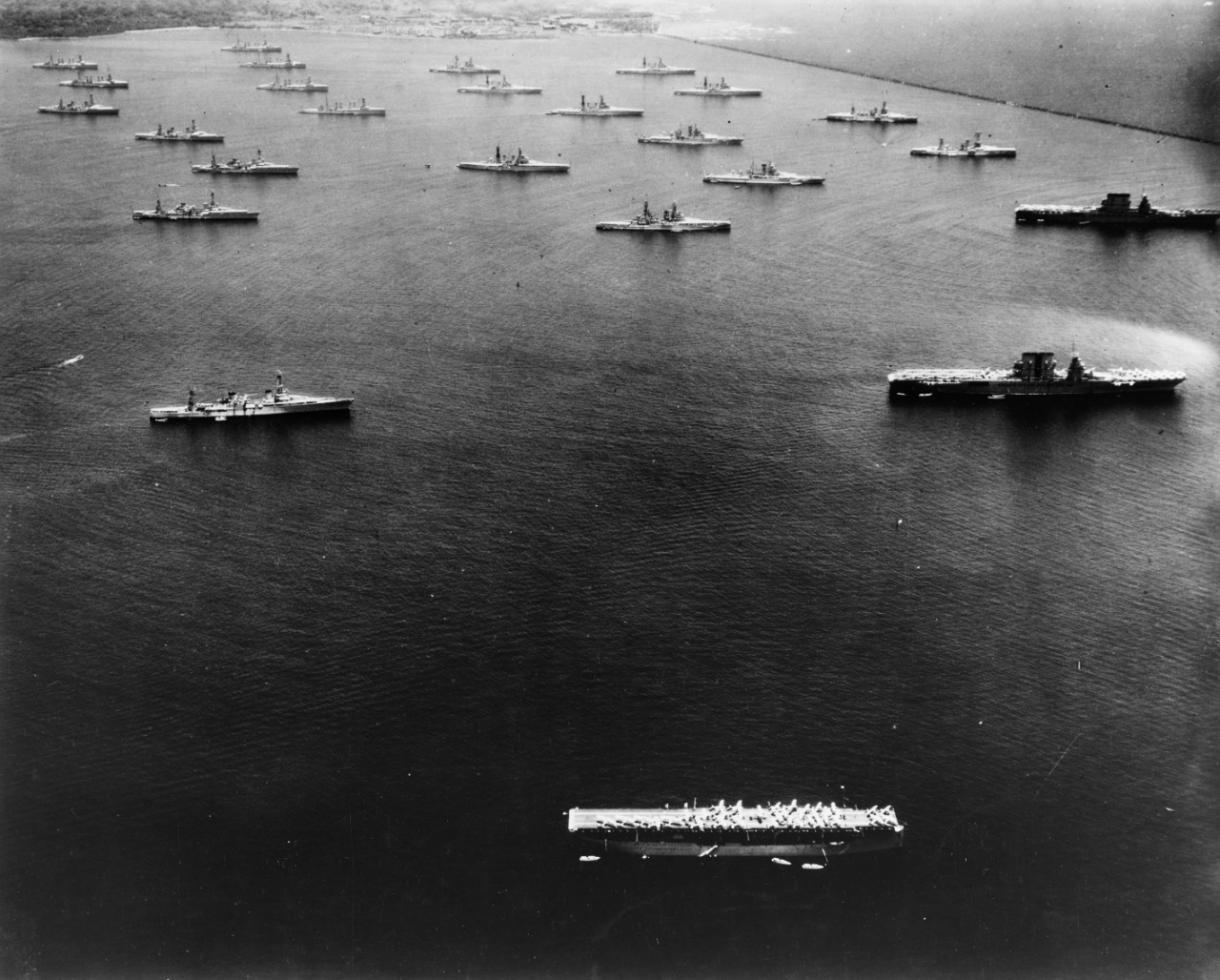 This H-gram covers the invasion of Kwajalein and Eniwetok atolls in the Marshall Islands and the U.S. carrier raid on the Japanese stronghold of Truk in February 1944.

Download a PDF of H-Gram 026 (4 MB). “Back issue” H-grams, enhanced with photos and charts, can be found here.

After the bloodbath on Tarawa in November 1943, U.S. Navy commanders and planners were seized by a sudden bout of retrospection and caution. Nimitz’s own planners, Spruance (Commander of Fifth Fleet), Turner (Commander, V Amphibious Force), and Marine Major General H. M. “Howling Mad” Smith, all argued for taking the islands of Wotje and Maloelap in the southern Marshalls before attempting to take the heavily defended islands of Kwajalein Atoll. (Wotje and Maloelap were strongly defended as well.) Even after Nimitz overruled them all, Spruance and Turner continued to push back until Nimitz, in his typical gentlemanly manner, offered to fire them if they didn’t want the mission. In the end, Nimitz’s audacious judgment would be vindicated.

The U.S. force that simultaneously invaded both ends of Kwajalein Atoll (and the largest lagoon in the world) was massive, including 54,000 U.S. Marine and U.S. Army assault troops, with gunfire support provided by seven pre–World War II battleships, six escort carriers, and numerous cruisers and destroyers (about 300 ships total). The landings had to be delayed from early January to the end of the month in order to amass enough assault transports to execute the landings with two divisions of Marines and soldiers. Additional air support and cover (and suppression of other Japanese bases in the Marshall Islands) was provided by six fleet carriers and six light carriers with over 700 aircraft, accompanied by seven modern fast battleships. Japanese aircraft were swept from the skies before the landings even took place and all Japanese submarines in the area were sunk. Not one U.S. ship was lost in the operation and only a few were damaged––not severely. Numerous tactical, technical, and technological improvements had been made, all examples of the rapid implementation of lessons learned from the Tarawa landings. The battles ashore were vicious but short. The approximately 9,000 Japanese defenders fought and died almost to the last man, not knowing that their high command had already given up on holding the outermost ring of islands (including the Marshalls) and, therefore, that no reinforcement or support could get through. U.S. Marine and Army battle deaths were less than half of those on Tarawa, about 400.

With the capture of Kwajalein (and the undefended Majuro Atoll) the U.S. had acquired the bases necessary to sustain an offensive drive across the central Pacific while bypassing and strangling several other fortified Japanese-held islands in the Marshalls. The Japanese, however, also learned lessons from Kwajalein––in particular, the futility of trying to defend on the beach in the face of overwhelming U.S. Navy firepower. The Japanese would compensate and adapt, and future landings would prove far more costly for the U.S. as a result. (For more an Operation Flintlock and the invasion of Kwajalein, please see attachment H-Gram 026-1.)

The invasion of Eniwetok Atoll, the western-most island in the Marshalls (360 miles west of Kwajalein) was an opportunistic rush job, executed with an 8,000-man U.S. Marine and Army “reserve force” that had not been necessary to use for the landings on Kwajalein. Against a much smaller force of Japanese, the Battle of Eniwetok would cost almost as many U.S. lives as Kwajalein. A major factor was that the compressed timeline did not allow the extensive and detailed level of reconnaissance and intelligence preparation that had preceded the Kwajalein landings. On the other hand, delay of the landings would have enabled the Japanese to continue to improve their fortification effort. The U.S. knew there were about 800 Japanese on the island of Engebi. (On account of its airfield, Engebi was the primary objective of the Eniwetok invasion.) The big surprise was that two islands thought by the U.S. to have been empty (Eniwetok and Parry) were actually occupied by 2,000 troops of the veteran Japanese First Amphibious Brigade, which had begun to arrive there on 4 January 1944.

The U.S. Navy support to the landings on Eniwetok was leaner than at Kwajalein and included three pre–World War II battleships, three escort carriers, three heavy cruisers, as well as other escorts, amphibious ships, and auxiliaries. Additional air support was provided by one of TF 58’s four carrier task groups, TG 58.4, consisting of the carrier Saratoga (CV-3) and two light carriers. Nevertheless, no Japanese air, surface or subsurface assets opposed the landings at Eniwetok Atoll, as the Japanese high command had already given up on it. The massive U.S. carrier strike on the major Japanese base at Truk was timed to ensure no air or naval forces from Truk could respond to the landings at Eniwetok (see also H-Gram 026-2).

After some initial confusion, the first landings at Engebi by two battalions of U.S. Marines went reasonably well, and the fight was over relatively quickly. Only then, however, did U.S. intelligence personnel sifting through captured documents discover just how many Japanese were on the two other islands––islands that the battleship Tennessee (BB-43) and ten troop transports had unwittingly passed within yards on entering the lagoon, while the Japanese “played possum.” This discovery necessitated a change of plans from simultaneous to sequential assault on Eniwetok and Parry islands.

The assault by two Army battalions on Eniwetok Island initially became bogged down, and the third Marine reserve battalion from Engebi was committed to taking the island. As a result, the mission to assault Parry Island was given to the two Marine battalions that had taken Engebi. The Japanese on Eniwetok and Parry put up a tough fight. However, they had not expected the landings to come from inside the lagoon rather than from the ocean side––an assumption they had also made in Kwajalein. In the end, almost all the 3,500 Japanese defenders on the islands were killed and only about 100 taken alive. U.S. losses were about 400 killed or missing. The capture of Eniwetok prevented the Japanese from using the airfield on Engebi to attack U.S. forces in the Marshalls, and Eniwetok would be used as a forward logistics base for the invasion of the Marianas Islands planned for June 1944. (For more on Operation Catchpole and the invasion of Eniwetok, please see attachment H-Gram 026-2.)

At dawn on 17 February 1944, 72 F6F Hellcats from five U.S. fleet aircraft carriers caught the Japanese by surprise at their major fleet forward base at Truk Island, piercing the aura of impregnability of the island, which until then had been known somewhat exaggeratedly as the “Gibraltar of the Pacific.” Over the next day and a half, more than 1,200 strike sorties by more than 500 aircraft from nine aircraft carriers (five fleet carriers and four light carriers) pummeled the island in a near continuous stream of raids, flagrantly ignoring traditional “hit-and-run” carrier doctrine.

By the time the raids on Truk were over, which included the first carrier-launched night strike in U.S. Navy history, between 250 and 275 Japanese aircraft had been shot down or destroyed on the ground and 80 percent of the supplies on Truk had been destroyed, including 17,000 tons of fuel. More than 4,500 Japanese had been killed. Japanese ship losses included two light cruisers, four destroyers, three auxiliary cruisers, six other naval auxiliaries, three small warships, and 32 transports or freighters (including five tankers).  U.S. losses included one fleet carrier damaged by a torpedo in an aerial night strike, one battleship slightly damaged, 25 aircraft lost, and 40 dead. Several Japanese ships were sunk by U.S. submarines and surface ships, including a light cruiser sunk by the battleships Iowa (BB-61) and New Jersey (BB-62), with Commander of the Fifth Fleet Vice Admiral Raymond Spruance on board and in tactical control. The strikes would have been even more catastrophic to the Japanese had the commander of the Combined Fleet, Admiral Mineichi Koga, not ordered his ships out of Truk just days before the strike. The Japanese would not use Truk again as a major anchorage for the remainder of the war, and in March 1944, Admiral Nimitz made the decision that Truk could be bypassed and left to “wither on the vine.” The raid was a huge blow to Japanese morale and a huge boost to the confidence of U.S. naval aviators, who, in addition to implementing numerous innovations during the raids, proved that U.S. carrier forces could stand and fight against large concentrations of shore-based air power and prevail. (For more on Operation Hailstone please see attachment H-Gram 026-3.)