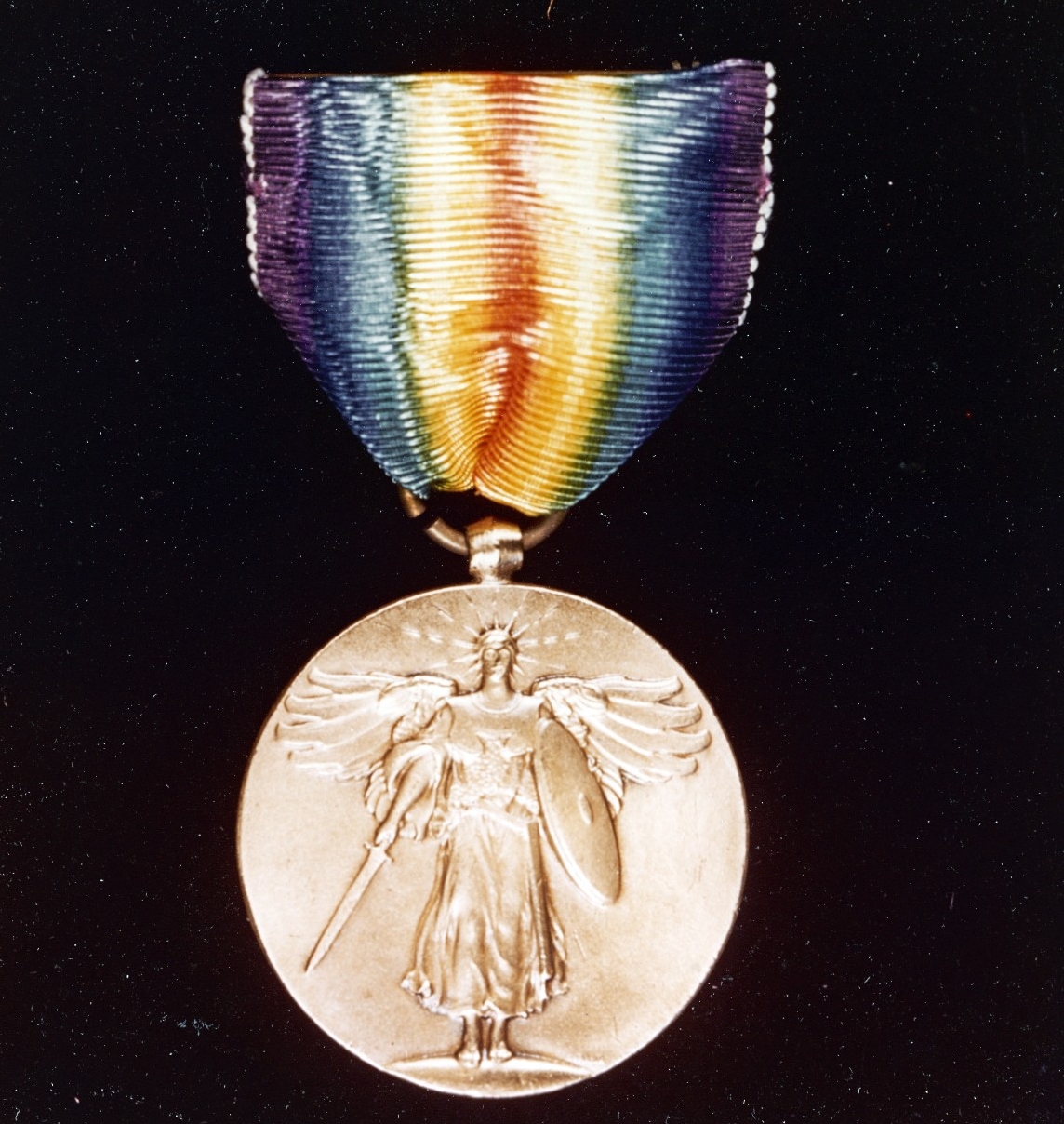 World War I Victory Medal: Obverse and ribbon of the medal awarded to all personnel of the armed forces for honorable service during World War I. Bronze clasps added to the medal's ribbon (bronze stars when worn on a ribbon bar) denoted specific campaigns and actions (80-G-K-13412).

I tried to get this out by 11 November, the 100th Anniversary of the World War I Armistice, but my day job kept getting in the way!

Back issues of H-grams (enhanced by photos and charts) can be accessed here.

The Contribution of the U.S. Navy During World War I

U.S. Navy Personnel Awarded the Medal of Honor During World War I

At 1057:30 on 11 November 1918, Battery 4 of the U.S. Navy Railway Gun Unit fired a 14-inch shell timed to hit a German target over 20 miles away seconds before the cease-fire went into effect at 1100that same day, thus bringing an end to the bloodiest, costly, and destructive war in human history, to that point. Between the time the Armistice was signed—around 0500 that morning—and when the cease-fire went into effect at 1100, over 3,000 soldiers on both sides were killed and over 8,000 wounded as bitter fighting continued right up until the end. The last soldier to fall in action before the cease-fire was U.S. Army Private Henry Gunther, killed at 1059 while single-handedly charging a German checkpoint despite German efforts to wave him away.

The exact number of people killed and wounded in World War 1 will never be known, particularly those who were killed on the Eastern Front before Czarist Russia collapsed and the Bolshevik government dropped out of the war. Estimates vary widely depending on the source, but somewhere on the order of nine to ten million military personnel died during the war and another seven to eight million civilians perished. France, Germany, Russia, and the Austro-Hungarian Empire all lost more than a million soldiers, and the United Kingdom lost almost a million (more than a million if Commonwealth countries are added). The United States suffered 53,402 combat deaths, the vast majority of them U.S. Army personnel in the final three months of the war; in terms of casualties per month, this was the bloodiest period in U.S. military history. Of the U.S. battle deaths, the U.S. Marine Corps suffered 2,461 killed (and 9,520 wounded) and the U.S. Navy suffered 431 killed in action and 819 wounded in action. The U.S. Coast Guard, which came under the U.S. Navy during the war, lost over 121 men in action, thereby suffering proportionately the greatest loss of any U.S. Service. The U.S. Navy would lose an armored cruiser (to a submarine-laid mine), a destroyer (to a submarine torpedo), and a number of armed transports and smaller vessels to enemy action during the war. Of the 178 German submarines lost during the conflict, only one was confirmed sunk by the U.S. Navy, although numerous others were damaged or, more importantly, driven away from convoys of troops and critical war materiel by U.S. destroyers, submarine chasers, and, late in the war, aircraft.

The most significant contribution of the U.S. Navy during World War I was the escort and transport (with significant British Royal Navy assistance) of two million U.S. soldiers to France, the great majority in the last six months of the war, with almost no loss to German submarines. By July 1918, U.S. troops were arriving in France at a rate of about 10,000 per day, roughly half in U.S. shipping and half in Allied shipping. Although the U.S. Army had significant success on the battlefield (and after four years of war the immense sacrifice of the French and British armies had bled the Germans white), it was the German High Command's realization that there was nothing they could do to stem the tide of an overwhelming number of U.S. troops that caused the Germans to sue for an armistice. In short, the Germans did the math and knew they could not win. Although the German army had been pushed back in 1918, neither it nor the German navy had been decisively defeated yet. This led to a sense amongst German soldiers (including Corporal Adolph Hitler) of being "stabbed in the back" by their own government, which would be the genesis for the events that led to the rise of Nazi Germany and World War II (along with a host of other contributing factors). (For more on the contribution of the U.S. Navy in World War I, please see attachment H-023-1)

Navy Medals of Honor in World War I

Of 21 Medals of Honor awarded to U.S. Navy personnel during World War One, five were awarded for direct combat against the enemy at sea or the result of combat at sea:

(For more on U.S. Navy personnel who were awarded the Medal of Honor in World War 1 please see attachment H-023-2)

Previous H-grams on World War I

H-Gram 019/H-019-5: “Black Sunday” and the Battle of Orleans–World War I Comes to American Waters