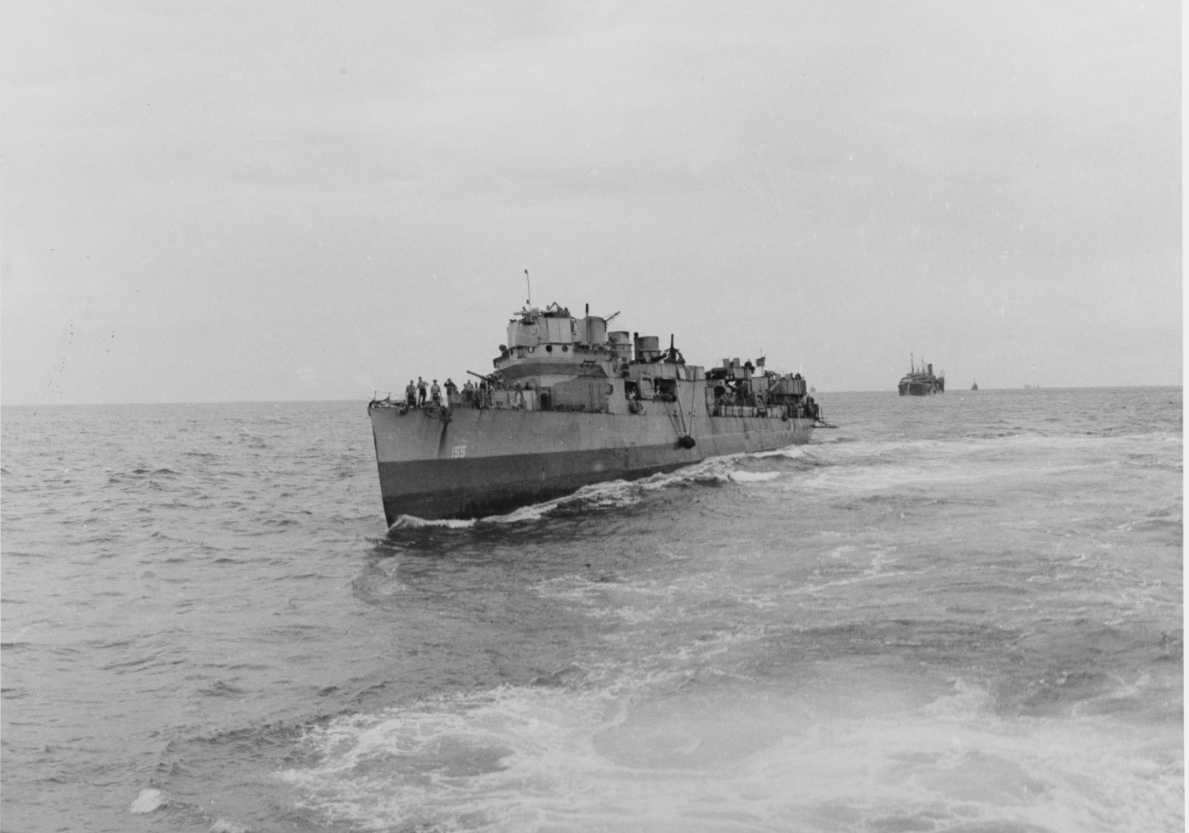 The famous British Admiral Lord Nelson reputedly said, “A ship’s a fool that fights a fort,” so one wonders about the wisdom of using a ship to break into a heavily defended harbor.  But, at 0428 on 8 November 1942, the heavily modified World War I–vintage destroyer, USS Bernadou (DD-153,) penetrated the harbor of Safi, the only port (besides Casablanca itself) in Morocco with facilities to off-load medium tanks, which would be needed for the assault on Casablanca. With her funnels and masts cut down very low to make her more stealthy, Bernadou’s mission of bringing 197 U.S. Army soldiers trained in night raider tactics into Safi to prevent Vichy French sabotage of the critical port infrastructure depended to a large degree on surprise for success. Bernadou’s skipper, Dublin-born Lieutenant Commander (and future rear admiral) Robert E. Braddy, could tell by the high-speed traffic converging on the port that the French had been alerted (having presumably failed a challenge signal from a French light a few minutes earlier was also another indicator). However, although the French expected “something,” they didn’t expect a destroyer to come barreling right into the port. In the darkness and confusion the French did not open fire until Bernadou was already in the harbor, taking the estroyer under fire from multiple directions, with 155-mm, 75-mm, and machine guns, despite Bernadou’s firing of an American flag flare. At 0428, the supporting destroyer, USS Mervine (DD-489), gave the radio call “batter up,” indicating the French were resisting. She immediately received the “play ball” response from Rear Admiral L. A. Davidson, giving U.S. ships permission to open fire (the first such call of Operation Torch), which also caused the battleship USS New York (BB-34) and light cruiser USS Philadelphia (CL-41) to commence firing on French positions. Although French shells were hitting all around Bernadou, her guns proved quicker and more accurate than those of the French, silencing the artillery with 3-inch rounds and the machine guns with grenade launchers. Bernadou literally fought a fort, silencing a 75-mm battery in the Old Portuguese Fort. With her primary planned berth fouled, Bernadou beached herself at the head of the harbor and Army troops went ashore and fanned out through the port.

USS Cole (DD-155), under the command of Lieutenant Commander (and future rear admiral) George G. Palmer, and modified in the same manner as Bernadou, was supposed to be following immediately behind Bernadou and leading a wave of Army assault craft, but nearly ran head-on into the breakwater since she was erroneously navigating off a light in a house window instead of the lighthouse (which was out). As it turned out, the delay was providential, as the army craft had gotten lost, too, and had Cole led them in at the peak of French resistance, casualties would have been higher. Nevertheless, the Cole brought her 197 embarked troops into the harbor along with the accompanying wave of assault craft and suppressed renewed French resistance. Despite the at-times intense French resistance, only ten U.S. Army troops were killed and damage to Bernadou and Cole was minimal. French casualties numbered 27 killed and 44 wounded. Although Bernadou was high on the rocks, both she and Cole would continue to serve as convoy escorts throughout the war. In this case, the sheer audacity of the plan led to success, and both destroyers were awarded a Presidential Unit Citation; the commanding officers, Braddy and Palmer, were awarded the Navy Cross.

North of Casablanca, U.S. Army troops trying to take Port Lyautey and the airfield were bogged down by determined resistance from 3,000 to 4,000 French troops and well-placed artillery (84 U.S. troops would be killed in this fight). French aircraft flying from the airfield periodically strafed the U.S. beachhead and engaged in dogfights with U.S. Navy aircraft (and gave a creditable account of themselves). As a result, the USS Dallas (DD-199), commanded by Lieutenant Commander (and future rear admiral) Robert Brodie, Jr., was given orders to execute a highly daring mission to go ten miles up the narrow Wadi Sebou (river) in daylight on 10 November and land 75 Army raiders directly onto the airfield. Like the Bernadou and Cole, the Dallas had been modified for exactly such a mission. Earlier on 8 November, Dallas had tried to break through the boom blocking the river mouth and had been driven off by intense French fire.

Before dawn on 10 November, a net-cutting party on rubber boats, led by naval reservist Ensign Mark Starkweather, succeeded in cutting the boom while under heavy French fire; every one of the party was wounded. Starkweather would be awarded a Navy Cross. However, first light would reveal that the breech was in shoal water where Dallas couldn’t go. Nevertheless, Dallas rammed and cut through the boom herself (and you thought this was a just a scene from the movie Sand Pebbles) and proceeded up river against an ebb tide under heavy French fire.  Dallas was piloted by a Free French civilian, René Malevergne, who had been imprisoned by the Vichy French for anti-Nazi activity, but had escaped to England; Malevergne knew the river well. Despite this, Dallas ran aground multiple times in the narrow, winding, shallow river. In one case, a French near-miss lifted Dallas’s stern out of the mud in which she was stuck, enabling her to resume progress. Squeezing between French ships that had been deliberately sunk to block the river, and with French fire reportedly turning the river to “froth” (French artillery had difficulty adjusting to her speed), Dallas resumed upriver, returning fire along the way. At one point, an “over” from Dallas took out an unseen anti-tank gun that was holding up a column of U.S. tanks. A SOC seaplane, launched from the light cruiser USS Savannah (CL-42), dropped a depth charge and silenced a threatening artillery battery. (Depth charges, with their fuses set to instantaneous, were discovered to be highly effective anti-tank weapons during Operation Torch.) At some points, Dallas literally plowed a trench through the soft mud until she reached her destination at the airfield, and, except for her bottom, virtually unscathed. Dallas’s embarked Army troops quickly captured the airfield. By 1030 that morning, U.S. Army Air Force P-40 fighters, flown off one of the U.S. escort carriers, were operating from Lyautey airfield. For his audacity, Lieutenant Commander Brodie would be awarded the Navy Cross. René Malevergne would also be the first foreign civilian to be awarded a Navy Cross. Dallas received a Presidential Unit Citation.

The Operation Torch landings in Algeria were under British command, so I have not discussed them much in this H-gram.  However, I am including the operation to take Oran harbor as an example of the very fine line between audacious and foolhardy. The HMS Walney and HMS Hartland were both former U.S. Coast Guard Lake-class cutters that had been transferred to the United Kingdom as part of Lend-Lease. They had been modified in similar ways to the Bernadou, Cole, and Dallas above. The ships were commanded and crewed by the British, but their mission was to take about 400 U.S. Army raiders and a 33-man U.S. Navy detachment (five officers, 22 Sailors, and seven Marines under the command of Lieutenant Commander G. D. Dickey) into the heavily defended Vichy French port of Oran. The Navy detachment’s mission was to prevent French ships from being scuttled and blocking the harbor. Although they were now British ships, both ships flew oversized U.S. ensigns. The reason was because after France surrendered to Germany in June 1940, the Royal Navy had preemptively attacked the French fleet at Mers el-Kebir, Algeria, to keep it from falling into German hands, sinking and damaging many French ships and killing almost 1,300 French sailors. The British correctly assumed the French might still be sore about it, and hoped incorrectly that the U.S. flag might get a better reception. U.S. Rear Admiral A. C. Bennett (Commander, Advance Group, Amphibious Forces Atlantic Fleet) objected to the plan, arguing that if the French resisted, then the port was too heavily defended for success, and if the French did not resist, then the mission was unnecessary. Commander of U.S. Naval Forces in Europe (and former CNO) Admiral Harold Stark agreed with Bennett, but the British admiral in charge of the Torch landings in Algeria, Admiral Sir Andrew Cunningham, believed that with the element of surprise the operation could be successful, a decision he later admitted was a mistake.

Almost everything went wrong from the beginning. French searchlights quickly picked up the two ships, and shore batteries opened up. Unlike Safi and Port Lyautey, Oran had a number of French navy destroyers and submarines in port, and their crews reacted very quickly and effectively. By the time Walney and Hartland (with the U.S. Navy detachment embarked) broke through the booms into the narrow harbor after 0300 on 8 November, they were being hammered mercilessly from all sides by French warships. After she unsuccessfully attempted to ram an underway French destroyer, the bridge of Walney was completely shot away as she drifted to the head of the harbor before sinking. At one point, the French destroyer Typhon, still pier-side, poured salvo after salvo of 4.7-inch fire into Hartland from a range of 100 feet. Fires below drove U.S. Army troops topside, where they were slaughtered by point-blank machine-gun fire before Hartland sank. Casualties were very heavy. Of 393 U.S. Army raiders embarked, 189 were killed and 157 wounded. A total of 113 British crewmen were killed and 86 wounded. The U.S. Navy detachment came out comparatively well with five killed (including two Marines) and seven wounded, and was credited with saving the lives of many army soldiers, who were unfamiliar with life jackets and water survival. The survivors were all taken prisoner by the French and held until the Vichy French in Algeria switched sides a few days later.

Back to H-Gram 013 Overview