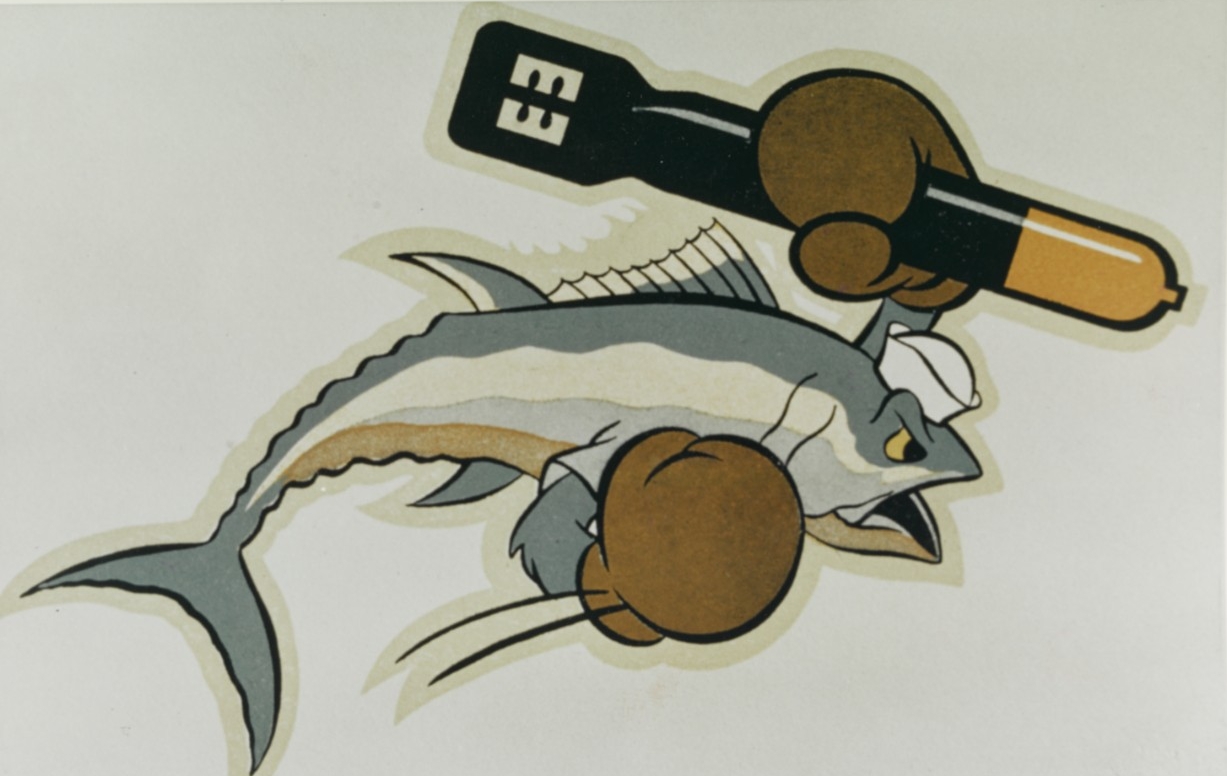 USS Tunny (SS-282) was awarded the first of two Presidential Unit Citations for her second war patrol—from 24 March to 23 April 1943. Up until that point in the war, the U.S. submarine force had largely under-performed. Two primary reasons were the difficulty of finding targets in the vast expanse of the Pacific Ocean and malfunctioning torpedoes; although, in some cases, lack of experience and aggressiveness in some submarine skippers was determined to be a factor. However, in Lieutenant Commander John A. Scott, Tunny had a truly aggressive and capable skipper. Tunny also had another advantage in that by early 1943, U.S. Navy codebreakers at Fleet Radio Unit Pacific (FRUPAC) had broken—and were copying with great regularity—the Japanese “Maru" code. Although not as sophisticated as the Japanese JN-25 series navy general operating codes, the Maru code nevertheless contained extremely valuable intelligence about Japanese ship movements. Lieutenant Commander Jasper Holmes had the lead for FRUPAC for sanitizing and passing communications intelligence-derived data to Commander, Submarine Force Pacific (COMSUBPAC) in a way that would not compromise the sensitive source. The ad-hoc process actually worked very well. As U.S. submarines were increasingly provided with the sanitized intelligence, their opportunities to sink Japanese ships also increased. The faulty torpedoes, however, were still a problem. (In H-Gram 008/H-008-3 “Torpedo Versus Torpedo,” I discussed these problems in detail.)

Tunny departed Pearl Harbor on 18 March 1943 for her second war patrol. After a brief stop at Midway Island she commenced transit on March 24 toward Japanese-held Wake Island. While conducting reconnaissance around Wake Island, Tunny sank the Japanese cargo ship Suwa Maru, firing two torpedoes for one hit. Tunny then survived being depth-charged and bombed twice. She moved on from Wake, and based on intelligence, located and sank the cargo ship Toyo Maru on April 2—firing three torpedoes for one hit. Lieutenant Commander Scott had a good shot at the cargo ship, but not the escorting destroyer 1,000 yards behind. He boldly sank the Toyo Maru anyway. Tunny then survived two sustained depth charge attacks. On 4 April, Tunny sank the cargo ship Kosei Maru—two for two on torpedoes. She then endured yet another sustained depth charge attack from escorting destroyers.

Lieutenant Commander Scott was among those submarine skippers who had come to believe, based on hard experience, that war-shot torpedoes ran deeper than the depth for which they were actually set. Since U.S. torpedoes were intended to pass under a ship and explode via magnetic influence, this was a serious problem. Although the Bureau of Ordnance continued to place the blame for poor results on the skippers rather than the torpedoes, some skippers like Scott were compensating by setting their torpedoes to run shallow. For the first part of this war patrol, Scott was having decent success with this technique, having sunk three ships in three attempts. What Scott didn’t know for sure—although he and other skippers suspected—was that the magnetic exploders were also unreliable. After that problem was discovered and fixed—by de-activating the magnetic exploder—it was learned that the contact exploders were unreliable too.

On April 8, the Intelligence analysts and code-breakers at FRUPAC decrypted a Maru code message that indicated a convoy including three aircraft carriers was due to arrive at the Japanese stronghold of Truk Island on early morning of April 10. Tunny was vectored to intercept. Scott planned to make a night surface attack, with his decks awash, making use of Tunny’s new “SJ” radar, which the Japanese had no means to detect. As described in the introduction, Scott’s initial set-up was textbook perfect, and although it was disrupted by the untimely appearance of three motor torpedo boats which forced him to attack submerged, it was still a great tactical set up. All four of the stern torpedoes fired at the lead smaller carrier were heard to explode, and three of the six fired at the larger carrier were heard to explode. Yet another sustained Japanese counter-attack by depth charges kept Tunny from getting visual or other confirmation of the hits.

Commander, Submarine Force Pacific would describe Scott’s attack as “an illustrious example of professional competence and military aggressiveness.” And it was—except for the torpedoes. In this case, setting them to run shallow backfired. The carriers were larger than the previous targets Scott had attacked, and the combination of shallow depth and larger magnetic signature caused the magnetic exploders to detonate prematurely—approximately 50 yards from their targets. These malfunctions were confirmed by subsequent intercept and decryption of Japanese communications that identified the small escort carrier Taiyo as having suffered minor damage as a result of the premature detonation of torpedoes. Analysis of this failure was a major factor in Admiral Nimitz’ decision to order the deactivation of the magnetic exploders in June 1943.

Tunny’s attack on the three carriers off Truk is also a great case study in how the “fog of war” becomes the “fog of history.” The identity of the three carriers is still in doubt, with the exception of the Taiyo. Accounts that identify the carriers by name state they were Junyo, Hiyo, and Taiyo. This, however, would not match Scott’s description of one large and two small carriers. Junyo and Hiyo were sisters, and although not full-size fleet carriers, were much larger than Taiyo. The small escort carrier Taiyo—and her sisters Chuyo and Unyo—proved to be a bad design, and the Japanese used them as aircraft-transport ferries rather than operational aircraft carriers. The three generally made runs between Japan and Truk ferrying aircraft. Japanese records show that Taiyo departed Yokosuka, Japan on April 4, in company with her sister Chuyo and escorts en route to Truk via Saipan. A U.S. submarine reported sighting the Junyo and Hiyo at Saipan at the same time Japanese records show Taiyo and Chuyo there. This misidentification made its way into official reports, and later histories. Japanese records also confirm that Taiyo and Unyo were present during Tunny’s attack, and would account for Scott’s sighting of two small carriers. The Junyo and Hiyo, as well as the Fleet Carrier Zuikaku and the smaller Zuiho, were at or near Truk at the time of the attack after having flown off their air groups to Rabaul and the Bougainville area of the northern Solomon to participate in Operation I-GO (see H-018-2). However, Japanese records do not indicate which, if any, of those other carriers were present during Tunny’s attack. On the other hand, the records of Zuikaku, Zuiho, Hiyo, Taiyo, and Unyo all eventually wound up on the bottom of the ocean. Only Junyo survived the war—sort of—as a badly damaged derelict in port, having been hit by three torpedoes from a “wolf pack” of three U.S. submarines. Unyo would be sunk by USS Sailfish (SS-192) on 4 December 1943, also near Truk. The true identity of the “large” carrier may never be known.

Tunny’s adventure was not yet over. On April 11, Tunny sighted the Japanese submarine I-9 on the surface near Truk. Tunny fired her three remaining forward torpedoes at the I-9; however, the Japanese submarine maneuvered to avoid them and counter-fired. Two torpedoes narrowly missed Tunny. She was then unsuccessful in trying to maneuver to sink a Japanese destroyer with her last torpedoes. The Japanese destroyer attacked first, and Tunny was pounded yet again by depth charges, sustaining minor damage. She then concluded her patrol at Midway, and would receive a Presidential Unit Citation for her second war patrol. Lieutenant Commander Scott was awarded a Navy Cross.

Tunny would survive nine war patrols, and the fifth, also under the command of Scott, would earn her a second Presidential Unit Citation and a second Navy Cross for Scott. Among the highlights was Tunny’s duel with the Japanese submarine I-42. Although details are sketchy, it appears both submarines were aware of the other, and both maneuvered for about 90 minutes at relatively close range (under 2,000 yards) trying to gain a firing advantage over the other. Tunny won, and sank the I-42 with two torpedoes. Later in the patrol, Tunny fired six torpedoes at the Japanese super-battleship Musashi. The torpedoes passed under an escorting destroyer, which alertly signaled the Musashi, which was able to avoid all but one torpedo, which hit in her bow. The destroyer than counter-attacked down the torpedo wakes and subjected Tunny to yet another beating. The damage didn’t really faze the huge battleship, but she was out of action for a month for repairs.

Tunny continued her distinguished service after World War II. She was re-commissioned during the Korean War but did not serve there. Instead she was extensively modernized and converted to carry the Regulus land-attack surface-to-surface missile (with hangar for two missiles, and a launcher.) Tunny was re-designated as SSG-282. The drawback to the Regulus was that the submarine had to be surfaced to fire the missile. In 1966, Tunny was converted yet again into a troop-carrying submarine, with a deck shelter for small amphibious vehicles, and re-designated APSS-282. Tunny then conducted special operations and supported Marine amphibious operations along the coast of Vietnam. Tunny finally met her end as an exercise target, by a torpedo fired by the USS Volador (SS-490) in 1970.

(Sources include the same as H-018-2, plus: Pig Boats: The True Story of the Fighting Submariners of WW II by Theodore Roscoe and Silent Victory by Clair Blair, Jr., as well as Morison’s series. The website combinedfleet.com has extensive data about Imperial Japanese Navy Operations.)

Back to H-Gram 018 Overview