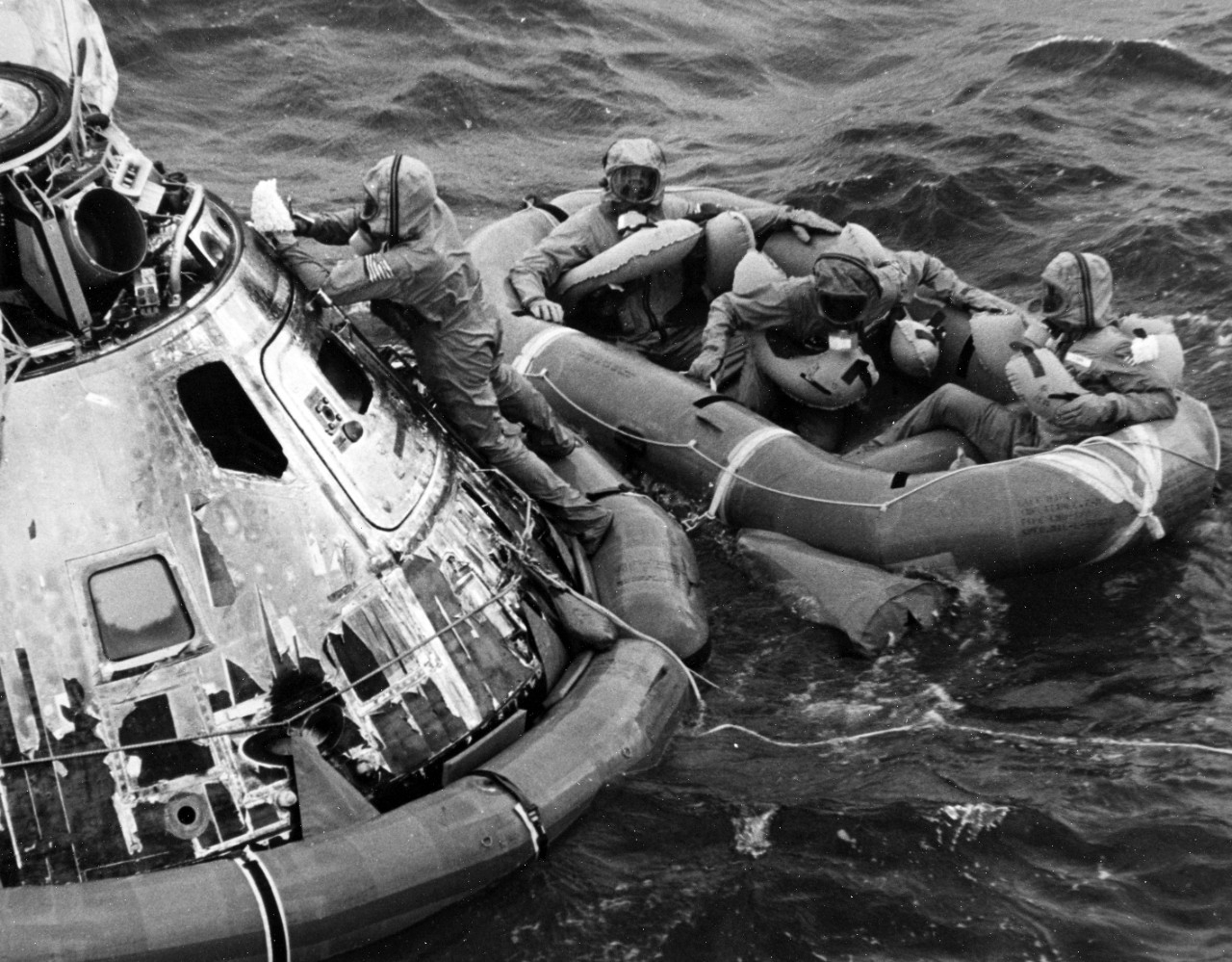 Download a PDF of H-Gram 033 (5 MB). Back issues of H-grams may be found here. As always, you are welcome and encouraged to share H-grams so that our Navy personnel can better understand the legacy of honor, sacrifice, and valor that they are charged to uphold.

Based on a Japanese message that was intercepted and decoded by Fleet Radio Unit Pacific (FRUPAC), a U.S. Navy wolf pack of three submarines (“Wilkins’ Wildcats”) was vectored to intercept Japanese submarine I-29 as she transited the Luzon Strait between the Philippines and Formosa, heading toward Japan. On the evening of 26 July 1944, the USS Sawfish (SS-276), commanded by Commander Alan B. Banister, sighted I-29 on the surface, and fired four torpedoes. Commander Takakazu Kinashi desperately tried to maneuver I-29 to avoid the torpedoes, but it was too late. Three of the torpedoes struck home, sinking I-29 almost instantly; only one of the 106 crew and passengers survived.

Kinashi would receive the rare honor of a double posthumous promotion to rear admiral, as he was Japan’s greatest submarine hero. On 15 September 1942, while in command of I-19, Kinashi had fired a spread of six torpedoes that sank the carrier USS Wasp (CV-7), put the new fast battleship North Carolina (BB-55) out of action for several months, and damaged the destroyer O’Brien (DD-415) such that she sank a month later. Kinashi had only recently received the German Iron Cross 2nd Class from Adolph Hitler in Berlin (for sinking the Wasp), having taken I-29 all the way to Lorient in German-occupied France. Kinashi was attempting to become only the second Japanese submarine to complete a round-trip Yanagi (“Willow”) mission to transfer high technology from Germany to Japan. I-29 went down with a cargo that included an HWK 509A rocket motor (used to power the German Me-163 Komet rocket-powered interceptor fighter) and a Jumo 004B jet engine (used to power the German Me-262 jet fighter). The loss of these set back Japanese efforts to produce their own rocket- and jet-powered aircraft such that only a few test flights took place before the war ended.

The only Japanese submarine (of five) to complete a round-trip Yanagi mission was the I-8 in April 1943. On 2 July 1944, while conducting a standard patrol in the Indian Ocean, the I-8 sank the unescorted U.S. Liberty ship SS Jean Nicolet, during which the captain and crew of I-8 committed possibly the worst atrocity against U.S. Sailors (merchant seamen, U.S. Navy armed guard, and U.S. Army and Navy passengers) of the entire war. One hundred survivors of Jean Nicolet were forced aboard I-8, where they were beaten with iron bars, tortured, and murdered one by one by bayonet until a plane was detected and I-8 submerged with U.S. crewmen still tied together on deck. Twenty-three Americans somehow managed to survive; three others had been taken below as prisoners, one of whom survived the war in a Japanese prison, unbeknownst to anyone else. Having been presumed dead, Francis J. O’Gara would be the only living person to have a Liberty ship named after him.

Two Japanese submarines on Yanagi and related missions were actually sunk in the Atlantic, both of them (RO-501 and I-52) by the USS Bogue (CVE-9) hunter-killer task group (TG 22.2) in May and June 1944. For more on the Yanagi missions and I-8’s atrocity, please see attachment H-033-1.

Commander Lawson P. “Red” Ramage would be the first submarine officer in World War II to be awarded a Medal of Honor that wasn’t posthumous, for a legendary night surface attack on a Japanese convoy while in command of USS Parche (SS-384) on 31 July 1944. Following presentation of the Medal of Honor, Ramage created a certificate for his crew that stated, “The Captain wishes to emphasize the fact that the Medal of Honor was accepted from the President of the United States as the Nation’s tribute to a fighting ship and her courageous crew. He feels that every officer and man whose loyal cooperation and able assistance contributed to the success of the Parche has an equal share in this award, which he holds in trust for you. With great pride and respect, Sincerely L. P. Ramage.” That was the kind of leader “Red” Ramage was. In a wild nighttime close-quarters melee in the midst of a Japanese convoy, Parche sank and damaged several ships, including sending the troopship Yoshino Maru to the bottom with the loss of 2,495 troops and crew. This, in turn, contributed to the devastating losses of troops suffered by the Japanese in 1944 due to U.S. submarine attacks that would ultimately virtually paralyze the Japanese army. For more on Parche’s heroic action, please see attachment H-033-2. 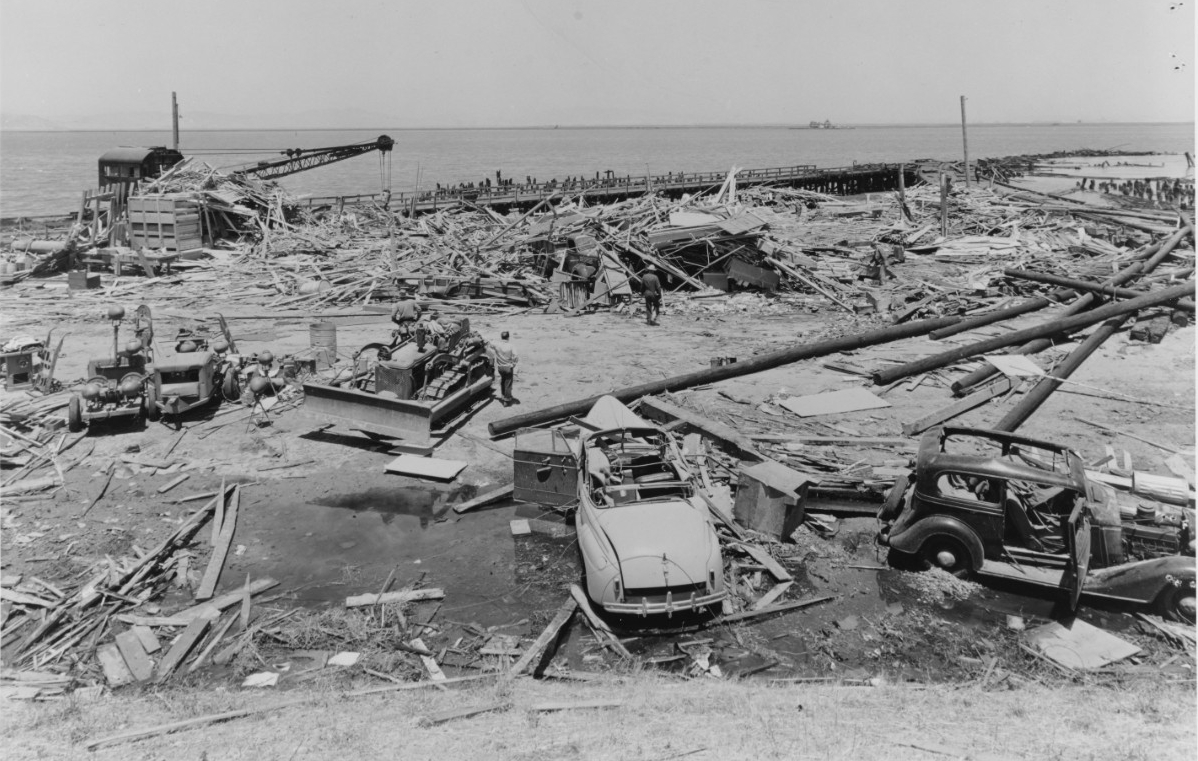 Damage resulting from the 17 July 1944 ammunition explosion at Port Chicago Naval Magazine, California. This view looks north toward Suisun Bay, showing the wreckage of Building A-7 (Joiner Shop) in the center and the munitions pier beyond. Note bulldozer and damaged automobiles in the foreground, railway crane at left, and scattered pilings (NH 96823).

On 17 July 1944, a massive explosion on Pier No. 1 at the U.S. Naval Magazine, Port Chicago, California (on Suisun Bay, northeast of San Francisco Bay), obliterated the  cargo ship SS E. A. Bryan (which had about 4,600 tons of explosives on board) at the pier, tore apart and sank the SS Quinault Victory on the other side of the pier, and destroyed a U.S. Coast Guard fire barge. The huge blast killed 320 people and injured 390. The dead included 241 Navy personnel, one Marine, five Coast Guardsmen (on the fire barge), and 73 civilians. Most of the Navy personnel killed were enlisted African-American stevedores (202), as were 233 of the wounded.

The Navy board of inquiry was unable to determine a cause of the blast, yet exonerated the white officers of any blame (there were no black officers then), implying that somehow the accident was the fault of the black enlisted stevedores. With the cause unknown, and no new safety procedures implemented, the black stevedores were ordered to resume ammunition loading. Several hundred (initially 328, then 258) of them balked in what came to be known as the “Port Chicago Mutiny,” and eventually 50 of the black Sailors were convicted of incitement to mutiny at court-martial (initially receiving sentences of 15 years hard labor, which were significantly reduced on appeal and with the end of the war). Serious questions about the fairness of the trial were raised at the time (some by NAACP lawyer Thurgood Marshall, who went on to become the first black U.S. Supreme Court Justice) and the entire proceeding remains controversial to this day.

The Port Chicago disaster did spur U.S. Navy leadership (led by CNO Admiral Earnest J. King) to accelerate the integration of blacks into more and more jobs in the Navy, including as officers, and, along with the Pearl Harbor West Loch disaster in May 1944, it resulted in massive overhaul of procedures and training for ammunition handling. For more on the Port Chicago disaster and mutiny, please see “The Port Chicago Disaster, 17 July 1944: Leadership Lessons Learned” by NHHC historian Dr. Regina Akers and the NHHC “Port Chicago Naval Magazine Explosion” overview. 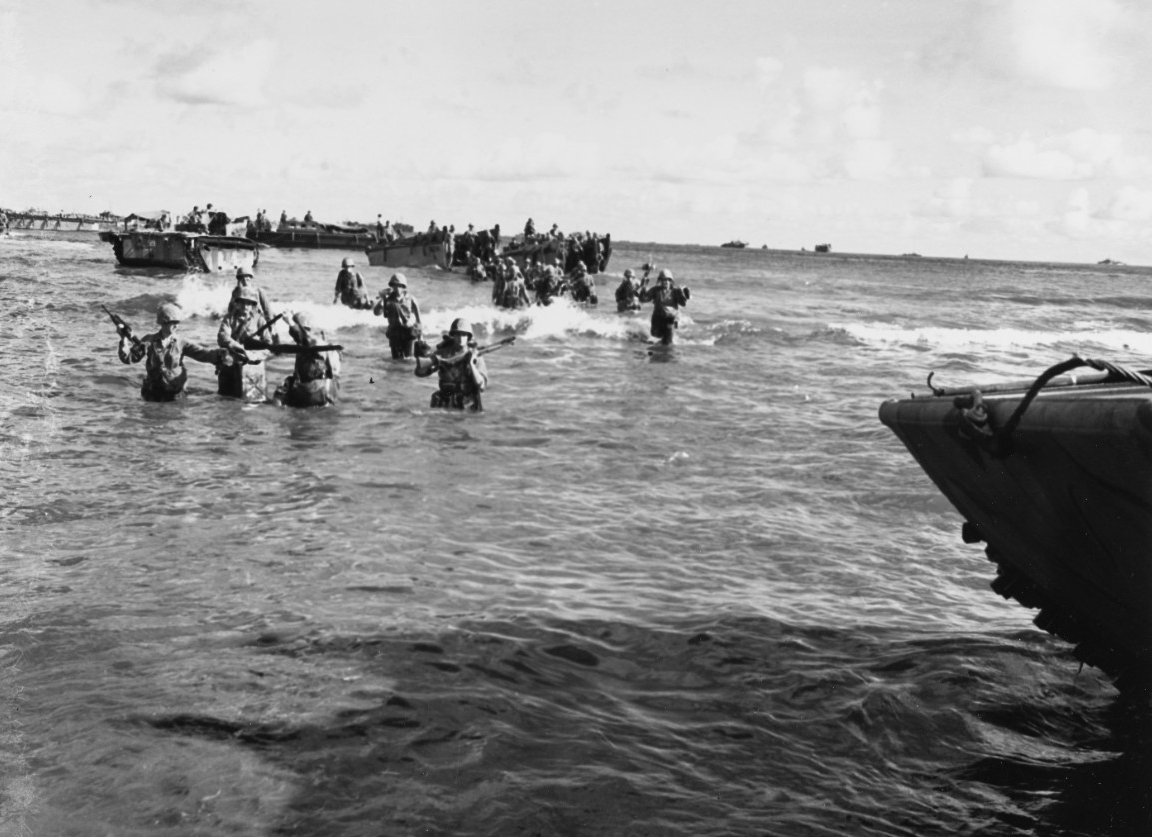 Marine Lieutenant General Holland M. “Howling Mad” Smith, commander of V Amphibious Corps, described the U.S. landings on Tinian as “the perfect amphibious operation in the Pacific War.” Close, but not quite: A Japanese shore battery hit the battleship USS Colorado (BB-45) with 22 6-inch rounds in a few minutes, killing 50 men and wounding almost 200, while also hitting the destroyer Norman Scott (DD-690) six times, killing 22 (including the commanding officer) and wounding 50. No Japanese shore battery inflicted greater casualties in the entire war. Yet Norman Scott continued to fire on targets. Colorado stood firm and took out the offending shore battery, with assistance from other U.S. ships that attacked rather than retreated in the face of the enemy fire. This occurred during a deception effort to keep the Japanese from shifting forces to where the actual audacious high-risk landings were taking place on confined beaches on 24 July 1944. In the assault and subsequent operations, 41,000 Marines wiped out the 8,000 Japanese defenders almost to the last man, at a cost of 326 killed and about 1,600 wounded. Even before the island was declared secure on 1 August 1944, 15,000 U.S. Navy Seabees were already turning it into a massive airfield with six 6,900-foot runways from which B-29 Superfortress bombers would commence bombing Japan in November 1944. Hundreds of thousands of Japanese civilians would pay with their lives for their government’s folly. For more on the landings on Tinian, please see attachment H-033-3.

On 5 September 1951, Navy pilot Ensign Neil Armstrong was flying an armed reconnaissance mission west of Wonson, North Korea, when his F9F-2 Panther probably hit a cable strung between hilltops as an aerial “booby trap,” shearing off six feet of his right wing. Although Armstrong was able to nurse the plane back over water, he was forced to eject, and the wind blew his parachute back over land, fortunately in territory held by U.S. forces, where he was rescued and returned to the carrier USS Essex (CVA-9). Seventeen years later on 20 July 1968, Neil Armstrong, as mission commander of Apollo II, would become the first man to set foot on the moon, with the immortal (and possibly garbled) words, “That’s one small step for [a] man, one giant leap for mankind.” On 24 July, Apollo 11 splashed down in the Pacific and Armstrong, “Buzz” Aldrin, and Michael Collins were recovered by Essex’s sister, USS Hornet (CVS-12). For more on Neil Armstrong’s U.S. Navy service and the important role of the U.S. Navy in America’s manned space flight program, please see attachment H-033-4.

The mines didn’t know the war was over. On 12 July 1919, the minesweeper USS Richard Bulkeley was sweeping one of the over 56,000 mines laid by the U.S. Navy in the North Sea mine barrage in 1918, when one of the Mark 6 mines caught in her sweep gear exploded. The commanding officer of Richard Bulkeley, Commander Frank Ragan King, would be awarded a posthumous Navy Distinguished Service Medal (the second highest award for valor at the time) for his heroic actions in trying to save his crew in the seven minutes it took the ship to sink, including giving away his own life preserver to a stunned junior Sailor. Six other crewmen were lost with the ship and twelve were rescued. For more on the North Sea mine barrage and the sinking of Richard Bulkeley, please see attachment H-033-5.