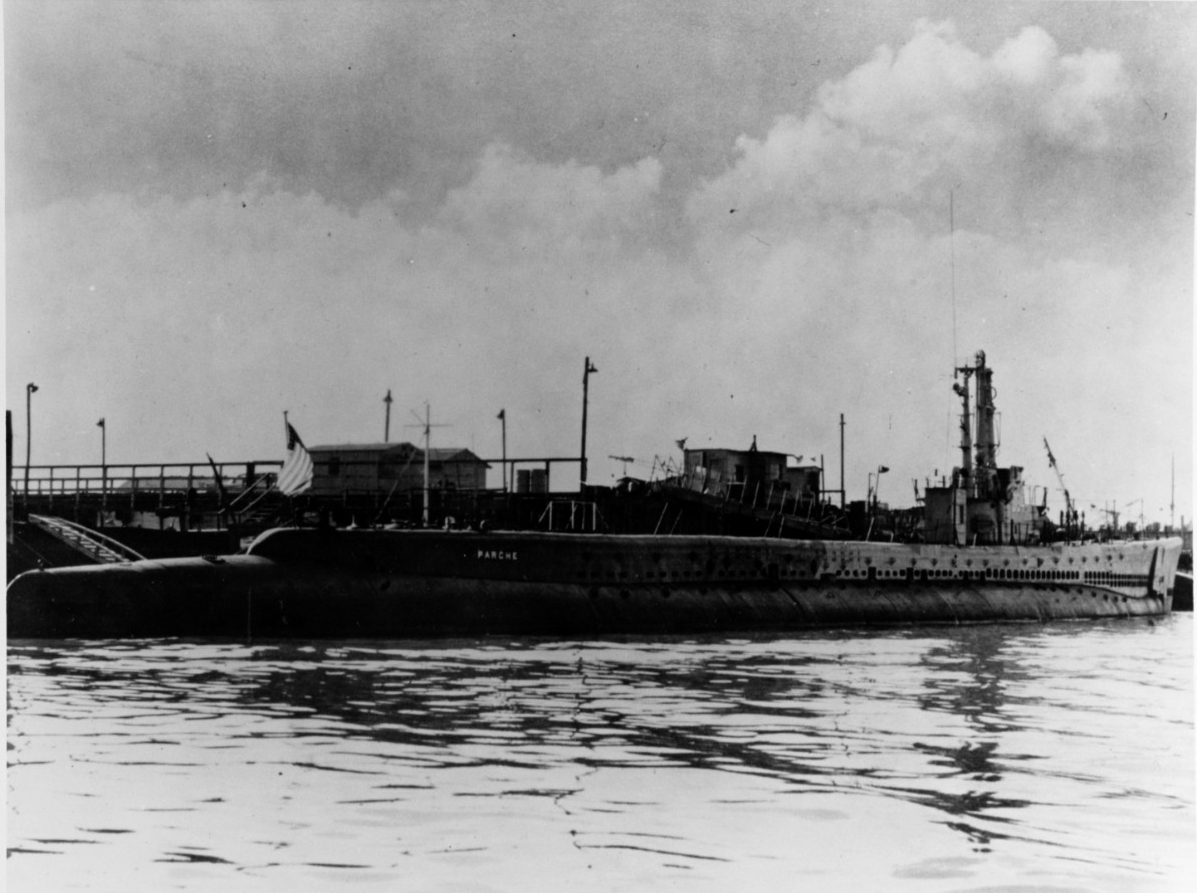 A small, gorgeously colored butterfly fish, known for its uncanny ability to swim in and around coral heads and reefs. The fish can find its way through the most intricate passages by swimming upside down or on its side.

On 29 March 1944 the submarine slipped out of Pearl Harbor with Tinosa (SS-283) and Bang (SS-385) for her first war patrol. After topping off at Midway, the three reached the sea lanes south of Formosa 16 April. On 29 April Bang reported a large convoy 50 miles away, and the wolf pack attacked, Parche getting one hit.

Tinosa reported a seven-ship convoy on the morning of 3 May and Parche headed north at full speed to intercept. An hour after midnight Parche was in position and scored three torpedo hits on the leading ship and two hits on the second freighter, sinking both. Parche scored two hits on the third freighter, which settled by the stern and began to list to port. Post-war records credited the trio of submarines with five sinkings and 30,542 tons, Parche getting credit for Taiyoku Maru and Shoryu Maru. Parche returned to Midway 23 May 1944, after making a thorough photo reconnaissance of military installations on the island of Ishi Gaki Jima.

Parche's second patrol was again south of Formosa, forming with Hammerhead and Steelhead, a coordinated attack group. Parche went to sea 17 June, following her refit. A week later she sighted and sank a patrol vessel with gunfire. On 4 July a Japanese cruiser and destroyer bombarded and depth charged Parche.

Parche sighted a convoy 29 July and, cooperating with Steelhead, closed in, sinking 4,471 ton cargo ship Manko Maru and 10,238-ton tanker Koei Maru. During this daring night surface action Parche barely avoided being rammed by one ship. Parche collaborated with Steelhead (SS-280) in sinking an 8,990 ton transport. Steelhead sank two other ships, a transport and a cargo vessel. Another tanker and a cargo ship were damaged. For this action Parche received the Presidential Unit Citation. On 1 August the sub departed for Saipan where she moored 5 August, arriving Pearl Harbor 16 August.

On her third war patrol, 10 September to 2 December, one of the longest of the war, Parche did not encounter any targets.

After a refit, the ship got underway 30 December for rotating patrol in the Nansei Shoto. She discovered a freighter and a tanker at anchor in Naze Ko 19 January, firing six bow tubes at the tanker for five distinct hits and four stern tubes at the freighter for two possible hits. On 7 February Parche sighted and sank the 984-ton Okinoyama Maru. Fueling at Midway 16 February, the sub continued to Pearl Harbor, where she arrived 20 February.

Japanese shipping, decimated by continual submarine and air attacks, was becoming increasingly difficult to find. When Parche left Pearl Harbor 19 March 1945, she headed directly for the east coast of Honshu, Japan. Parche sank escorting 615-ton Minesweeper No. 3 off Kobe Zaki 9 April. On 11 April Parche made a gun attack, sinking a small freighter of about 800 tons. She torpedoed another small vessel the next day. On 13 April Parche sank a fishing trawler. Two hours later she again opened fire on a small observation boat, leaving it blazing stem to stern. Two Japanese planes caused her to dive, leaving all her guns loose and much of her ammunition exposed. A heavy explosion shook her on the way down, but inflicted no damage.

On 22 April Parche sighted three small tankers in column, proceeding north along the coast south of Okama Saki. Parche fired three torpedoes at the second tanker and then shifted to the third, which was left down by the stern covered with a cloud of smoke. The sub sailed for Midway, arriving 30 April.

Parche got underway 25 May for her sixth patrol, the last of World War II, joining the "Lifeguard League" south of Honshu. She stayed on station off Honshu until 18 June, ready to pick up any aviators who might be forced down. No rescues were necessary, and on the 18th she proceeded to Tsugara Strait.

Her first torpedo contact came 21 June when she sighted a gunboat rounding Shiriya Saki. The gunboat was soon joined by a sub chaser and then by a freighter. Picking the freighter as the best target, Parche fired four torpedoes from her forward tubes for one hit, which threw up a veil of dense white smoke. Expecting counter-measures, the sub went under, accompanied by the breaking-up noises of freighter Hizen Maru.

Parche attacked three luggers escorted by a small flat vessel on the afternoon of the next day, and sank two. She sank several trawlers by gunfire on 23 June. Two days later she sighted three large ships and six escorts headed north along the coast, one of the most tempting convoys seen for some months in Japanese home waters. After Parche's attack the escorts shook the sub up considerably with depth charges four and a half hours, before she managed to work away and resume her patrol, leaving an ex-Gunboat sunk and another ship badly damaged.

After another round of life guard duty for the carrier planes of Task Force 38, on 17 July, Parche rendezvoused with Cero to take aboard three fliers, and set course for Midway, arriving 23 July, and mooring Pearl Harbor 28 July.

A Navy yard overhaul kept the ship in port until after the Japanese surrender. In 1946 she was assigned to operation "Crossroads," as a target ship for the atomic bomb tests at Bikini. Arriving in Bikini lagoon 1 June, Parche survived both the air burst and the underwater burst, coming through relatively undamaged. After decontamination, she proceeded to Mare Island. She was then assigned to Naval Reserve training duty in Oakland, Calif. She decommissioned, and in March 1947 was moved to Alameda, Calif. On 1 December 1962 her classification was changed to GASS-384. In late 1969, Parche was replaced as NRT submarine by Charr (AGSS-328). 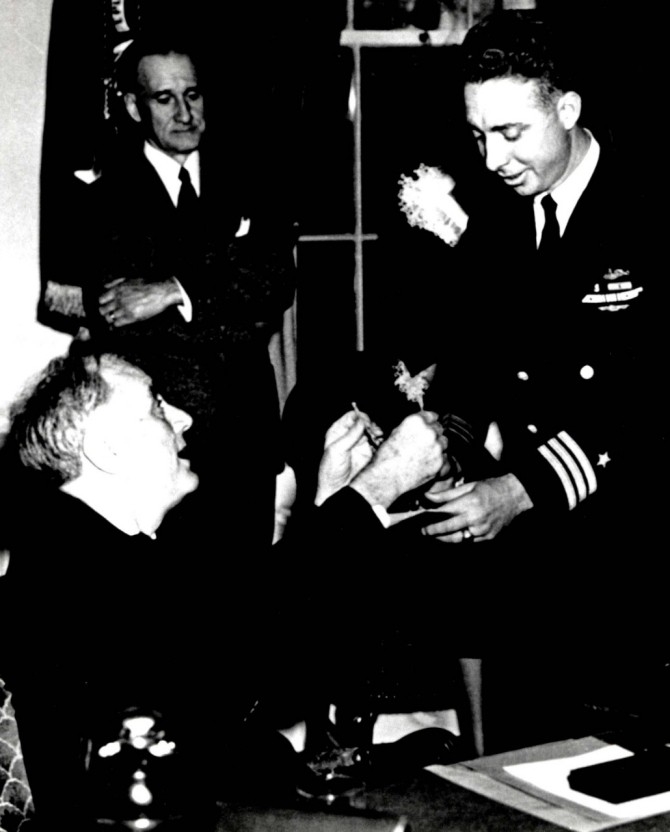 Commander Lawson P. Ramage receives the Medal of Honor from President Franklin D. Roosevelt, 10 January 1945. Ramage received the nation's highest honor for "conspicuous gallantry" while serving as commanding officer of Parche (SS-384) during a predawn attack on a Japanese convoy off Takao, Taiwan on 31 July 1944.