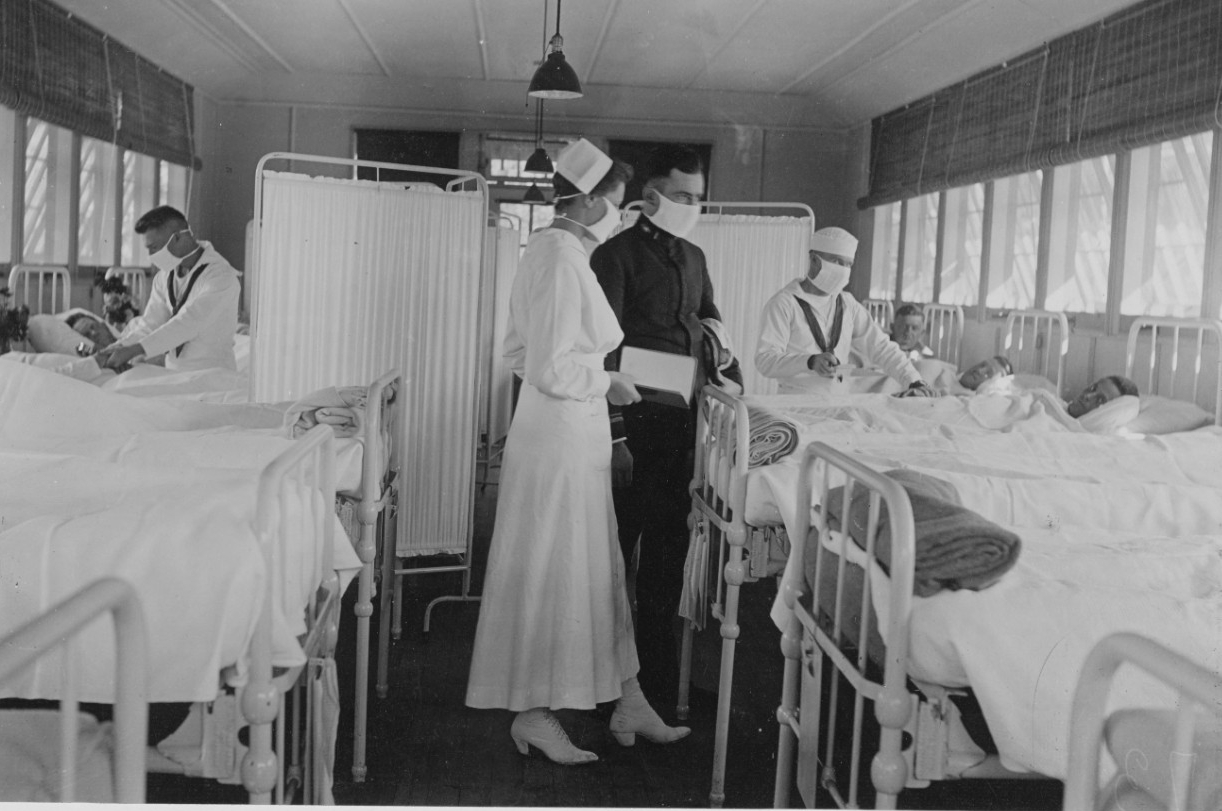 During World War I, 431 U.S. Navy personnel were killed as a result of enemy action and 819 were wounded. However, 5,027 died as a result of the Spanish influenza epidemic between the fall of 1918 and spring of 1919, more deaths than at Pearl Harbor, Guadalcanal, or Okinawa.

The misnamed “Spanish influenza” was one of the worst (and possibly the worst) outbreaks of deadly disease in human history. Although the bubonic plague (“Black Death”) in the 1300s killed a greater number of those infected, and a greater proportion of populations infected (up to one third of the world’s population) the high end of estimated deaths from the Spanish influenza (100 million) exceeds those for the bubonic plague in the 1300s. The Spanish influenza killed in a year and a half what the bubonic plague killed in a century. At least 25 million people in the United States were infected (one quarter of the population) and more than 700,000 people died in the United States alone, mostly during September to November 1918. This was more than the combined wartime U.S. combatant deaths in both world wars, Korea, and Vietnam combined. The impact on U.S. society was profound—the later term, “Lost Generation,” did not apply exclusively to those who died in battle during the war.

The origin of the virus has not been conclusively identified. There have been numerous studies that exceed my medical knowledge; some indicate the origin was hog farms in Kansas, others in the trenches of France, and still others suggest the Far East. What is certain is that it did not originate in Spain. The Spanish population suffered extensively from the outbreak, and Spain was one of the earliest areas hit. Because Spain was neutral and did not have wartime censorship in place, word of the extensive outbreak there spread very quickly, giving rise to the name. Other combatant nations, including the United States, deliberately tried to downplay and cover up the extent of the epidemic, so as not to give aid and comfort to the enemy. This also contributed significantly to slow and inadequate responses, resulting in an abundance of preventable deaths. For example, in September 1918, authorities in Philadelphia knew the virus had arrived in the city, but went ahead anyway with a planned major war bond-drive parade—partly because they had been kept in the dark about the extent of the new lethal variant due to wartime censorship—which resulted in a rapid spread of the virus (and deaths) throughout the city’s population.

The spread of the disease was very complex, but there were two primary “waves” in the United States and Western Europe. The first wave in the spring of 1918 was comparatively mild, resulting in relatively few deaths, similar to a normal flu. However, one warning sign that made this virus different was those who suffered the most were between ages 15–40 years, rather than the typically affected elderly and very young populations. The first recorded instance of this significant flu outbreak in the U.S. Navy was aboard the cruiser USS Minneapolis (C-13) moored at the Philadelphia Navy Yard in January 1918. Many of the crew fell ill, but there were no fatalities. Although the initial spread of the flu was widespread, the relatively low mortality rate lulled medical, political, and military authorities.

The second, and far more lethal, wave of the disease was detected in multiple areas in July 1918. It picked up steam in August, with a major outbreak amongst French troops. By mid-September, the disease was a full-blown pandemic that encircled the globe, even to the remote Pacific islands. The number of deaths peaked in the United States and Western Europe between October and November 1918. In 1918, medical professionals had a good understanding of how epidemics spread and how to stop them—quarantine being the most effective solution—but there was no treatment or cure, as there were no antibiotics then. Medicines were tried, such as anti-malarial quinine, with no effect. Some medical professionals quickly realized that minimizing the amount of medication delivered orally improved survivability. As in the first wave, the second wave mostly affected young, healthy people, and it was that population that made up the vast majority of deaths. In the U.S. Army and Navy, recruit and training camps were particularly hard hit due to the crowding of soldiers and sailors from all over the country.

Victims of the Spanish flu would basically drown in their own fluids, with the end accompanied by projectile nose bleeds. Other than trying to keep victims comfortable and hydrated, there was little that could be done. It is now believed that stronger immune systems were actually a disadvantage in this influenza; the harder the immune system tried to fight the virus, the more damage was done to internal organs, particularly the lungs. Recent studies suggest the majority of deaths were not caused by the virus itself, but by secondary bacteriologic infections. Many of the best medical professionals had volunteered or been drafted into the armed forces, so in many respects soldiers and Sailors got better care than the civilians at home. Deprived of timely and accurate information due to censorship, and inadequate medical care, the civilian population in the United States resorted to an “every man for himself approach.” Streets were deserted. Public life came to a halt. Calls for volunteers to help with the sick went unanswered as people holed up in their homes. In some cases, entire families died not only from the virus, but from the lack of care (water/food) for those who might otherwise have survived. Some strains of distrust in the federal government that exist today can be traced to this period when many of those who survived felt they had been misled and abandoned.

The spread and effects of the virus were just plain freaky. For example, German soldiers on the Western Front were severely affected—contributing to their multiple defeats in the last months of the war—whereas British soldiers got the flu, but for the most part were not killed by it. British civilians in Britain on the other hand suffered severely with high mortality rates. American troops on troop transports crossing the Atlantic suffered high mortality, whereas the Navy crews of those same ships did not. Over 36,000 U.S. Army troops died from influenza before they even got to France, with well in excess of 12,000 dying on the troop transports—compared to almost none killed by German U-boats. In France alone, 12,000 U.S. Army troops were killed by the disease.

Within the U.S. Navy, sailors in Boston and the Great Lakes were the earliest to get hit hard—before the flu spread to other installations. By the beginning of September, 31,000 sailors were sick and 1,100 had already died. Most of the sailors who died from the outbreak did so ashore, stateside. By the end of 1918, 4,158 sailors had died. Those on the battleships operating with the British Grand Fleet suffered many sick, but relatively few deaths, possibly due to better medical care. Aboard the battleship USS Arkansas (BB-33), 1,200 of the 1,500 crewmen became ill, and more than half the crews of the Texas (BB-35), Wyoming (BB-32), and New York (BB-34) were at some point unable to do their duty. Fewer than 30 in the battleship squadron died—14 or 15 of them on the flagship New York. The ports of Brest, France, and Queenstown and Bantry Bay, Ireland were hard hit, at times incapacitating many crewmen who were aboard U.S. destroyers. Sailors on the three U.S. battleships at Bantry Bay—Utah (BB-31), Oklahoma (BB-37), and Nevada (BB-36)—suffered numerous illnesses, and 11 aboard Nevada died. Even before the flu hit, liberty had been severely curtailed for the battleship crews following confrontations and fights between U.S. sailors and Irish townsmen. The Irish in that area were strongly anti-British since Ireland was not yet independent of Britain at that time. However, the liberty restrictions didn’t stop the contagion from reaching the ships.

The worst outbreak of all U.S. Navy ships occurred aboard the armored cruiser USS Pittsburgh (ACR-4) while in port in Rio de Janeiro, Brazil. Pittsburgh had formerly been named Pennsylvania—when she served as the platform for Eugene Ely’s first shipboard landing by an aircraft in 1911. By 1918, Pittsburgh was the flagship for the U.S. South Atlantic Squadron, guarding against German surface raider activity, under the command of Rear Admiral William B. Caperton. The skipper of Pittsburgh was Captain George “Blackjack” Bradshaw. The crew of Pittsburgh referred to the ship as “USS Madhouse” and “Blackjack Bradshaw’s floating squirrel cage,” perhaps suggesting not the best of command climates to begin with. Rear Admiral Caperton‘s opinion of the captain was questionable. Not related to influenza, but in January 1918, a sailor aboard Pittsburgh had been murdered (somewhat bizarrely as a result of trading sex for candy) and five men accused of his murder and several witnesses had been transferred to the collier USS Cyclops to be taken to the United States for trial. They were aboard when the Cyclops disappeared without a trace in March 1918—leading to one unlikely theory to explain her disappearance.

The flu reached Rio on 17 September aboard a merchant ship from Africa, which was not quarantined, and within a month 30,000 people in the city would be dead. Initially the flu seemed to be of the benign variety and Captain Bradshaw permitted working parties to go ashore and continued normal liberty, although it was apparent by 4 October that the lethal strain was in the city. The first case aboard the ship occurred 7 October and by the 11th there were 418 cases. The first death, Seaman E.L. Williams, occurred on 13 October. Within a short time, 663 of Pittsburgh ’s crew would come down with the flu and 58 would die. Rear Admiral Caperton’s account makes for particularly gruesome reading, as the extent of the illness quickly outstripped the ability of the ship to care for them or to deal with the bodies. Eventually, 41 of the crew would be buried ashore. Caperton’s account stated, “The conditions in the cemetery beggared description. Eight hundred bodies in all states of decomposition, and lying about in the cemetery, were awaiting burial. Thousands of buzzards swarmed overhead.” In other passages he describes the dead lying in the streets of the city untended, and bodies stacked like cordwood. Not surprisingly, the Pittsburgh was not capable of getting underway or performing any missions for over a month. Replacements were sent, and Pittsburgh did not return to the United States until March 1919. The bodies were eventually repatriated to the United States on the light cruiser Richmond (CL-9). A monument erected in their honor in the cemetery in 1920 is still there.

True heroes of the pandemic were the 1,500 nurses of the U.S. Navy Nurse Corps, which had been officially established in 1908 and was led during World War 1 by Superintendent Lenah H. Sutcliffe Higbee (namesake of the Gearing-class destroyer DD-806 and Arleigh-Burke destroyer DDG-123). Although there was no effective medicine, good care made a difference in survivability, but put the caregiver at great risk given how contagious the virus was. Sources conflict on how many nurses died from influenza during the war, but it was at least ten. Three nurses would be awarded the Navy Cross, posthumously, for their unwavering dedication in tending to the sick, at the cost of their own lives. Marie Louise Hidell, Lillian M. Murphy, and Edna E. Place, would receive the award in 1920—at the same time as Lenah Sutcliffe Higbee—which made Higbee the first living woman to receive the Navy Cross. Hospital Apprentice First Class Carey F. Miller would also be awarded a posthumous Navy Cross for his actions in caring for the sick during the pandemic.

The pandemic would continue at a slower pace into 1919, and in some places until 1920. By the time it was over, the official tally of U.S. Navy officers and Sailors who died from the Spanish influenza was 5,027. Of note, the U.S. Navy kept better records of the epidemic than just about any other organization in the world.