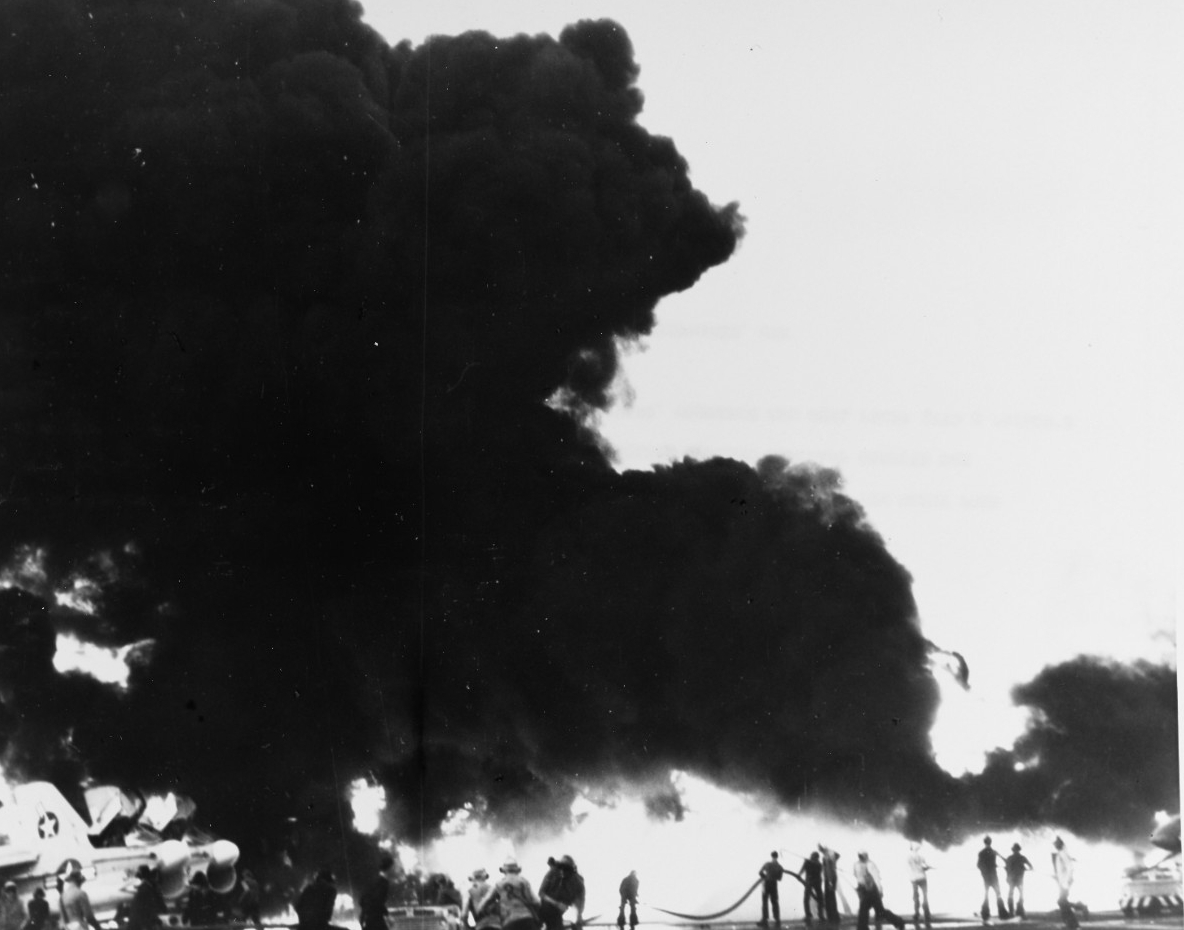 Damage control fire hose crews fighting to keep the fire under control on the fantail of Enterprise, 14 January 1969 (USN 1137375).

On the morning of 14 January 1969, the nuclear-powered aircraft carrier USS Enterprise (CVAN-65) was operating about 70 nautical miles southwest of Pearl Harbor, Hawaii. She was preparing for an 0830 launch of six F-4 Phantom II fighters, seven A-7 Corsair II light attack jets, one RA-5C Vigilante photo-reconnaissance aircraft, one EKA-3B tanker, and one E-2A Hawkeye airborne early warning aircraft of Air Wing NINE (CVW-9). This would be for the final battle drill on the last day of an operational readiness inspection (ORI) in preparation for Enterprise’s fourth deployment to Vietnam (and eighth deployment overall.) Flight operations had commenced at 0630 that morning.

At 0818, as the Enterprise was commencing a turn to port into the wind, an explosion occurred on the port quarter of the flight deck outside the landing area. An MD-3A aircraft starter unit (“huffer”) had been positioned so that hot exhaust was blowing on the warhead of a MK-32 5-inch Zuni rocket. This warhead was mounted in a pod of four rockets on the starboard wing (No. 8 station) of Fighter Squadron NINETY-SIX (VF-96) F-4J Phantom II No. 105. The huffer’s exhaust temperature could reach 590 degrees (F) at a two-foot distance, while only 358 degrees was sufficient to cook off the warhead in about one minute and 18 seconds (per the subsequent investigation). The aircraft was also carrying two wing fuel tanks (one on the starboard wing outboard of the Zuni rockets) and six MK 82 500-pound bombs.

A junior airman apprentice had attempted to call attention to the dangerous situation, but his warning was either not understood, or not heard in the din of jet noise. The subsequent investigation determined that warning was probably already too late. When the Zuni warhead exploded, shrapnel perforated the external fuel tanks and ignited a JP-5 fuel fire. About one minute later, the other three Zuni rockets on F-4J No. 105 exploded, blowing holes in the flight deck down which burning JP-5 flowed into the O-3 level.

The skipper of Enterprise, Captain Kent Lee (future vice admiral and commander of Naval Air Systems Command) promptly steered so the wind blew smoke and flames off the flight deck. However, after three minutes, a bomb on a Phantom exploded, blowing an even bigger hole in the flight deck (about 8 by 7 feet), and spreading burning fuel into the ship down to the O-2, O-1, and 1st Deck levels. This explosion severed fire hoses and rendered the closest fire-fighting foam units inoperative. This was followed by two more 500-pound bomb explosions, and then three more on a rack that created an 18- by by 22-foot hole and ruptured a 6,000-gallon fuel tank, resulting in a huge fireball. In all, there were 18 explosions that blew five large holes in the flight deck (although not in the landing area) and destroyed eight F-4’s, six A-7’s, and the EKA-3B tanker.

The huffer driver, Airman John R. Webster, was killed instantly by the first blast; the radar intercept officer of F-4J  No. 105, LTJG Buddy Pyeatt, was killed in the fire; and the pilot of the aircraft, LTJG Jim Berry died as a result of his burns months later (resulting in different casualty numbers in different accounts). Many of those who died were killed by the second explosion as they rushed to fight the fire. A preponderance of those killed were flight deck maintenance personnel of VF-96 and VF-92, and from the ship’s V1 Division. Other crewmen were killed as they ran bravely toward the fire, while others were trapped in compartments below decks. (Of note, USS Rogers—DD-876—was commended for aggressively coming alongside Enterprise to help fight the fires, while USS Bainbridge—CGN-25—rescued a number of Sailors blown over the side.)

Despite the casualties, a big difference between the fires of Enterprise and Forrestal (see H-Gram 008) was that on Enterprise 96 percent of ship’s company and 86 percent of air wing personnel had received formal firefighting training, whereas on Forrestal only 50 percent of the crew and none of the air wing had been trained. That so many on Enterprise were trained was a direct result of lessons learned during the Forrestal fire. Other carriers had had “near-misses” with huffer exhaust, but that had not been disseminated widely enough. One result of the fire on Enterprise was the re-design of the huffer so that the hot exhaust was vented directly upward. The combined lessons learned from the fires on Forrestal and Enterprise were extensive, resulting in a major overhaul of carrier damage control and firefighting. Although there have been other fires on aircraft carriers, Enterprise was the last major conflagration. Sadly, many of the lessons from carrier fires in World War II had been forgotten; this certainly the case by the time of the 1953 fire on USS Leyte (CV-32), in which 32 were killed, and the 1954 fire on USS Bennington (CV-20), in which 103 were killed. More of those lessons had been forgotten by the time of the fire on USS Oriskany (CV-34) that killed 45 in 1966, and USS Forrestal, with 134 killed in 1967. The moral of this story is that complacency kills and it is important to remain ever vigilant so that the 28 men who died and the 314 who were injured in the fire on Enterprise did not do so in vain.

(Primary source for this section is the USS Enterprise Board of Inquiry Report, as well as NHHC Dictionary of American Fighting Ships [DANFS] entry for USS Enterprise.)