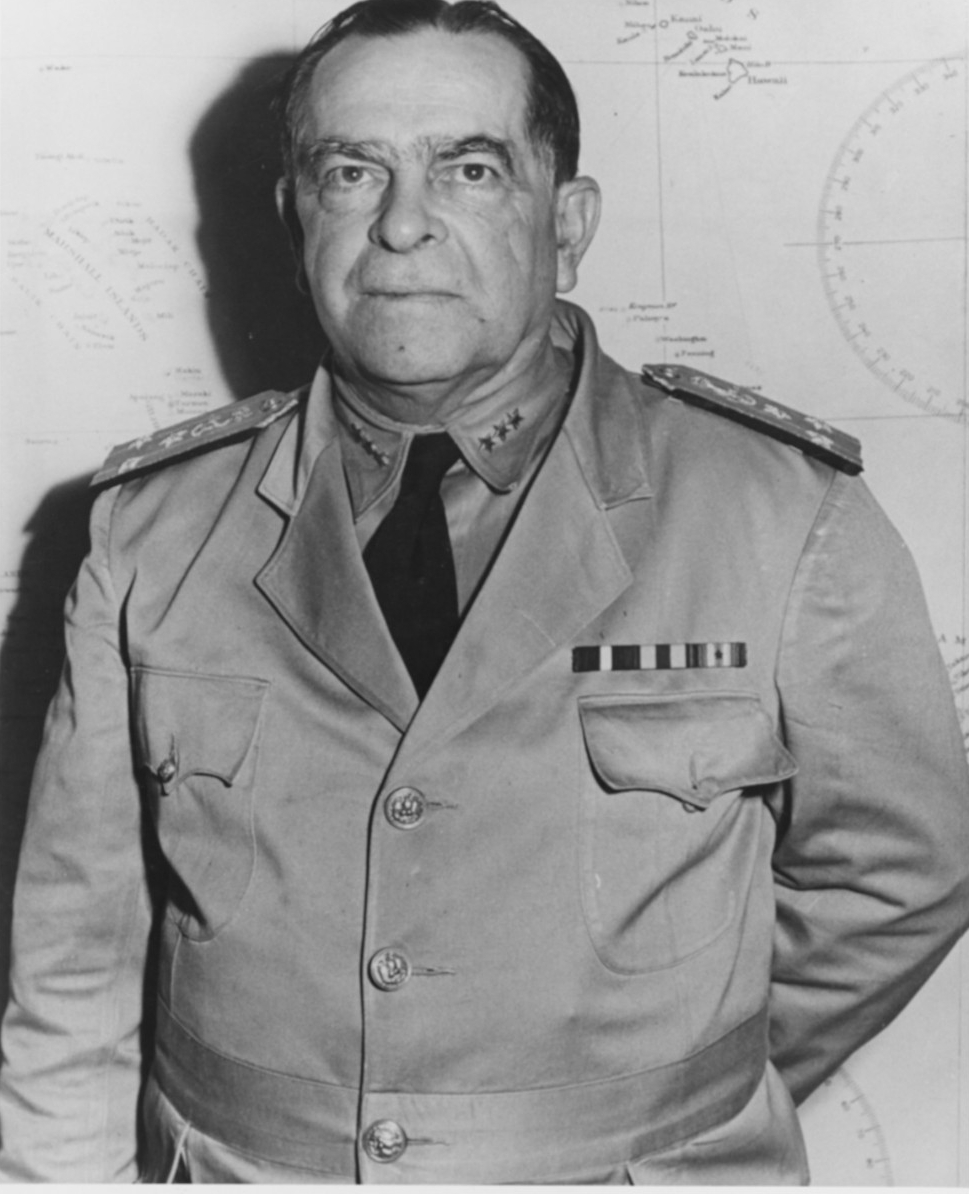 In a nutshell, Admiral Kimmel’s plan to trap the Japanese at Wake consisted of three carriers, under the overall command of RADM Fletcher, who was slightly senior to RADM Aubrey Fitch, embarked in Saratoga.  Saratoga would be the core of the relief effort.  Lexington (RADM Wilson Brown embarked) would launch diversionary strikes into the Marshall Islands, but positioned to support Saratoga.  Enterprise (RADM William Halsey embarked) would operate in vicinity of Midway to cover approaches to Oahu, or support Saratoga and Lexington as required.

With the advantage of 20/20 hindsight, it is easy to second-guess Vice Admiral Pye’s decision to abort the Wake Island relief mission.  However, there were numerous factors that influenced his decision.

Uncertain Intelligence.  Aided by documents recovered from downed Japanese aircraft, Kimmel’s Intelligence Officer, LCDR Edwin Layton, accurately determined that six Japanese aircraft carriers had participated in the strike on Pearl Harbor, and that they were returning to Japanese home waters.  He assessed that the Japanese strike was a hit-and-run, and that neither a follow-up airstrike nor an invasion of Oahu were imminent.  After the failed Japanese attempt at Wake Island, Layton further assessed that the Japanese would detach one carrier division (two carriers) from the strike force to soften up Wake in advance of a second attempt.  Although Layton was correct, proof (except for six carriers) was lacking.  The code-breaking effort of Commander Joseph Rochefort’s team at Station Hypo, having finally been allowed by OP-20-G in Washington to switch their effort from the apparently unbreakable Japanese Admiral’s Code to the Navy General Operating Code (later referred to as JN-25 series) was only beginning to bear fruit.  Layton’s assessments were based significantly on Hypo’s “traffic analysis” of Japanese communications, which was potentially subject to Japanese deception.  Having not been cut in on the somewhat “under-the-table” relationship between Rochefort, Layton and Kimmel before Pearl Harbor, Pye lacked a sustained relationship with Layton and trust in the intelligence he provided, trust that Nimitz showed later.

Criticality of the Aircraft Carriers.  With the Pacific Fleets battleships on the bottom or damaged at Pearl Harbor (with the exception of USS Colorado on the West Coast) the three aircraft carriers then in the Pacific (USS Lexington(CV-2), USS Saratoga (CV-3), and USS Enterprise (CV-6)) were all that opposed the Japanese, and were critical to defending Oahu against any Japanese air attack until additional land-based fighters could be shipped.  Loss of any of the three would be grave.  Almost as serious would be loss of the carriers’ supporting oilers.  Although there was plenty of fuel in Pearl Harbor’s undamaged tanks (a critical Japanese error), tankers were in acutely short supply, especially those capable of underway refueling.

Japanese Land-based Air Threat.  Even prior to Pearl Harbor, land-based aircraft were viewed as a significant threat to surface ships, including aircraft carriers, and naval ships operating in range of land-based aircraft did so with great caution and at significant risk.  Japanese land-based bombers (torpedo and level) had made short work of the British battleship HMS Prince of Wales and battlecruiser HMS Repulse in the South China Sea, with heavy loss of life (over 800 KIA) on 10 Dec 41.  The impact of the action was profound, as Prince of Wales was amongst the most modern battleships in the world, yet succumbed with minimal loss to the Japanese.  Wake Island was within extreme range of long-range twin-engine Japanese bombers operating from Japanese bases in the Marshall Islands.  Pye was well aware of this threat and considered it significant.  However, unlike the aircraft carriers that would have been involved in the Wake Island operations, the Prince of Wales and Repulse had no air cover.  In addition, the Japanese bombers were traversing great range without fighter escort, which would have made them more vulnerable to U.S. carrier-based fighters.

Inadequate U.S. surface ship anti-aircraft capability.  As brutally demonstrated at Pearl Harbor, the anit-aircraft guns installed on U.S. warships were woefully inadequate in numbers, range, capability and reliability, especially against dive bombers.  Also as shown at Pearl Harbor, and confirmed in AAA exercises afterwards, an astonishingly high number of 5” anti-aircraft rounds were defective (on some ships, all of them.)

Japanese submarine threat.  In the early days of the war, Japanese submarines were far more aggressive and effective than in later years.  Over 25 Japanese submarines participated in the attack on Pearl Harbor, many operating from the Marshall Islands where they could potentially threaten the Wake Island operation.  The constant barrage of false alarms further exaggerated an already serious threat.  Pye’s concerns about submarines were not unfounded.  In January 42, the Saratoga was torpedoed and put out of action for months, and the oiler Neches was torpedoed and sunk.

Delay.  The U.S. naval forces involved in the relief effort encountered repeated delays for a host of reasons, although the primary impediment was insufficient practice in refueling underway in anything but calm sea states.  The decision of RADM Fletcher to refuel his destroyers when they really didn’t need to be refueled, resulted in Saratoga making only 100 miles toward Wake Island the day before it fell.  Pye’s decision to assign a specific rendezvous point for the Lexington to join with Saratoga, also came under intense criticism as it held Saratoga back.  Saratoga was about 600 miles from Wake when the mission was cancelled.

Hubris.  Pye’s decision was met with a storm of criticism by staff officers and aviators embarked on the aircraft carriers, who lobbied their commanders, including Fletcher, to ignore the order.  In some cases officers were vocally insubordinate.  Fitch actually recused himself to his cabin to avoid what was described as “mutinous” talk by his staff officers.  This has gone down in the history books as imploring U.S. commanders to follow the example of Nelson before his victory at Copenhagen of putting his blind eye to the telescope to avoid seeing his commander’s order to disengage.  Nevertheless, although itching for a fight to avenge Pearl Harbor, few if any of the officers advocating such action had yet to feel the sting of a first-hand encounter with Japanese Naval Aviation.  And as the Japanese were to show at Coral Sea, Eastern Solomons, and Santa Cruz, even just two of the Pearl Harbor veteran Japanese carriers (or even just Hiryu alone at Midway) could be extremely dangerous.

Acting.  Pye was also sensitive to the fact that he was the “acting” Pacific Fleet Commander until the arrival of Nimitz and felt some obligation to deliver to Nimitz all three carriers intact, which may also have affected his aggressiveness.  It should be noted that Pye was a highly respected (despite predicting on 6 December that the Japanese would never attack the U.S.) and successful commander, regarded as one of the best strategic thinkers in the Navy (and as a member of the Knox-King-Pye Board in 1920 significantly shaped the future of U.S. Navy higher education.)  Nevertheless, in a CNO favorite book, “The Rules of the Game” (about Jutland) is the observation that every senior commander that failed in battle had previously been judged successful by the system that promoted him.

Admiral Pye subsequently reverted to two-star, and became President of the Naval War College from 1942 to 1946.  His son, LCDR John Briscoe Pye was lost along with all hands on the 13th war patrol of submarine USS Swordfish (the first U.S. submarine to sink a Japanese ship in Dec 41), off Kyushu in January 1945.