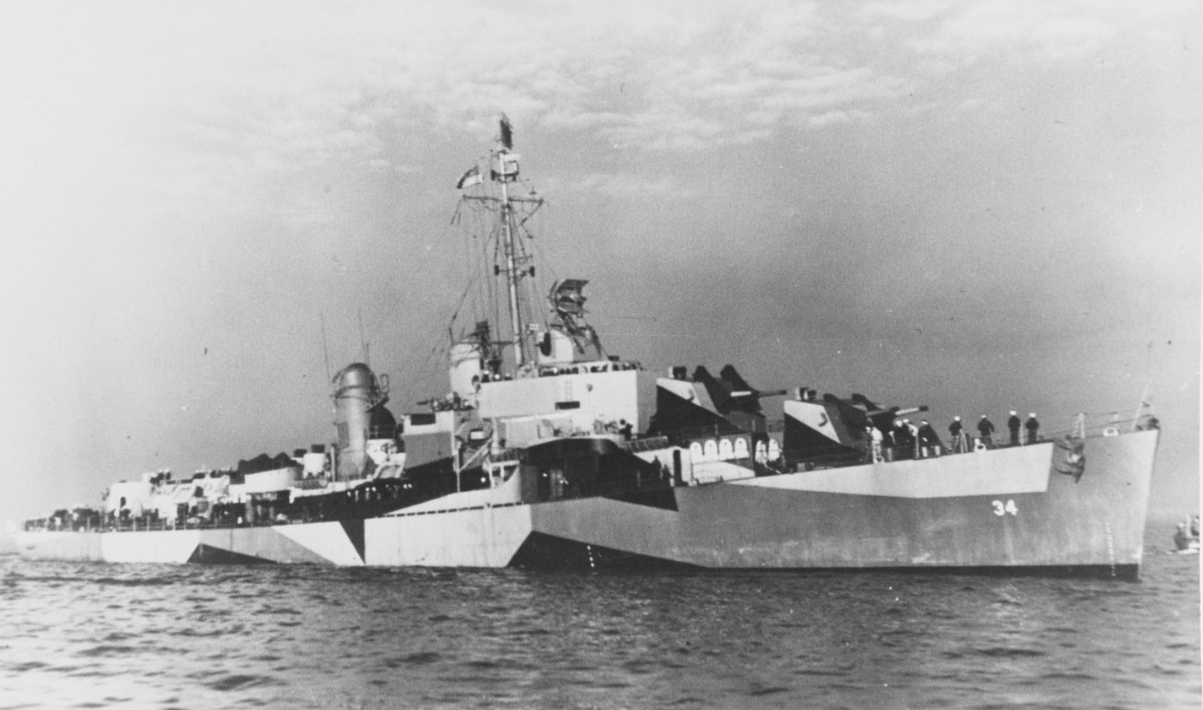 This H-gram covers the Naval Battle of Okinawa at the crescendo of Japanese kamikaze attacks Kikusui No. 5 and No. 6 in early May 1945. It includes the epic story of USS Aaron Ward, coverage of the desperate day on Radar Picket Station 1 north of Okinawa on 4 May, and of USS Hugh W. Hadley’s 11 May 1945 record for the most aircraft shot down by a surface ship in a single engagement. (For more on the background for the invasion of Okinawa, please see H-Gram 044.)

Any time I give a talk about the war in the Pacific, I usually make a statement that the overriding lesson of that terrible war is that never again should the United States and Japan face each other on opposite sides of a field of battle. It is vastly better to be on the same side. If you don’t believe me, then here is an example: Among the hodgepodge of 125 kamikaze aircraft that the Japanese army and navy threw at U.S. naval forces in Kikusui No. 5 on 4 May 1945 were 15 Kawanishi E7K aircraft, code-named “Alf.” The Alf was a three-seat reconnaissance biplane seaplane of early 1930s vintage made out of wood and canvas. Its maximum speed was 170 miles per hour. Despite U.S. naval intelligence’s knowledge that Kikusui No. 5 was coming and U.S. ships being ready, despite being intercepted by overwhelming numbers of technologically superior radar-directed fighter aircraft, despite the densest concentration of radar-directed anti-aircraft weapons ever put to sea, some of the Alfs made it through (in fact, high-technology proximity-fuzed shells didn’t work on wooden airplanes). In a mind-boggling example of raw courage and determination, the Alfs kept coming and some hit their targets. One Alf out-foxed U.S. fighter pilots and then, in an act of supreme self-sacrifice, inflicted the fatal blow on the destroyer Morrison (DD-560).

The first two weeks of May were the peak of Japanese kamikaze attacks off Okinawa, although there would still be many more attacks through the end of June, some of them devastating for the ships that were struck. The Kikusui No. 5 attacks on 3 and 4 May cost almost 600 American lives aboard ship, with three destroyers sunk, three LSM(R) “rocket ships” sunk, and numerous other ships damaged, including an escort carrier, light cruiser, and three destroyers so badly damaged they were knocked out of the war. In the following week, a destroyer and another LSM(R) would be sunk, and another destroyer and two destroyer escorts would be crippled. As painful as these losses were, they represented only a small fraction of the U.S. Navy force protecting the Army and Marine ground campaign on Okinawa, which was making slow progress against intense Japanese resistance. The issue at sea was never in doubt, but the cost in lives weighed heavily on senior U.S. commanders, which was exactly the Japanese intent.

Whether the ship was saved or lost, the actions of some of the ships involved in this period represent some of the most epic stories of courage, will power, and sacrifice in the entire history in the U.S. Navy, often against overwhelming odds in the face of an enemy determined to sacrifice their own lives in defense of their homeland. In particular, the actions of the crews of destroyer-minesweeper Aaron Ward and destroyer Hugh W. Hadley deserve to be immortalized. If ever there were examples of the “Don’t Give Up the Ship” ethos, these would be right at the top of the list.

As the sun was going down on 3 May 1945, Aaron Ward and destroyer Little (DD-803) were subject to a particularly intense kamikaze attack by Japanese army aircraft in what had previously been a relatively quiet sector. Despite intense anti-aircraft fire, Little was hit by four kamikaze in less than four minutes, with damage so severe no amount of valor or will power could counter it. She went down in 12 minutes. Aaron Ward was attacked by 11 aircraft and shot down the first two before the third hit. In a matter of minutes, the ship had shot down four planes, but was hit by six kamikaze or bombs, leaving her in sinking condition—actually in worse shape than Laffey (DD-724) had been on 16 April. Nevertheless, Aaron Ward’'s crew rallied and in an hours’ long overnight ordeal saved their ship. For more on Aaron Ward, “the ship that couldn’t be licked,” please see attachment H-046-1.

"Chrysanthemums from Hell": Kikusui No. 5

The mass kamikaze attack Kikusui No. 5 on 4 May was a particularly bloody affair. Once again, the destroyers on Radar Picket Station No. 1 (RP1) north of Okinawa bore the brunt of the attack as brave but inexperienced Japanese pilots went after the first ship they saw. Destroyers Ingraham (DD-694) and Morrison put up a valiant fight against overwhelming odds. Ingraham survived her damage, but Morrison went down guns blazing and with heavy loss of life (159 men). The irony was that the fatal blow was delivered by a wooden biplane.

Meanwhile at RP12, west-northwest of Okinawa, destroyer Luce (DD-522) put up a valiant fight, but was overwhelmed and went down quickly, also with heavy loss of life (149 men). Also at RP12, destroyer-minelayer Shea (DM-30) was hit by an Ohka rocket-assisted manned suicide bomb that luckily passed clear through the ship before exploding, but still inflicted severe damage. At the Hagushi anchorage, Rear Admiral Morton Deyo’s flagship, the unlucky light cruiser Birmngham (CL-62), was hit and badly damaged by a lone kamikaze that effectively used the terrain masking of Okinawa’s land mass to evade detection until it was too late. That evening, escort carrier Sangamon (CVE-26) was hit by a lone kamikaze as she came out of Kerama Retto. She survived the worst fire of any escort carrier during the war. For more on Kikusui No. 5 please see attachment H-046-2.

On 11 May 1945, Kikusui No. 6 resulted in another horrific day, which included the truly epic fight by destroyers Hugh W. Hadley and Evans (DD-552) at RP15 northwest of Okinawa. Evans shot down 14 or 15 aircraft before she was put out of action by four kamikaze hits in quick succession. Hugh W. Hadley shot down 19 or 20 aircraft, before she was also gravely damaged by a large bomb and three kamikaze hits. In both cases, the crews fought on and saved their ships, even when it seemed all hope was lost. Hugh W. Hadley’s tally was the most aircraft shot down by a U.S. surface ship in a single engagement.

In all these engagements, the small amphibious craft that supported the destroyers on the radar picket stations (and known as “pallbearers”) put up gallant fights in defense of the destroyers and themselves, shooting down numerous Japanese aircraft. However, three of the scarce LSM(R) “rocket ships” were lost on 3 and 4 May. For more on Kikusui No. 6 and the epic fight of Hugh W. Hadley, please see attachment H-046-3.

As always, you are welcome and encouraged to spread these stories of U.S. Navy valor and sacrifice widely. “Back issue” H-grams, enhanced with lots of photos, may be found here.