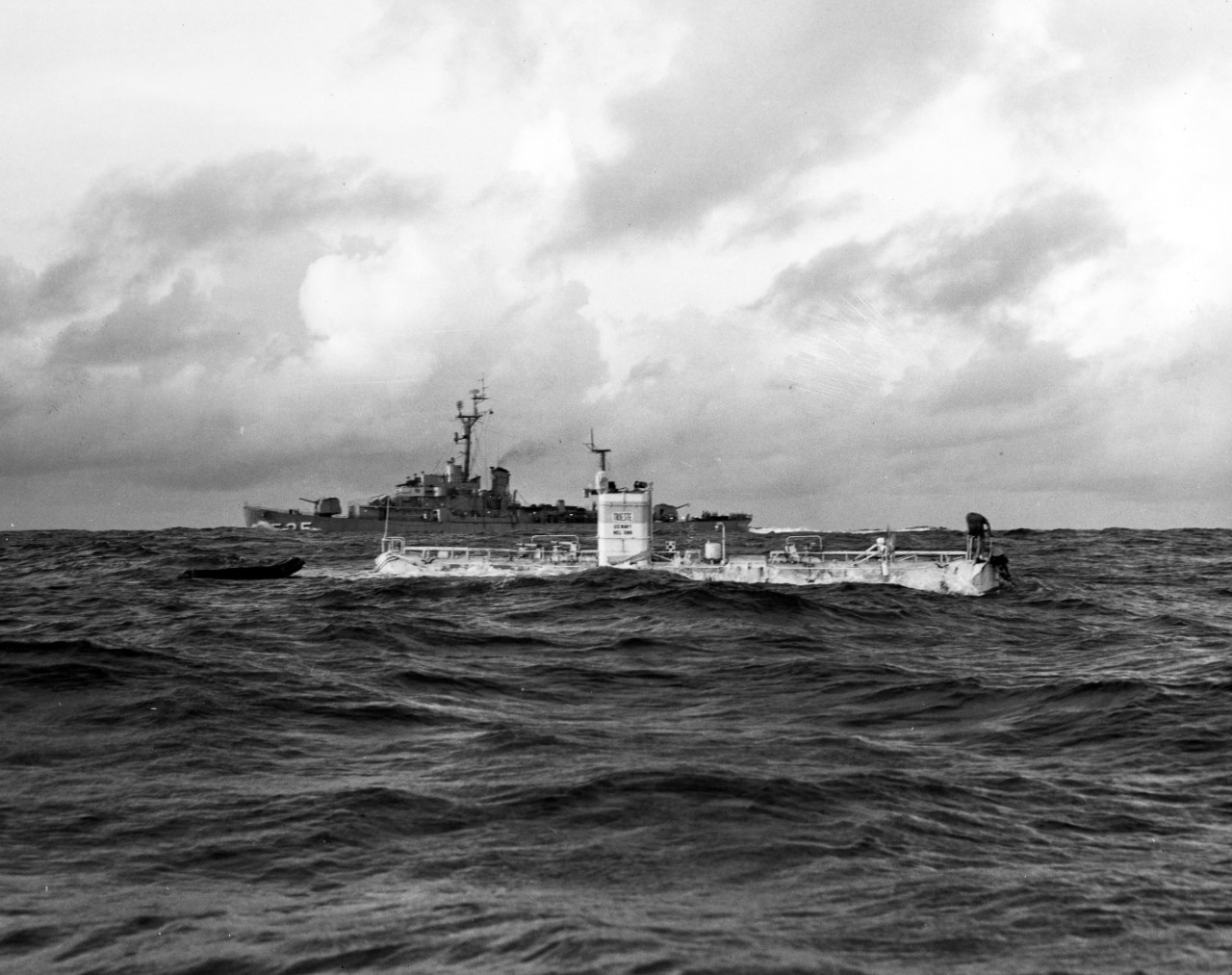 Bathyscaphe Trieste at sea just before its record dive in the Mariana Trench, with destroyer escort USS Lewis (DE-535) in background. Waves were were about five to six feet high when Lieutenant Don Walsh and Swiss engineer Jacques Piccard boarded from the rubber raft attached to the bathyscaphe, 23 January, 1960 (USN 710619).

This H-gram continues coverage commemorating the 75th anniversary of World War II and also touches upon the Vietnam conflict and the Navy deep-sea exploration feats:

As always, broad dissemination is welcome and encouraged—some of these stories are incredibly inspiring. This H-gram may also give some appreciation of the sacrifice of our Merchant Marine brothers.

Separated from her convoy by a steering casualty and a hurricane-force storm, the U.S. Liberty ship SS Henry Bacon was caught alone in the northern Norwegian Sea by an overwhelming force of German Ju-188 torpedo bombers. Her Navy Armed Guard, under Lieutenant (j.g.) John Sippola, put up a ferocious resistance, thwarting all but the last torpedo attack in an action described by Navy historian Samuel Eliot Morison as “no finer instance of merchant ship defense in the history of North Russian convoys.” With some lifeboats and life rafts smashed by the storm and the torpedo hit, there was not enough room for 19 Norwegian refugees (16 women and children) and all of the crew and Navy gunners. Some of the crew were thus faced with the option of dying in the icy water or going down with the ship; the latter was the course chosen by the captain and the ships’ senior personnel. Sippola and six of his Navy gunners survived for three hours on a makeshift raft, with Sippola refusing rescue until all six of his men were aboard the rescue ship. At that point, he succumbed to the cold, with a line just outside his grasp. He would be awarded a posthumous Silver Star. Of the 86 souls on board, 15 Merchant Mariners and seven Navy gunners perished on what was the last Allied ship to be sunk by German aircraft on the notoriously dangerous Murmansk run.

I’m not normally much for poetry, but I thought this tribute to Henry Bacon worth the read:

To the Bacon Crew:

The Steamer was the Henry Bacon / The name we remember so well;

She was searching for the long lost convoy / When down came the Angels of Hell.

The planes came quick and were many / The number I believe was twenty-three;

But five were shot down by the Gunners / And went plunging to death in the sea.

Walker, who was a Navy Gunner / Was manning number seven, we know;

Saw a “Jerry” coming in from the starboard / And sent her flaming to the waves below.

But the odds were still against them / They were waging a losing fight;

And knew that without help from the escorts / That death might be riding that night.

Then came death and destruction / She was hit just abaft the beam;

But the Gunners still manned their stations / And abandoned were the rest of the crew.

There’s no more room in the lifeboat / So one of you young fellows take mine.”

That was something we can never forget / He would never survive it, he knew;

Still he gave his last chance for life / For the sake of the rest of the crew.

There were also passengers aboard / But they all got safely away;

Leaving officers and crew aboard her/ To go down with their ship that day.

The Captain was a fellow we all admire / Stayed on the bridge to the end;

Would rather rest on the bottom forever / Than to go back without all of his men.

Saw the others away in the lifeboats / Then plunged in the icy sea.

Then there were others who followed / Not knowing if they would survive;

But knew that they were useless to their country / Unless they made it back here alive.

For hours they stayed in the water / Some died in that cold Arctic Sea;

But they knew that the lives they were giving / Would keep us all happy and free.

Some were rescued by English destroyers / Who heard their “S.O.S.” from faraway;

And rushed there as quick as possible / Lest they should go down that day.

Those brave men we will always remember / They were shipmates to you and to me;

They gave their homes and their loved ones / For an unknown grave in the sea.

Perhaps their names will never be heard of / Just sailors in the Merchant Marines;

But they’ve kept Old Glory waving / Though we don’t realize how much that means.

So gather close around the table / Let’s drink a toast to the Bacon and crew;

Let’s give them a word of thanks, Boys / They gave up their lives for you.

(From “The Last Voyage of the SS Henry Bacon” by Lloyd D. Carver, SS Horace Gray)

USS Barb (SS-220) Sinks an Aircraft Carrier, Penetrates a Harbor, and Blows Up a Train

In the night on 23 January 1945, USS Barb boldly penetrated Namkwan Harbor on the coast of China, where two Japanese convoys of almost 30 ships had sought refuge. Firing all ten torpedo tubes, Barb probably sank four cargo/transport ships (one of which blew up in a spectacular explosion) and damaged three others. In order to escape, Barb had to run at high speed for over an hour on the surface through shallow and mined water. For this action, Barb’s commanding officer, Lieutenant Commander Eugene Fluckey, was awarded the Medal of Honor (to go with four Navy Crosses) and Barb a Presidential Unit Citation. On a previous war patrol, Fluckey and Barb had sunk the Japanese escort carrier Unyo. On the next deployment (Barb’s 12th and last), she became the first submarine in history (and the only one in World War II) to fire rockets at shore targets. Barb conducted rocket and gunfire attacks on shore installations on Hokkaido, Sakhalin and the southern Kuril Islands, and, on 22–23 July 1945, put a landing party ashore on the coast of Sakhalin that blew up a train (the only “ground combat” on the Japanese home islands during World War II). For more on USS Barb, please see attachment H-041-2.

On 23 January 1945, USS Blackfin ended a series of frustrating patrols by sinking the legendary Japanese destroyer Shigure in the South China Sea. Shigure had a reputation in the Japanese navy as “unsinkable,” having fought in numerous pitched battles, and was the sole survivor of two (Vella Gulf in 1943—where she’d been hit by a torpedo that failed to explode—and Surigao Strait in 1944, where she was badly battered, but survived). During her career, she was hit by bombs twice, and had rescued hundreds of survivors of other Japanese ships. For more on USS Blackfin, please see attachment H-041-3.

Like Blackfin, Batfish put an end to a series of frustrating patrols by sinking three Japanese submarines off northern Luzon between 10 and 13 February 1945. Tipped off by Ultra code-breaking intelligence, Batfish was waiting in ambush as the Japanese attempted to extricate Japanese pilots and aircrew from Luzon (the Japanese in the Philippines had run out of aircraft before pilots). Batfish was also aided by new passive radar-detection gear (early ESM) to detect newly installed radars on Japanese submarines. All three submarines were lost with all hands, and only one of the four assigned to the evacuation mission succeeded. One of the Japanese submarines (RO-112) had been warned by Japanese radio intelligence and narrowly avoided being caught by USS England (DE-635) when the destroyer escort sank six Japanese submarines in May 1944. On a previous war patrol, Blackfin had finished off the destroyer Samidare (which was grounded on a reef). Although not as famous as Shigure, Samidare may very well have put more torpedoes into more U.S. ships than any other Japanese ship (Battles of Java Sea, Guadalcanal—12–13 and 14–15 November 1942—Vella LaVella, and Empress Augusta Bay). For more on USS Batfish, please see attachment H-041-4.

Caught in a ferocious north Pacific storm, the crew of SS Badger State struggled valiantly as the cargo of over 8,900 bombs destined for use in Vietnam began to shift, with some finally breaking loose. On 26 December 1969, one of the bombs exploded, starting fires and blowing a hole in the side of the ship, with the risk of additional detonations. With one lifeboat and other survival gear smashed by the continuing storm, 35 of the ship’s 40 crewmen were loaded into the one remaining lifeboat. However, at a critical moment, a 2,000-pound bomb rolled out of the hole in the side of the ship and landed on the lifeboat, causing it to capsize and spill everyone into the cold water, where albatrosses pecked at those trying to stay afloat. The ship’s captain and four others who had remained aboard were forced to swim for it. The Greek freighter Khian Star was recognized for her heroic work in saving as many crewmen as possible, but in the end only 14 survived, including the captain, and 26 Merchant Marine sailors were lost. Badger State drifted for days while on fire and with bombs exploding, but finally sank just as the U.S. Navy ocean tug Abnaki (ATF-96) was ordered to sink her with gunfire. For more on SS Badger State, please see attachment H-041-5.

Bathyscaphe Trieste and the First Dive to Deepest Part of the Oceans, January 1960

On 23 January 1960, Navy Lieutenant Don Walsh and Swiss engineer Jacques Piccard descended in the U.S. Navy bathyscaphe Trieste to the deepest part of the oceans, Challenger Deep in the Mariana Trench near Guam, reaching bottom at 35,797 feet. More people have walked on the surface of the moon than have been to Challenger Deep. No further attempt was made to reach that depth again until 2012, and only in 2019 did a manned submersible (Limiting Factor) go deeper than Trieste (by 52 feet.) Don Walsh (Navy Submersible Pilot No. 1) had been waved off from applying for the Navy Nuclear Power Program due to his class standing at the Naval Academy. He would get the last laugh as the only Navy lieutenant wearing a Legion of Merit (personally presented by President Dwight D. Eisenhower) He would go on to be one of the first officers in the Navy to earn a doctorate on active duty and, after retirement as a captain, would go on to be a world-renowned and much-honored ocean scientist and explorer. Trieste is on display at the National Museum of the U.S. Navy, on the Washington Navy Yard. For more on Trieste, please see attachment H-041-6.