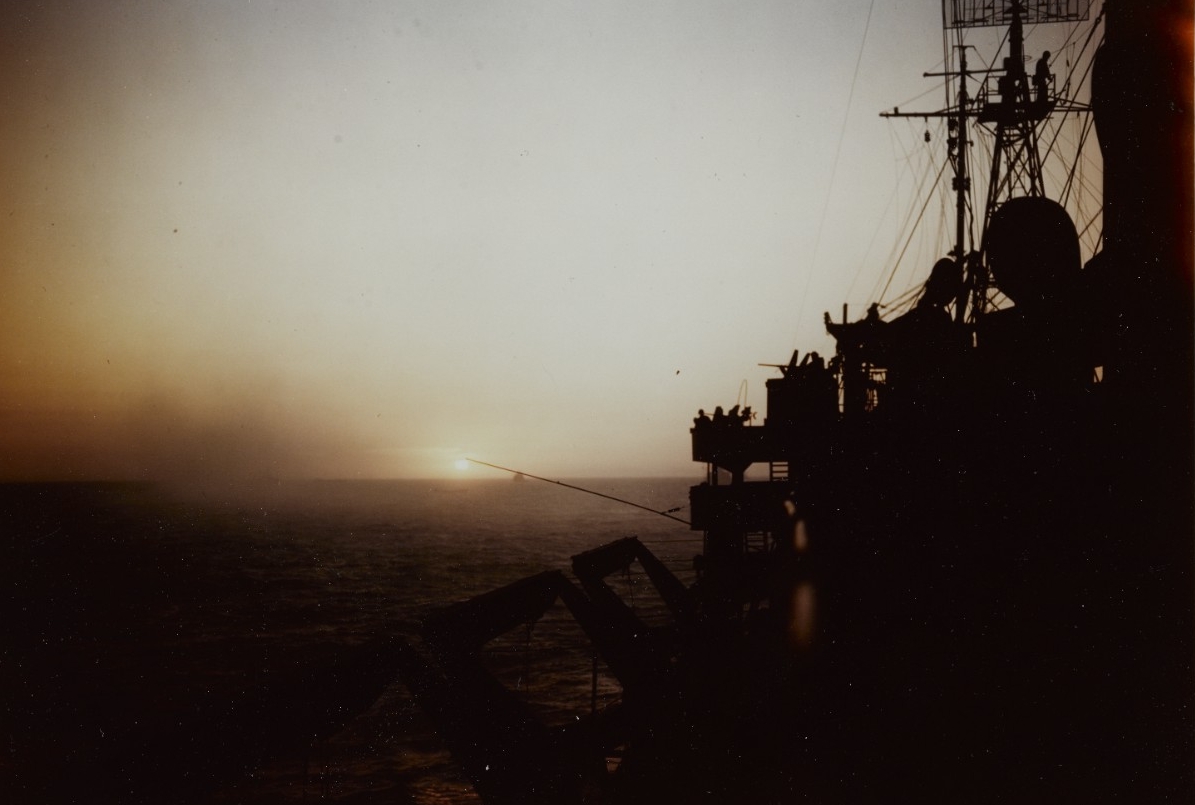 30th Anniversary of the "Tanker War"

The "Tanker War" in the Arabian Gulf reached a tragic culminating point on 3 July 1988, when the Aegis cruiser USS Vincennes (CG-49) shot down Iran Air flight 655, killing all 274 passengers, including 66 children, and 16 crew members aboard. A series of human errors by U.S. Navy personnel led the commanding officer of Vincennes, Captain William C. Rogers III, to believe he was under attack by an Iranian Air Force F-14 (none were airborne). With no intent to become a victim like USS Stark (FFG-31), on 17 May 1987, Rogers gave the order that resulted in the destruction of an Iranian passenger jet, on a short scheduled flight—albeit 30 minutes behind schedule—on a commercial airway from Bandar Abbas, Iran, to Dubai, United Arab Emirates. A week later, Iraq launched a major offensive into Iran, with extensive use of chemical weapons. The combination of the two events caused Iranian leadership to conclude that the United States was now actively engaged in the war on the side of Iraq, which then led Iranian Supreme Leader Ayatollah Khomeini to accept United Nations Resolution 598 on 20 July 1988, which led to a cease-fire effective 20 August. The sad irony is that the deaths of 290 aboard Flight 655 were a significant factor in ending a bloody eight-year war between Iran and Iraq that had cost the lives of over 500,000 soldiers and tens of thousands of civilians. Although the situation in the Arabian Gulf remained tense (and still is today) the “Tanker War” was over. For more on the “Tanker War,” USS Stark, USS Samuel B. Roberts (FFG-58), and Operation Praying Mantis, please see H-Gram 018. For more on the shoot-down of Iran Air 655, please see attachment H-020-1.

The United States and Allies began advancing in earnest up the Central Solomon Island chain in the late spring and early summer of 1943 toward the Japanese stronghold of Rabaul—located just to the northwest of Bougainville and the northern Solomon Islands—and the ultimate objective of the Solomon Islands Campaign. The operation to capture Munda airfield on the island of New Georgia provoked several pitched naval battles between the U.S. Navy and the Imperial Japanese Navy—the battles of Kula Gulf, Kolombangara and Vella Gulf—and a near continuous stream of lesser battles with no names, one of which included the loss of PT-109, commanded by future President John F. Kennedy.

Despite the great losses on both sides during the Guadalcanal campaign—which the U.S. Navy could replace and the Japanese could not—during the battles in the Central Solomons in June through August 1943, the Japanese navy showed it was still full of fight, aggressive, highly competent, and still had some surprises for the U.S. Navy—such as new passive radar detection capability which turned the U.S. Navy’s use of radar to the Japanese advantage at Kolombangara. Although the U.S. Navy had learned and incorporated numerous lessons from the previous battles in the Solomons—for example, new or refitted ships now had something approximating a combat information center (CIC) to integrate radar with communications and weapons control—it still failed to understand the magnitude of the threat posed by the Japanese Type 93 oxygen torpedo. The torpedo, which after the war was known as "Long Lance,” cost the light cruiser USS Helena (CL-50), several destroyers, and caused severe damage to other cruisers and destroyers. The Japanese destroyers' ability to reload their torpedoes during a battle also came as a rude and costly shock. Both navies struggled with command and control of their forces during night battles. For example, U.S. PT-boats accidentally gave the coup de grace to Vice Admiral Richmond Kelly Turner's flagship, the USS McCawley (APA-4), which had been crippled by a daylight aerial torpedo attack, mistaking it for a Japanese transport. In turn, the Japanese were surprised by minefields laid by U.S. destroyers converted to fast minelayers. U.S. PT-boats waged frequent combat with Japanese troop-carrying barges, which although slow, were heavily armed and armored and proved to be very tough targets.

Neither side committed battleships or even heavy cruisers to the fight in the Central Solomons, except for one Japanese attempt by heavy cruisers that was broken up by air attack. The Japanese carriers remained far away, although their air groups, operating from land bases, were committed to the fight, and their planes mostly lost. The United States used the fleet carriers USS Enterprise (CV-6) and USS Saratoga (CV-3), sparingly, as they were the only ones left until new Essex-class carriers started coming on-line very late in 1943. Through it all, near-constant battles for air supremacy were waged over the Central Solomons (inspiring future mediocre TV shows like Baa-Baa Black Sheep) and by this time the degradation of Japanese pilot skills was readily apparent. Although aircraft losses were heavy on both sides, they were much greater for the Japanese.

By August 1943, the United States was in possession of key locations in the Central Solomons, and had bypassed several Japanese-held islands (the beginnings of the "island-hopping" strategy) and preparing to advance to Bougainville in the Northern Solomons. The campaign both ashore and at sea had proved even more costly than expected, because the Japanese Navy just didn't know how to quit. For more on the Central Solomon Islands campaign, please see attachment H-020-2.

I had planned to write about Operation Husky, the invasion of Sicily (which commenced on 9 July 1943), but the Central Solomon Islands campaign sucked up all my bandwidth this month, so I will write on Husky next month. In terms of the number of troops in the initial landings (eight divisions across about 100 miles of beaches) the invasion of Sicily (a combined United Kingdom/United States operation) was the largest amphibious operation in history, and the major landings actually took place at night. The operation was very successful, despite rough seas, and resulted in relatively few U.S. Navy losses (one destroyer, one minesweeper, several LSTs, a number of smaller amphibious craft, and an ammunition ship in a spectacular explosion) despite occasionally intense German and Italian resistance. The operation was only marred by one of the worst "friendly fire" incidents of the war, when U.S. Navy ships and U.S. Army shore batteries accidentally shot down 23 U.S. transport aircraft at night, killing over 60 crew and 81 U.S. paratroopers aboard. More in a future H-gram.

On 10 July 1918, the U.S. submarine AL-2 (SS-41) attempted to engage a German U-boat later believed to be UB-65, south of Fastnet Light on the south coast of Ireland, when a German torpedo apparently detonated prematurely about 200 feet from AL-2's engine room. At that time, the periscope of the U-boat was sighted about 80 yards off the starboard quarter just beyond the explosion. Both ships then submerged, and in the confused sequence of maneuvering that followed, AL-2 attempted to ram the U-boat underwater. The acoustic signatures were even more confusing and at the time AL-2 thought there was a second German U-boat in the area.

In analysis shortly after the attack, it was believed that the UB-65 had been damaged by the premature explosion of her own torpedo, and as a result of AL-2's maneuvers, UB-65 did not have the chance to reach the surface before her damage proved fatal and she sank. Although it was clear that AL-2 did not directly sink UB-65, the British Admiralty (in charge of Allied submarine operations in the Western Approaches to Great Britain and Ireland) gave AL-2 credit for sinking UB-65, which would make UB-65 the first submarine to be sunk by a U.S. submarine.

The commanding officer of AL-2, Lieutenant Paul F. Foster, USN, was awarded the Distinguished Service Medal (DSM) for the attack and for the rest of AL-2's deployment to European waters. At the time, the DSM was the second highest Navy award, above a Navy Cross, and could be awarded for valor. Lieutenant Foster had previously been awarded the Medal of Honor for courage under fire as an ensign in the Vera Cruz operations in April 1914, and he would later be awarded a Navy Cross for his actions during a turret explosion aboard USS Trenton (CL-11) in 1924, making him the first Navy member to be awarded all three of the highest Navy decorations.

However, in 1930, the German Admiralty assessed that UB-65 was lost with all hands in an accident off Padstow, England on or after 14 July 1918 (four days after the incident with AL-2), and diving expeditions in 2003 and 2004 located and then positively identified UB-65 near the position the Germans reported, displaying no outward signs of any combat damage. UB-65 was actually a cursed ship if there ever was one, suffering numerous accidents during her short career, and was supposedly believed by her own crew to be haunted. She has since passed into "ghost story" lore with numerous embellishments of the facts and fabrications to be found on the Internet. For more on the engagement and the accident-prone history of UB-65, please see attachment H-020-4.

As U.S. Army troops closed in on Santiago de Cuba, including Theodore Roosevelt's famous charge of the "Rough Riders" up San Juan Hill, Spanish Admiral Pascual Cervera y Topete had a choice. He could keep his force of four cruisers and two destroyers in port, where they were likely soon to be destroyed by American ground artillery, or he could sortie from the harbor and attempt to run the blockade of five U.S. Navy battleships and numerous other ships right outside the harbor. Admiral Cervera's cruisers were designed to be fast, but poor maintenance, lack of training, and lack of resources had taken their toll. Nevertheless, on 3 July 1898, Cervera decided to go out in a blaze of glory, although it was mostly a blaze of American gunfire—the great majority of which missed—although enough hits were taken to do the job. USS Oregon (Battleship No. 3), steamed all the way around Cape Horn from the U.S. West Coast in anticipation of the outbreak of war. She proved herself to be the fastest ship in the U.S. force and ran down the one Spanish cruiser that had a chance of getting away.

When the Battle of Santiago was over, the entire Spanish force was destroyed, with 343 dead, 151 wounded and 1,889 captured (many of whom were saved by extraordinarily brave and chivalrous actions by U.S. Navy Sailors). The U.S. Navy suffered one dead and one wounded. The decisive defeat of the Spanish squadron ensured the U.S. victory over Spanish forces in Cuba, resulting in Cuban independence (sort of) from Spain and an end to the Spanish-American War with an armistice on 12 August 1898. The victory was marred by the appalling lack of accuracy of U.S. naval gunfire, and the unseemly public dispute between Rear Admiral William T. Sampson and Rear Admiral Winfield Schley over who should get the credit for the victory. As a result, neither achieved the degree of fame and adulation given Admiral George Dewey at the earlier Battle of Manila Bay, even though the Spanish squadron at Santiago put up a much better and more courageous fight. For more on the Battle of Santiago, please see attachments H-020-5 and H-020-6.

Note: I write these H-grams under a significant time crunch, so I generally rely on secondary sources (that I have good reason to believe are accurate and credible), which is why I don't claim H-grams to be "scholarly." Nevertheless, many of these secondary sources would not exist were it not for the work of the NHHC Histories Branch's Documentary Histories Section in compiling primary source material in a manner easily accessible to scholars and other authors of popular history. For example, our website includes a documentary history of the Navy in the Spanish-American War, which makes available a plethora of transcribed primary sources along with short introductory essays and annotation. Included are sections on recent topics, such as the Battle of Manila Bay, and forthcoming topics, such as the Naval War Board. So, if you are interested in a "deeper dive" on U.S. Naval History, try this link.