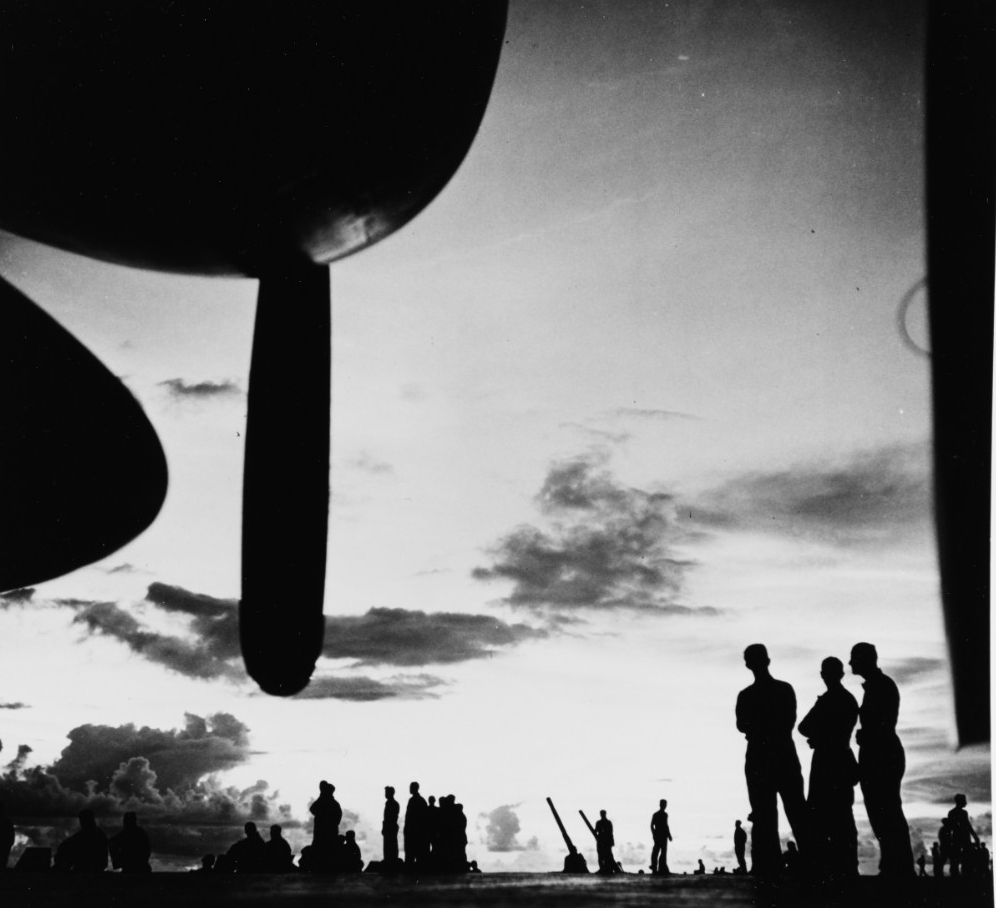 I regret that with the unfortunate number of flag officer passing notes in the last month I have fallen behind in tracking with 75th anniversary events of World War II. However, my trusty staff has managed to keep up with articles, photos, and documents on the Naval History and Heritage Command website, so you can always find interesting and constantly updated things there.

Back issues of H-grams (enhanced by photos and charts) can be accessed here. Download a PDF of H-Gram 024 (2.5 MB).

By the end of November 1943, U.S. and Allied forces were on the offensive against the Japanese in the southwest and central Pacific along three axes of attack.

In New Guinea, Allied forces under the command of General Douglas MacArthur, supported by the U.S. Navy’s Seventh Fleet, had completed the protracted capture of Salamaua and Lae, and were commencing a series of advances westward along the northern coast of New Guinea with the objective of reaching the Philippines to fulfill MacArthur's 1942 promise that he would return. (I will cover the New Guinea campaign in a future H-gram.)

In the Central Pacific, Admiral Chester Nimitz and the U.S. Fifth Fleet (under the command of Vice Admiral Raymond Spruance) commenced the drive for the Marianas and Japan by capturing Tarawa and Makin in the Gilbert Islands chain, in an operation code-named Galvanic. The bloody battle of Tarawa, and the high price the U.S. Marines paid to capture it (just over 1,000 killed) proved to be controversial at the time and in the years since, with a continuing debate over whether the atoll’s capture was necessary or worth the cost. What is less well known was the high price the U.S. Navy paid for Galvanic, with the loss of the escort carrier Liscome Bay (CVE-56) with over 640 of her crew killed, including Rear Admiral Henry Mullinex and Mess Attendant 1st Class Doris Miller (the first African American to be awarded a Navy Cross, for his actions during the attack on Pearl Harbor). A turret explosion onboard the battleship Mississippi (BB-41) claimed the lives of 43 sailors. An additional 40 sailors were lost on the submarine Sculpin (SS-191), in which Captain John P. Cromwell chose to go down with the boat in order to keep his knowledge of “Ultra” intelligence from the Japanese. Cromwell was awarded a posthumous Medal of Honor. Fighter pilot Lieutenant Commander Edward "Butch" O'Hare, previously awarded a Medal of Honor, was lost in a night action over the Gilberts. (I will cover Operation Galvanic in detail in H-Gram 025.)

The third axis of attack, and the subject of this H-gram, was the culmination of the advance through the Solomon Islands chain by forces under the command of Admiral William F. Halsey, commander, U.S. Third Fleet: Operation Cherryblossom, the U.S. landings on Bougainville, the northernmost major island in the Solomons. This operation would bring land-based Allied airpower within 200 miles of the key Japanese stronghold of Rabaul, setting the stage for its subsequent encirclement and isolation.

Key (or at least interesting) events covered in H-gram attachment H-024-1 include:

In the "First Air Battle of Guadalcanal," a large Japanese air counter-attack against the U.S. carriers following the strike on Rabaul instead struck a U.S. force of two amphibious craft and a PT-boat, which fought valiantly and escaped largely unscathed, downing several Japanese aircraft. The Japanese claimed a great, but imaginary, victory. The PT-boat skipper received a memorable congratulatory note from Rear Admiral Wilkinson, Third Fleet amphibious force commander) that concluded with "Fireplug Sprinkles Dog."

Following the carrier strikes on Rabaul, the Japanese were still able to conduct fairly large-scale air attacks against U.S. ships bringing reinforcements and supplies to Bougainville. These air attacks were mostly noteworthy for extravagant claims compared to minimal results, and heavy Japanese aircraft losses. Several U.S. cruisers were damaged in these attacks, and the fast destroyer transport McKean (DD-90/APD-5) was sunk with a significant number of her crew and Marine passengers. McKean had been the sole survivor of Transport Division 12, which had sustained the Marines ashore on Guadalcanal during the darkest days after the Battle of Savo Island in August 1942.

For more on Operation Cherryblossom and the U.S. victory in the Solomon Islands, please see attachment H-024-1.

Two 50th Anniversary events of note (that I will cover in more detail in the next H-gram) include: