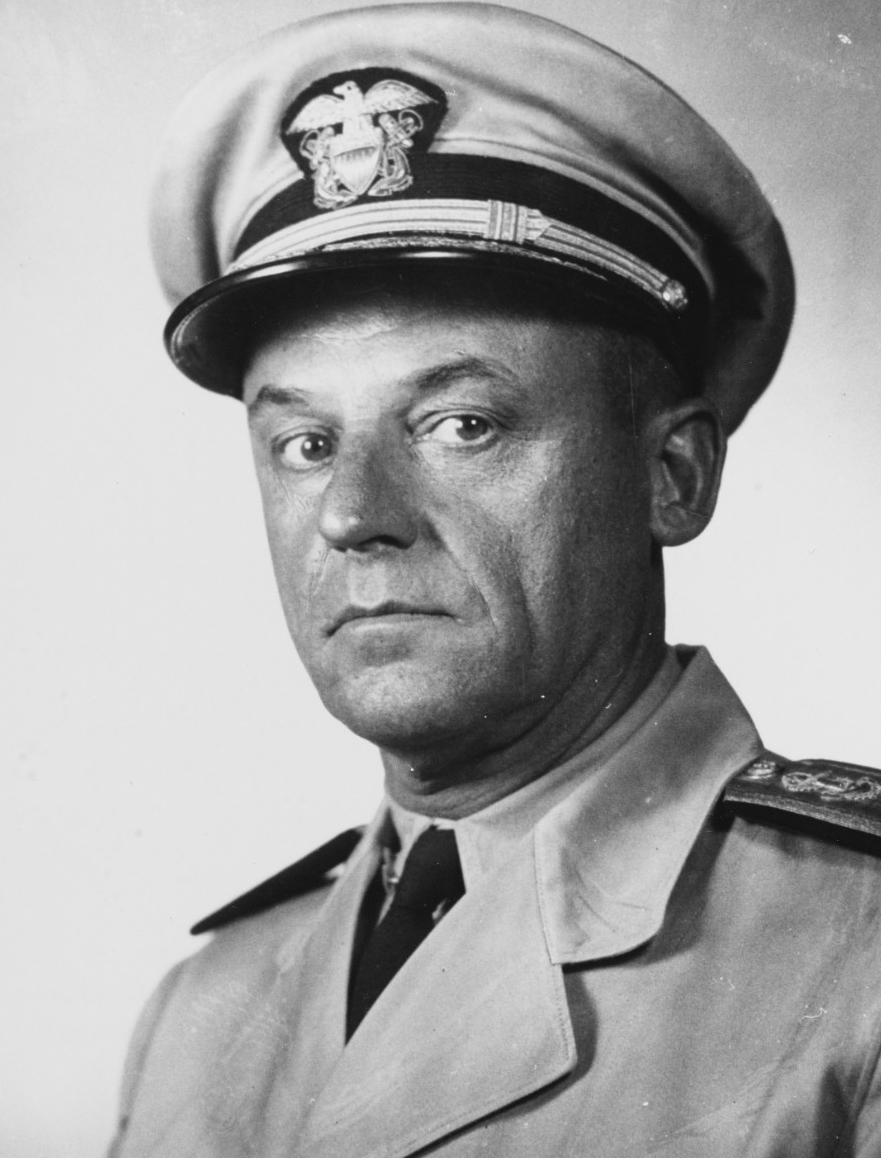 Theodore Edson Chandler entered the U.S. Naval Academy in 1911. He was the son of Rear Admiral Lloyd Horowitz Chandler and grandson of Secretary of the Navy William Eaton Chandler. Chandler lettered in basketball and lacrosse, and graduated high in his class in June 1915. He served his initial tours on battleships Florida (Battleship No. 30) and New Hampshire (Battleship No. 25), and briefly in the armored cruiser Montana (Armored Cruiser No. 13). He was in the commissioning crew of destroyer Conner (Destroyer No. 72), serving aboard her during World War I, based at Brest, France. When the war ended, he became the commissioning executive officer for the destroyer Chandler (DD-206), named for his grandfather, operating in European waters. He then became part of the commissioning crew of battleship West Virginia (BB-48) and then served aboard battleship Colorado (BB-45). In April 1929, he assumed command of destroyer Pope (DD-225) serving with the Yangtze River Patrol in China. From May 1932 to February 1934 he was commanding officer of the destroyer Buchanan (DD-484). In April 1935, he commenced a tour as assistant U.S. Naval attaché to Paris, Madrid, and Lisbon. In June 1938, he was the commissioning executive officer for the light cruiser Nashville (CL-43) until 1940. Finally, apparently in payback for serving on the newest ships in the Navy, he was given command of the oldest light cruiser, USS Omaha (CL-4), in October 1941. As skipper of Omaha, Chandler would receive a Letter of Commendation with Ribbon from the Secretary of the Navy:

Your operations on the occasion of the seizure of the German motorship ODENWALD on 6 November 1941, are noted with great interest. The identification of the ODENWALD by you as a hostile ship, even though disguised as to nationality by the flying of and otherwise subversive use of the United States flag, the subsequent salvage of and the taking into port of the ODENWALD under her own power by the salvage and boarding parties sent by your direction from the Task Group under your command bespeaks of the efficient plans made for such an emergency, and made possible the saving of this ship under the attendant hazardous conditions. You are hereby commended for your initiative and sound judgement on this occasion.

Chandler detached from Omaha on 6 February 1943. As rear admiral, he served as Commander All Forces, Aruba-Curacao, Netherlands West Indies, from April 1943 to July 1944, and was awarded a Legion of Merit. On 31 July 1944, he assumed command of Cruiser Division TWO and participated in the invasion of Southern France (Operation Dragoon) in August 1944. Chandler was subsequently awarded a second Legion of Merit. He then assumed command of Battleship Division TWO during the Battle of Surigao Strait. After he was killed at Lingayen Gulf, he was posthumously awarded a Silver Star for his actions at Surigao Strait:

Silver Star: For conspicuous gallantry and intrepidity as Commander of a Battleship Division in action against major units of the enemy Japanese fleet during the Battle of Surigao Strait in the early hours of 25 October 1944. When a formidable column of Japanese warships entered the narrow confines of the Strait and advanced under the cover of darkness toward our waiting forces, Rear Admiral Chandler, with his division placed among other battleships in the strategic T-formation across the northern end of Surigao, hurled the full power of his heavy guns at the confused enemy force. During the shattering broadsides of his mighty vessels with unrelenting fury, he waged fierce battle against the enemy in a prolonged engagement which resulted in the destruction of two Japanese battleships and three destroyers before effective return fire could be brought to bear on our ships. Subsequently retiring his division unscathed from the action, Rear Admiral Chandler, by his brilliant leadership, outstanding professional skill and indomitable fighting spirit in the face of tremendous odds, contributed materially to the defeat of the enemy in this decisive action and his undaunted courage throughout upheld the highest traditions of the United States Naval Service.

Chandler was posthumously awarded a Navy Cross for his actions at Lingayen Gulf:

Navy Cross: For extraordinary heroism as Commander, Cruiser Division FOUR, in action against Japanese forces in Lingayen Gulf, Philippine Islands, on 6 January 1945. Skillfully coordinating the fire of his division with that of other heavy naval units during the initial bombardment of Luzon prior to scheduled landing operations at Lingayen, Rear Admiral Chandler ordered the smashing broadsides of his powerful guns with unrelenting aggressiveness despite a heavy overcast the reduced visibility and while under persistent attack by enemy aircraft. Observing the progress of operations from an exposed position on the flag bridge when a Japanese suicide bomber attacked and hit his cruiser, setting the flag bridge afire, he emerged from the raging inferno with his clothes ablaze. Determined to remain in action, he steadfastly continued to direct his units until compelled by his Chief of Staff to proceed to the dressing station for treatment of severe burns. Stout-hearted and indomitable in the face of almost certain death, Rear Admiral Chandler succumbed to his injuries the following day. By his inspiring devotion to duty and heroic spirit of self-sacrifice throughout, he enhanced and sustained the highest traditions of the United States Naval Service. He gallantly gave his life in defense of his ship.

Back to H-Gram 040 Overview 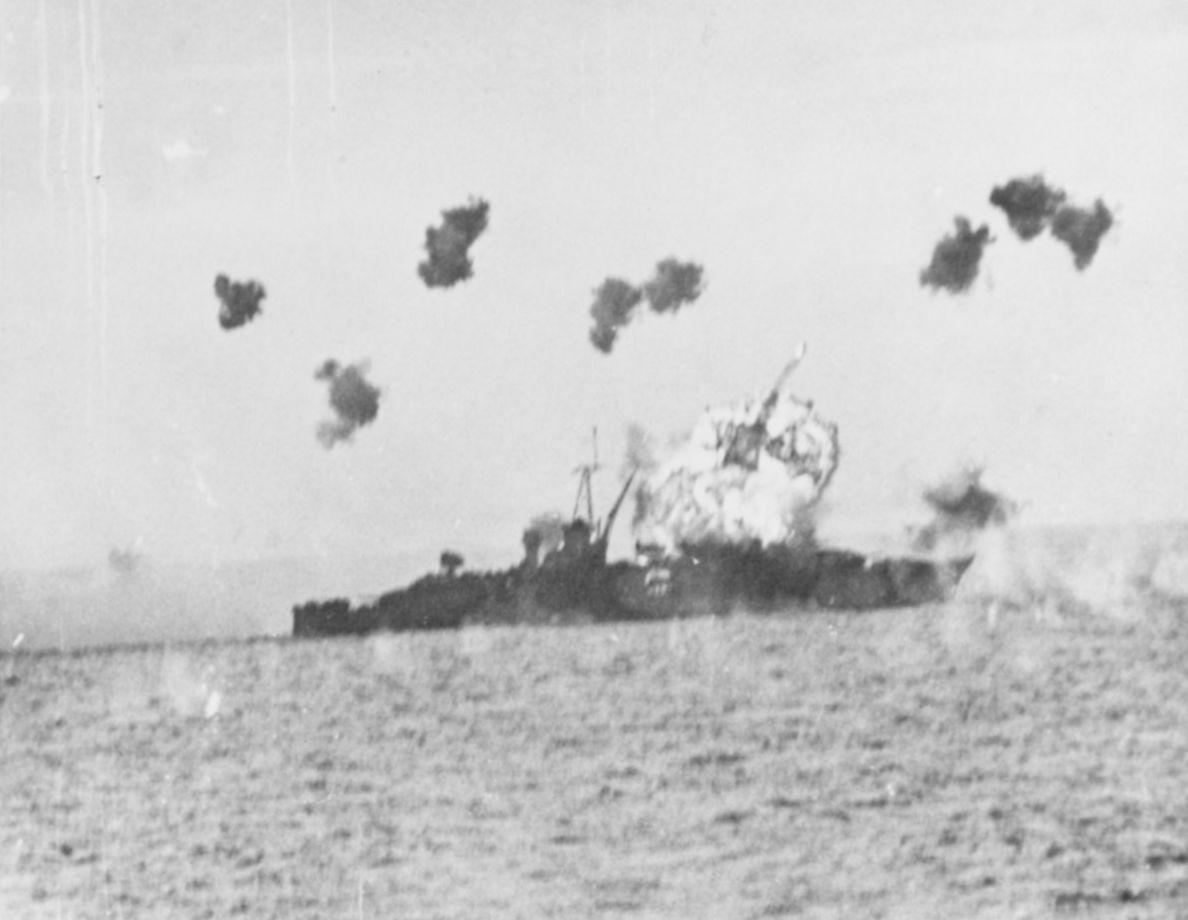