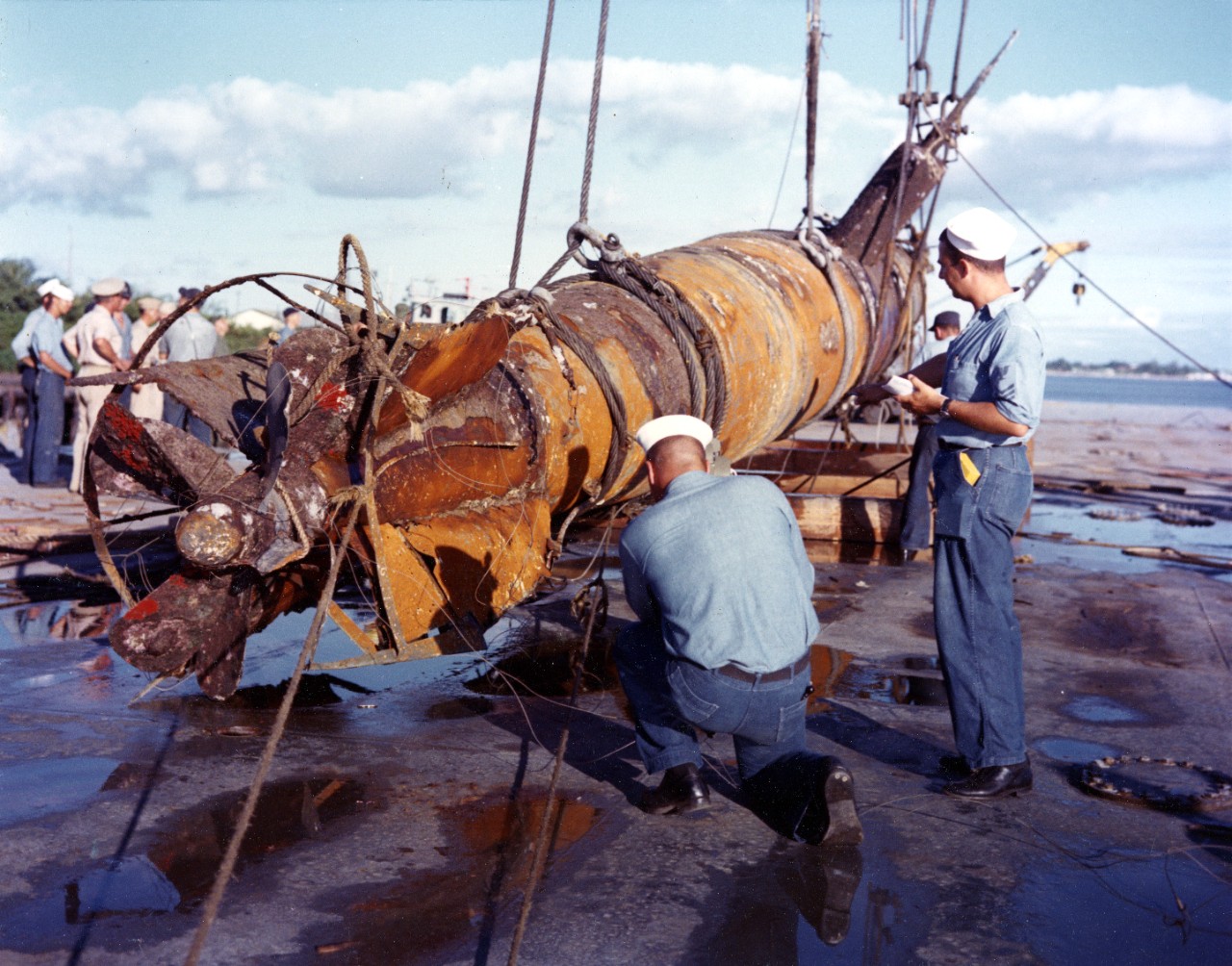 Japanese midget submarine originally launched outside of Pearl Harbor on 7 December 1941 by submarine I-18. Photographed soon after its recovery near the entrance to Pearl Harbor, Hawaii, July 1960. It had apparently been unable to enter the harbor as its torpedoes had not been fired (KN-2589).

LT William Outerbridge was awarded a Navy Cross (his first) for his actions in command of USS Ward on the morning of 7 December 1941.

USS Ward was subsequently converted to a fast transport (APD16), and 4”/50 #3 (which fired the second shot, which hit and sank the Japanese midget submarine) was removed from the ship.  Gun #1, which fired the first shot, remained on board, and is now at the bottom of the ocean off the Philippines.   The #3 Gun was preserved due to its historic significance, and as a result of an intense lobbying effort by the Minnesota congressional delegation was loaned to the state of Minnesota, where most of the enlisted crew came from, where it remains on outdoor display just west of the Veteran’s Services Building in Saint Paul, Minnesota,

On 7 Dec 1944, the Ward was hit by a kamikaze (a twin-engine “Betty” bomber) off the Philippines.  With the fire out-of-control, the crew of Ward was ordered to abandon ship (which they did reluctantly) but the ship did not sink.  The destroyer USS O’Brien (DD-725) was ordered to sink the Ward with gunfire.  The commanding officer of the USS O’Brien was Commander William Outerbridge, former skipper of the Ward.

The Japanese midget-submarine sunk by the Ward, launched from the mother submarine I-20, was one of five that attempted to enter the harbor that morning.  After multiple fruitless searches over the years, the midget submarine (20) was finally found in 2002 by a research team from the University of Hawaii, about three miles outside the 1941 Pearl Harbor restricted zone.  The submarine was resting upright and had no visible damage other than the shell-hole at the base of the conning tower.  Based on the configuration of the dive planes and rudder, the current theory is that the midget sub sank slowly and drifted underwater a considerable distance before settling rather gently onto the bottom at 1300 feet.

Of the five Japanese midget submarines, one definitely made it into the harbor, and a second probably did as well.  The midget launched from I-19 got hopelessly lost and eventually went aground on the east side of Oahu; one of the two crew was captured and became the first Japanese POW of the war; this submarine is now on display at the Museum of the Pacific War in Fredericksburg, Texas.  The midget launched by I-18 was damaged by depth charges and abandoned by its crew; it was recovered from Keehi Lagoon (with its two torpedoes) in 1960 and returned to Japan where it is on display at the Eta Jima naval academy.  The midget launched from I-20 was sunk by the Ward.  The midget launched by I-22 made it into the harbor where it was fired upon by several ships before being rammed, depth charged and sunk by the USS Monaghan (DD-345) the duty destroyer that had gotten underway in reaction to Ward’s report; both torpedoes fired by the midget missed; the remains of the submarine were used as land-fill, and a later attempt to recover the crew abandoned due to toxic residue.

The midget submarine launched by I-16 probably made it into the harbor, although this is not definitive.  The submarine was finally found in 2009, both torpedoes expended, in a debris field off Oahu associated with the 1944 West Loch Disaster (an ammunition handling accident that sank six LST’s and killed 163 naval personnel and that remained classified long after the war.)  The current theory is that she fired her torpedoes at Battleship Row; one of the torpedoes that hit the USS Oklahoma (BB-37) was described as having significantly more explosive force than the others, possibly suggesting a submarine-launched torpedo which was much larger than aerial torpedoes.  The submarine then wound up in West Loch, where the crew used their scuttling charge to sink themselves.   The remains of the submarine were later scooped up with the wreckage from the disaster and dumped off Oahu.  If this theory is true, it leaves unexplained which unit fired two torpedoes reported by the USS St. Louis (CL-49) as she was exiting the harbor just after the attack.  (My theory would be that I-70 was closer to the exit than the 10 miles she was supposed to be, and fired the torpedoes, but as she was subsequently sunk by aircraft from USS Enterprise (CV-6) on 10 Dec with no survivors we will never know.)