A finch whose strongly curved mandibles cross each other. 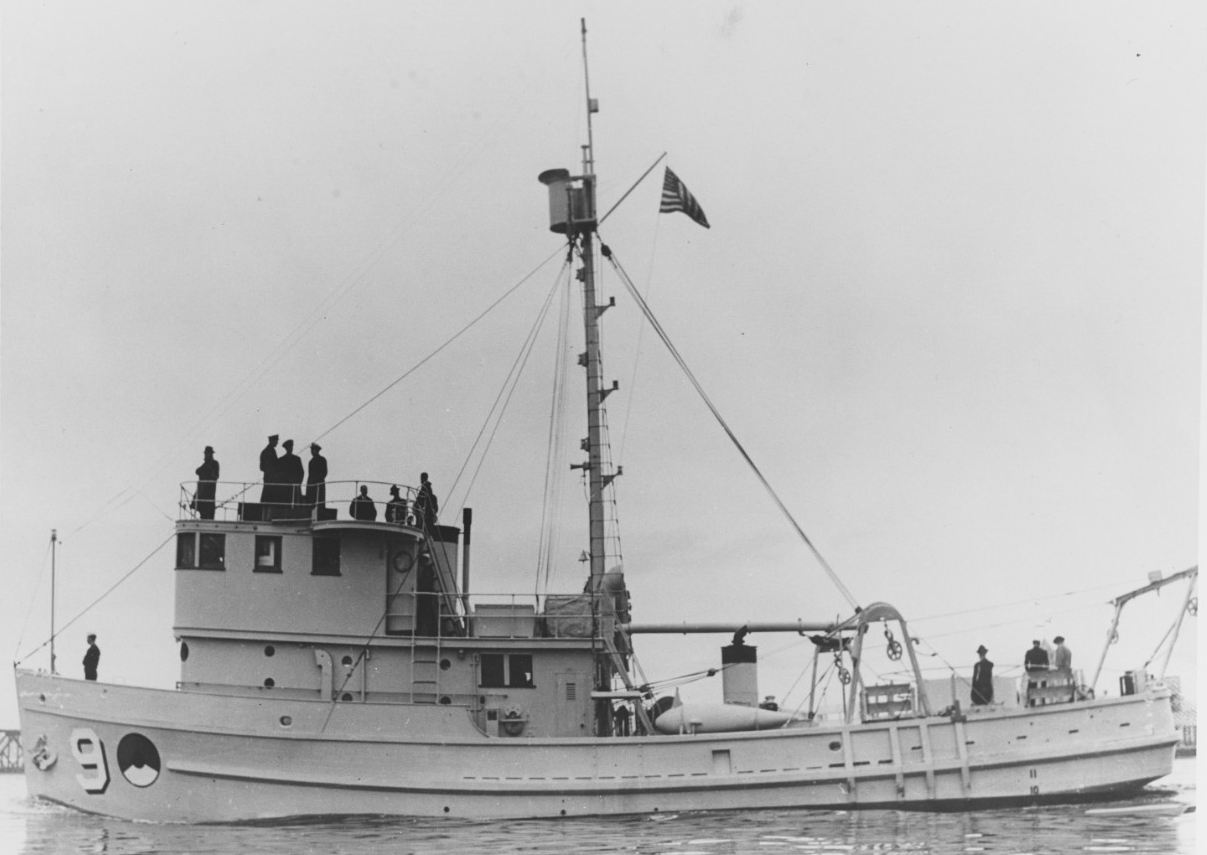 When she entered service, Crossbill lay at San Diego, Calif., initially assigned to the forces of the Eleventh Naval District. Assigned to the Fourteenth Naval District on 1 April 1941, she departed San Diego for Pearl Harbor, Territory of Hawaii (T.H.) on 16 May, in company with other coastal minesweepers and escorted by the oiler Tippecanoe (AO-21) for the passage. They arrived at Pearl Harbor on the 27th. Her primary duty was minesweeping, and for the rest of the year, she embarked for occasional one-day operations combing the waters around the base.

Early in the pre-dawn morning of 7 December 1941, Crossbill set out for a routine minesweeping run alongside Condor (AMc-14). While they found no mines, Condor spied what Ens. Russell G. McCloy, D-V(G), USNR, her executive officer, was certain was the periscope of a submarine. Condor alerted Ward (DD-139), operating on channel entrance patrol, and the destroyer scoured the area. Initially Ward found nothing but remained on alert.

Meanwhile, the minesweepers turned back towards their base. At 0508, Crossbill approached the entrance to the harbor, and guards on station opened the submerged gate intended to keep out submarines. Once Crossbill passed through, regulations stipulated that the sentries on duty promptly close the gate again, but it could take a full ten minutes to reopen, and longstanding practice was to keep it open until all ships had returned. Thus, the harbor entrance remained open when Condor passed through minutes later.

What Condor had spotted was one of five Type “A” midget submarines launched from larger ocean-going boats and deployed to coordinate their attacks with the two waves of planes sent to attack the U.S. Pacific Fleet and nearby naval and military bases. Ward went on to attack a Type A midget and sink it with gunfire and depth charges, reporting the incident to Fourteenth Naval District headquarters. Delays in seeking confirmation and a reluctance to heed the warning, however, resulted in the message’s slow transmission through tortuously slow communication channels.

Crossbill’s crew learned of the attack at 0753 when they saw Japanese planes bombing Hickam Field, and immediately opened fire, expending 236 rounds of ammunition, but did not record any hits. The ship suffered no damage in the attack, nor were any of her sailors wounded. Later that day, as the reality of the devastating attack and the long war that it portended sank in on the nation, the men of Crossbill soon began the first of many local minesweeping operations that they would carry out in the months and years to come.

Crossbill and her sisters operated locally in Hawaiian waters for the duration of the war. During the course of hostilities, she rotated between Oahu – Pearl Harbor, Bishops Point, and Honolulu – and Kauai (Port Allen), a regimen punctuated by one, sadly unsuccessful, search for down airmen in company with the tug (ex-minesweeper) Vireo (AT-144) (23–24 April 1942), as well as the exercises that were part and parcel of shipboard routine – fire drill, collision drill, and man overboard drill – and shore leave with its occasional excesses, the most serious of which for Crossbill came to light on 1 September 1945 when members of the Honolulu Police Department came on board with a warrant for the arrest of one of the ship’s company on charges of burglary.

Crossbill’s final deck log entry is dated 30 September 1945. With the war over, she sat idly at Pearl Harbor for the next four months. She was officially placed out of service on 15 January 1946 and stricken from the Navy Register on 7 February, and ultimately transferred to the Maritime Commission for disposal on 25 March 1947.