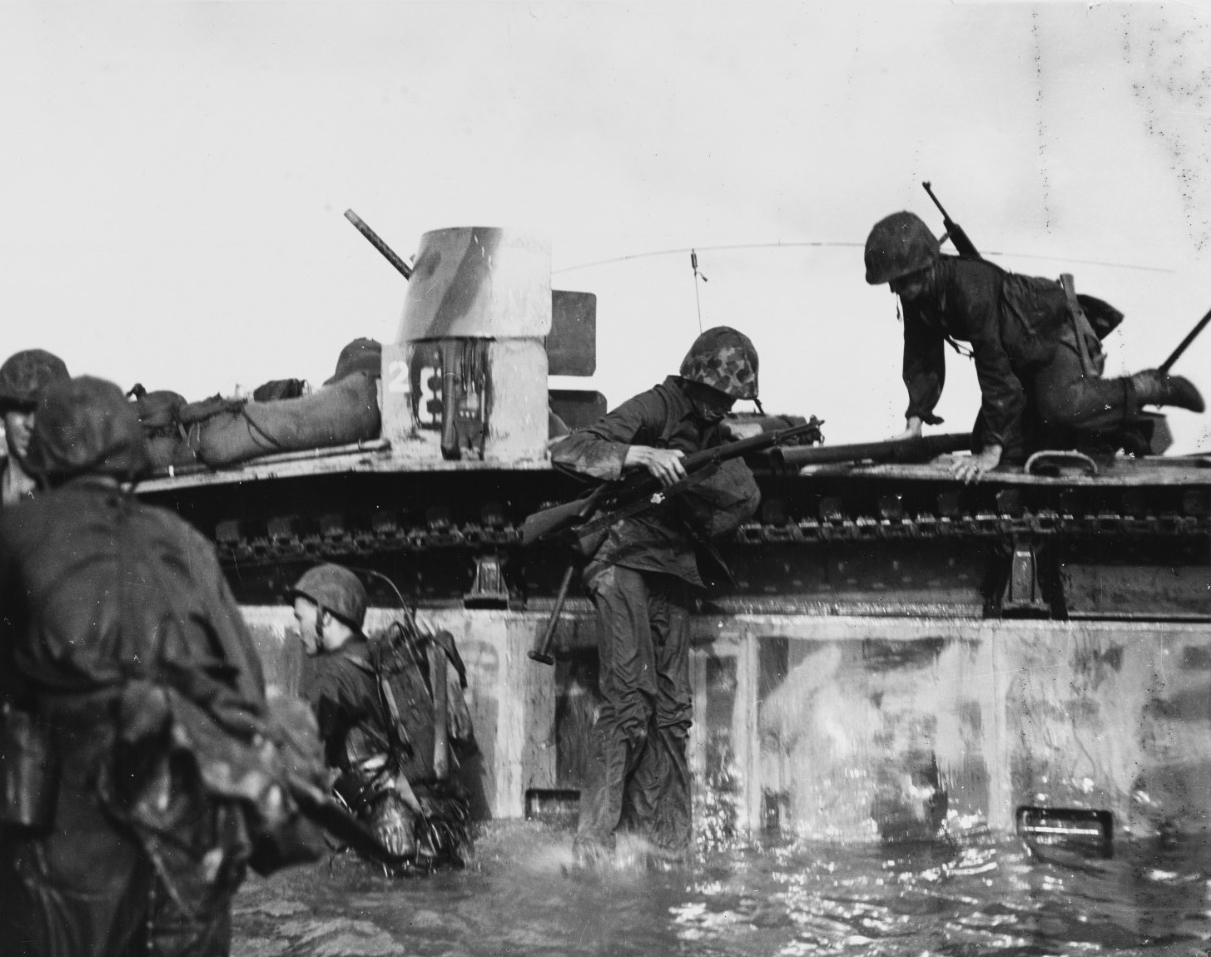 (See H-Gram 032 for the background of Operation Forager, the invasion of the Marianas)

The U.S. landings on the island of Tinian were planned as a follow-on to the landings on Saipan, using the same forces, but were delayed due to the intense Japanese resistance on Saipan, as well as the sortie of the Japanese Combined Fleet resulting in the Battle of the Philippine Sea (see H-Gram 032). Following the defeat of the massive Japanese banzai suicide charge on Saipan on 7 July (the largest of the entire war), U.S. forces gained effective control of the island by 9 July, although mopping up pockets of resistance took until September and, even then, some die-hards refused to give up. The 2nd and 4th Marine Divisions on Saipan regrouped and prepared to assault Tinian, which was only a few miles away (the northern end of Tinian was within artillery range of Saipan).

There were about 8,000 Japanese defenders on Tinian, most belonging to the 50th Infantry Regiment under the command of a colonel. Vice Admiral Kakuji Kakuta, commander of the 1st Air Fleet, was the senior Japanese officer on the island, having been there on an inspection visit and stuck when the U.S. invasion of the Marianas commenced, but he was not responsible for the defense (and probably committed suicide when the landings on Tinian commenced, although his body was never found). Tinian was substantially smaller than Saipan and much less hilly (ideal for large airfields), although it was ringed most of the way around by 15-foot cliffs, with few decent landing beaches. There were about 15,700 civilians on the island, mostly Japanese, but some ethnic Koreans. As on Saipan, many of the civilians (4,000) would commit suicide.

The best, but most obvious, beaches, were on the southwestern side of Tinian, near Tinian Town, which was where the Japanese expected the attack to occur. There were small beaches on the northwestern and northeastern side of the island, which would severely constrain the size of the initial landing waves, and force follow-on waves through a funnel, and would require considerable ingenuity to get sizable forces ashore in a timely manner. The initial assault wave at Saipan was about 96 landing craft abreast, whereas the beaches at Tinian could only support about 8 abreast, or up to 16 with specially built ramps. What the northern beaches did have was the advantage of surprise. After reconnaissance by underwater demolition teams, the northwestern (White) beaches were selected.

Naval shore bombardment of Tinian commenced on 16 July, by 3 battleships, 5 cruisers and 16 destroyers, much of it focused on the southwestern side as a deception in order to reinforce the Japanese perception that the assault would take place there. The island was also worked over by long-range land-based bombers, Navy aircraft from the escort carriers, and U.S. Army Air Force P-47 Thunderbolt fighters, delivered to Saipan by escort carrier, flying from the former Japanese Aslito airfield, and also introducing a new weapon—napalm bombs.

The initial landings by the 4th Marine Division on the White beaches on 24 July 1944 went very well, supported by naval bombardment and Army artillery firing across the strait from Saipan. However, the shore bombardment supporting the deception operation on the southwest side suffered the most serious casualties from Japanese shore batteries of any such operation during the war. Three 6-inch guns (taken by the Japanese from British defenses of Singapore) were well hidden in caves, and escaped destruction by the shore bombardment. At 0740, these guns found the range on the battleship Colorado (BB-45), which was bombarding the island from 3,000 yards offshore. 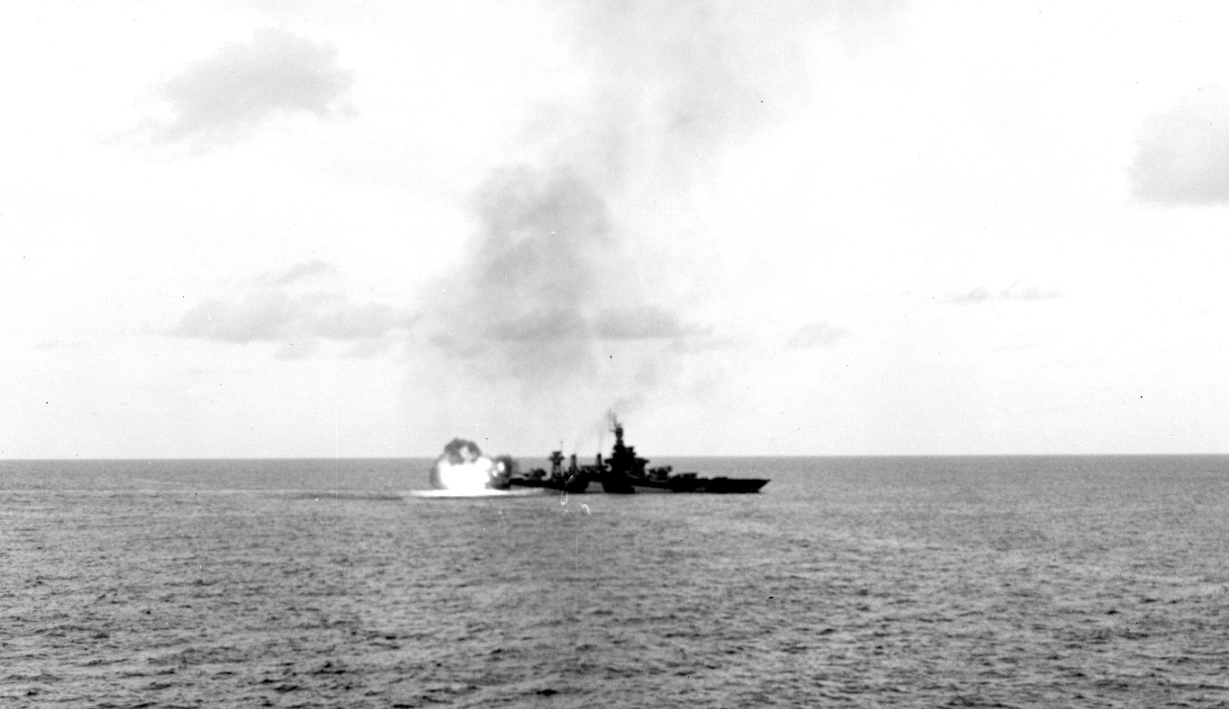 The destroyer Norman Scott (DD-690), 1,800 yards offshore, maneuvered to draw fire away from Colorado and was hit six times by 6-inch shells in 15 minutes. One shell was a direct hit on the bridge, which killed the commanding officer, Commander Seymore D. Owens, the officer of the deck, and the rest of the bridge team. The shells killed 22 men and wounded 50 more, including seriously wounding the executive officer. The hits also knocked out one 5-inch gun, one 40-mm mount, and caused extensive damage throughout the ship. Ammunition aboard the ship exploded over the course of several hours.

Command of Norman Scott fell temporarily to Lieutenant Junior Grade Will C. Jumper, who conned the ship, steering with engines, while Norman Scott’s four remaining 5-inch guns continued to fire on targets ashore in local control. Owens was awarded a posthumous Navy Cross for his actions. The Gearing-class destroyer USS Seymour D. Owens (DD-767) was named in his honor; however, that ship was never completed. (I could not find if Jumper received an award, but he wrote poetry and became a professor emeritus of literature and one of his students became poet laureate of the United States.)

Colorado (BB-45), 3,000 yards offshore, fared worse: She was hit 22 times in quick succession by 6-inch shells from the hidden Japanese battery. Although the 6-inch guns were unable to penetrate Colorado’s armored vitals, the effects topside were severe among the anti-aircraft guns, with 43 crewmen killed and 198 wounded (97 requiring hospitalization) and seven anti-aircraft guns were knocked out. In December 1941, Colorado had been in Bremerton undergoing overhaul and had missed the Japanese attack on Pearl Harbor. As a result, she had not received as much of the modernization and upgrades as her sisters that had been sunk, damaged, raised, and repaired following Pearl Harbor, and she still had open-mount 5-inch guns in her secondary battery. Shrapnel from the shells and Colorado’s own anti-aircraft ammunition sprayed shrapnel everywhere. Rear Admiral Theodore Ruddock and Captain William Granat were lightly wounded, but far worse was the sheer carnage on her topside decks. Many Sailors and some Marines were so badly mangled they could not be identified.

Despite the grievous, yet essentially superficial, damage, Colorado identified the offending battery and fired on it, along with light cruiser Cleveland (CL-55) (with her rapid-fire 6-inch guns) and the destroyer Remey (DD-688), and silenced it. However, the battery was not completely put out of action until 28 July, when Pearl Harbor survivor battleship Tennessee (BB-43) worked it over with 70 14-inch and 150 5-inch shells.

Despite the damage, the deception effort worked, and the landings on the northwest coast of Tinian went well. Naval gunfire support was consistently rated as excellent, as 41,000 Marines took the island from the 8,000 Japanese defenders, of which only about 250 would be taken alive. In the nine days it took to capture the island, the Marine Corps and U.S. Navy suffered 389 killed and just over 1,800 wounded. Seabees quickly upgraded the existing Japanese airfields and built new ones, and then waited for the B-29 Superfortresses to show up. Tinian would become the busiest bomber base in the Pacific war, and would be the point of departure for the B-29s that dropped the two atomic bombs on Japan in August 1945.

Although Colorado had a stroke of luck in missing the Japanese attack on Pearl Harbor, she would pay for it during the war, suffering the most battle damage amongst the pre-war U.S. battleships (not counting Pearl Harbor). Only the new battleship South Dakota (BB-57) suffered comparable damage, much more than any other new U.S. battleship in the war, several of which made it through the conflict with no casualties at all. Colorado earned seven battle stars during the war. In addition to the 43 killed and 198 wounded at Tinian, Colorado would be hit by two kamikaze aircraft off Leyte (19 killed, 72 wounded) and, at Lingayen Gulf, she was hit by “friendly fire” (18 killed, 51 wounded).

By comparison, South Dakota, which earned 13 battle stars, was hit by a bomb and strafed by fighters at the Battle of Santa Cruz. These attacks did little damage, but killed 2 and wounded 60, including the commanding officer. At the Battle of Guadalcanal on 14–15 November 1942, South Dakota was hit by 27 shells, with 40 killed and 180 wounded. The battleship later had one man washed overboard and another killed by friendly fire before she was hit by another bomb at the Battle of the Philippine Sea, which killed 26 and wounded 27 (by far the worst bomb hit of the battle). In late 1945, South Dakota suffered an accidental explosion while loading ammunition, necessitating the flooding of a magazine to prevent a catastrophic event. This resulted in the deaths of 11 and injury to 24. Why the South Dakota and Colorado suffered more than any other battleships after Pearl Harbor was purely a matter of chance.