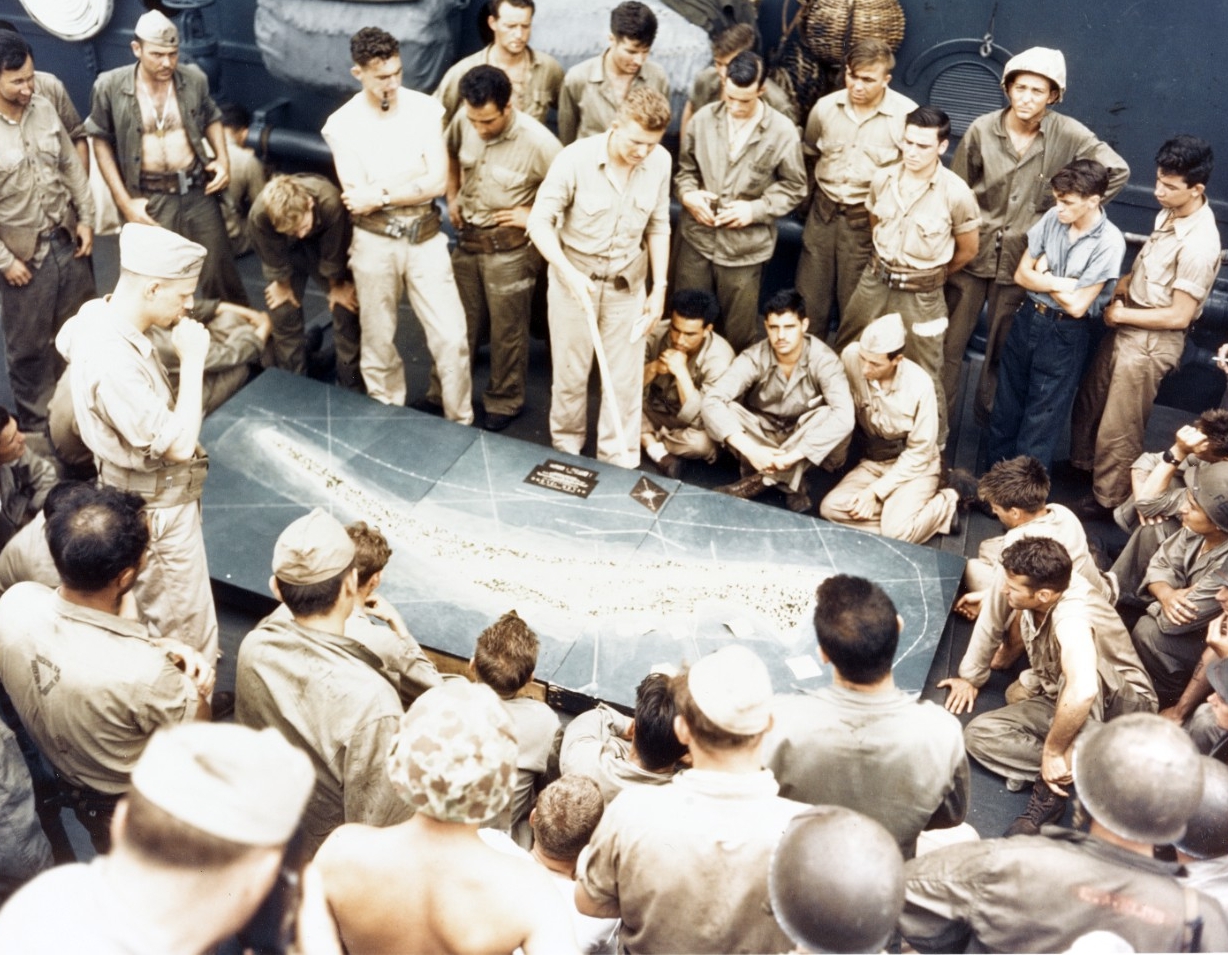 This H-gram covers Operation Galvanic (the U.S. invasion of Tarawa and Makin in the Gilbert Islands in November 1943), as well as the USS Enterprise (CVAN-65) conflagration in January 1969, and wraps up the USS Pueblo (AGER-2) event with the release of her surviving crewmen in December 1968. Back Issues of H-grams (enhanced with photos and charts) can be found here. Download a PDF of H-Gram 025 (4.6 MB).

Operation Galvanic: The Invasion of Tarawa and Makin Islands, November 1943

On 24 November 1943, a torpedo from Japanese submarine I-175 struck the U.S. escort carrier Liscome Bay (CVE-65) and detonated her bomb-stowage magazine. This obliterated the after third of the ship in a massive explosion that showered the battleship New Mexico (BB-40) 1,500 yards away with metal, burning cloth and body parts, and sprayed shrapnel up to 5,000 yards away. Over 642 crewmen were lost along with Liscome Bay, which suffered proportionately the highest number of casualties (70 percent) of any U.S. aircraft carrier in the war. When added to the 43 killed in the turret explosion on the battleship Mississippi (BB-41), 82 lost in the sinking of the submarine Corvina (SS-226), 63 lost in the sinking of the submarine Sculpin (SS-191), 17 in the torpedo hit on the light carrier USS Independence (CVL-22), plus aircrew losses, Operation Galvanic cost the U.S. Navy over 900 killed. Although the sacrifice of about 1,000 Marines during the bloody capture of Tarawa is rightly venerated by the U.S. Marine Corps, the high cost incurred by the Navy to prevent Japanese counter-attack is much less well known.

Included in the Navy casualties aboard ship, submarine and in the air were:

Although the Japanese proved during Operational Galvanic that they were still capable of inflicting painful losses, they were about to get hit by the tsunami of American industrial might that the deceased commander in chief of the Japanese Combined Fleet, Admiral Isoroku Yamamoto had warned Japanese leaders about in vain before the war. The strategic situation at the end of 1943 was vastly different than the end of 1942, when there were periods when the U.S. Navy was down to one operational (but damaged) aircraft carrier in the Pacific. However, between Pearl Harbor and the end of 1943, the U.S. Navy commissioned seven Essex-class fleet carriers (90 aircraft each) and nine Independence-class light carriers (45 aircraft each) equipped with the new F6F Hellcat fighter, more capable than anything the Japanese had. (By contrast, the Japanese would only complete one fleet carrier by mid-1944.) In addition, new U.S. carriers and warships of all types were equipped with increasingly advanced technology, particularly in combat information centers, radar and anti-aircraft defense, as well as a plethora of new types of amphibious assault ships and craft, and ships for mobile sea basing and repair. (For more on Operation Galvanic, please see attachment H-025-1.)

On 14 January 1969, while conducting an operational readiness inspection (ORI) off Hawaii in preparation for a Vietnam deployment, the nuclear-powered aircraft carrier Enterprise suffered a severe fire that killed 28 crewmen, injured 314, and destroyed 15 aircraft. The accident was caused when hot exhaust from an aircraft starter (“huffer”) triggered the explosion of a Zuni rocket uploaded on a F-4J Phantom II fighter, which then ignited a massive fire and multiple secondary explosions. Despite the damage and casualties, lessons learned and implemented from the 1967 USS Forrestal (CVA-59) fire (see H-Gram 008) prevented the Enterprise fire from being even worse. The fire was extinguished in four hours, and, on 1 March 1969, Enterprise was able to proceed with her deployment, at a repair cost of $126 million. (For more on the USS Enterprise conflagration, please see attachment H-025-2.)

After 11 months of brutal captivity and frustrating negotiations, the North Koreans finally released the surviving crewmen of Pueblo, captured by the North Koreans while conducting an intelligence collection mission in international waters off the east coast of North Korea. Although the events surrounding the capture of Pueblo remain the subject of emotional debate even today, what is not in dispute is that Commander Bucher demonstrated exceptional leadership during captivity and that his crew conducted themselves well in accordance with the spirit of the Code of Conduct (despite the fact that the North Koreans, having captured the ship, along with classified material and personnel files, and with a demonstrated willingness to use torture, had the crew at a severe disadvantage.) Several of the crewmen offered particularly noteworthy resistance, and were awarded one Navy Cross, two Silver Stars, and six Bronze Stars with Combat V. In my last H-gram I said I would include the text of Commander Bucher's "Final Confession" that he signed under duress, and which is one of the most incredible documents I have read—and that I am surprised did not get him killed by the North Koreans (who apparently had lousy translators, a mistake that future enemies are not likely to make). (For more on the capture of the USS Pueblo, please see H-Gram 014, and for more on the release of the crew, please see attachment H-025-3.)