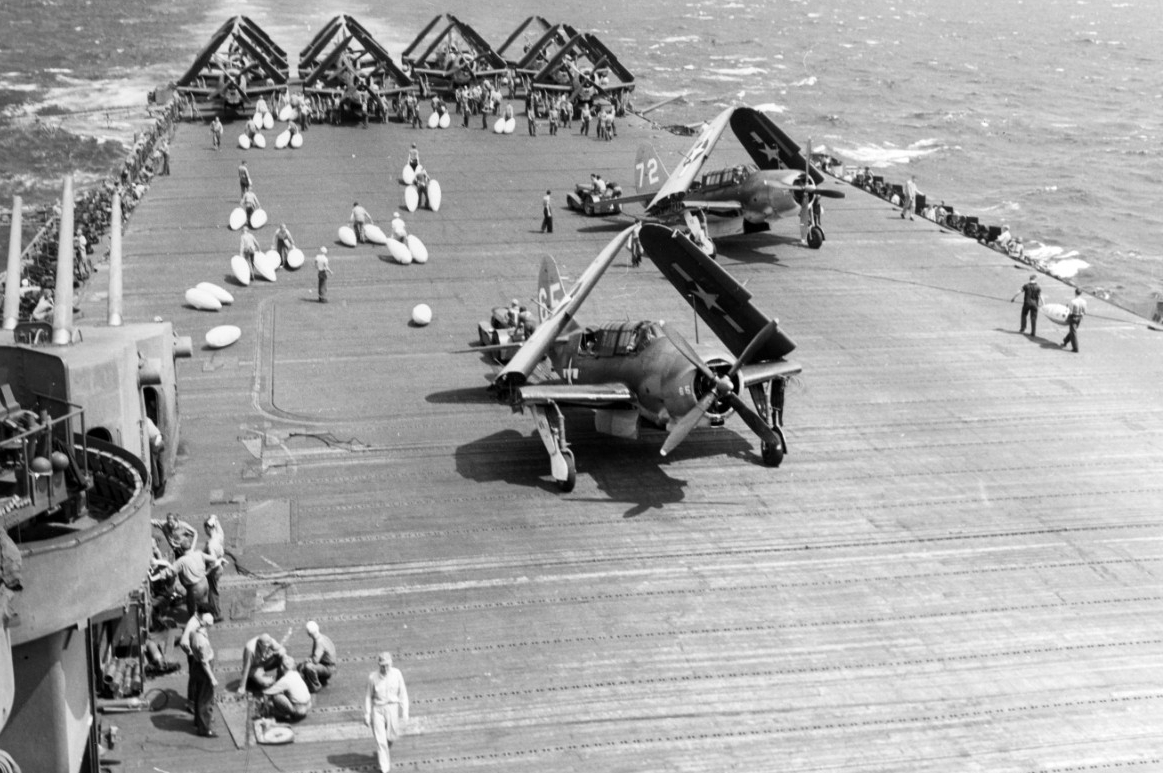 In H-Gram 036, I described the incredibly heroic action of “Taffy 3” during the Battle off Samar on 25 October 1944 and its relation to the theme “No Higher Honor” that former CNO Admiral Richardson chose for this year’s Navy Birthday. I had hoped to get a more complete treatment of the overarching Battle of Leyte Gulf (of which the Battle off Samar was a part) on the wire before the anniversary of the battle, but I got sidetracked by the Battle of Midway movie H-gram and way too many Flag Officer Passing Notes (and the fact I actually have a day job). H-Gram 036 may be reviewed here.

As an update to the H-gram on Samar, the private research vessel Petrel (with which Naval History and Heritage Command has a strong collaborative relationship) announced late last month that they found the wreck of USS Johnston (DD-557) off Samar. Earlier this year, when I was aboard Petrel on the search for USS Wasp (CV-7), Petrel’s mission director, Rob Kraft, asked me what ship I would want to find the most. My answer was Johnston, and the rest of Taffy 3, because in my view the actions of Commander Ernest Evans and the crew of Johnston were arguably the most heroic in the history of the U.S. Navy (although there are numerous worthy contenders).

I believe Petrel is probably correct in the identification as Johnston, but the ship essentially disintegrated on the way to the bottom (at 20,400 feet, the deepest shipwreck ever found), and distinguishing between Fletcher-class destroyers Johnston and Hoel (DD-533) is extremely difficult. By position, the wreck is a better match for Johnston, but there are some features in the debris that were known to be on Hoel and only possibly on Johnston. So, NHHC’s underwater archaeologists aren’t prepared to make a definitive identification quite yet. In a way, I find the ambiguity fitting, as the valor displayed by the crew of Hoel in this action met the definition of “above and beyond the call of duty,” too. Also, based on Petrel’s search off Samar, Gambier Bay (CVE-73), Samuel B. Roberts (DE-413), and one of the two Fletchers (Johnston or Hoel) are in even deeper water, which exceeds even Petrel’s capability.

In this H-gram, I feature the work of one of NHHC’s great professional historians, Martin Waldman, who provides an excellent overview of the battle (which, given its scope and complexity, still comes in at 26 pages when printed out.) Please see Marty’s work here.

My piece will focus more on valor and command decisions, with intent to be relatively short, although I will probably fail in that, too. I also include two items generally not mentioned in histories of Leyte Gulf, but that are related. One is the loss of USS Tang (SS-306) near Formosa while attacking a Japanese Leyte-bound convoy on the night of 23–24 October 1944. Tang was by some measures the most successful U.S. submarine of the war, and her skipper, the legendary Dick O’Kane, who as commanding officer of Tang and executive officer of Wahoo (SS-238—under the legendary “Mush” Morton), had a hand in sinking more ships than any other U.S. submarine officer. Ironically and tragically, Tang was sunk by her own circular-running torpedo (the last of 24 fired in a war patrol that earned O’Kane the Medal of Honor). Only nine of her crew, including O’Kane, survived to be captured by the Japanese. Five of the survivors made the only known successful ascent from a sunken submarine using the Momsen Lung (several others from Tang made a successful ascent, but were not rescued).

The other item is the great tragedy of Arisan Maru, which was torpedoed and sunk by a U.S. submarine (probably Shark—SS-314), which resulted in the loss of 1,781 prisoners of war (almost all American), who were being transported in hellish conditions from POW camps in the Philippines to Formosa and then to Japan and Japanese-occupied China. Almost all the U.S. POWs survived the sinking, but none was rescued by the Japanese (who did rescue most of Arisan Maru’s crew.) Ultimately, only nine U.S. POWs survived. This was the greatest U.S. loss of life at sea (exceeding that of MT Rohna—see H-Gram 022—to which I should have caveated “due to enemy action”; I originally noted that Rohna was the greatest loss of U.S. military life at sea). Shark was sunk by the convoy’s escorts and lost with all hands shortly thereafter.

Both Vice Admiral Kurita and Admiral Halsey would come in for intense criticism over the years for their actions during the Battle of Leyte Gulf. As a former flag officer myself, I may have more sympathy than historians, knowing what it is like to make rapid decisions with incomplete (or even deceptive) information and then be second-guessed by omniscient after-the-fact knowledge. Whatever Halsey’s faults during the battle (and even then he only did what decades of doctrine and training expected: aggressive attack on the enemy fleet), he deserves a great deal of credit for the success of the battle. His recommendation to accelerate the invasion of Leyte caught the Japanese before they were ready, and his brilliantly executed attacks on Okinawa and Formosa cost the Japanese critical air assets that might have made the Leyte landings far more costly.

For his part, Kurita has gone down in history as having snatched defeat from the jaws of victory, thanks to the heroic fight put up by Taffy 3. In reality, had he gotten into Leyte Gulf, he might have sunk 20 or so transports (since most of the 200 that had been there at the start of the landings were already gone). It would have been ugly, but would not have changed the outcome of the battle or the war, and his force would have been annihilated by Halsey’s aircraft before they could have escaped. Although he later blamed exhaustion for his decision, it is almost certain that Kurita knew from the outset that his mission was doomed. His decision to withdraw ultimately probably saved over 10,000 Japanese lives, for which he was never given any credit.