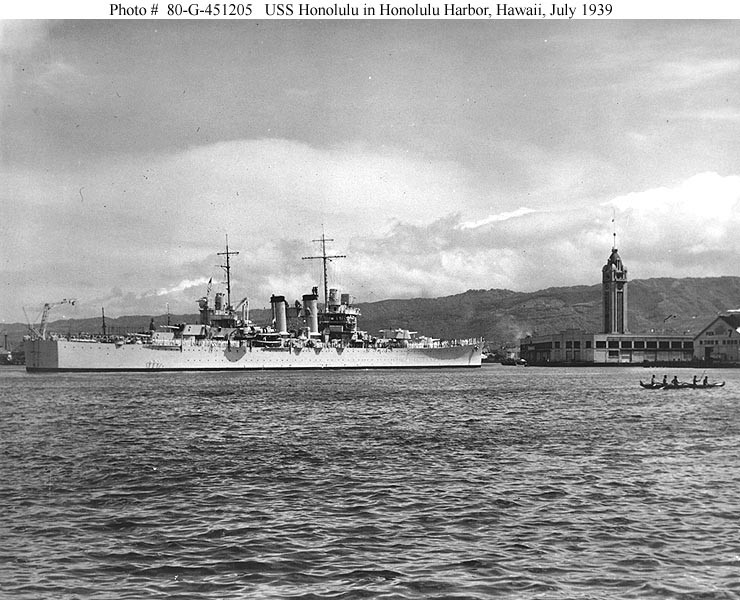 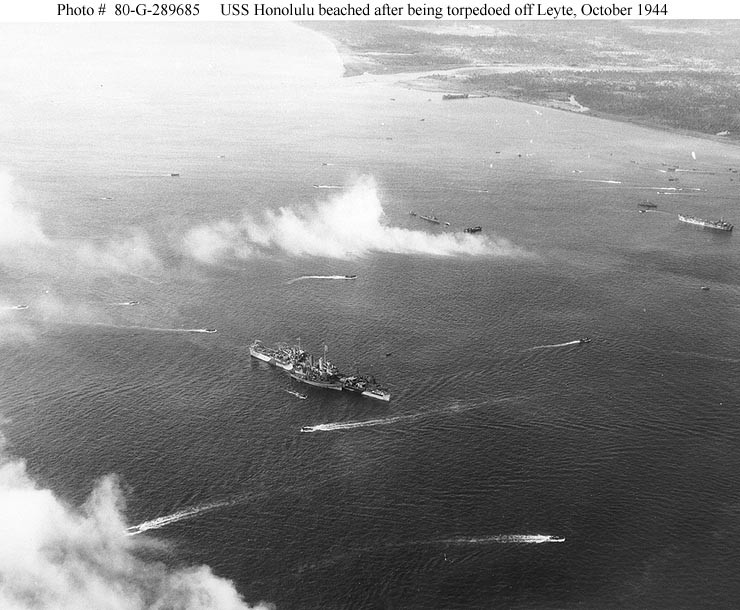 The capital of Hawaii.

The second Honolulu (CL-48) was laid down on 10 September 1935 by the New York Navy Yard; launched on 26 August 1937; sponsored by Miss Helen Poindexter, daughter of the Governor of Hawaii; and commissioned on 15 June 1938, Captain Oscar Smith in command.

After a shakedown cruise to England Honolulu engaged in fleet problems and exercises in the Caribbean . She sailed from New York on 24 May 1939 to join the Pacific fleet, arriving San Pedro, Calif., on 14 June.

For the remainder of the year 1939 she engaged in exercises along the West Coast. During the first half of 1940, Honolulu continued operations out of Long Beach and after overhaul at Puget Sound, sailed 5 November for duty out of Pearl Harbor. She operated there through 1941 and was moored at the Naval Station when the Japanese launched their surprise attack on 7 December 1941. Honolulu suffered only minor hull damage from a near miss. Following repairs she sailed 12 January 1942 to escort a convoy to San Francisco, arriving 21 January. The cruiser continued convoy escort duty to Australia, Samoa, and the United States until late May.

With the Japanese pushing north toward the Alaskan peninsula, Honolulu departed 29 May to strengthen America's position in that area. After 2 months of continuous operations out of Kodiak, she proceeded to Kiska Island in the Aleutians 7 August, to begin bombardment of the island. On 21 August, she screened the first American landings in the Aleutians at Adak Island (a jumping-off place for future landings in the island chain). After a yard period at Mare Island , Honolulu departed San Francisco 3 November escorting a convoy to Noumea . Later that month Honolulu sailed from Espiritu Santo to intercept an enemy convoy attempting to reinforce positions on Guadalcanal . The Battle of Tassafaronga began shortly before midnight 30 November, continuing through the night Although Admiral Wright's Task Force 67 suffered damage to cruisers Minneapolis, New Orleans, and Pensacola and lost Northampton in this battle, the enemy was denied the planned reinforcement of Guadalcanal.

Honolulu operated out of Espiritu Santo in early 1943 with Task Force 67 in an attempt to engage the "Tokyo Express." During May she engaged in heavy bombardment on New Georgia in the Solomon Islands. Honolulu departed Espiritu Santo 28 June for more bombardment of the Solomons. After supporting the landings on New Georgia on the 4th of July, she opened fire on enemy ships in the vicinity of Kula Gulf , knocking out one destroyer and assisting in the destruction of others.

The battle-proved cruiser had another opportunity to damage the Japanese fleet 13 July in the Battle of Kolombangara. Shortly after midnight contact was made with an enemy cruiser-destroyer force in the "Slot." At 0110, Honolulu opened fire on a Sendai class cruiser; after three salvos the target burst into flame and was soon dead in the water. Honolulu then shifted fire on an enemy destroyer, which was immediately hit and disappeared. At 0211, a torpedo very near the surface struck the starboard side of Honolulu , causing hull damage. The task force then retired to Tulagi for temporary repairs, and on 16 August Honolulu arrived Pearl Harbor for overhaul.

After additional repairs at Mare Island, Honolulu departed San Francisco 17 November to continue her effective role in the struggle against Japan. She arrived Espiritu Santo 11 December, resuming operations in the Solomons later that month. On 27 December she engaged in the bombardment of an enemy barge, troop, and supply concentration on Bougainville Island . In the early months of 1944 the cruiser continued bombardment and patrol of the Solomon Islands. She screened the landings off Green Island 13 February before retiring to begin preparations for the Saipan and Guam operations.

Honolulu took part in bombardment of the southeastern part of Saipan in early June as the American Navy drove steadily across the Pacific. While bombarding Guam in mid-June, Honolulu was deployed north to intercept the Japanese fleet. She returned to Eniwetok 28 June for replenishment before providing support for the invasion of Guam. She remained on station for 3 weeks performing great service with her accurate gunfire before returning to Purvis Bay, Florida Island, 18 August. Honolulu sailed 6 September to provide fire support for the landings on Palau Island , remaining in this area during September uncontested by the Japanese fleet. America now had decisive command of the sea and therefore full freedom of operations.

Honolulu departed the staging area at Manus Island 12 October and sailed for the Philippine Islands invasion. She began bombardment 19 October at Leyte Gulf and the next day began screening the landings. At 1600, 20 October an enemy torpedo plane was sighted as it aimed its torpedo at Honolulu . Despite the skillful maneuvering of Captain Thurber to evade, the torpedo found its mark on the port side.

Honolulu sailed the next day, arrived Manus 29 October for temporary repairs, sailed for Norfolk 19 November, arriving 20 December via Pearl Harbor and San Diego. Honolulu remained at Norfolk for the duration of the war undergoing repairs and after a shakedown cruise in October 1945, sailed to Newport for duty as a training ship. Honolulu arrived at Philadelphia on 8 January 1946 and decommissioned there on 3 February 1947 and joined the Reserve Fleet at Philadelphia.

On 1 March 1959, Honolulu was stricken from the Naval Vessel Register; on 17 November 1959, she was sold to Bethlehem Steel Co. for scrap.