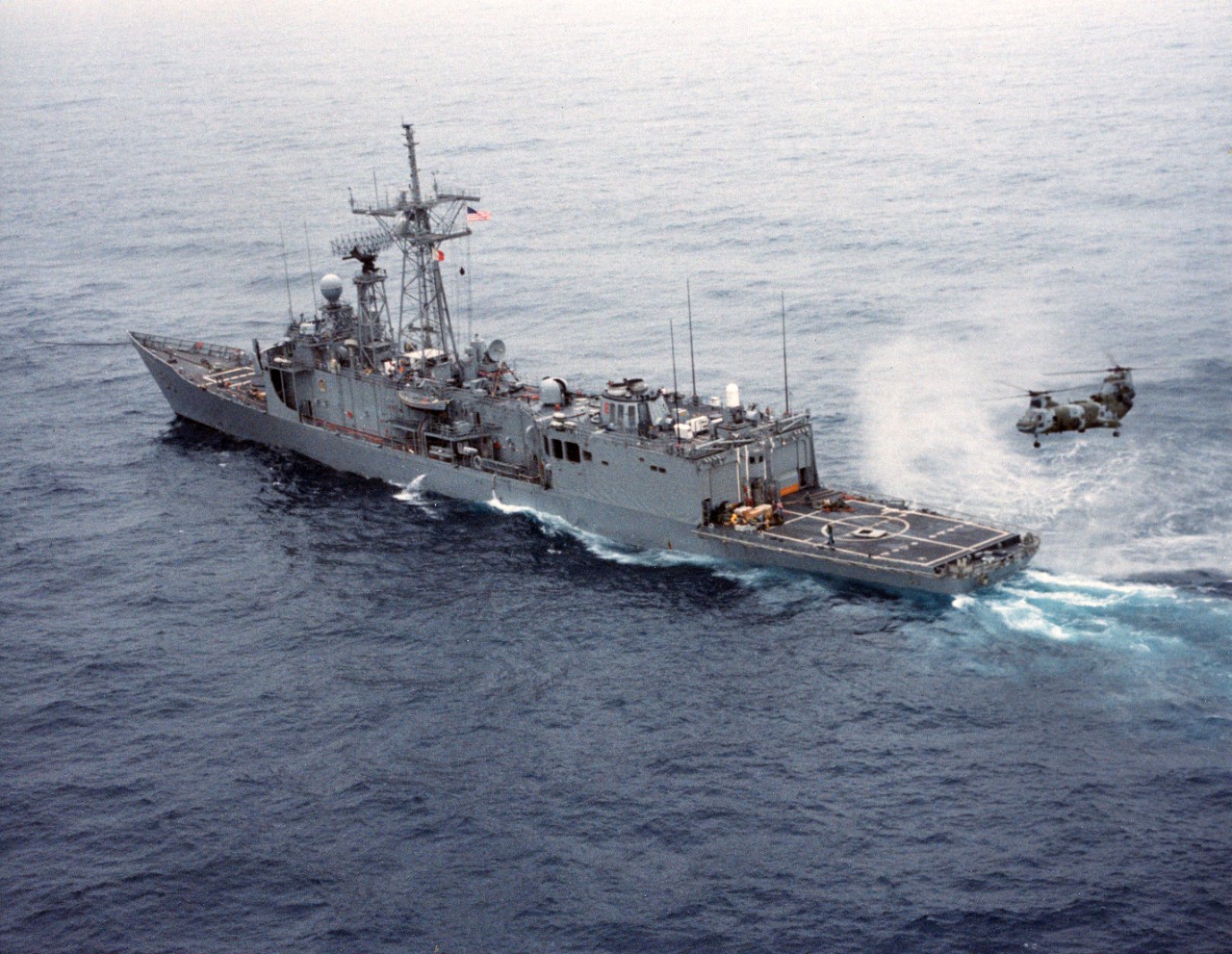 Due to recent events in the Middle East, I received several requests to reprise the H-gram pieces on the Iran-Iraq “Tanker War,” which occurred between 1981 and 1988. It included major events such as the mistaken Iraqi Exocet missile attack on the USS Stark (FFG-31); the deliberate Iranian mining of the first U.S.-escorted Earnest Will convoy and of the USS Samuel B. Roberts (FFG-58); the significant U.S.-versus-Iran surface and air actions (the capture of the Iranian minelayer Iran Ajr and operations Nimble Archer and Praying Mantis); and the accidental shoot down of an Iranian passenger jet by USS Vincennes (CG-49). (For in-depth coverage, please see the first and second parts of this reprise.)

There is a large cemetery in the Iranian capital of Tehran, which includes the grave of the Ayatollah Khomeini, with a very large section devoted to the many thousands of "martyrs" of the Iran-Iraq War. Within that cemetery is also a section and monument dedicated to those Islamic Republic of Iran Navy (IRIN) and Iranian Revolutionary Guard Corps Navy (IRGCN) officers and crewmen who were lost in action against the U.S. Navy during Operation Praying Mantis in April 1988. Atop the monument is a sculpture of the IRIN missile boat Joshan, sunk by U.S. Navy missile and gunfire during Praying Mantis. The Iranians use the monument as an inspirational example of an Iranian ship commander who went into battle against overwhelming odds and chose to fight bravely rather than to flee. Some would argue that the skipper of Joshan was foolhardy in ignoring repeated US.S. Navy warnings to turn away or be fired upon. However, despite the U.S. threats, the skipper of Joshan continued undaunted with his assigned mission, stating that he was operating in international waters with every right to be there (a right that the United States regularly asserts for ourselves) and that he would take no provocative action. And, in fact, even when Joshan came within range of its one Harpoon anti-ship missile (provided to Iran by the United States before the 1979 revolution), Joshan's skipper maintained discipline and did not fire. Only when there was no doubt that the U.S. surface action group was about to fire on him did the he seize the initiative and take the first shot, which luckily missed—barely. My point is that although neither the IRIN or IRGCN are ten feet tall, they are both capable of showing considerable courage, determination, willingness to sacrifice for the mission, and initiative, and the fact the Harpoon was still operational was a testament to Iranian ingenuity—which they also displayed in the mining of Bridgeton and Samuel B. Roberts.

The Iranians also don't quit. Time after time the Iraqis had the Iranians on the ropes, but like Rocky Balboa, the Iranians wouldn't stay down and kept coming back for more. In response to the Iraqi invasion, the Iranian counterattacks (after the regular Iranian army had been decimated) were led by young boys clearing the way through minefields with their feet and bodies, followed by human-wave attacks that were shot, shelled, bombed, gassed, and slaughtered by the thousands. Yet, still the Iranians kept coming, pushing the better-equipped and trained Iraqi army back into Iraq and then some. For over eight years, the Iranians fought on against the odds, and they would have continued were it not for the shoot down of the Iranian airliner by Vincennes that convinced the Ayatollah Khomeini that the United States was intervening militarily on the side of Iraq. Like Emperor Hirohito in Japan at the end of World War II, only the Ayatollah had the real and moral authority to call a halt to the bloodshed. It should be noted that although there are many Iranians who are fed up with the current clerical revolutionary regime, in a country of 83 million there are still many millions who would willingly sacrifice their lives for that regime. It should also be noted that Iran has conducted attacks in unexpected places (Israeli embassy and Jewish community center attacks in Argentina in 1992 and 1994 respectively, as well as in London, in retaliation for Israeli operations in South Lebanon). There is no quick and easy solution to the Iranian problem.

Both the IRIN and IRGCN are significantly more capable and professional today than they were in the 1980s, with a midget submarine/torpedo capability almost the same as the North Korean midget submarine that sank the South Korean corvette Cheonan in 2010. On the internet today you can find stories about the Iranian navy's "losing streak" that make it sound like taking on the Iranians will be another "cake walk." However, in any conflict with Iran, a healthy respect for the adversary should be in order. At this point, I will resist the temptation to be an intelligence officer again and will just commend the Office of Naval Intelligence unclassified study on the Iranian Navy. (It's 29 MB, so I wouldn't recommend opening the file on a phone).