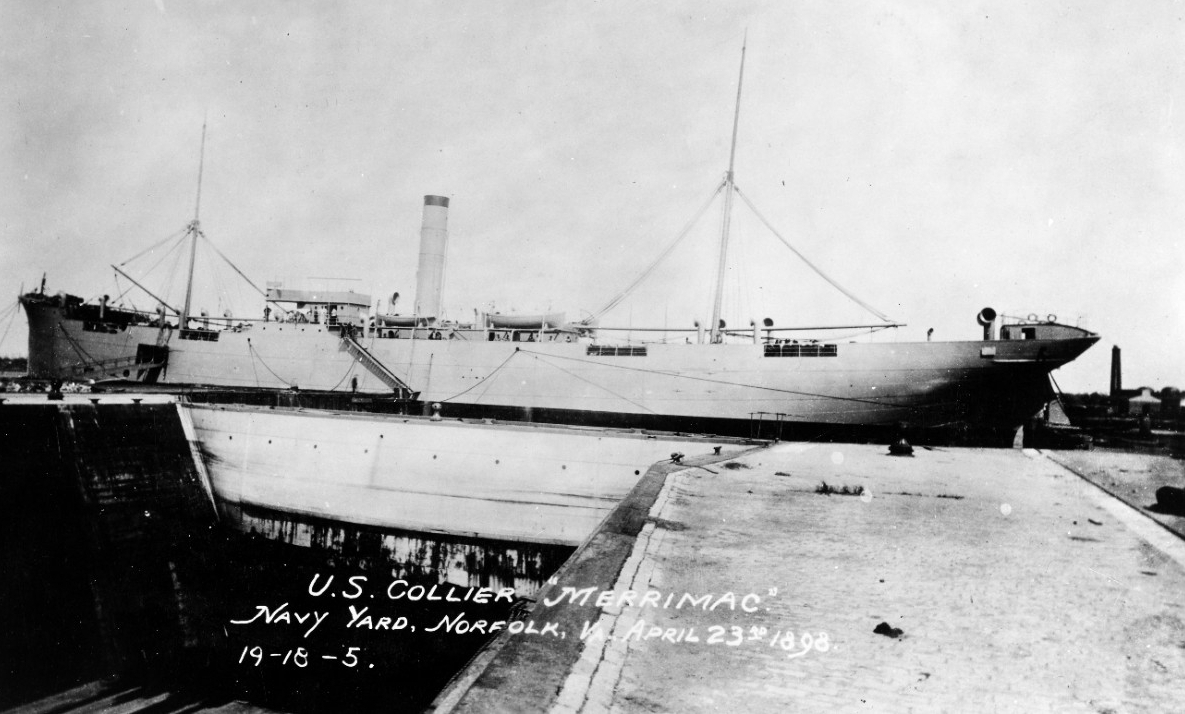 On the night of 2–3 June 1898, the old collier USS Merrimac, under the command of Lieutenant Richmond P. Hobson and with a volunteer crew of seven, steamed into the entrance to Santiago de Cuba and attempted to scuttle herself in the channel to block the Spanish squadron in port—under the orders of Rear Admiral William T. Sampson. However, alert Spanish shore batteries opened heavy fire and disabled Merrimac’s steering gear, leaving the ship and her crew adrift in the channel until she came in range of the Spanish ships in the harbor. These shelled Merrimac before she was sunk—probably by a torpedo fired from Plutón. Unfortunately, Merrimac did not sink in a spot that would effectively block the channel. Somewhat miraculously, Merrimac’s entire crew survived. Admiral Cervera personally motored out and picked up Lieutenant Hobson and his crew, and treated them with great chivalry. Merrimac was the only U.S. Navy ship sunk during the war. (A makeshift raft used by Lieutenant Hobson and his crew—which, by chance, I happened to notice yesterday—is hanging from the ceiling in the National Museum of the U.S. Navy.)

While the Spanish held the crew as prisoners of war, U.S. newspapers wrote about the ship’s “suicide mission”; the men were idolized as national heroes before they even went home to a “rock star” welcome when they were released after the Battle of Santiago. All seven crewmen were awarded the Medal of Honor—the only case I know in which the entire crew of a ship received the medal. Hobson was the only naval officer to receive the Medal of Honor—in 1933, for some reason—for action in the Spanish-American War. In the aftermath of the war, Hobson’s hero status rivaled that of Admiral Dewey: He dined with President McKinley, was swamped with speaking engagements, and became known as “the most kissed man in America,” as ladies everywhere swooned. Hobson would go on to a political career as a U.S. congressman from Alabama, where he would be the only congressman from the South to vote for the Women’s Suffrage Bill of 1915 (which didn’t pass) and he would later become known as the “Father of American Prohibition.” In fact, he had been ostracized by his classmates at the U.S. Naval Academy (Class of 1889) because of his total refusal to drink alcohol or smoke tobacco, yet still finished first in his class. And, in a little more trivia, famous inventor Nikola Tesla was the best man at Hobson’s wedding in 1905. The destroyer USS Hobson (DD-464) was named in his honor, earning six battle stars— including D-Day at Normandy and Okinawa—before being sunk in a collision with the carrier USS Wasp (CV-18) on the night of 22 April 1952, with the loss of 176 of her crew.